WRANGLER JIM FIXES A SECONDARY PROBLEM WITH OUR RIG TODAY 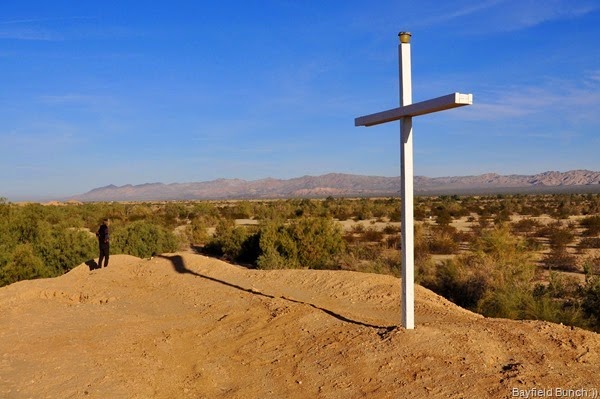 Oh how nice it was waking up feeling well again this morning.  That food poisoning thing is a nasty bit of business.  Fortunately it was of short duration but it sure messed me up for a 24 hour period.  Knew I was fine when I was able to resume my usual peanut butter & honey sandwich breakfast this morning.  I guess one has to get sick every once & awhile just to remind one’s self how great life feels not to be sick. 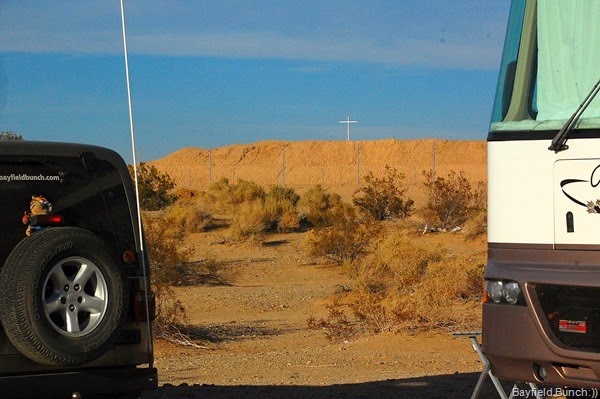 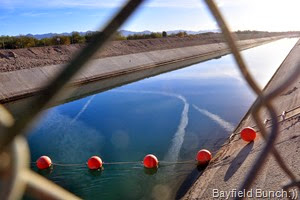 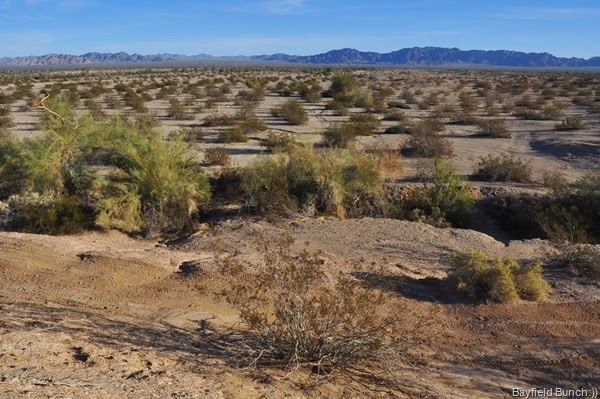 SPOTTED THIS APACHE HELICOPTER OVER ONE OF THE ARMY BASIS

The day dawned cloudy Friday morning with a 20% chance of rain & we did get that 20%.  Nice to hear rain pitter pattering on the roof.  Only lasted 10 minutes just long enough to freshen up the desert a bit but not enough to turn the deserts gray dusty looking shrubbery to a vibrant healthy green.  Much drier here in this area than our Saguaro filled Sonoran desert back in Congress. 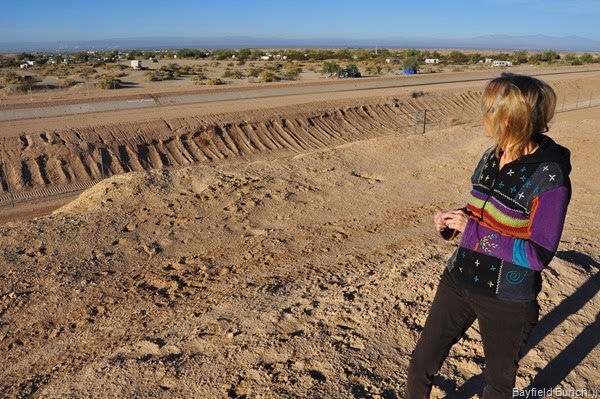 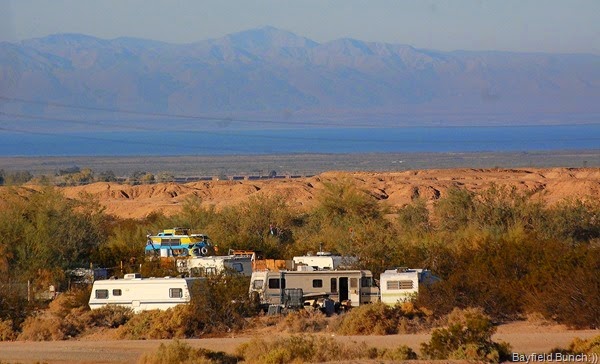 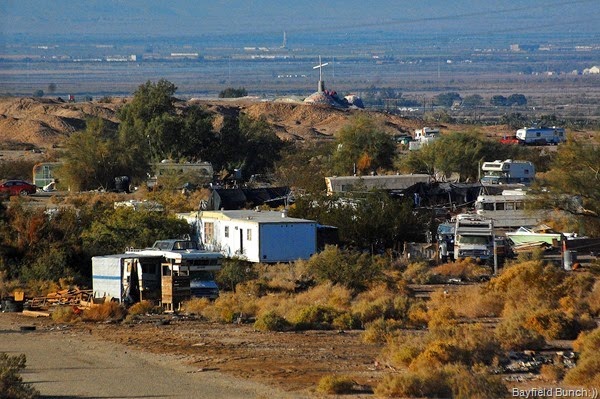 Kelly’s little clip-on FITBIT device says we walked over 4,000 steps on our morning walk which equates to about 2 miles.  We are located right next to the water canal which in turn borders on military land so we have lots of room to walk without meeting other walkers or having to walk in any of the Slabs neighborhoods.  If we think we have a lot of barking dogs in our Congress neighborhood we sure don’t have anything over the slabs.  I think there are more dogs here than Slabbers.  We did hear there is a dog problem.  No kidding……… 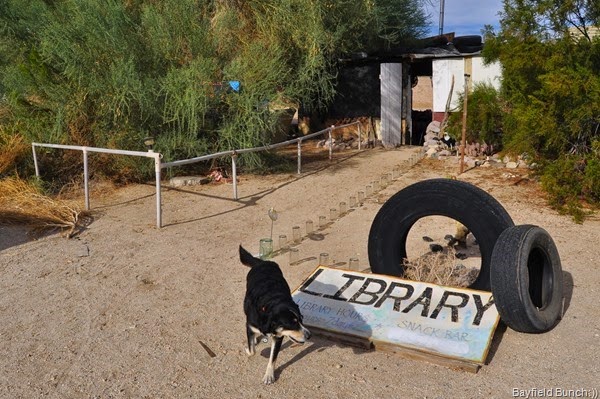 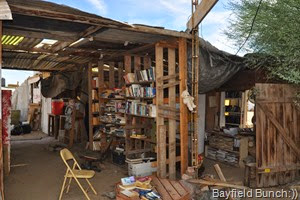 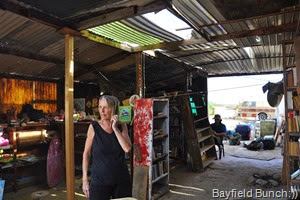 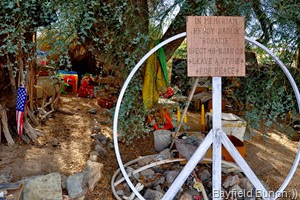 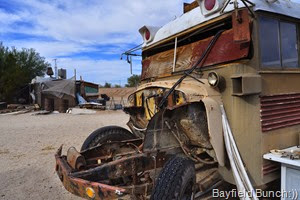 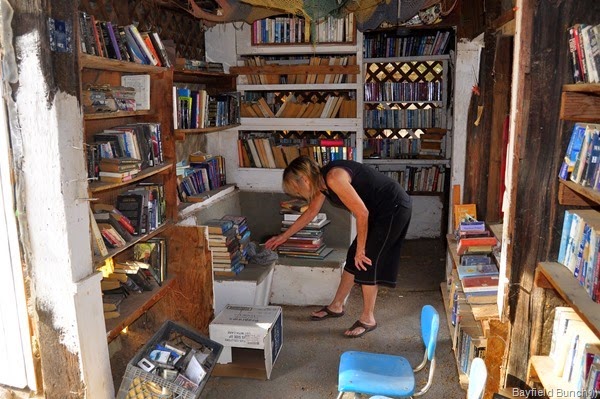 KELLY RUMMAGES THROUGH A FEW OF THE MANY BOOKS BUT WITH THE ROOF IN A BAD STATE OF DISREPAIR IT IS ONLY A MATTER OF TIME UNTIL THE MONSOON RAINS & DESERT WINDS DESTROY IT ALL…ANY FREE SPIRITED NOMADS OUT THERE LOOKING FOR A PLACE TO LIVE & PURPOSE CAN MAKE THEIR WAY TO THE SLABS, PARK THEIR RIG BESIDE THE LIBRARY & BECOME IT’S CARETAKER.  THE LIBRARY NEEDS YOUR TLC:))

We have another coach problem I hadn’t mentioned earlier.  Doing a lights check before leaving Congress last Monday morning I noticed we had no turn signals or four way flashers.  Decision was do we try to get this fixed before heading out or do we go with no turn signals.  Knowing the non heavy traffic route we would be taking to the Slabs I decided to go with no turn signals.  Not knowing if the problem was related to our inverter woes, a worn out part in the signal assembly or possibly a pack rat chewing a wire somewhere I knew it was nothing we had the expertise to fix.  Enter Wrangler Jim from Alberta Canada. 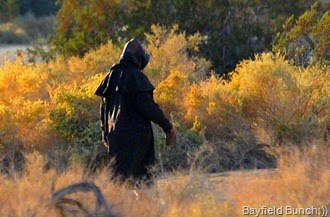 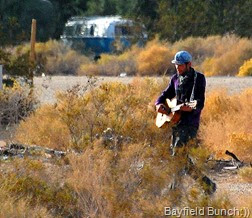 Friday while I was sick Kelly had driven over to Solar Mike’s to get the UPS tracking number for our inverter.  On the way back she drove around a bit looking for maybe a shadier spot for us.  Stopped up in the Canadian section to have a look at a place beside some larger ?? trees.  Got talking to a fellow Canadian Snow Bird fellow living in a renovated bus there.  Turns out Wrangler Jim is a full blown mechanic who once operated a 4 bay garage in Strathmore Alberta.  He still lives in a Strathmore RV Park during the summer.  He sold his house, garage, & whatever else & hit the road back in 2007 in his now 45 year old bus.  Been coming to the Slabs since 1995.  Said he’d come over & have a look at our turn signal problem & this morning he did just that. 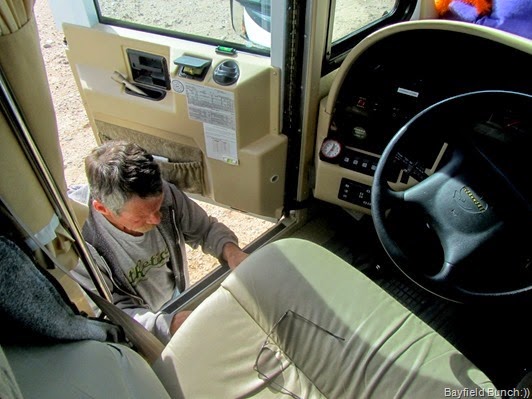 As anyone knows electrical problems in vehicles can be a nightmare unto themselves but throw a another few hundred feet of wiring into the mix & the problem can quickly become one’s very much most worst nightmare of ever.  Wrangler Jim brought his testing device & quickly ruled out a fuse problem anywhere.  He next suspected a turn signal relay switch but here’s where the problem came in.  Where was the relay switch.  Normally located under the dash in the vicinity of the steering column it turned out to be quite a chore for Jim in locating it in the mass & maze of spaghetti tangled wires.  Nothing resembling a relay switch was visible anywhere.  Then we caught a break.  Jim had crawled back out from under the dash contemplating his next move when out of curiosity I reached over & depressed the 4 way flasher hazard switch & it started clicking.  No lights but we had clicking & that was all Jim needed to crawl back under the dash & track down where that relay switch sound was coming from.  Took him awhile to get his hands through the maze of wiring but at last he was able to locate it & pull it out.  He had brought a new relay switch with him just in case & sure enough when he plugged that new relay switch in we again had our 4 flashers back plus our turn signals were working again.  He had just picked that switch up in Canada before heading down to the Slabs this year.  Tomorrow we will probably head on down to Walmart in Brawley & pick him up another relay switch at the Auto Zone.  Yes they’re open Sundays.  Talk about a lucky break in finding a full fledged mechanic parked nearby. 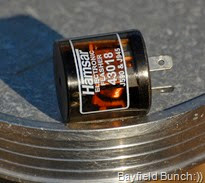 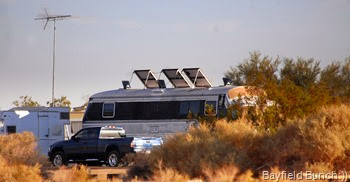 Took ourselves for a little drive around the Slabs this afternoon.  I won’t attempt to explain the Slabs but if you go to the search gadget at the very top of our right hand column & type in Slab City it will bring up my posts from previous times here.  I have thoughts there & plenty of photos.  Seems I always have plenty of photos doesn’t it. 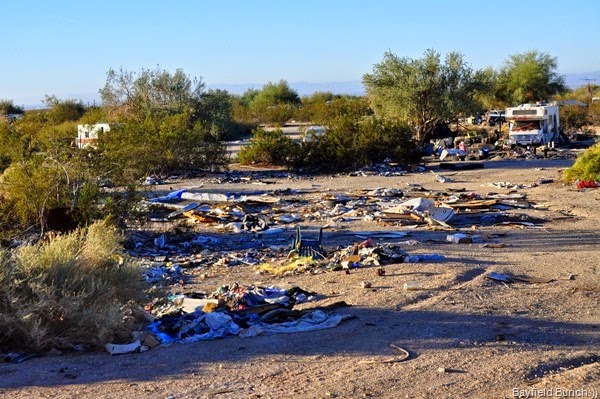 GROANER’S CORNER:(( Manning the computer help desk for the local school district was my first job. And though I was just an intern, I took the job very seriously. But not every caller took me seriously.  "Can I talk to a real person?" a caller asked.  "I am real," I said.
"Oh, I'm sorry," the caller said. "That was rude of me. What I meant to say was, could I talk to someone who actually knows something?"

The preacher was having a heart-to-heart talk with a backslider of his flock, whose drinking of moonshine invariably led to quarreling with his neighbors, and occasional shotgun blasts at some of them.  "Can't you see, Ben," intoned the parson, "that not one good thing comes out of this drinking?"  "Well, I sort of disagree there," replied the backslider. "It makes me miss the folks I’m shootin at."