AL’S TURN TO HAVE A ROUGH NIGHT 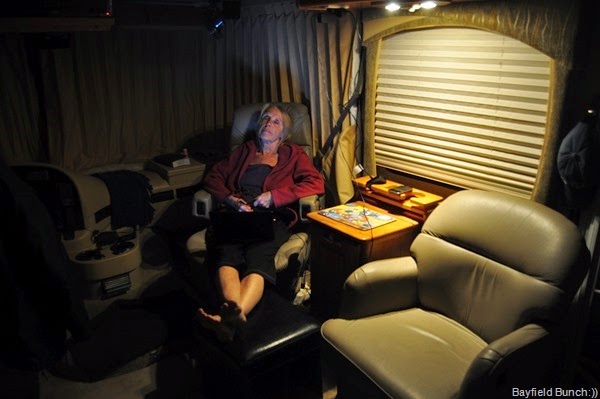 A RELAXING NIGHT AT OUR HOUSE

About an hour after eating supper Thursday night I began feeling sick to my stomach.  It continued to get worse as the night wore on.  Kelly had saved the Fajita from Del-Taco she didn’t eat Wednesday & that is what I had for supper.  I’m guessing something in that Fajita was the culprit.  By 9:30 I was outside throwing up in the desert.  No way I could sleep so tossed & turned aimlessly feeling very sick.  At 2:30 in the morning I was outside again & threw up everything but the kitchen sink.  Sickest I have been for many years.  Not much sleep all night & I never got out of my bed until 10 this morning.  Longest I’ve stayed in bed since I was a teen ager I think.  My whole body ached including my skin.  I was back in bed by 11 & just kind of laid around for the rest of the day.  At the time of writing this tonight I am finally feeling a bit better & I think with a good night’s sleep I’ll be back in the game again sometime Saturday. 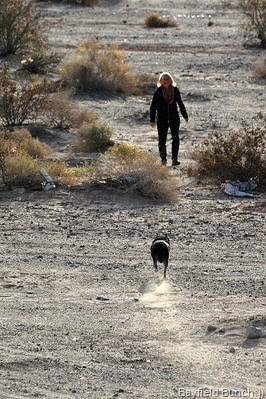 Looks like we are gonna be here awhile.  Our inverter is on a UPS truck somewhere & has not arrived at it’s destination at TEMECULA VALLEY RV in Murietta California yet.  Geeeezzzz, it’s only 300 miles from here.  Kelly’s been in touch with Temecula RV & they said they probably will not get it until Monday now as UPS doesn’t drop off on Saturdays.   And they said they are already backed up.  In hindsight we could have just driven the inverter over there ourselves.  But it is what it is now. AT HER COMPUTER STATION TALKING TO TEMECULA RV THIS AFTERNOON

Kelly noticed on Facebook another 8 years + Fulltiming RV couple has just made the same decision as Jo & Fred Wishnie made.  And like Jo & Fred they made the decision rather quickly.  Popular RV couple Ellie & Jim Meachum who we have also met have just bought a place in North Ranch which is just a few miles south of Congress Az.  And like the Wishnies they are pretty excited about moving into their new digs.  I well remember our excitement a couple years ago when we bought our place in Congress. SUNSET AT THE SLABS (no that’s not our rig)

GROANER’S CORNER:(( This guy dies and finds himself in a small room. It looks kind of like a living room from the Andy Griffith show, and has a couch and TV set in it. There's another fellow sitting on the couch watching TV. The newly dead guy looks around and asks, "so... is this heaven or hell?"  The other guy looks up and says, "Well, there's no windows or doors, and no apparent way out."  "Oh," says the first guy. "So it's hell."  "Well," says the other guy, without looking up from the screen, "but they did give us this nice big TV set."  "I see. So maybe it's heaven."  "Yeah, but the TV has only one channel."  "Oh, so maybe it's hell?"  "Well, but the TV station it gets is pretty good -- it's PBS."  "Oh, so maybe it is heaven after all?"  "Yeah, except for just one thing..." the other fellow says, sadly.  "It's ALWAYS pledge week."