MOST BEST THING ABOUT TODAY WAS SOME COOLER AIR LATER ON 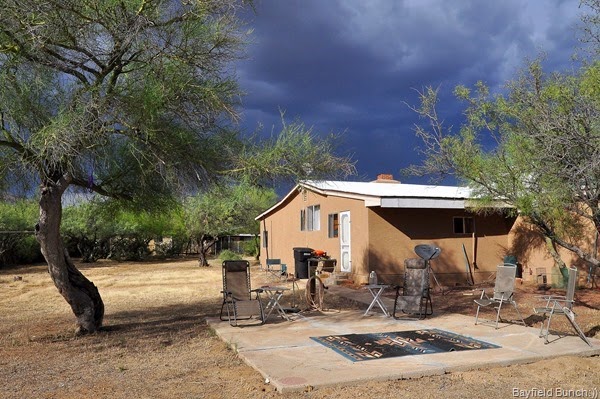 I did today just what I said I didn’t like doing just a few short posts ago.  I sat in the house all day watching television.  I have a little green fan I carry around with me & plug it in beside my recliner or my computer chair to keep cool.  No A/C in the house & no A/C in the Jeep so our activities for right now are limited. 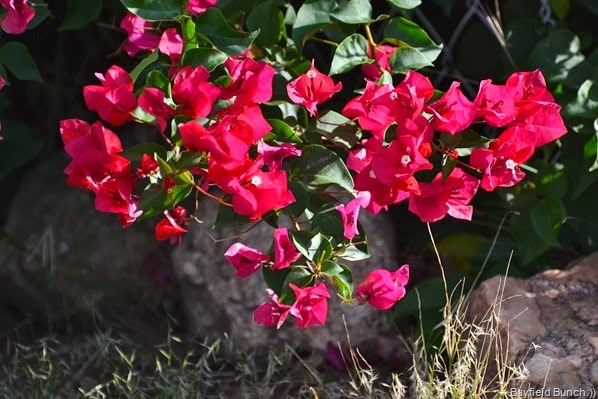 Skies darkened to the North as thunder rumbled down off the Date Creek Mountains tumbling out across the late afternoon desert floor.   Said to Kelly while eating supper I didn’t think it was going to rain.  Five minutes later as my Spaghetti sat cooling on my plate I was outside in the rain hastily closing windows & moving things back on our front porch.  The lite rain brought a welcoming cool breeze with it so being out in the rain for a few minutes was pleasurable.  By the time I had windows up & things covered the rain had stopped & the Sun was out.  But thankfully the air remained cooler for the rest of the day into evening & I actually did get out for a bit after supper to do a couple things. 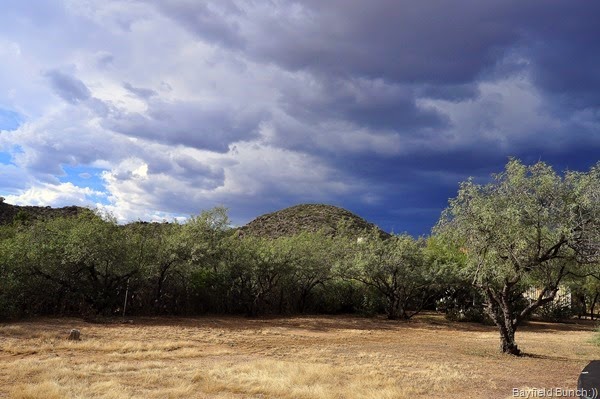 I THINK OUR BACK YARD MIGHT WELCOME A LITTLE RAIN 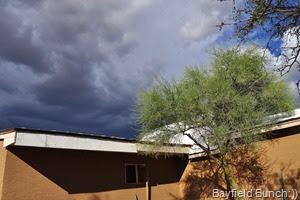 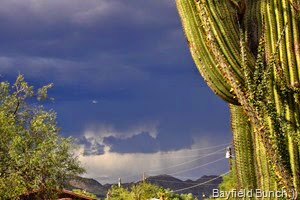 Our good neighbor Lou lent us a cage this morning to try & catch our Skunk.  Said if we could catch it he would take it away for us so we’ll give that a whirl tonight.  I just hope we do not have more than one Skunk.  Last year it was 3. 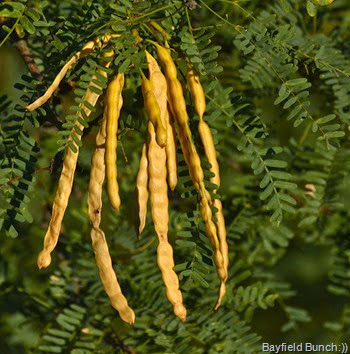 <<< LOTS OF MESQUITE BEANS ON THE TREES THIS YEAR

I too always thought those big rear width wide mud flaps would be a good thing to have on an RV.  Just seemed to make sense they would stop a lot of stones flying up.  Never gave it a second thought.  After the damage to our Jeep I had to re-access my thoughts & it was a reader who gave me the clue to what actually happened & why.  As I sat under the Motorhome face to face with that big mud flap Saturday afternoon before taking it off it became crystal clear to me exactly what had happened & that is what I wrote about in Saturday’s post.  Not a shred of doubt in my mind.  Simon, an RV friend of ours from Ottawa sent us an email saying he had looked at some photos of our mud flap placement on the rig & said it was in the wrong place.  Ours was placed just behind the rear wheels.  Simon felt it should have been placed further back under the bumper.  I think he’s right & I will not be putting that road sweeping heavy duty rubber one piece wind dragging mud flap on the RV ever again.  Lesson learned!!  Simon & Sandy have a Class A Triple E as well.

ONE OF THE NOISY DOGGY GANGS ON OUR MORNING WALK

Happy to say by a lucky fluke our internet reception has improved.  We couldn’t even get on this morning so Kelly in desperation moved the Verizon/Millenicom Jet Pack to an Eastern facing window & Walla our internet signal substantially improved.  Has worked well all day so far & we are keeping our fingers crossed. 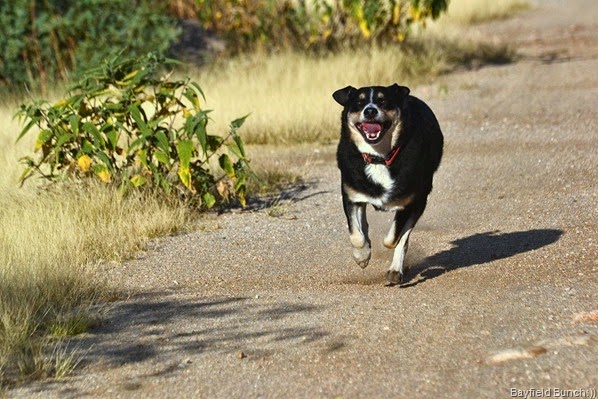 AND PHEEBS IS LOVING HER DESERT RUNS AGAIN

GROANER’S CORNER:((  I feel like my body has gotten totally out of shape, so I got my doctor's permission to join a fitness club and start exercising. I decided to take an aerobics class for seniors. I bent, twisted, gyrated, jumped up and down, and perspired for an hour. But, by the time I got my leotards on, the class was over.