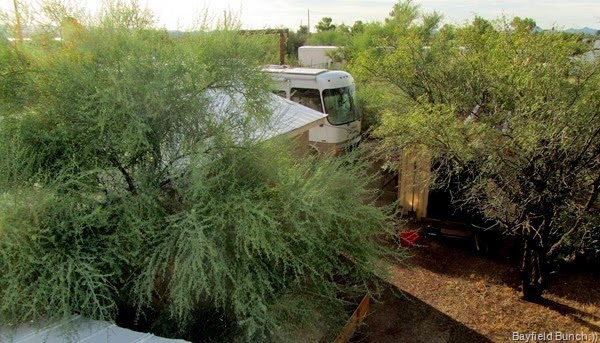 Tuesday was a lost day for us but with a good night’s sleep we were able to hit the deck running this morning.  With all the little set backs we’ve been having I knew we needed to somehow turn things around.  For me I knew I had to get a few accomplishments under my belt.  Passed on our morning walk & started right in with the Jeep. 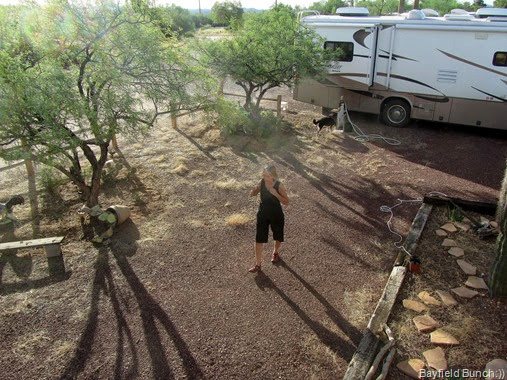 Knowing by 9:30 it was going to be too hot for me I was outside at 6 with brush & hose in hand washing all the road grime off the Jeep in the cool pre-dawn Arizona air .  Cool works best for me.  Fortunately we had a high thin cloud cover today taking a bit of the heat bite out of the sun’s rays.  Lifted my Spirits to see the Jeep all clean again.  Not losing any precious momentum I fired up the rig & moved it to it’s RV spot at the south end of our house.  Sun was getting up but knew I could at least get the North & West sides of the Motorhome washed.  (Passenger side & front end)  That took me awhile but again my Spirits soared as I saw the nice shine re-appearing from under all that road grime.  Guess I have to eat my previous words saying I’m not into shiny vehicles anymore.  I sure was this morning:)) 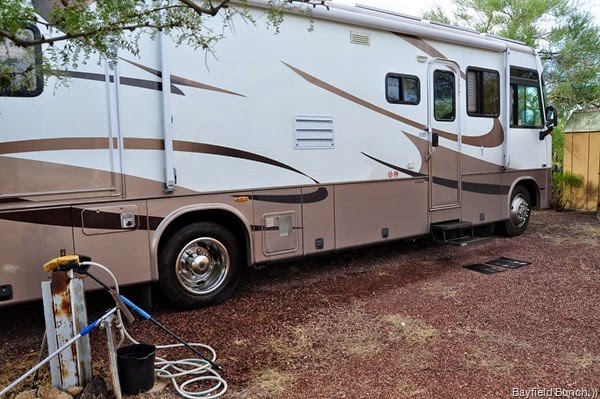 REAR HALF IS WASHED, FRONT HALF ISN’T

In the meantime Kelly was on the phone regarding our Internet problem.  When I moved the rig we noticed we had a weak internet signal with the antennae on the rig’s roof.  We have a metal roof on our house so figured why not put the small magnetic Wilson Sleek antennae on the roof.  I don’t do ladders & roofs anymore but it was the only way we were going to get the antennae up there.  Grabbed our stretchable aluminum ladder, shoved my ladder fear in my back pocket & up I went.  I have no fear of heights, only climbing back on a shaky ladder to climb down.  Set up the magnetic antennae, Kelly plugged the other end into our Wilson Sleek below & Walla we had a steady internet connection.  Not fast but good enough to work for us.  Took a few photos from the roof with my Canon ‘Point & Shoot’ while up there.  Kelly stood on the bottom wrung of the ladder to steady it & I successfully made the transition from roof to ladder & came down. 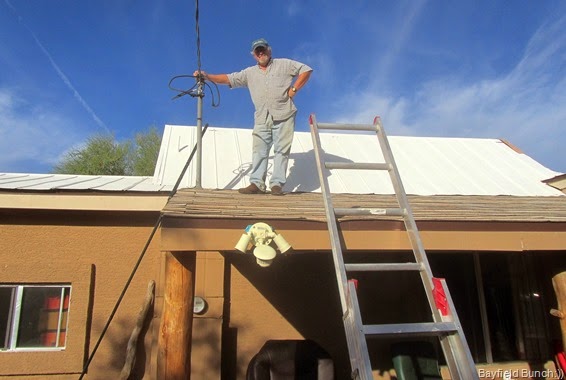 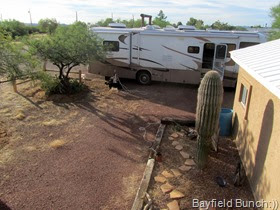 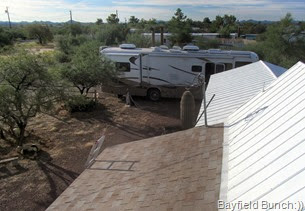 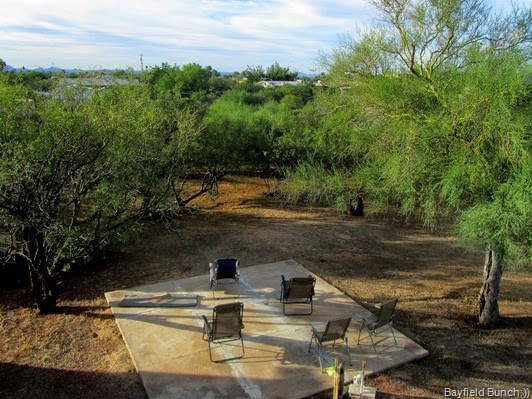 Last winter we had a bit of electrical work done by a young fella Les (our gardening guy) had recommended.  We were pleased with Wendell’s work & fair price.  Kelly had called Wendell Tuesday night about our current electrical problem.  Wendell came over this morning.  Probably took him an hour to finally track down the source of our power outage Tuesday night.  A bare chewed wire in the attic touching a nail.  Wendell put in a new section of wire & we were good to go. 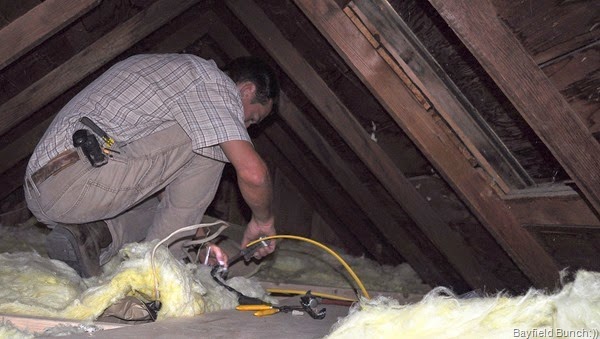 WENDELL REPAIRS SOME WIRING IN THE ATTIC ABOVE OUR DINING ROOM

In the meantime again Kelly had been on the phone with the makers of our rig’s Magnum inverter, MAGNUM ENERGY.  They needed some voltage information about the inverter & Wendell was able to test it & acquire that info which Kelly relayed back (via phone) to the tech in Phoenix.  They are pretty sure they know what the problem is.  Something to do with a FET board or control module inside the inverter.  Good news is we probably do not need a new converter, just a new board.  Magnum’s approved authorized service facility is DIVINE COACH CARE which is located in Phoenix just west of the Airport.  When we’re ready we will drive the rig there & have them fix that board.  Fellow on the phone said it was too bad we were not the original owners because it would have come  under warranty.  Looks like it will cost us in the neighborhood of either $400 for a FET problem or $250 for a control module problem.  That’s a big difference from the diagnosis & price we got from that Northway RV dealership place just west of Sturgis SD.  They said our inverter was toast & wanted $2,600 plus labor to fix it!! 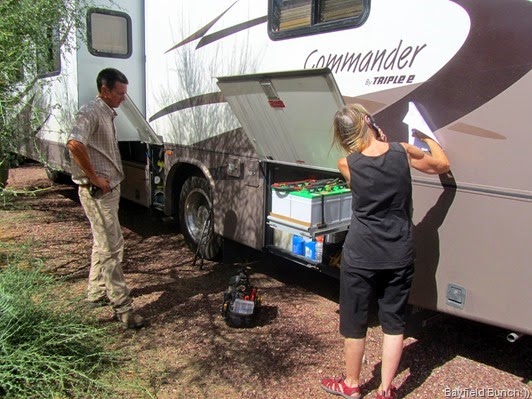 We’re in no big hurry to have the rig’s inverter problem fixed right now so will just spend the next month or so right here at home in Congress relaxing & enjoying our desert surroundings.  We’ll get the Congress garage to throw a couple new headlights in the Jeep & we’ll be ready to rumble.  Wendell gave us a recommendation for a place to get the Jeep’s windshield replaced as well.  And I’m thinking maybe I’ll just get a couple fog light covers for those broken bumper mounted fog lights.  I have never used those lights anyway. 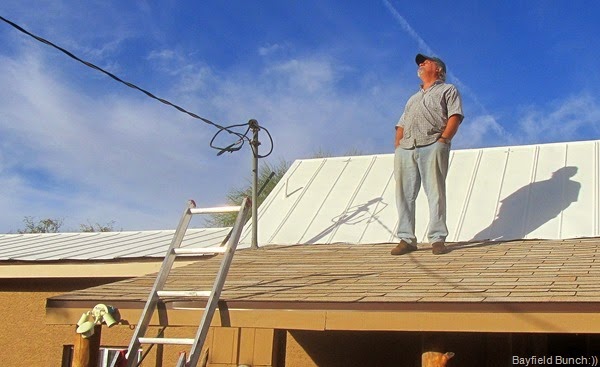 We wisely chose to coast through the afternoon.  Caught myself another episode of Corner Gas at 1 o’clock & what now makes it more interesting for me is seeing the actual set where we were one week ago today.  Our television satellite is Shaw so much of our programming is Canadian…My sore throat has cleared up & it did not turn into the expected usual full blown cold.  I think the reason I was so fatigued Tuesday was due to the fact my body was using up all my energy resources to fight off the cold.  And it worked.  And Kelly wasn’t coughing as much today either………Thanks to everyone for your concerns & ‘welcome backs’     :)) 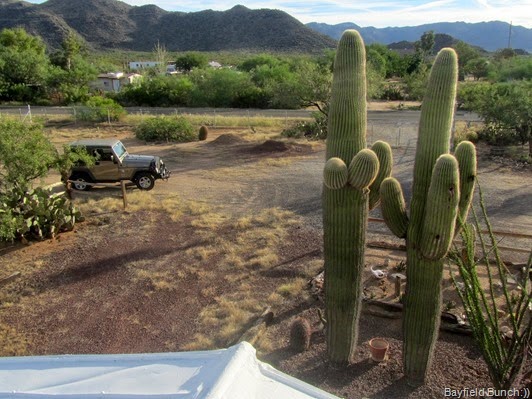 OUR FRONT YARD WITH THE WEAVER MOUNTAINS ON THE DISTANT HORIZON

GROANER’S CORNER:((   History Teacher: "Why was George Washington standing in the bow of the boat as the army crossed the Delaware?"
Student: "Because he knew if he sat down, he would have to row."