SO ANYWAY THAT’S PART OF MY THEORY:)) 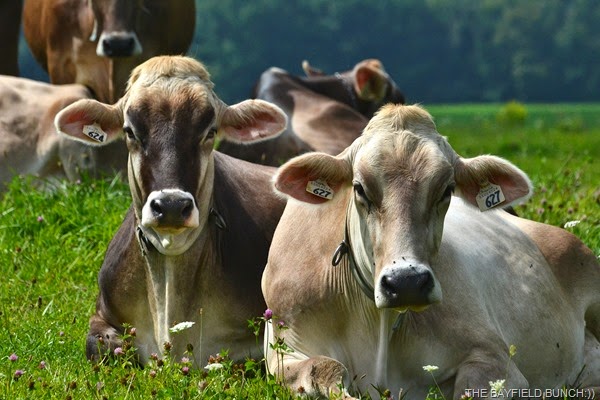 Weather channel called for clearing skies overnight & to just double check that I had me a look up through the Pine trees Saturday night before going to bed.  Sure enough I could see a few twinkling stars.  Didn't take me & little Monkey Buns long to hustle ourselves out into the countryside again Sunday morning.  Picked up a coffee & carrot muffin at McDonald's in Goderich on our way through.  About 4 hours later we split a hamburger in Seaforth Ontario.  In between the muffin & the burg we just moseyed along enjoying the cool sunny morning.  A few photos here & there & a few stops to stretch our legs along the way. 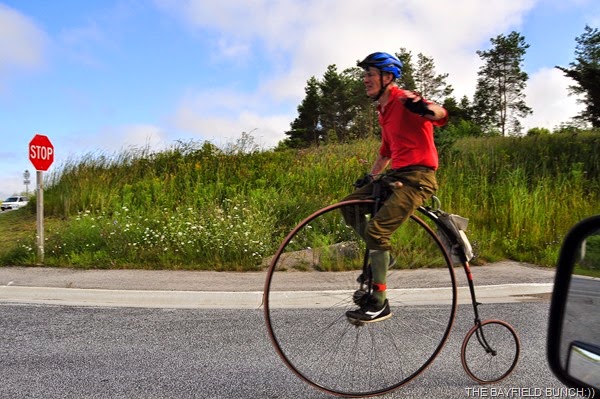 Aside from the obvious reasons I have stated many times for our country drives there is another one I may not have touched on.  It's one that some folks may not understand & other folks may just smile & give their heads a little nod knowing exactly what I am talking about.  For me personally I need my alone times & I do think it's important for couples to give each other their space.  I know some couples seem to be quite content with being together 24/7 & if that works, why not.  Some folks like full timers may not have a choice & I'm sure things must get a little testy at times being together in that smaller space day after day.  These people are to be admired for their patience & perseverance & I do think it takes two exceptionally understanding people to have the stamina to do that.  It was one of the things that bothered me a bit when we considered full timing back in 2008.  I know full timing would be easier for me if I were doing it alone.  The problem we have here is me not Kelly.  She has the patience of Saint & I have the patience of a Gnat & that in a nutshell is another reason for my country drives.  I need those X number of hours a week to just get out & enjoy being by myself & I'm sure Kelly enjoys those same X hours a week not having me grumbling around the house.  Now that she is not working at Deer Park Lodge any longer she is home much more & I try to be considerate of that & give her the space she needs as well.  Pheebs & I have been slipping out 2 & sometimes 3 times a week for about 4 hours at a time & that seems to be keeping me on a somewhat even keel.  Plus it helps with this ever present restless traveling urge I seem to always carry with me.  Just have to go with whatever works I guess.  So anyway that's part of the theory behind my increased outings this summer.  Right or wrong it’s my story & I’m traveling right along with it………………………..:)) 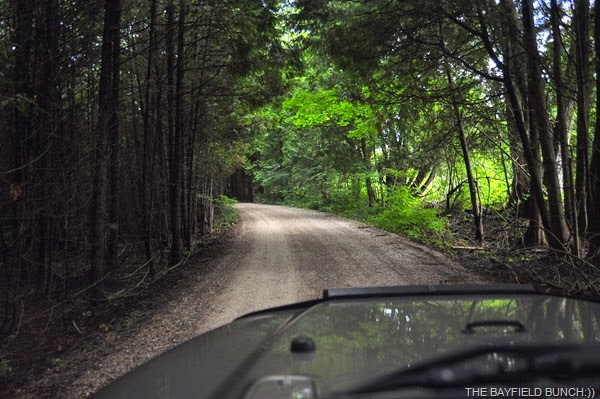 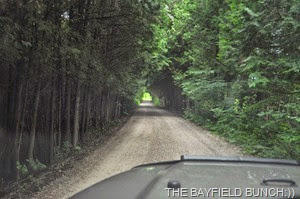 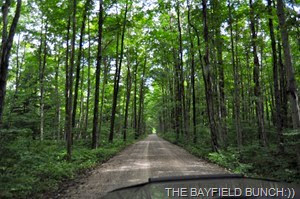 SOME COUNTRY ROADS ARE JUST MORE MYSTERIOUSLY GROOVIER THAN OTHERS

Well I think it was the longest period of time I ever took to read a book but I  have finally finished UFO's......Myths, Conspiracies, And Realities.  As I said before it was a tough slog getting through it.  Very detailed & it tested my shaky memory & limited vocabulary in many places.  In my opinion one of the key ingredients to enjoyable reading is having a keen short term memory, not a shaky one.  A memory which can go back through characters, plot lines & details bringing them all forth to keep the reader in the now as to where he/she is in the books story line.  It's one of those things which makes reading so uniquely interesting.  If I had to stand up & give a book report on the book I just finished all's I would be able to tell you is, yes I do believe in UFO's simply because of all the hard factual data.  And yes, the America Government is the stumbling block when it comes to other countries around the world freely sharing their UFO knowledge & databanks.  Why the UFO's are in our skies no one knows but they are there.  And remember, UFO stands for 'Unidentified Flying Object' & that is just exactly what they are & what people have been & still are seeing.  This book will dispel the common myths, fantasies, fabrications, speculations & just simple common bunk that prevails.  The proof is in the logic……………My next Kindle read begins tonight.  SHAKEY.  It is singer songwriter Neil Young’s Biography.  Kelly & I once saw Neil Young play the old CNE Stadium in Toronto.  His back up band for the concert was Booker T & the MG’s. (Green Onions early 60’s)  Think it was back in the mid 90’s when we saw him.  We swayed in our seats to his ever melodic song which was popular at the time, ‘Harvest Moon’.  Incidentally that song became ♫ OUR SONG ♫ & holds a very special place in my heart….…:)) 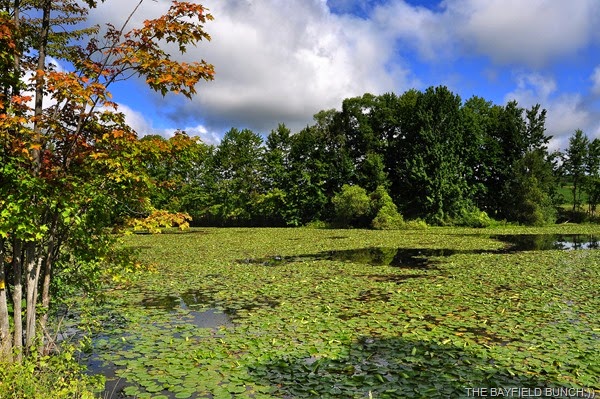 Ever wonder why it is not a good idea to put your rig's levellers down in a parking lot.  Slip on over to Barbara's latest post at ME AND MY DOG.....AND MY RV & she will show you what she saw in a Wal-Mart parking lot.  It is inconsiderate people like these who give the rest of us a bad name & it's another reason for some places to ban RV's altogether.  Be considerate & think about what your doing.  And I like the bicycle Rhonda at TURN WHEN THE ROAD DOES recently purchased.  What a great all round idea.  Pedal if you want or just cruise along on battery power.  Groovy.  And talk about a hard working retired RV couple.  Better stop by Sharon's latest post at THE ODD ESSAY.  Just no rest for the weary it seems but Sharon & Bill are happy campers as they voluntarily scamper about working away at a place & things they both enjoy.  Would you believe 45 & 60 hours a week at times……And if you would like to meet Marsha & Paul Weaver this winter just check out their travel itinerary to see if they are coming to a place near you:)) WHERE'S WEAVER 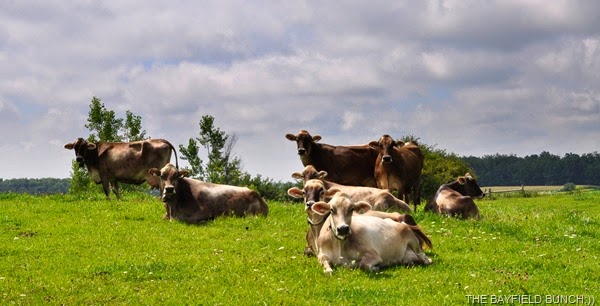 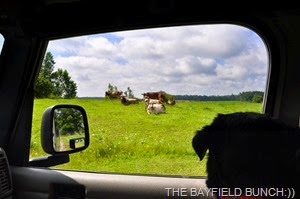 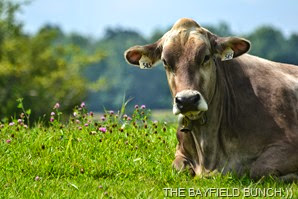 ‘Wow’ I heard my first Autumn Crickets today.  They are right on time with the seasonal mid August change.  Country side is still looking way greener than it usually does this time of year but I’m sure trees will soon be taking on a darker hard edged look before the color change begins to set in.  Really noticing the days shortening up as well.  Kelly & I are off to Citizenship & Immigration in London Ontario in the morning.  Kelly has to re-new her dual citizenship card & is armed with a mountain of required paperwork in order to do so.  She has to do that every five years in order to keep her status current. 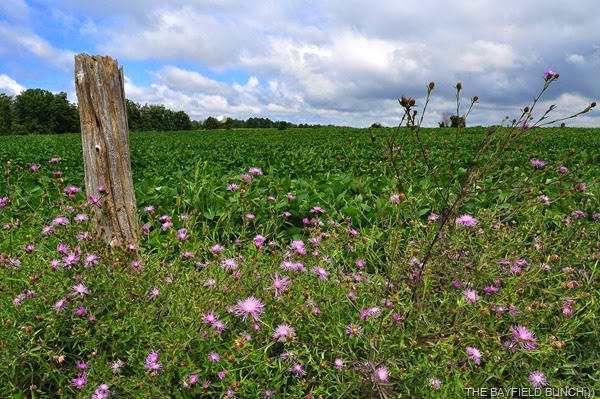 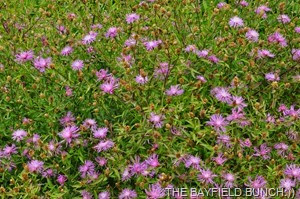 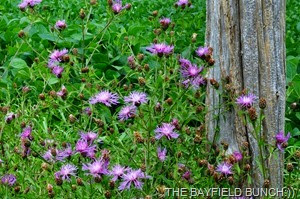 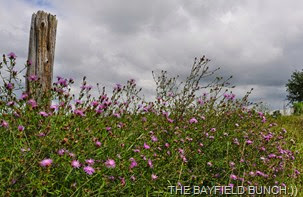 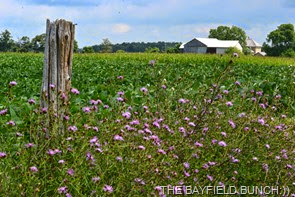 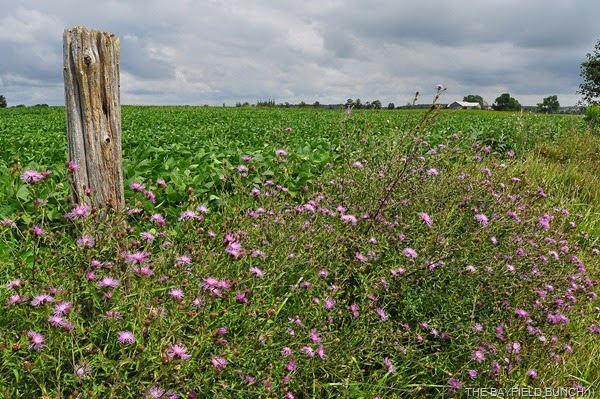 AND IT’S ALL IN HOW ONE LOOKS AT IT

GROANER'S CORNER:(( Frustrated at my attempts to find something suitable for my diminutive daughter to wear that didn't look like something for a child, I approached a rather harried-looking saleswoman.  "What do you have for a petite woman about five feet tall, around 95 to 100 pounds?" I asked.  The short, pleasantly plump clerk looked at me with a rueful smile. "Nothing but contempt," she said.

I decided to put together one of my six-year-old son's model kits one rainy afternoon. I found one of a dinosaur and was looking over the pieces when he passed by.  "What'cha doing, Dad?" he asked.  I told him I was going to put the dinosaur together, but the instructions were missing.  "Well, Dad," he grinned, "I guess you'll just have to do it from memory."