PHEEBE RUNS WITH THE ELK….WELL AT LEAST I THINK THEY’RE ELK

We were a couple a happy campers rolling south in the Sunfire on highway 21 for Grand Bend this morning.  Destination was Ron's FOUR SEASONS PERFORMANCE Auto-Marine-RV.  We had some money to pick up:))  Always nice to see Ron & all that great positive energy he puts out.  The saying, 'if it doesn't rain it pours' sure took on meaning when Ron told us he had 3 separate buyers for the rig on the last day it was for sale before the Grand Bend couple picked it up Wednesday night.  We are so happy to have that Winnebago sale behind us finally.  And a big thanks to Ron for doing all the leg work.  We both said on the way home we hope our Triple E Commander is our last RV.  We don’t need or want any more buying & selling RV stress.  We've had our fill of that this past year & a half.  Hopefully we got it right this time eh..........:)) 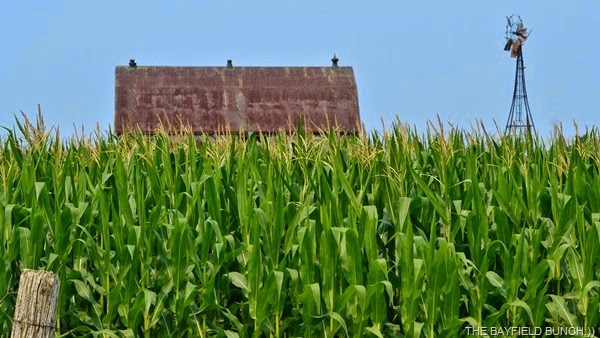 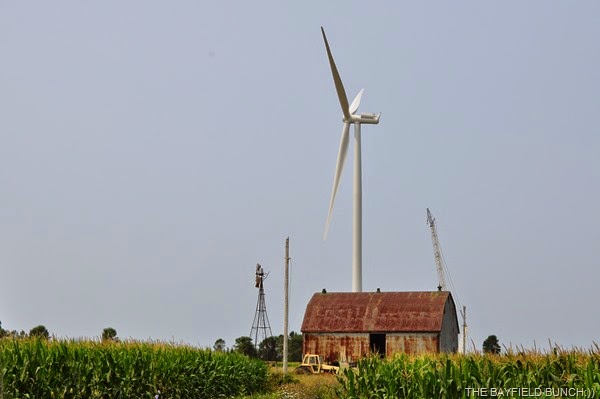 THE OLD & THE NEW

Back to Bayfield & Kelly headed off to a couple Banks in Goderich to deposit some money & pay off a few bills.  Always a nice feeling doing that.  I was curious to see how the wind turbines were coming along so Pheebs & I headed up that way to have us a look.  One of the turbines under construction is close to the road so we stopped beside a bean field for awhile & watched workers assembling the boom of a super big mega crane. 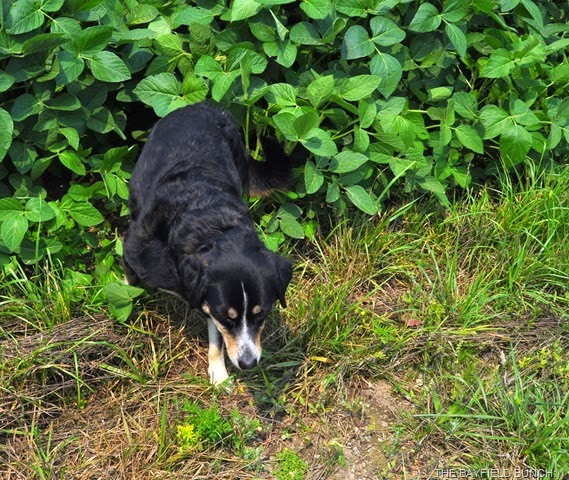 I saw 2 giant red cranes fully assembled in the K2 wind turbine yard last week & wondered at that time how they move those things on site.  Today I found out.  Watched as flat bed trucks each carrying a long crane arm section would arrive on site, position itself in the right spot & wait for a smaller yellow crane to lift off the larger crane section.  The section was then carefully swung into position as 2 workers maneuvered it into place & drove in large steel pins to affix the sections together.  Those guys plus the crane operator sure have to know what they are doing. Watching through binoculars it was interesting to see the hand signals going from one of the workers way back to the crane operator.  Moving tons of hanging steel just inches at a time.  I expect they will have the big mega crane assembled some time next week & it won't be long before they lift up the big propeller assembly to the top of the main tower.  Big crane will be disassembled, moved a quarter mile down the road & reassembled again.  Whewww, makes me tired just thinking of all that work. 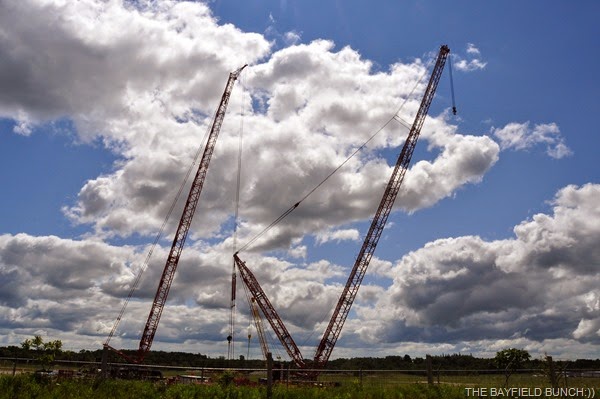 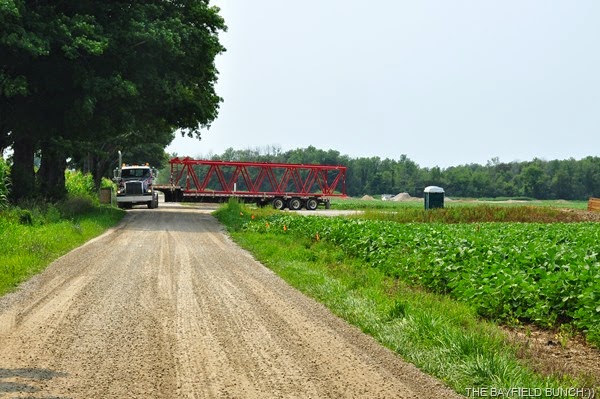 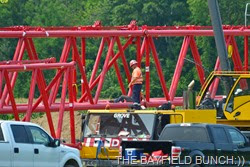 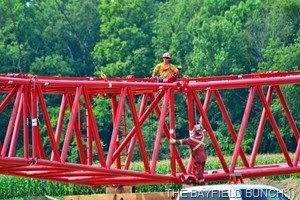 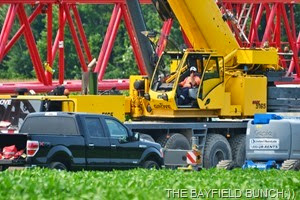 Just up the road from the wind turbine site is the hobby farm with all the different types of animals.  Pheebs likes to stop there & see the Llamas and Alpacas.  Today we spotted half a dozen Elk & were able to pull off the road right up close to them.  Pheebs was going bonkers to get out of the Jeep & say hello.  She raced right over to the fence running around in excited circles.  The Elk right away came to the fence to see her.  Pheebs would race along the fence line at top speed & the Elk ran right alongside her on the other side of the fence.  Pheebs would burn a grass chewing U-turn & head back up along the fence line with the Elk turning sharply & racing back up right beside her.  They all had a fun time together.  I didn't see any smooches going on through the fence but they were pretty close a few times when Pheebs would stop & stick her nose through the fence.  Long time readers will remember all that cow smooching back in late February & early March of 2012 when we were boondocking just just south of NORTH RANCH near Congress Arizona.  And mentioning North Ranch...thanks for that Custer/Congress route Mike:)) 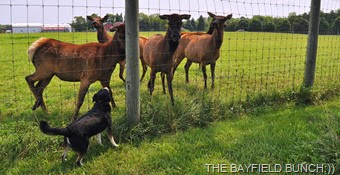 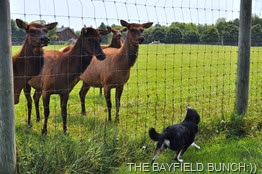 PHEEBS IS SAYING, ‘CATCH ME IF YOU CAN YA BIG TURKEYS’ 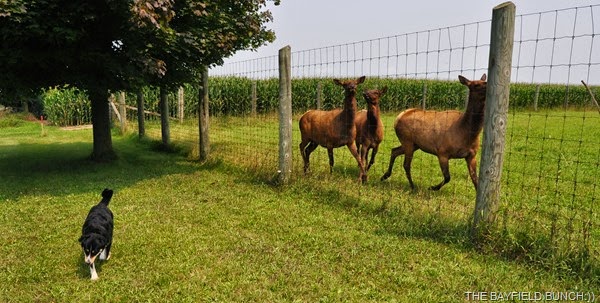 ARCHIVE MEMORY::  Think I wrote this back in 2009 & entitled it 'Numbers On Our RV Bin Doors'……………  I have found that RV storage space & traveling is a good example of theory & practical application.  The trick is in keeping your theory practical.  Coming from a 5th wheel to a motorhome we were overwhelmed by all the extra storage space suddenly available to us.  Seemed like acres & acres of room to lose every imaginable thing you could think of.  I could see right off the bat that the rig had a far bigger capacity for storing things than my brain did.  I knew there was no possible way I was going to ever remember where everything was.  In my younger days I had worked for a few stores like Eatons & Sears in warehouse capacities so knew the importance of inventory, labeling, & organization.  Figured I would put that knowledge to use. First thing I did was to get some of those small sticky-back numbers & starting from the first bin on the passenger side I gave each bin a number from 1 to 13.  Thirteen was the bin closest to the front on the driver's side.  I then got myself a 3 ring binder & began recording everything I put into each bin.  I even inventoried the toolbox so I knew what was inside without having to open it.  I was pretty pleased with myself for being so orderly & my system worked flawlessly............ for about a week!! 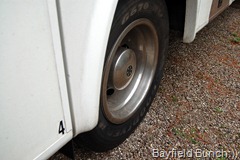 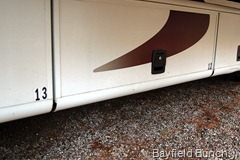 Everything looked well & good sitting at home in the driveway but within a dozen days of traveling my whole inventory was pretty much upside down.  Didn't take me long to forget about making changes to the inventory book as I rearranged things.   Going from a nice neatly organized  stationary bin arrangement in the driveway to the reality of the road with it's many last minute overnight stops, weekly campsites, & monthly stays, it was inevitable I would forget to record the dozens & dozens of changes along the way.  I was already behind the 8 ball after the first week & despite my efforts at trying to update my changes I just fell further & further behind until I finally didn't even know where my inventory book was anymore.  So much for my logical theory!!  For full timers this isn't as great a problem because they live with their stuff each & every day but for we Snow Birds it's kinda difficult with that long 5 & 6 month dry stretch in between travels.  Just when I'm getting my head wrapped around to knowing where things are while traveling it's time to head home in the spring again.  Six months later when it's time to hit the road once more I'm lucky if I can remember where I've even left the Motorhome!!   And, one last thought about storage.  That first year with the motorhome we jammed anything & everything into the rig's bins we could think of.  And why did we do that?  Because the space was there & we felt we had to fill it with something.  I am still mentally inclined that way & have to keep telling myself, "no, you do not have to fill that space!!"   This past year heading south we probably had a good 25% of our storage space empty with nearly the same percentage numbers coming back.   We're getting better:)) 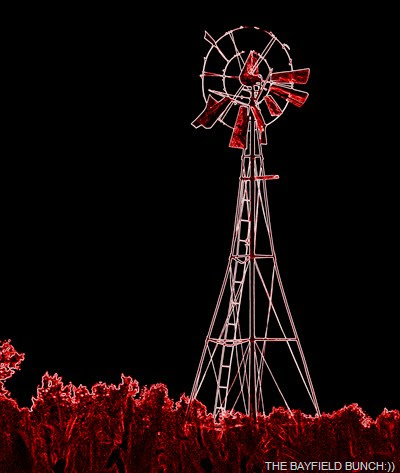 GROANER’S CORNER:(( A DEA officer stopped at a ranch in Texas and talked with the old rancher. "I need to inspect your ranch for illegally grown drugs."
"Okay, but don't go in that field over there."
The DEA officer verbally exploded saying, "Mister, I have the authority of the Federal Government with me!" Reaching into his pocket, he removed his badge and proudly displayed it to the rancher.
"See this badge? This badge means I am allowed to go wherever I wish, on any land! No questions asked or answers given. Have I made myself clear? Do you understand?"
The rancher nodded politely. "I'm sorry," and with that he went about his chores.
A short time later, the old rancher heard loud screams. He looked up and saw the DEA officer running for his life with the rancher's big Santa Gertrudis bull in hot pursuit. The bull was gaining ground on the officer with every step and it seemed just a matter of a few more steps before the officer would be gored.
The rancher threw down his tools, ran to the fence and yelled at the top of his lungs: "Your badge! Show him your BADGE!!"