A RESTLESS CASE OF ‘ANTS IN MY PANTS’ & MR. BLABBERFINGERS STRIKES AGAIN 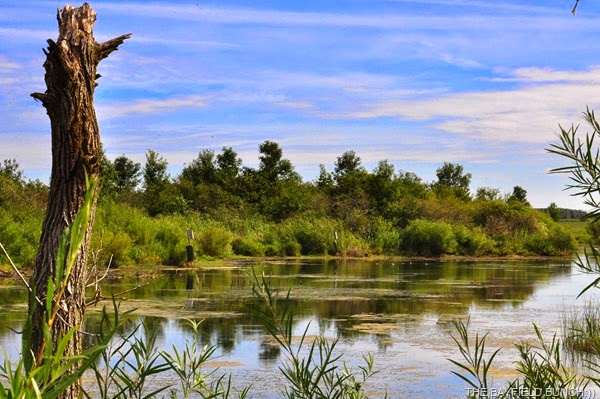 PHEEBS & I TROMPED AROUND IN THE HULLETT MARSH THIS MORNING
I sure seem to have quite a restless case of 'ants in my pants' lately.  I just can't seem to sit long enough to stay home this past week or two.   Kelly's been helping out at Deer Park Lodge this past while & this morning she headed on over there about 9:30.  With no ongoing projects around the house it didn't interest me to just sit around doing nothing.  Ho-hum, Pheebs & I were off again.  We didn't go to far this time because our cooler weather has lessened the flying bug menace so that meant we could head on over to the swampy Hullett Marsh & do some hiking instead of just driving.  And that's what we did.  Hullett Marsh is only about a 20-25 minute drive north-east of our place.  Canada Geese, Ducks, Killdeer & Great Blue Herons were about the only things moving.  Pheebs managed to muddy herself up pretty good & I somehow managed to keep my feet dry.  Of course we took the long way back home & I stretched that drive out to over an hour. 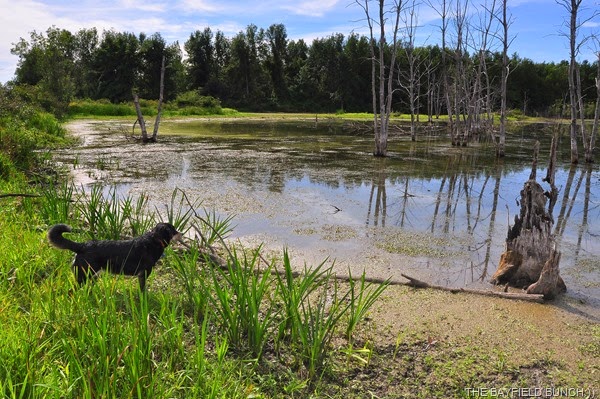 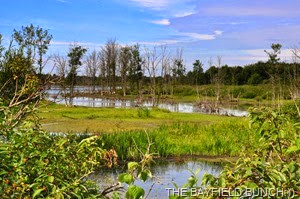 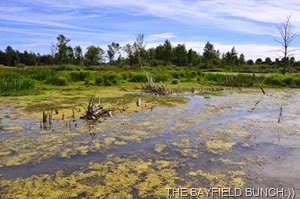 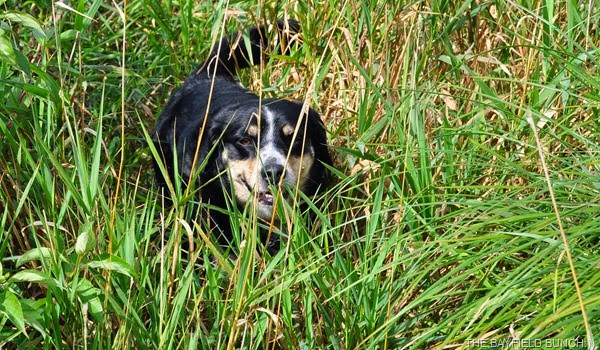 WE SURE GOT OURSELVES INTO SOME MIGHTY LONG GRASS THIS MORNING
I have a fair bit of outside work to do before we leave in less than 4 weeks but just couldn't quite summon up enough motivation or enthusiasm this afternoon to get at it.  Convinced myself there is lots of time yet.  It is sometimes too easy for me to convince myself of things.  Oh well, I'll git er done when I needs to git er done.

AND THERE’S ANOTHER SECTION OF WIND TURBINE GOING BY
Here’s an updated version of something I wrote a few years back called ‘Quirks & Foibles.’ And we all do have our little quirks and foibles now don’t we. Here are a few of mine.  Don't like using a metal spoon to stir my coffee because of the clanking sound the spoon makes. I prefer stirring my coffee with a plastic spoon. - No matter what, I never do the sleeve buttons up on a long sleeve shirt. Can't stand that tight feeling around my wrists & the same goes for the top button on a shirt.  It is extremely rare for me to answer a ringing telephone or for that matter pick up a telephone and call somebody.  We have a Samsung cell phone which Kelly makes me carry sometimes.  We’ve had it over a year & I’ve never used it once.  Not likely I will ever get into any of that tweeting or texting stuff either.  I never tell a joke but have forwarded countless thousands of them over the years on the computer to my jokes gang a few years back.  And of course I do have my Groaners Corner.  And you all already know what I think about hot weather & humidity.  Spending hours upon hours keeping a vehicle all spotlessly shiny and sparkly doesn't interest me much anymore.  Nor does swimming.  I have carried a notebook and pen with me every day for the past 30 years. Why would I need all this smart phone stuff anyway.  Whenever I go somewhere I make it a point to arrive early and never late.  I will take the extra time and drive the extra miles just to avoid the traffic chaos of a large city.  Rare for me to wear shorts and I never wear sandals.  Can't watch any movies or television with animals because inevitably the animals end up getting hurt or mistreated somehow & it doesn’t matter if the animal is not really being hurt…..I can’t watch it!!  I avoid groups or crowds of people because I feel very uncomfortable in those situations.   I do not play cards or table games.  BBQing, cooking, politics and sports hold zero interest for me as do computer games, chat rooms & social media sites.  I gave up being a TV junkie many years ago.  Never met a donut I didn't like.  I will whack a fly with a fly swatter but if I see a fly struggling in a glass of water I will carefully fish it out & set it free.  Can’t say I’d do the same for a Mosquito.  I stack dirty dishes neatly beside the sink & never leave them in the sink.  If I'm out for a walk or a hike & see  people approaching I will disappear off the trail until they have passed rather than stopping to chat.  I much prefer to do things & go places on my own rather than with a group of people.  I wear T-shirts in cold weather to keep me warm & not in hot weather to keep me cool.  I do not believe in being intentionally rude to anyone.  I am not a perfectionist therefore I avoid doing things that have to be done perfectly.  I have a reasonably good knack for being able to see both sides of an argument so it's not hard for me to apologize from either side of the table when I'm wrong.  I obviously would not make a good politician.  When I back up I generally flip on my signal light in the direction I intend to back.  I never ever swat at a bee & I never talk about religion.  I wear hats to keep the sun out my eyes & not to look cool.  I have zero tolerance for loud & obnoxious people under the influence of alcohol.  I always wear a button up shirt as opposed to T-shirts or pull-overs & I never wear sweaters any more.  A cold glass of Skim milk is my favorite drink of all time & I don't like any kind of fish unless it has a thick crispy batter on it.  And I do not like any kind of seafood whatsoever.  No hot spices for this guy either.  Once a book worm years ago it is now difficult for me to read anything printed on paper unless the the letters are about 2 feet tall.  I always put my pants on before my shirt.  Although I hung out in bars & hotels for years I never did like the taste of beer or any of the wines & hard stuff.  I always make my bed in Congress but never in Bayfield.  What’s up with that??  And it is the bottoms of my Carrot muffins I eat first & not the top.  Yes I’ve smoked & inhaled Marijuana but it just never caught on with me.  If I don’t have a time frame or destination I sometimes intentionally try to get myself lost on our many country road drives.  I like the feeling of getting myself un-lost.  My favorite pop/soda is Root Beer & I might drink one a year.  Any kind of a salad is not my favorite thing.  I don’t like hunting & I don’t like fishing.  Intentionally killing anything other than Mosquitoes just doesn’t work for me.  I hate confrontations of any kind & have to avoid them at all costs because I have a very short fuse for that sort of thing.  My least favorite color is white & I have no idea whatsoever what my favorite color is.  Music has given me more pleasure over the years than any other thing I can think of.  I eat about 3 peanut butter & honey sandwiches every single day & consume several gallons of Cranberry/Raspberry juice every week…………Well there ya have it & yes I know I have written far more than what you really wanted to read.   It was a slow day here & like I have said many times before, they don’t call me ‘Mr. Blabberfingers’ for nothing……………………..:)) 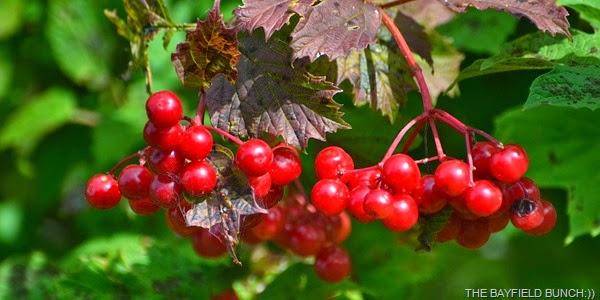 GROANER'S CORNER:((   A psychologist is selling a video that teaches you how to test your dog's IQ. Here's how it works:  When you spend $39.95 to see this video, it proves your dog is smarter than you.
Posted by Al Bossence at 8/29/2014