A SHOUT BOX GUEST ASKS, WHY AM I MESSING WITH SOMETHING THAT WORKS WELL 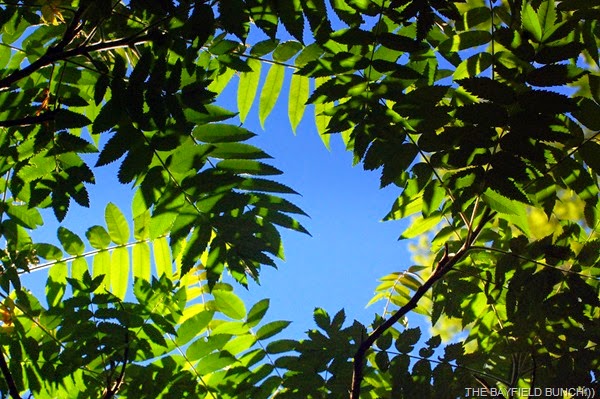 Luckily I checked the weather map before going to bed Monday night.  I could see a storm front over Michigan headed our way & it looked like it was going to roll into our neighborhood earlier than expected.  Slipped outside in my jams & rolled up the Jeep windows, closed the Motorhome door plus 2 shed doors.  Quick look around to make sure we hadn't left anything out & that was it.  Thunder, lightning & rain woke all 3 of us up about 4:30 in the morning.  Not having to lay awake wondering if I had left anything open outside I was able to grab another hours sleep. 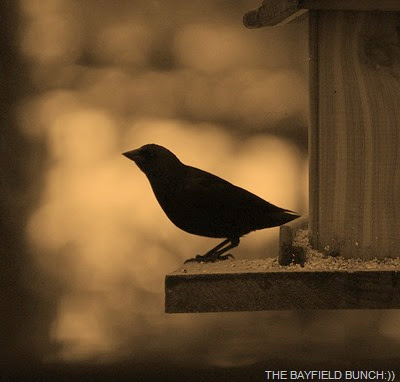 Humidity was heavy again this morning so we cut our walk short.  Mosquitoes drove us right back out of the Pine forest anyway.  Knew I only had until about 9 a.m. to get anything done outside I was going to do so I spent some time on one end of the weed whacker.  With this hot damp greenhouse weather of late weeds have been springing from the ground all over the place.  There are many nice things about living in a pine forest but one down side in this hotter weather is that we do not always get the cooling breezes coming in off the lake.  The breeze is out there but it just does not penetrate the forest leaving us with still air & mosquitoes. 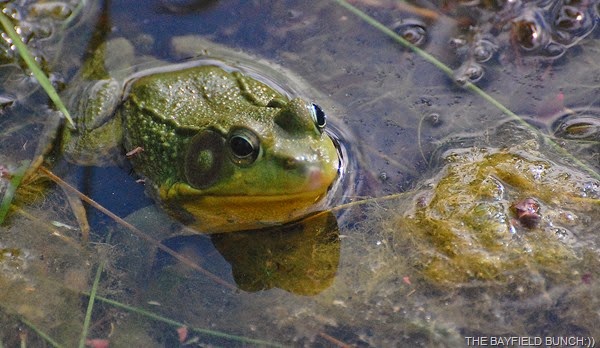 A few comments of late in our Shout Box about my Archive Memories idea.   One comment asks why would I do that?  Well I guess my answer is 'why wouldn't I do that.  Thought I had explained my reasons a few days ago for including an Archive Memories segment in some of my posts.  Besides the fact many new readers have come aboard these last bunch of years many things I have written over the years are just as fresh today as they were years ago.  I am not using my entire daily blog to tell an old story, I am rather using an occasional old story to add variety to my usual blog.   Any by the way I am not re-posting old posts I am only occasionally using excerpts from previous posts. It is always a challenge for any daily Blogger to come up with new ideas everyday & I struggle not to get myself caught up in the daily blow by blow repetitions.  I try to intersperse that with a creative writing style.  Old stories, new stories, some humor, some sadness, occasionally some anger, lots of thoughts & ideas about things.  Sometimes it's my head writing & sometimes it is my heart.  Sometimes I accidentally, unintentionally, or semi-accitentionlly  step on people's nerve ends & sometimes I can hear people laughing at my Groaner's Corner.  I try hard to keep my blog varied & interesting.  I know some will say, 'well if you don't have anything interesting to write about then why sit down & write about it.  I understand that thought & answer it by saying, I enjoy the challenge of trying to come up with ways of making the uninteresting…..interesting.  It's the way a creative mind works.  It has to be challenged, it has to be creative. 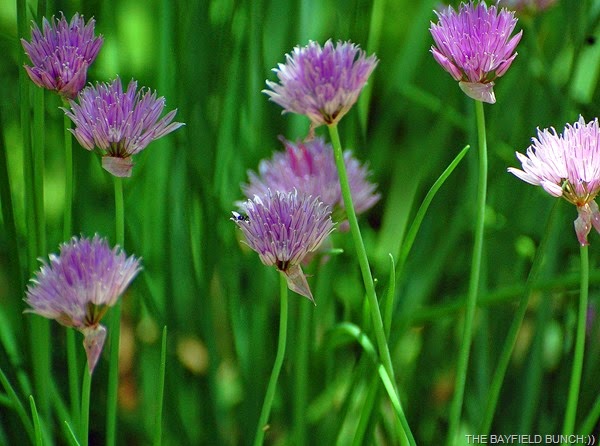 That creativity manifests itself in my photography each day as well.  Again, another great challenge coming up with photos I feel would be of interest & enjoyment to readers.  I often use my photos to tell a story as well so the writing & photos are often connected.  The majority of my photos are daily but there are times at the end of the day when I just come up short.  On these days I like to use file photos.  Is a photo taken in 2009 any less of a photo than a paragraph or story written in 2008, 2010 or whenever.  I think not.

I have said many, many, times before how much I enjoy writing & photography & through the wonderments of computers, the digital era & a blogging platform what a great opportunity for a creative inverted personality like mine to express itself.  Writing & photography ( & travel) are an enjoyment for me now at this later stage of life when enjoyment does not always seem to come as easily or frequently as it once did.  I think that has to do with losing interest in things that were once thought of as interesting.  I also know it to be a normal progression of aging.  And we do not all age at the same rate by the way.  But getting back to the comments in the Shout Box.  Are these a concerned & well meaning reader or two or as commenter Bev suggests, something to do with jealousy.  Perhaps yet another case of 'sour grapes.'  Whatever it is I will continue to write my blogs the way I enjoy writing them.  And by the way Archive Memories will continue, but not on a daily basis.  Hadn’t planned one for tonight but in lieu of the recent comments here is one entitled ‘Ode To My Coffee Cup’ written back in 2008.  Remember, you do not have to read this…….now how easy is that eh:)) 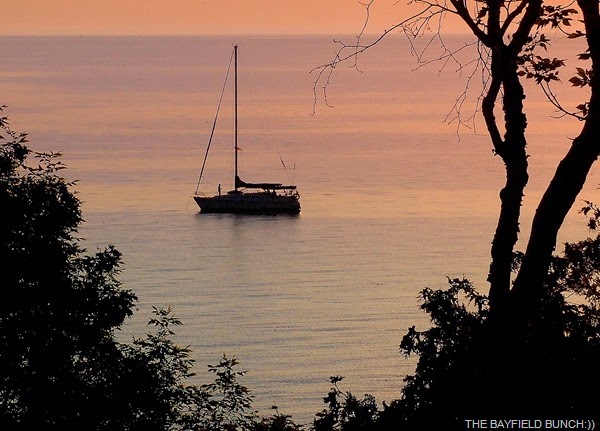 ARCHIVE MEMORIES::  It happened so quickly, & my old friend was gone in the twinkling of an eye. In a hurry with coffee in hand I headed out the back door to-day to see what the doggy guys were barking at. Not wanting to put my coffee cup in harm's way I reached out to set him on the deck railing whilst I headed down the steps to do battle with what was probably a chipmunk making faces at little Cora. It was the "crash" behind me & the tell tale sounds of breaking pottery that reached my ears before my brain did. I knew instantly, my favorite coffee cup had just bit the dust. No point in even looking back as I continued out into the back yard to have words with the furry cast of noisy characters. It was good I had something to focus on for a few minutes before returning to....pick up the pieces:(( 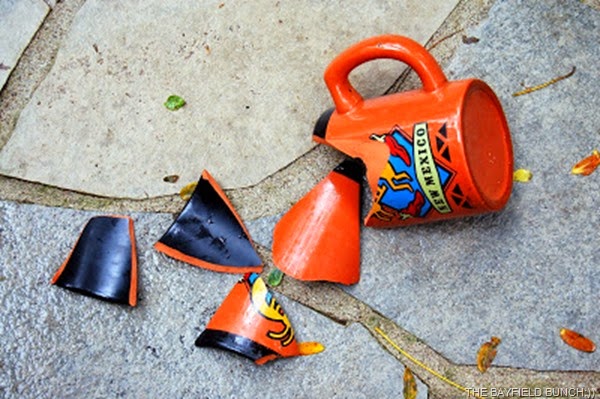 My old friend & I first met in the Apache Canyon Trading Post near New Mexico’s Carlsbad Caverns back on December 22, 2006. The Bayfield Bunch had stopped in to have a look around after exploring the Caverns earlier in the day. I'm not much for hanging around in gift shops too long so after a quick amble through the place I was headed back for the door when I spotted him sitting quietly with a bunch of his brightly painted pottery friends on a shelf by the window. He had a tanned adobe look with colorful markings & a name that read, New Mexico. And I liked his black glazed interior. A handsome devil indeed. I knew right away we were made for each other as I gently lifted him up off the shelf & headed for the counter. 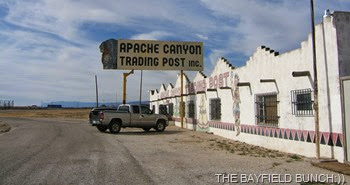 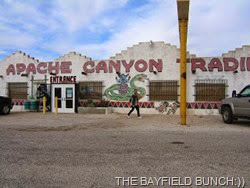 It was the beginning of a friendship that would last nearly 2 years with many memorable moments spent to-gether relaxing hand in hand. Sometimes beside me as we enjoyed many desert campfires, sometimes riding for endless miles up on the dash of the Motorhome scouting the way ahead. There were times he helped me outside in my various projects around home, & other times rode with me to work. Occasionally he went missing for a day or two until I was able to locate him again sitting on a stump in the garden or a rock out in the yard someplace, just where I had carelessly left him. But most often as not, he was right here on my desk beside the computer as I plunked away at my keyboard churning out yet another blog post at the end of many a day.  I am going to miss my old traveling buddy. I am going to miss him a lot:((((( 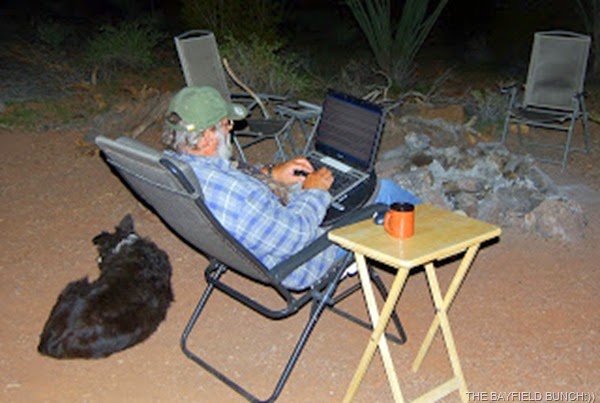 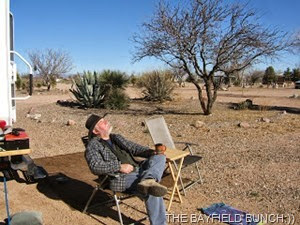 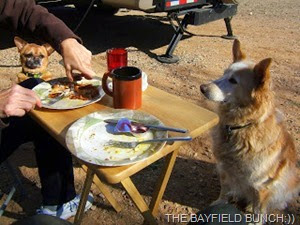 JUST A FEW PICS OF ME RELAXING WITH MY OLD PALS INCLUDING MY COFFEE CUP…THEY ARE ALL GONE NOW…PANCHO VILLA STATE PARK COLUMBUS NEW MEXICO
GROANER'S CORNER:((  Paul was not the brightest guy around. Every day, when he walked home from work, he would get stopped by three nasty men and they would beat him up and steal his money.  Finally, Paul decided that it would serve his best interest to walk a different route, but also take some self-defense classes so this wouldn't happen again. He joined a karate class and soon was doing very well with it.   One day, on the way home from work, Paul confidently decided to take his old route home and, sure enough, there they were. He walked up to them and the battle ensued.   The next afternoon, Paul went to his karate class with a black eye, a broken nose and a busted lip. His instructor was shocked and asked for an explanation.   "Well," explained Paul, "I took my old way home last night so I could beat up those guys who used to steal my money."   His instructor said, "What happened?"   Paul replied, "They jumped me before I could get my shoes and socks off!"