PHEEBS CHASES NOT ONE, NOT TWO, BUT THREE DEER THIS MORNING……AND ALL AT ONCE 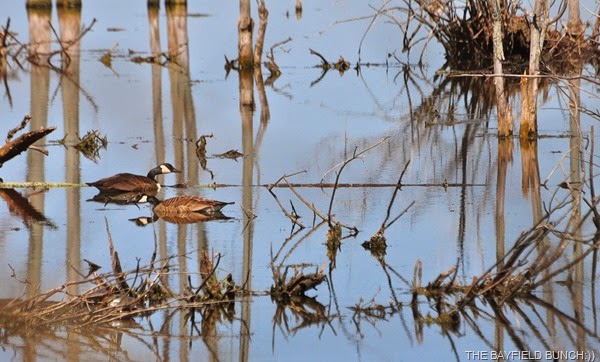 Seems Sunday mornings are becoming Jeep mornings as Pheebs & I again loaded ourselves up & headed out into the countryside about 9:20.  It was just the most bestest weather with a light warm breeze under sunny skies.  Kind of had that extra special magical feel to it as I parked the Jeep at one of a dozen or so parking areas in the HULLET MARSH.  The Marsh is only about a 20 minute drive northeast of our house……with a Tim Hortons in between. 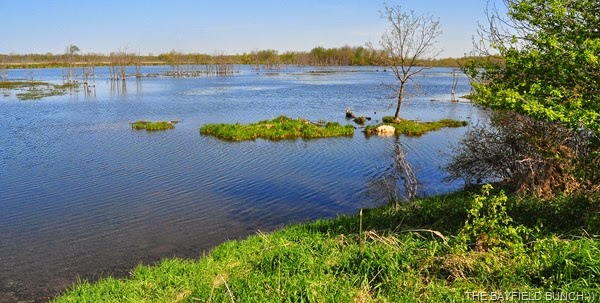 IF I WAS A KAYAK A-QUACK THIS IS WHERE i WOULD BE SPENDING MY TIME…WHO KNOWS, ONE OF THESE DAYS I MIGHT JUST TAKE THE PLUNGE:)) 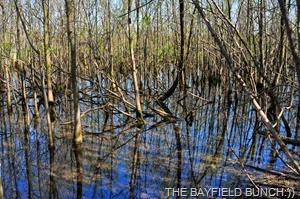 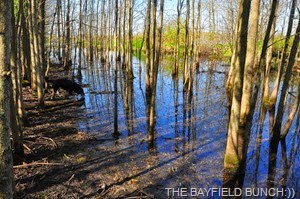 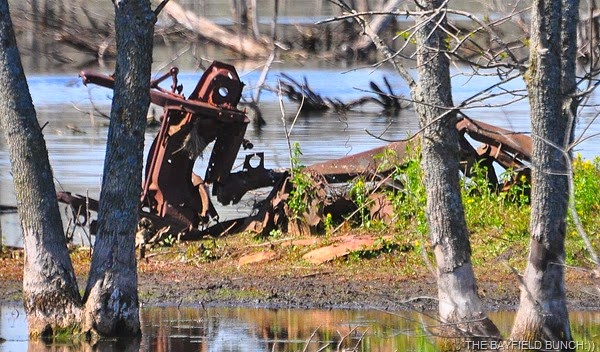 I WAS LUCKY ENOUGH GRAB A SHOT OF THE OLD SWAMP OGRE SEEN HERE ON HIS KNEES KNEELING FORWARD LIFTING SOMETHING…PHEEBS & I HAD TO BE VERY QUIET AS LEGEND HAS IT THE OGRE HAS BEEN KNOWN TO CATCH ADVENTUROUS BOYS & THEIR DOGS & DRAG THEM INTO THE BOWELS OF THE SWAMP :((

Owned by Ducks Unlimited the Marsh has 5,420 acres of forested wetlands with large open water ponds, grass lands & swamp areas.  This is home for many species of birds & mammals.  I have found it is very rare to meet another human being while hiking here & that is one of the big attractions for me about the Hullett Marsh.  Been hiking the Marsh since back in the early to mid 80's. Pheebs loves all the exploring & even got to chase 3 deer this morning which came bounding across the trail in front of us.  She raced after them as fast as she could go but the Deer just skipped & bounced away into the swampy forest.  No matter, Pheebs let out a great big bark at them anyway.  For a dog that rarely barks it's always something to hear her let out that one big loud chase bark. 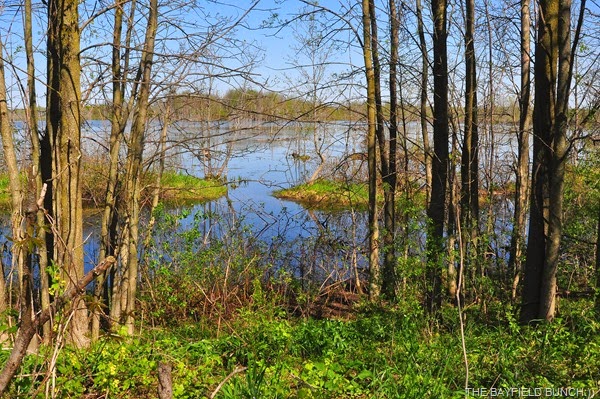 THERE ARE MILES UPON MILES OF GREAT HIKING TRAILS IN HERE 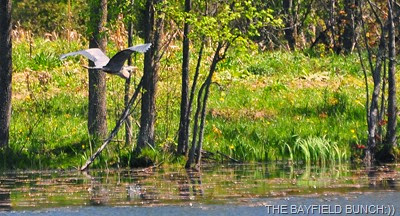 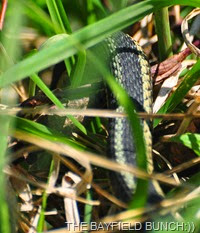 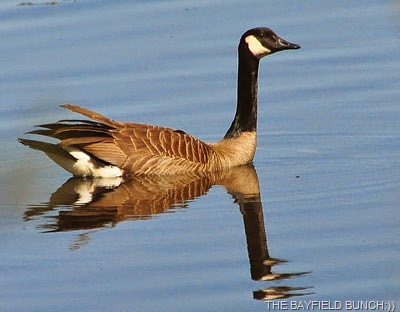 I wrote a post a few years back with some of my own personal camera tips & the photos below are a reminder of something I remember saying at that time.  Part of it had to do with cameras being in a camera bag while out walking.  I’m not a big camera bag guy.  Yes I have one but it & it’s contents stay in the Jeep.  I never carry a camera in a camera bag.  Never.  Before climbing in the Jeep on any one of our country drives I turn my cameras on & auto pre-focus them.  The cameras stay ‘on’ until I am home again.  Both cameras ride either on my lap, the dash, or beside me where the coffee cup holders are.  When walking or hiking I carry 2 DSLR’s & they are locked & loaded as a military person might say.  If a Heron lifts off a pond, a flight of Geese come in low over the trees, or as in the case of the photos below Deer pop out onto the trail ahead all I have to do is a quick draw McGraw & start firing.  No having to dig into a camera bag for a camera & appropriate lens, no having to turn the camera on, no lens caps to remove & no having to wait for the auto-focus to hone in on the subject which by now is probably far out of sight & off into the next County. 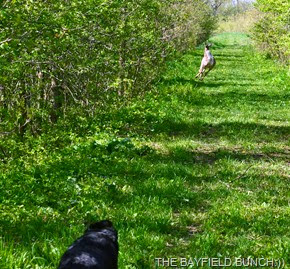 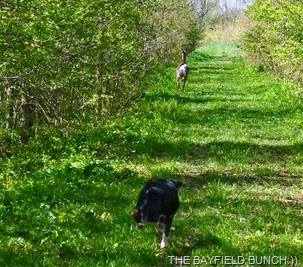 PHEEBS SPOTS THE FIRST DEAR & THE CHASE IS ON 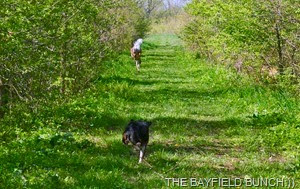 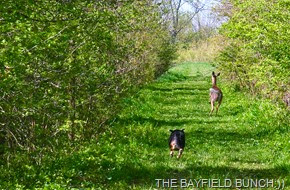 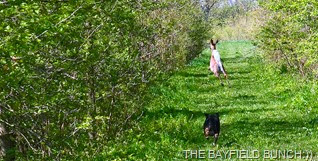 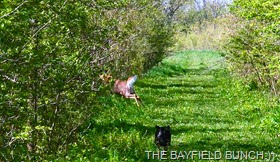 LAST 3 PHOTOS ARE OF THE 3RD DEER AS PHEEBS CLOSES THE GAP BEFORE THAT LAST DEER BOUNDS INTO THE FOREST
We spent about an hour walking, poking around, taking photos & just trying to keep our feet dry.  Well I did but Pheebs managed to get her paws wet a few times.  Even got in up to her ankles once.  Most unusual for her.  Our little Cora never liked water but Max & Checkers sure did & especially Checkers who would plow right into any water she could find.  It just felt so great to be outside walking with Nature & hearing all the surrounding Spring bird songs in the air & on the water.  I can’t think of a better place to be on a quiet & peaceful Sunday morning.

THIS TURNED OUT TO BE AN ILL THOUGHT OUT LANDING AS PAPA GOOSE CRASHED INTO MAMA GOOSE…LOOK CLOSELY IN BOTTOM PHOTO FOR MAMA…BOY DID SHE EVER GIVE HIM A GOOD HONKING RIGHT AFTER THIS
I've written about the great diversity of the flora & fauna between Bayfield Ontario & Congress Arizona before & will say again it is the huge contrast between both areas we call home that is one of the biggest attractions for us.  From tropically green here in Bayfield during the summer months to the great coloring shades of the Sonoran Desert in the winter.  Keeps restless people like myself from getting bogged down in same old, same old.  We so much look forward to heading for the South-West in the Fall & so much look forward to heading back to our Bayfield area in the Spring.  Just love that complete & total change in landscape every year either coming or going.  It is always something we soooooo look forward to. 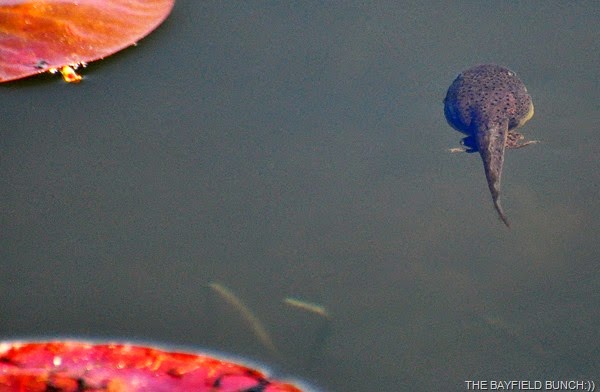 YIKES, DO WE HAVE SHARKS IN THESE CANADIAN WATERS 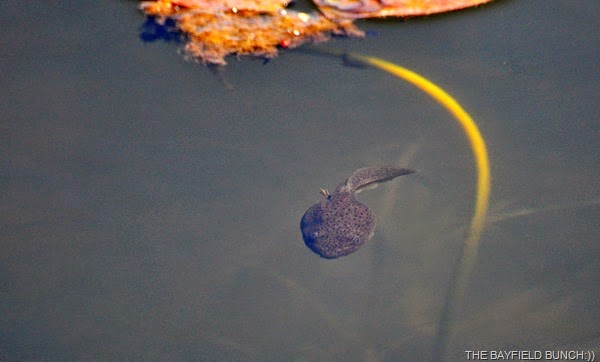 NOPE, JUST A BUNCH OF TEENY TINY TADPOLES ON THEIR WAY TO BECOMING GREAT BIG CROAKING FROGS
Pheebs & I were out for just over 3 hours soaking up the fresh country air.  A couple more stops & we were home again before 1 in the afternoon.  About a month ago I posted about a bunch of Wind Turbines going up south of Bayfield so figured I would take the bike for a run this afternoon to give it some exercise & have a look at how that Wind project was coming along.  Well I don't know what kind of turbine fertilizer those farmers down that way are spreading on their fields but there are big white Wind Turbines popping out of the ground all over the place.  I would say the number of turbines now has tripled if not quadrupled in numbers this past month.  Trucks, cranes, cable spools & digging machines all over the place.  Certainly is transforming the landscape.  And what a great afternoon for a Honda Shadow Aero 1100 bike ride it was too:)) 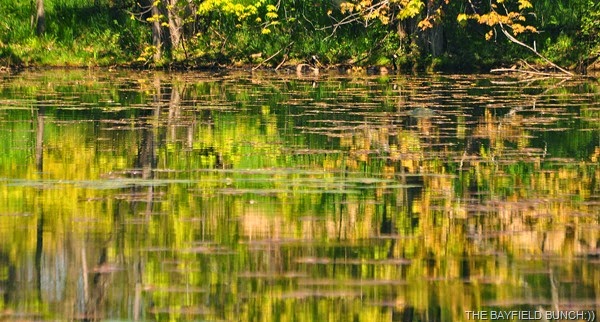 AN AUTUMN POND REFLECTION?  NOPE, JUST SOME OF OUR SPRING TIME COLORS
GROANER'S CORNER:((   A man walked into a bar and ordered a glass of white wine. He took a sip of the wine, then tossed the remainder the bartender's face.   Before the bartender could recover from the surprise, the man began weeping. "I'm really sorry. I keep doing that to bartenders. I can't tell you how embarrassing it is to have a compulsion like this."
Far from being angry, the bartender was sympathetic. Before long, he was suggesting that the man see a psychoanalyst about his problem.
"I happen to have the name of a psychoanalyst," the bartender said. "My brother and my wife have both been treated by him, and they say he's as good as they come." The man wrote down the name of the doctor, thanked the bartender, and left. The bartender smiled, knowing he'd done a good deed for a fellow human being.
Six months later, the man was back. "Did you do what I suggested?" the bartender asked, serving the glass of white wine.
"I certainly did," the man said. "I've been seeing the psychoanalyst twice a week." He took a sip of the wine. Then he threw the remainder into the bartender's face.
The flustered bartender wiped his face with a towel. "The doctor doesn't seem to be doing you any good," he spluttered.
"On the contrary," the man said," he's done me a world of good."
"But you just threw the wine in my face again!" the bartender exclaimed.
"Yes" the man said. "But it doesn't embarrass me anymore!"