PHEEBS & I HIT THE BACK ROADS FOR A RELAXING COUNTRY DRIVE:))

GOOSE-STEPPING IN THE COUNTRYSIDE THIS MORNING
A bone chilling cold wind will turn me around every time & that’s exactly what this morning’s Northern blast of frigid air did.  Ice Queens Kelly & Pheebs carried on around the whole trail while I wussed out & high tailed it for home.  None of that cold air for this guy if he can help it.  However, living in a Pine forest has it’s benefits though & one of those is the protection afforded against wind  by a number of trees.  If one can find a sunny spot that is.  My sunny spot this morning turned out to be my next clean-up project.

SOON THESE BROWN BARREN FARM FIELDS WILL BE GREENING UP WITH FARMERS CROPS
We have 2 sheds on our property & everything ends up inside them in the Fall before we head off for the South-West.  With sunshine directly on one of those sheds it was a good morning to get in there & begin a good clean-up.  Moved things outside so I could clean the floor for starters.  Absolutely amazing how much one gathers over the years.  A good percentage of it is junk of course & I don’t know where in my life I climbed aboard the junk highway but I did.  There is just no rhyme or reason for it but oh well, at least we have a place for our ‘STUFF’. 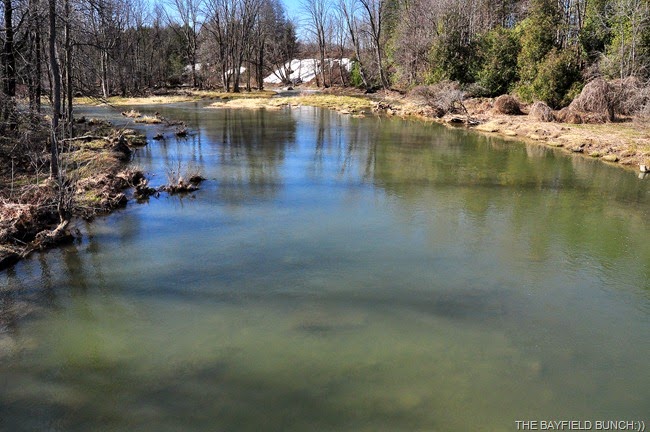 STILL A FEW PATCHES OF SNOW ON NORTH FACING HILLSIDES
It was probably around 9 when I figured it was about time Pheebs & I took a break from our Spring clean-up projects.  Time to switch gears, do something different, see a bit of the post-winter countryside.  Loaded up the little Rascal Pants, a couple cameras, myself, & Jeeped us on over to the little burg of Clinton Ontario.  Coffee & a muffin to go at Tim Hortons & we were once again out onto the back roads of Huron County.  How refreshing to see wide open spaces again.  Living in a Pine forest we have a tendency to feel boxed in by the trees a lot of the time.  No farmers on the land yet because the ground is still very soft from the huge snow load this past winter.  Standing water in many fields made for muddy bogs waiting to entrap any kind of farm machinery carelessly venturing forth. 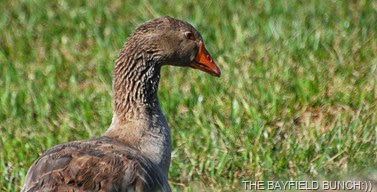 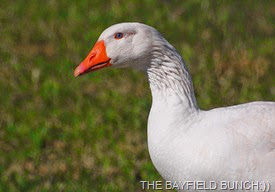 Slipped up & down a few of our old familiar roads just enjoying the warm sunshine beaming in Jeepers windows.  Pheebs was all happy to be out for a ride & bounced back & forth between the passenger seat & her soft cushy raised platform area in the back.  Despite traveling many miles on these gravel roads over the last number of years it still bothers me when I can’t remember where they go.  Everything is familiar of course but when I sometimes try to project an area map in my head which would take us to one of our favorite stopping places I just can’t seem to figure out how to get there.  Guess it’s part of the aging process but it’s a scary part of the aging process.  How soon the mind seems to forget things if they are not repeated over & over. 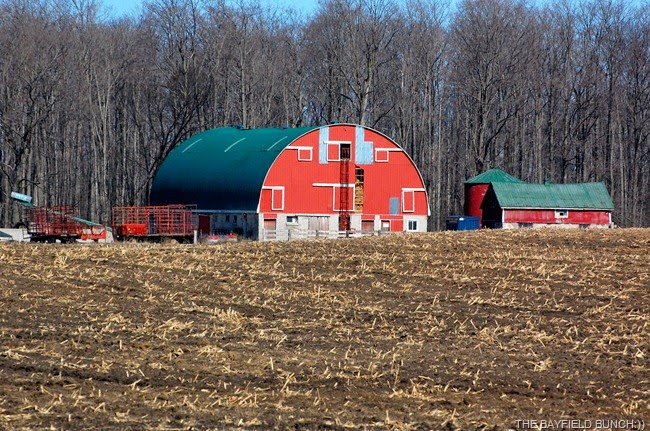 LAST YEAR’S CORN FIELD AWAITS THE FARMER’S PLOW
It wasn’t one of our usual 3 or 4 hour tours today & we were back home before 11.  Rains over the last couple of days had left Winnie in a bit of a mess with pine needles etc so I had to clean some glass all over again & do some wiping down.  Our frog pond was in warming full sun so started the annual clean-up there as well.  Lots to do but the cold air finally took it’s toll driving me inside to fall blissfully asleep in my recliner by early afternoon.  What a nice feeling that was.  I did briefly venture out a few more times managing to get the Jeep’s muddy tires cleaned up, some more pine needles raked, & lifted neighbor Monica’s suitcase into her car.  She’s going to be away for a month of which 11 days will be spent in Hawaii.  I will probably dig my motorcycle out of her garage Thursday. 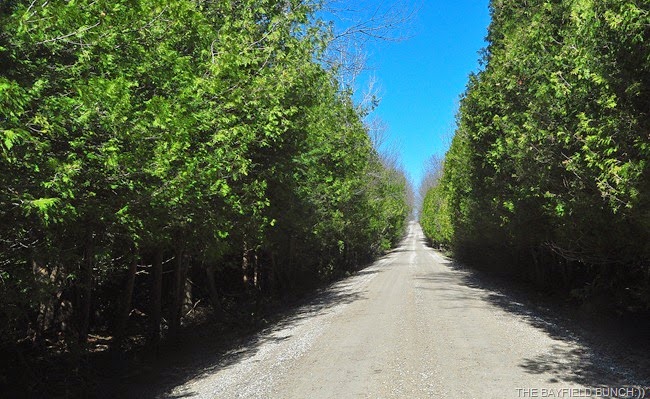 A CEDAR LINED COUNTRY ROAD THIS MORNING
Had a few people ask questions lately about towing our Jeep.  One in an email, one in our Shout Box & another fella in Durango Colorado a couple weeks ago when we stopped at a McDonalds.  Questions being, ‘what gear to leave the Jeep in while towing’.  First off our Jeep is a 6 speed manual transmission.  I may catch some flak for this but I don’t really think it matters what gear the transmission is left in because when the 4 wheel drive crankcase is pulled into it’s neutral position for towing it disengages the transmission anyway.  But out of habit I generally leave the transmission in third gear.  Been towing the Jeep back & forth to the South-West for 4 seasons now without any problems.

GROANER’S CORNER:((   You've all heard of the Air Force's ultra-high-security, super-secret base in Nevada, known simply as "Area 51?"  Well, late one afternoon, the Air Force folks out at Area 51 were very surprised to see a Cessna landing at their "secret" base. They immediately impounded the aircraft and hauled the pilot into an interrogation room. The pilot's story was that he took off from Las Vegas, got lost, and spotted the Base just as he was about to run out of fuel. The Air Force started a full FBI background check on the pilot and held him overnight during the investigation. By the next day, they were finally convinced that the pilot really was lost and wasn't a spy. They gassed up his airplane, gave him a terrifying "you-did-not-see-a-base" briefing, complete with threats of spending the rest of his life in prison, told him Las Vegas was that-a-way on such-and-such a heading, and sent him on his way. The next day, to the total disbelief of the Air Force, the same Cessna showed up again. Once again, the MP's surrounded the plane ... only this time there were two people in the plane. The same pilot jumped out and said, "Do anything you want to me, but my wife is in the plane & it is crucial to my immediate health that you to tell her where I was last night!!
Posted by Al Bossence at 4/23/2014