OH NO, WE HAD TO PUT THE PLASTIC HEAD CONE ON THE PHEEBS:(( 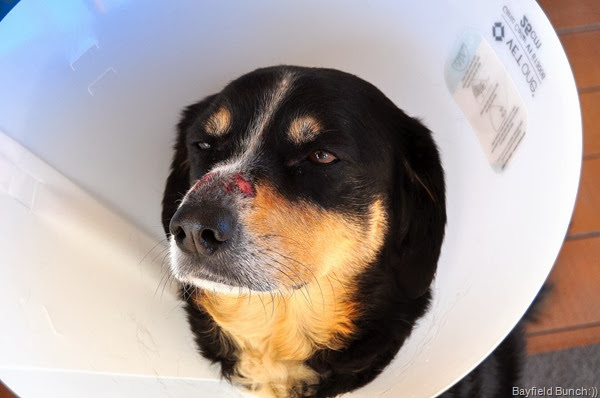 Plugged away at my Cactus beds on & off today.  Work for awhile, get all sweaty & tired & rest for a longer while.  Repeat when able.  Kelly headed into Wickenburg to pick up her blood test results from Tuesday.  Pheebs picked away at her nose scab in the night so we had no choice but to put the ‘dreaded’ plastic cone on her head this morning.  She is no doubt a bit depressed but is making the best of it…………. 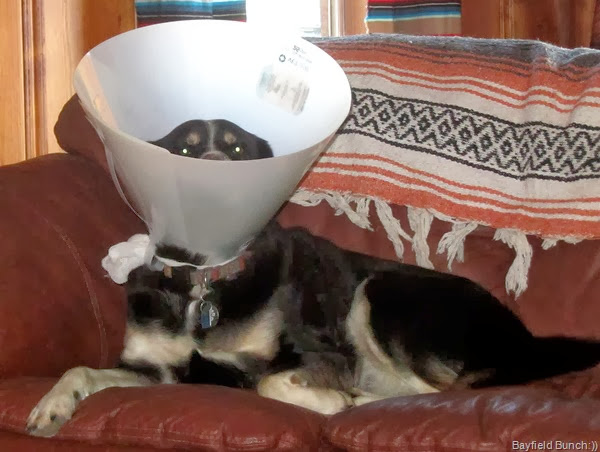 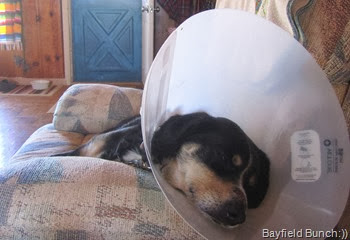 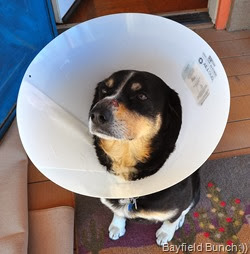 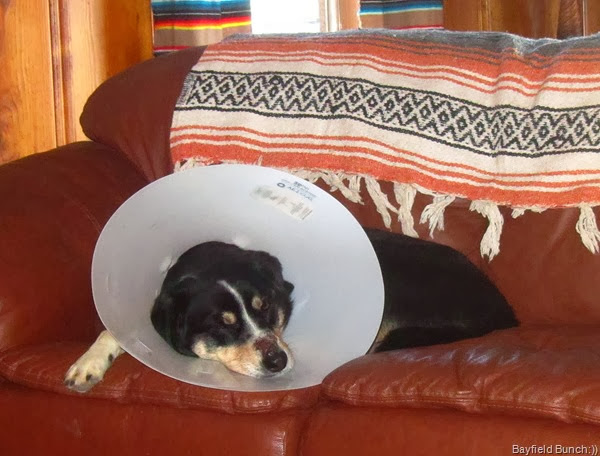 Made a concentrated effort to stay away from the Lemon Crisp cookie jar today & succeeded with much difficulty.  Brought back shaded memories of when I quit drinking & smoking many, many, years ago. 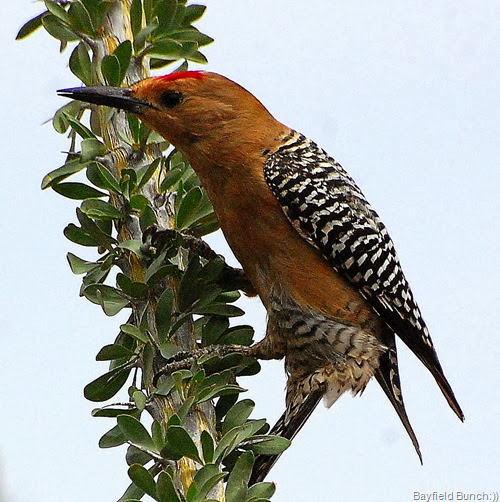 Some of you RV folks may already be aware of a new RV friendly website that has been in the making for awhile.  We first heard of it from Chris & Cherie at TECHNOMADIA a few weeks ago.   RVillage went public today but you might want to drop by Chris & Cherie’s site to read all about it first.  I did pull this short RVillage introductory info from their site though.  ‘The core idea of RVillage is to create a very simple (and free) tool for RVers to connect with each other – not just online, but right in the RV parks and places they are currently staying in.

When a user checks into a location in RVillage, they can discover the things that they have in common with other RVers right around them.

This sure beats leaving connections up to chance encounters while walking the cat, or the random stranger coming up asking “what type of engine is in that thing?” while you are busy dumping the tanks.

“With RVillage, an RV park full of strangers becomes a Village full of friends.” 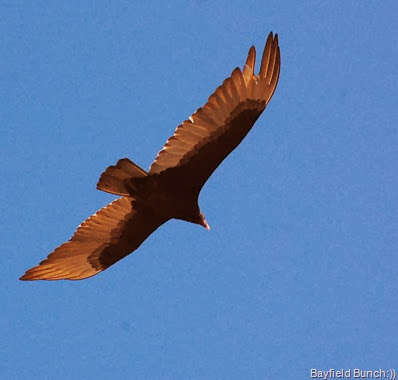 Kelly’s ‘Liver Enzyme’ test numbers although still high were once again down for the third consecutive month in a row.  Will be interesting to see if those numbers continue their downward trend once we have been back home in Bayfield Ontario for a month or two.

It was 2 years ago this morning we received a call from our Real Estate agent in Prescott saying the deal had gone through & we were now the new owners of an old somewhat dilapidated house on Ghost Town Road in Congress Arizona.  And just where exactly were we when that call came in??  PETER KNOWS:)) 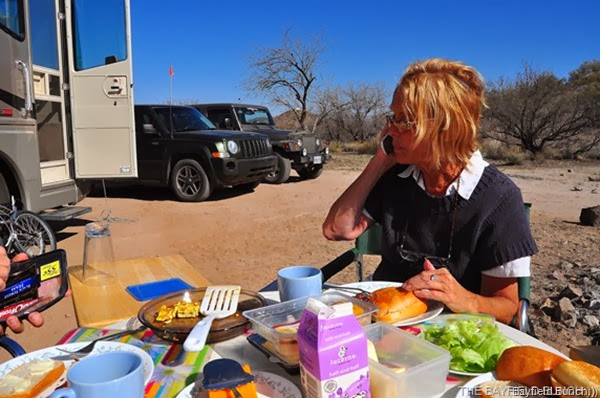 It was pretty touch & go 2 years ago at this time with our house deal.  We felt reasonably confident the deal was going to go through but neither one of us had the patience to wait for all that long drawn out paper work to be finalized.  We took a big chance on moving our rig from our boondocking spot in the desert south of Congress onto the property we were negotiating to buy.  We never told the Real Estate guy up in Prescott we did that.  Kelly managed to figure out the Realtor’s lock on the door & we were able to get into the house.  We never told the Realtor that either.  We were counting on him not to show up at the house again.  His office was an hours drive away in Prescott & we gambled on the assumption he didn’t want to & wouldn’t drive all the way down to little old Congress again.  With that assumption stuffed tightly in our pipes we went ahead & began fixing up the house.  The Realtor never did find out that we picked the lock, cleaned up & burnt a bunch of trash, planted some Cactus, began painting kitchen cabinets, moved some furniture in, got the water turned on & then hired a fellow from Wickenburg to stucco the entire house.   We did all that before the final papers were signed.  Definitely not a ‘by the books’ way to buy a house & then get into it ahead of time without the Realtor even knowing.  But it was our way of doing things in that particular situation & we knew our intentions were good.   We took a big chance & lucky for us it worked:))  But I almost blew the whole darn thing the day we moved our Damon Class A Motorhome onto the property!! 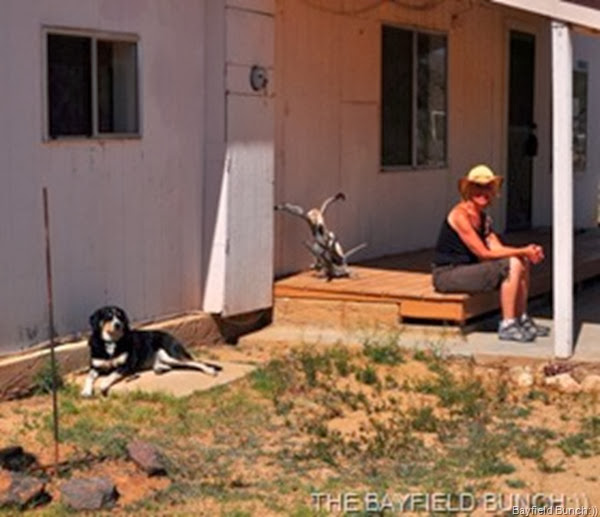 I was so focused on the house when I pulled into the driveway I failed to see the low hanging power line stretched across the driveway.  Without even knowing it I drove right into that power line & it rode right up on top of our front A/C unit & sat there.  Lucky for me that is exactly where I happened to stop & park the coach.  I was out looking at the house when Kelly drove in with the Jeep pointing to the top of the rig saying, “didn’t you see that”!!.  “See what”??  Oh Geeeeezzzzzzz:((

Going to meet up with a very well known full timing RV Blogger & her husband sometime in the next couple days.  Not the first time we’ve met this Gal but it will be the first time meeting her husband.  I consider her blog one of the absolute finest RVing blogs out here.  Bar none.  Always informative, always entertaining.  We saw them go by our house Tuesday afternoon & know they are boondocked just a short distance away.  Being fellow boondockers ourselves & knowing they had just rolled in from an extended stay in a busy RV Park we did not rush down to see them.  We knew they were needing their ‘quiet time’.   Besides we had been in email contact with them the past few weeks & had set up the 13th or 14th for a meet up time.  Stay tuned to see who these folks are…………………….:)) 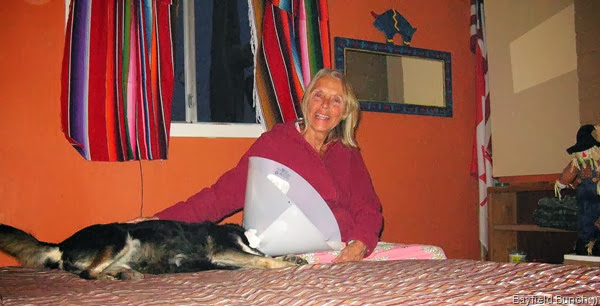 GROANER’S CORNER:(( Jorge Mario Bergoglio was not the Cardinals’ first choice to be the new pope, and to become Pope Francis. Their first choice was, interestingly, Cardinal Hans Grapje.
Grapje was raised in a Catholic school in The Hague and, as a young man, aspired to become a priest, but was drafted into the Army during WWII and spent two years co-piloting bombers until his aircraft was shot down in 1943 and he lost his left arm. Captain Grapje spent the rest of the war as a chaplain, giving spiritual aid to soldiers, both Allied and enemy.
After the war, he became a priest, serving as a missionary in Africa, piloting his own plane (in spite of his handicap) to villages across the continent. In 1997, Father Grapje was serving in Zimbabwe when an explosion in a silver mine caused a cave-in. Archbishop Grapje went down into the mine to administer last rights to those too severely injured to move. Another shaft collapsed, and he was buried for three days, suffering multiple injuries, including the loss of his right eye. The high silver content in the mine's air gave him purpura, a life-long condition characterized by purplish skin blotches.
Although Cardinal Grapje devoted his life to the service of God as a scholar, mentor, and holy man, church leaders felt that he should never ascend to the Papacy. They felt that the Church would never accept...
...a one-eyed, one-armed, flying purple Papal leader.

(If you don’t remember Sheb Wooleys PURPLE PEOPLE EATER song this joke ain’t a gonna make no darn sense to ya no how:))