KELLY IS GETTING TOGETHER A TRADER JOE’S SHOPPING LIST 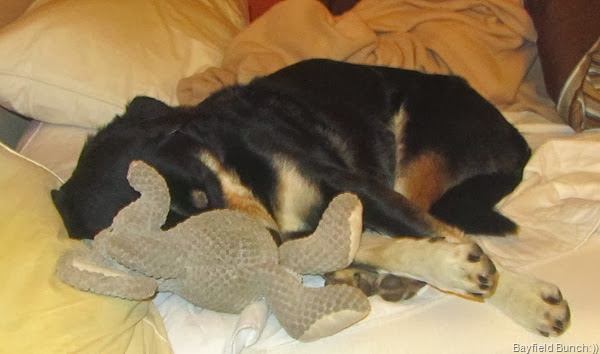 SOUND ASLEEP THIS MORNING WITH HER LITTLE PAL OLLIE THE OLIPHANT

Ahhhhhh, clear blue skies with a big bright Arizona sun this morning.  Just what the Doctor ordered.  Now if Arizona could just turn it’s heat up a tad to the point where I can begin complaining about how hot it is all will be well again. 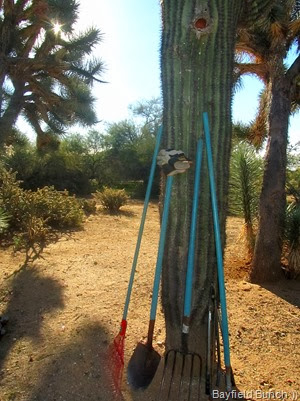 MY GARDEN TOOLS WERE PATIENTLY WAITING FOR ME THIS MORNING >>>

Contentedly resumed my clean-up project on the neighbor’s property.  Working in a nice quiet secluded area now with Joshua Trees, Agave’s, Saguaros, Ocotillos, Chain Fruit Cholla, Prickly Pear Cactus, Palo Verde, & Mesquite trees etc.  Raking out dead cactus & trimming back overgrown branches.  For me it’s a nice way to spend a few solitary hours & get myself a little exercise to boot.  Worked away till I wore myself out around 1:30.  Best part about wearing oneself out is flopping in a big old comfy recliner & kicking back for some R & R time.  I like that feeling. 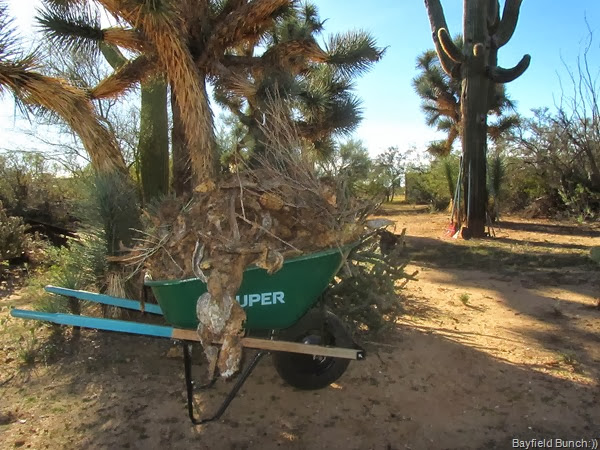 Something I forgot to mention about Prescott in Tuesday’s post.  Two big thumbs up for the 101.7 radio station.  What a pleasant surprise to come across a mature radio station in this day & age with easy listening music & no yammering announcers or teeth jarring hoaky commercials.  Thank you for adding to our pleasant day Prescott:)) 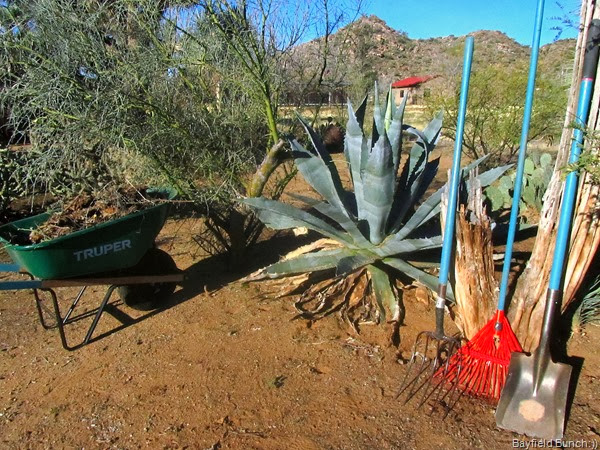 So glad we are not back in Bayfield digging our way out of yet another winter blizzard.  Imagine I will have myself a big Spring clean-up this year with tree limbs down etc.  An email from home said a falling Pine branch broke the globe on our light at the end of our driveway.  Fingers crossed that our water pipes will be alright with the intense cold this year. 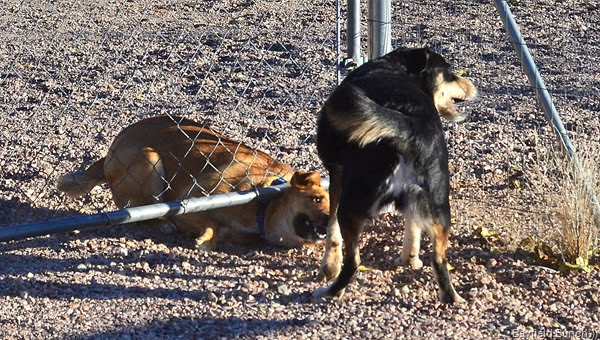 AW COME ON PHEEBS HOW’S ABOUT ANOTHER SMOOCH

Been nearly 2 years (March 2012) since we bought our Congress house so how do we feel about that decision at this point.  Two thumbs up with no regrets comes to mind & we especially enjoy it while we are here for the winter.  But it’s a long stretch from when we leave in early April until we return in late October.  And it is during this time we have a tendency to occasionally waiver & think to ourselves maybe we should sell it.  However, those wavering doubts are soon dispelled as soon as we pull into our Congress Arizona driveway here in the Fall.  We’re just so glad to have what we have & all our reasons for buying the house & property in the first place come rushing back ten fold. 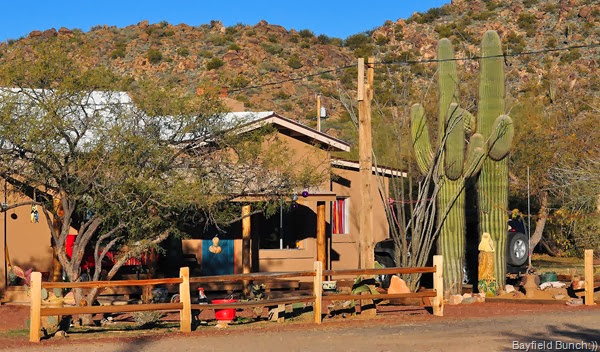 Congress is such a great central location & springboard for area travels to new & old places.  We could drive to Bisbee Arizona in a day or Borrego Springs California in half that time.  It’s a full day’s drive to Moab Utah & we could make it to the South rim of the Grand Canyon in about 4 hours.  About 3 & a half hours to Joshua Tree National Park.  A short 3 hours down to Darby Well in Ajo & about 3 hours over to the Sedona area.  Two hours can put us in the Kofa Mountains.  A day’s drive could easily land us in Silver City New Mexico & a good day’s drive from Congress could put us up into Cortez, Colorado.  Yep, I think we are in a pretty great area for future travels alright. 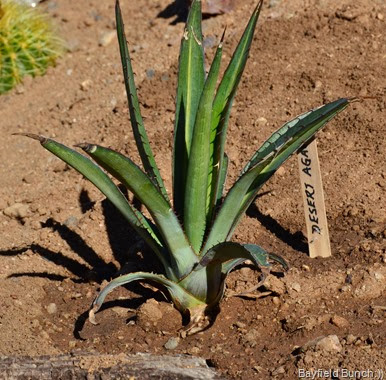 Kelly is putting a list together for the next time we go to Trader Joes.  Peanut Butter Pretzels were suggested & are high on that list for me.  Kelly’s got ‘Almonds’ wrote down after another suggestion.  Not being familiar with TJ’s I guess we’ll have to spend a bit more time having us a look around in there.  Do any of you TJ folks out there have any more suggestions for Kelly to add to her Trader Joe’s list…………….

It was mentioned in the Shout Box today that I have written some ‘bad blogs here’.  Well, let me be the first to say yes I have written some posts & said some things over the years that I would rather take back but I stop short of thinking of them as bad.  Opinionated for sure, a bit aggressive at times, maybe not well thought out at other times, occasionally accusatory, biased even, but downright bad……hmmmmm.  Here’s how the dictionary defines ‘bad’……of poor quality; inferior or defective.
substandard, second-rate, second-class, unsatisfactory, inadequate, unacceptable, not up to scratch, not up to par, deficient, imperfect, defective, faulty, shoddy, amateurish, careless, negligent, miserable, incompetent, inept, inexpert, ineffectual; awful, atrocious, appalling, execrable, deplorable, terrible, abysmal; crummy, rotten, godawful, pathetic, useless, woeful, bum, lousy………… I guess it’s all in what one considers ‘bad’. 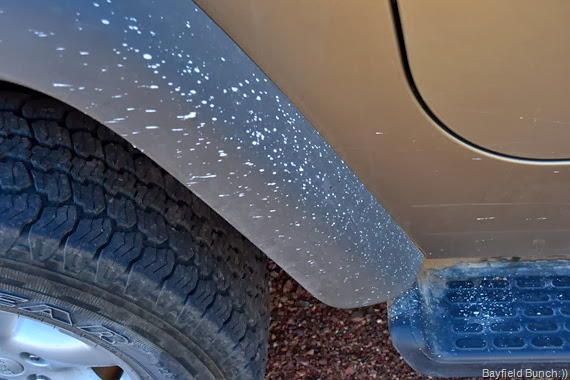 Liked the colorful photos TRAVELS WITH CC & DIXIE had in their recent post.  Especially the ones of the Dade Battlefield Historic State Park. It was the 34th annual Reenactment of the Seminole Indians vs. American soldiers battle of December 23, 1835, so called Florida-Indian wars.  A quote from their post says, “With the smoke in the woods, many of my photos look like paintings”. 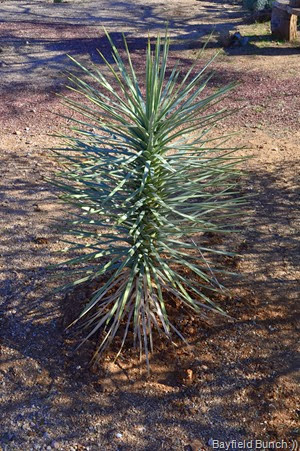 Boy are the birds ever mad at me.  Ran out of birdseed & the store where we get it is closed today.  We could have a full scale feathered revolution here at any minute.  Our back yard right now is full of angry looking winged warriors.  Could be tense over the next 24 hours…………………….. 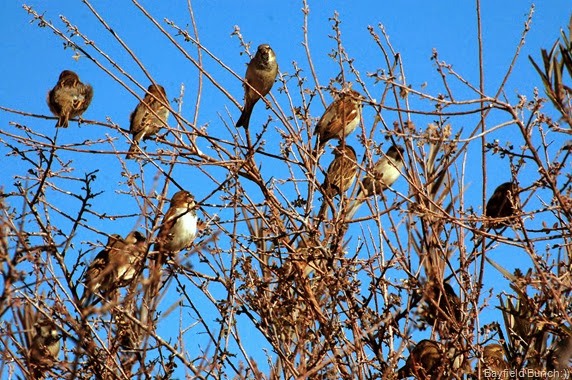 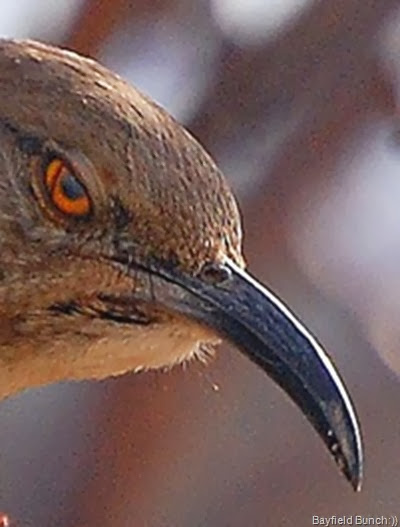 <<< YEP, THIS GUY IS REALLY TICKED OFF

GROANER’S CORNER:((  Did you know that marriage is a relationship in which one person is always right, and the other is a husband. And there's one good thing about snow, it makes your lawn look as nice as your neighbor's.