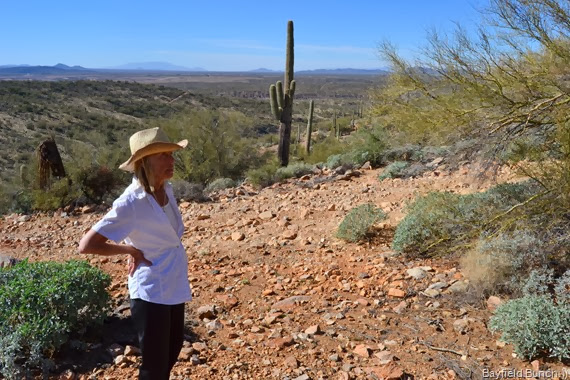 Wanting to change things up a bit from our usual morning walk we piled into the Jeep & headed off in search of some new horizons for a change.

Slipped on down south of North Ranch & bumped our way into the desert through a familiar fence.  This was the area we first came to in Congress back around the end of February 2012.  JANNA & MIKE back then had told us of a nice boondocking area & that is where we headed back to this morning.  KAREN & STEVE as well as RV SUE have boondocked here too.  This is the place where Pheebs made friends with all the cows & all those cow smooching photos were taken.  We waved at some cows & our two previous camping spots & headed further into the desert where we had not been before. 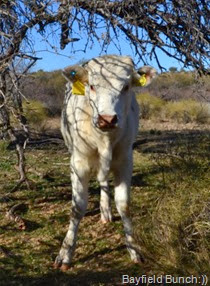 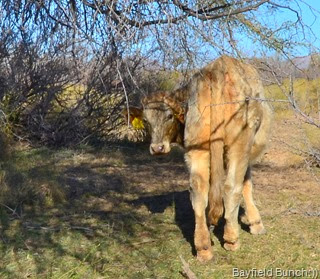 PHEEBS WAS CRYING TO GET OUT WHEN SHE SAW THESE COWS

We followed a rough & tumble road back to the Martinez wash, up over a ridge & onto a second plateau.  One spot we got out to double check the road/trail ahead. 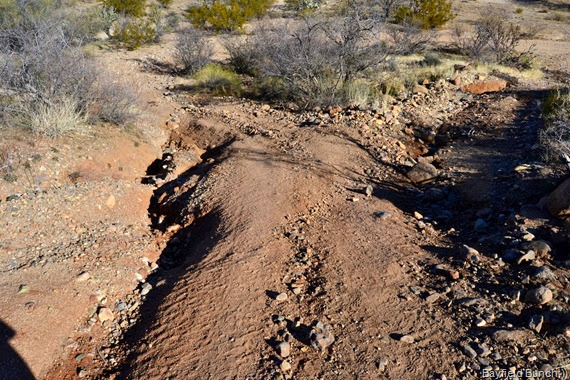 NO PROBLEM FOR JEEPERS

Coming down of the second plateau we entered a dry wash whereupon we turned south & drove a few miles along a sandy bottom.  This is where 4 wheel drive really comes in mighty handy.  The Jeep wallowed, yawed & slewed as each tire pulled it’s way through the gripping sand.  It’s important to keep the wheels moving.

WHEN IN SAND IT’S A GOOD IDEA TO KEEP MOVING

We had been told by an ATV’er a ways back we could reach Round Mountain by following this wash.  Well, we probably could have except we followed tire tracks in the sand to the right when we should have followed them to the left.  We knew we were on the wrong trail when we could see Round Mountain becoming further distant on our left side & then behind us.

THAT’S OUR DESTINATION ROUND MOUNTAIN ON THE HORIZON

We stayed on the trail we were on which eventually led us to a road which in turn led us back to #89 highway.  Figured we were half way to Wickenburg.  We could turn right & go home or we could turn left & head to McDonald’s for a coffee.  Easy decision & off we went to Wickenburg.  What a maniac speedway of traffic that highway 93 is.  Ridiculous!! 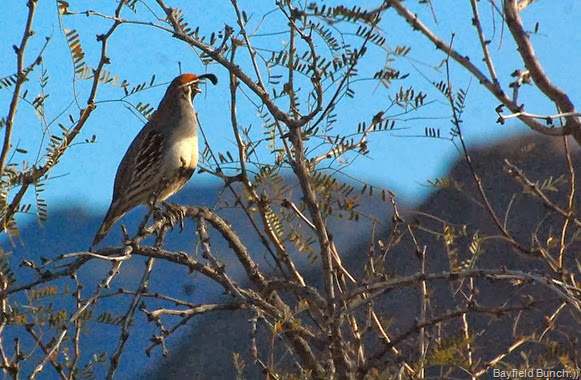 With coffees secure in their holders we backtracked up highway 93 through a couple round-a-bouts & found us the ‘Scenic Loop’ road.  We have traveled this road before but today we were looking for a way to reach Round Mountain which isn’t really a mountain but just a big pointy topped hill.  Of course if it was located out on the flat land Prairies I’m sure the folks living there would consider it a mountain.   We remembered Scenic Loop road as being washboardy from last time.  It hadn’t changed.  Found the small dirt road leading to Round Mountain & went part way up & stopped.  The road was deteriorating & the next section was narrow, steeper, & made up of a lot of sharp loose rocks.  The Jeep would have gone up there no problem but how much did we want to beat up our tires on those sharp rocks.  Decision was unanimous & we decided to park little Jeepers & grab ourselves some exercise by walking part way up.  Nice views. 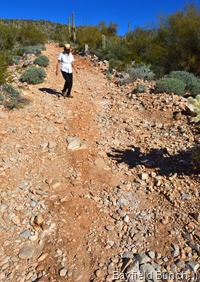 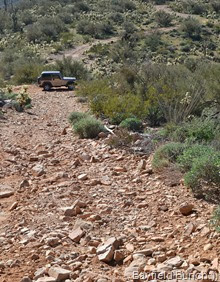 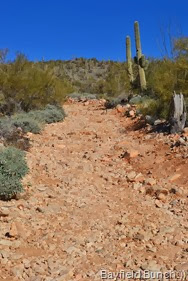 Spotted a couple red Polaris RZR’s coming down.  Those RZR’s are kinda somewhere between an ATV & a very small Jeep.  Driver & passenger sit side by side instead of one behind the other.  We see a lot of them around here & they are popular with folks.  Because of their 4 wheels instead of 3 they look a little more reassuringly stable than an ATV.  The folks stopped & chatted for a bit.  One couple from North Dakota & the other couple from just up the road at North Ranch. 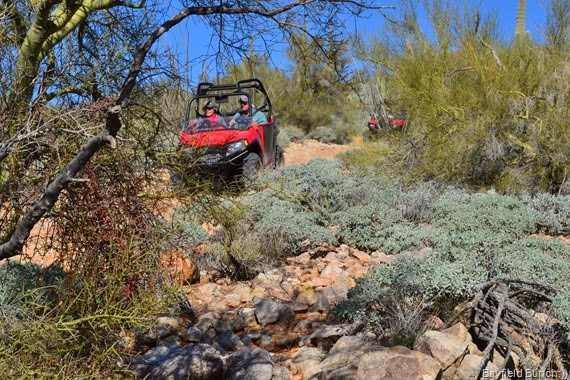 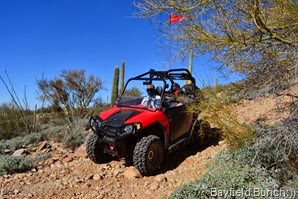 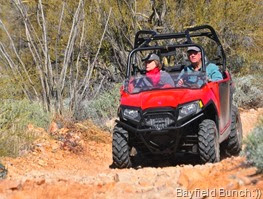 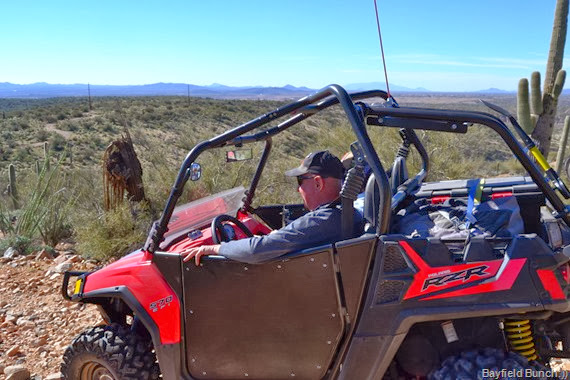 We had ourselves back in Congress before 1 & that was about it for the rest of our day as far as things to write about go. 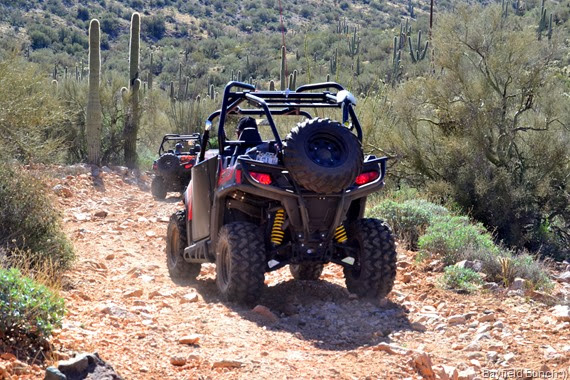 And we were saddened a few days ago when we heard that one of Pheebs little Pals on the block squeaked through a hole in a fence awhile back & disappeared.  Gizmo’s house was right on the edge of the desert & the neighborhood is frequented by Coyotes.  We hadn’t seen the Giz for a couple weeks & had wondered if something had happened……………I guess it did:(( 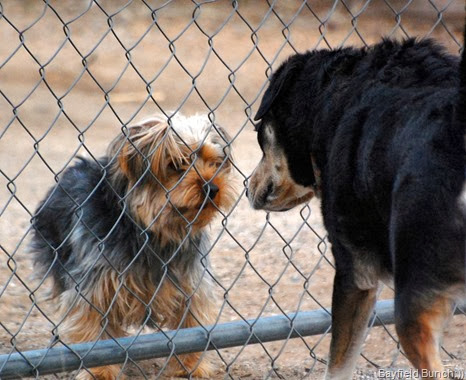 GROANER’S CORNER:((  Women have a Passion for Mathematics.  They divide their age in half double the price of their clothes & always add at least 5 years to the age of their Best Friend.