STORM CLOUDS OVERHEAD & I THINK I KNOW HOW THE HORSE DIED 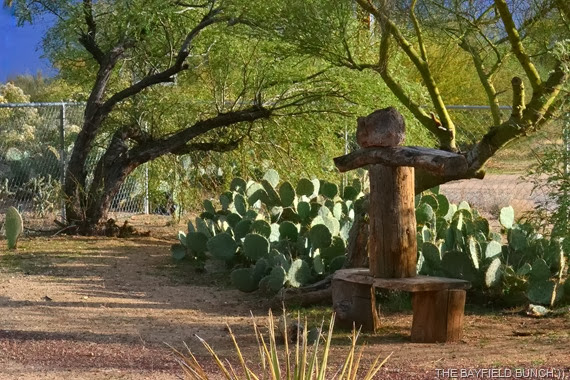 Checking our wind sock this morning we knew we had us some wind blowing.  Thermometer said 51F & with that wind we knew a colder day was fast upon us.  A few sunny periods helped a bit but were soon blocked by a thickening cloud cover.  That pretty much kept us inside for the rest of the day.  Like I have said many times before, neither one of us are cold weather enthusiasts.  Not hot weather enthusiasts either but somewhere between the two we are indeed enthusiasts of moderation. 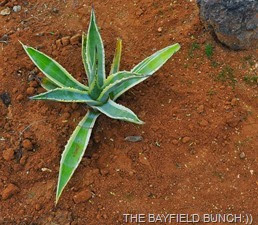 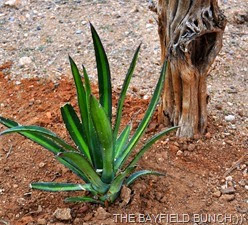 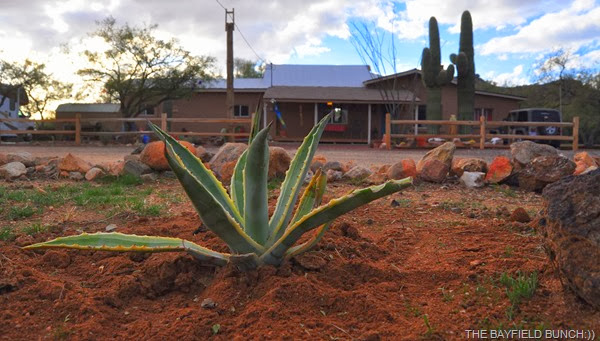 Each day when I begin my post I always type the day’s name in the blog’s title space.  For instance I typed in ‘Friday Post’ for the temporary title today.  Helps keep me organized.  Last thing I do before hitting my post’s ‘Publish’ button each night is to think up & add a title to my post.  Wednesday night I forgot to do that & my post ended up simply titled…..Wednesday Post.  And now you know. 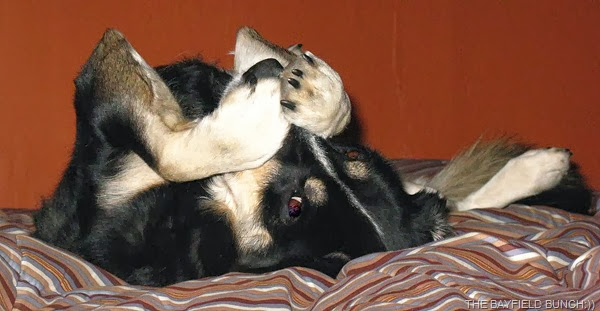 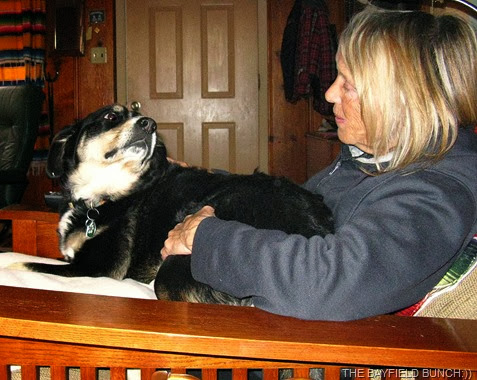 THIS PRETTY WELL SUMS UP OUR LAZY MAINLY INDOOR DAY

If one is a traveler it bodes well to have an Airline pilot in the family.  Most of us are not that fortunate but the folks over at JUST FINDING OUR WAY not only managed to get themselves on an inaugural flight to Alaska for Christmas but had their Son at the controls of the airliner for the flight.  Now how nice is that. 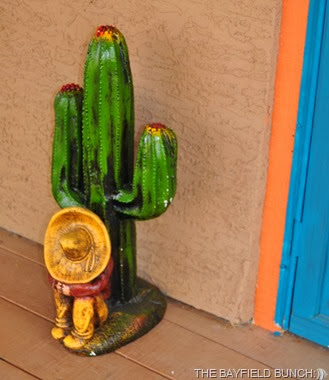 And remember, if you are a horse person who enjoys trail riding & you are in the south central area of Arizona be sure to keep an eye on John’s DOG POUND SOUTH blog for some great scenic riding areas.  John often includes maps & always has some great trail riding photos as well.

On closer examination of the horse skull Kelly picked up under a row of Mesquite trees over at Sarge’s place I think I have an idea how the poor horse died many years ago.  There is a small almost round hole in the skull between the eyes.  I think the horse may have been shot.  It’s the way of the old wild West.

Les phoned tonight saying he would be over first thing in the morning to install our Pine porch posts.  That is if it isn’t raining.  Will be nice to have that little project finally completed. 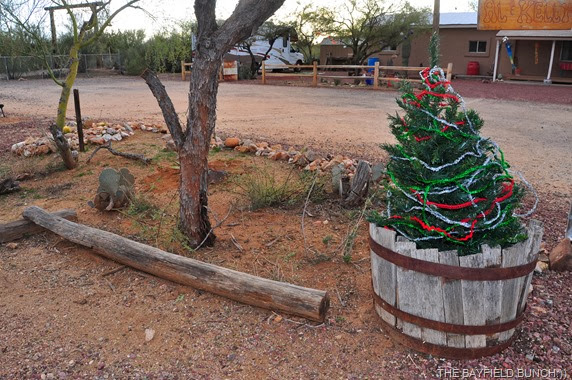 Am wondering if anyone has had problems with blogs disappearing off their Blog Follower/Friend Connect gadget.  Kelly asked me tonight if I had taken ‘THE GOOD LUCK DUCK’ off our sidebar list.  I had not.  Kelly later saw a Facebook note from Roxanne saying her blog had disappeared off some peoples blog lists.  Several times over the years I have gone through my Blog Follower list & removed some folks who no longer blogged or maybe hadn’t blogged in a year or so.  But I have also had blogs disappear off there as well & twice the entire list did not show up.  Occasionally I will come across a blog or a name I recognize as once being on my list but when I have checked they were gone.  Just wondering if anyone else has had this happen. 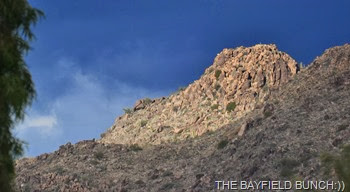 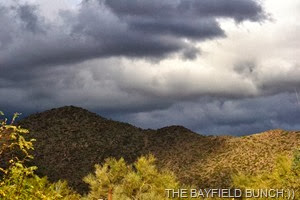 A few posts ago I made mention of a few Cactus plants we have here that I thought were dead from being eaten or trampled on over the summer.  Some of those plants are struggling their way back to life so I took a few photos today of their resurrection.  Also just remembered someone asking about the color of the dirt we have been bringing home.  Yes, it’s real desert dirt.  If I dig a hole for anything on our property the dirt is always the same color as the dirt we have been trailering home. 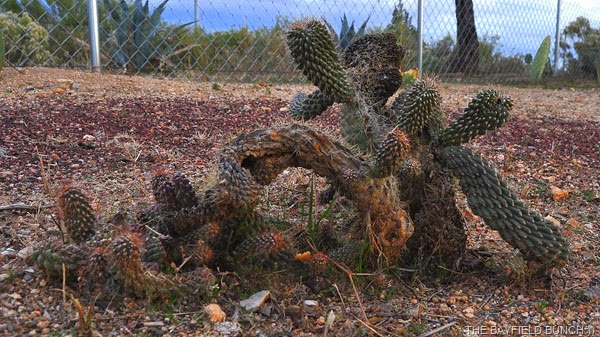 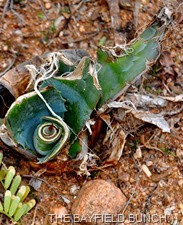 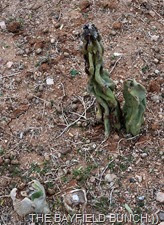 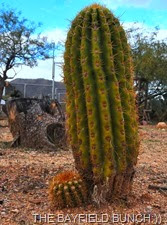 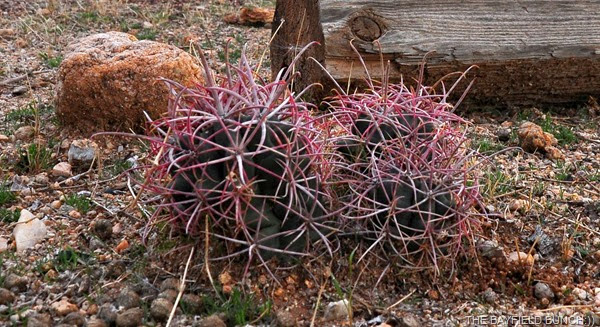 As our afternoon progressed our Eastern sky continued to darken & became about as black as I have ever seen a stormy sky become.  Checked the radar & could see a storm moving from over Phoenix way heading for Prescott.  Weather site said we had a 50% chance of rain tonight.  Of course any talk of rain always sends us scrambling to close doors & vents in the rig, gather up the lawn chairs, & clear the front porch including Spencer.  Jeep windows up too.  We get so little rain here it always catches us by surprise & we have to do some running about.  Sounds like we could be in for a cold wet Friday.  When I opened the front door tonight to take Pheebs out I knew immediately it had rained.  No, couldn’t see it & no I couldn’t hear it.  But I could smell it.  The desert always gives off a pleasing distinct sweet smell when it rains.  It is the Creosote bushes that add to that. 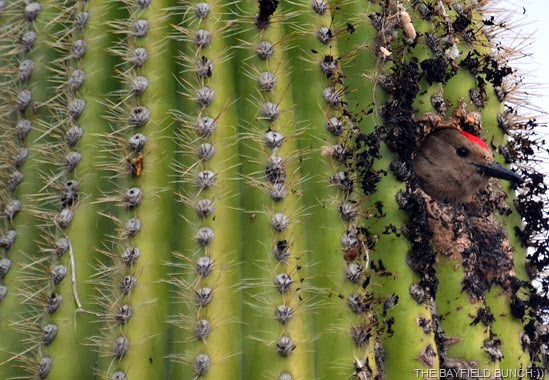 GROANER’S CORNER:((  In a small southern town there was a "Nativity Scene" that showed great skill and talent had gone into creating it. One small feature bothered me.

The three wise men were wearing firemen's helmets.
Totally unable to come up with a reason or explanation, I left.  At a "Quik Stop" on the edge of town, I asked the lady behind the counter about the helmets. She exploded into a rage, yelling at me, "You Yankees never do read the Bible!" I assured her that I did, but simply couldn't recall anything about firemen in the Bible.
She jerked her Bible from behind the counter and ruffled through some pages, and finally jabbed her finger at a passage. Sticking it in my face she said "See, it says right here, 'The three wise man came from afar.'"