WEST OF GARY INDIANA TO DES MOINES IOWA…LOOKING FOR A POWER CORD!! 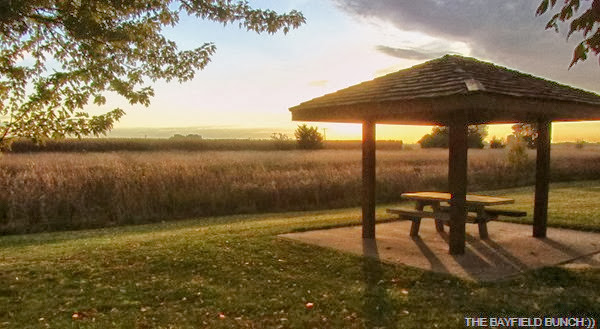 As expected, we were up early & on our way a few minutes before 6 a.m.  Grabbed a tank of gas just up the road from Cracker Barrel.  Apparently I had myself a little misplaced Saturday night to where we actually were.  Said in my post we were in Gary Indiana but Gary was behind us.  We were in a place called Tiny Park which I figure is somewhere between Gary & Chicago.  Knew the traffic would be light on a Sunday morning so we breezed right along with no problem.  Chicago was somewhere north of us.  Wouldn’t want to be in this area on a week day morning or after 3 in the afternoon.  Would not be good!! 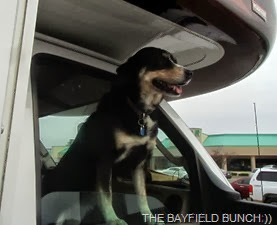 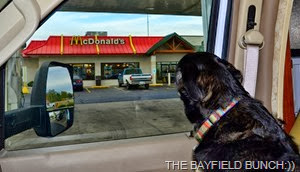 Nice sunrise behind us lit up countless acres of Illinois cornfields.  Could see we were approaching a large cloud bank & before long our sun was gone & it remained cloudy for the rest of the day.  No winds, no rain, bonus. 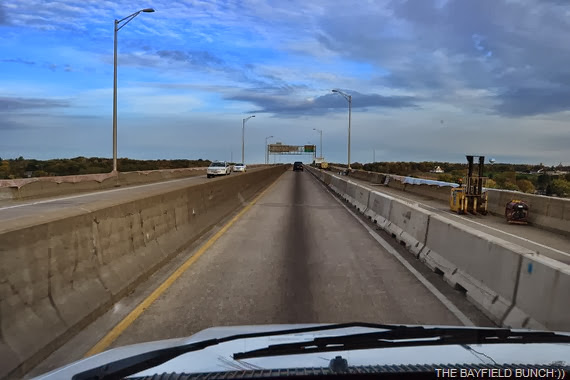 BRIDGE ACROSS THE MISSISSIPPI RIVER WAS UNDER CONSTRUCTION 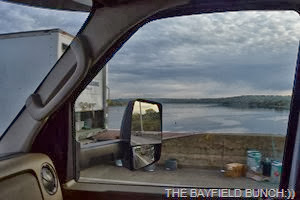 Had to put an extra pillow on my driver’s seat because of a tender rear end from kicking myself in the assparagus for leaving my Toshiba laptop power cord at home.  Right there beside my recliner!!  Without a power cord my laptop was useless because I had drained what was left of the battery Sunday night publishing my post.  Kelly figured we might have a chance of buying another power cord at Best Buy or Walmart.  Coming into the east end of Des Moines Iowa on I-80 Kelly used her ‘Next Exit’ book to determine there was a Walmart at interchange whatever.  There was, but they did not have a power cord.  The book showed a ‘Best Buy’ about another 20 miles up the road so up & off I-80 we went.  Headed south on something-or-other road but did not see a Best Buy.  Spotted an Office Depot so swung in there to have a looky see & maybe they could tell us where Best Buy was.  But ‘Bingo,’ Office Supply came through.  They had a cord with multiple adaptors & sure enough I’ll be darned if one of them didn’t up & work just fine.  My blog was back in the running:))))))) 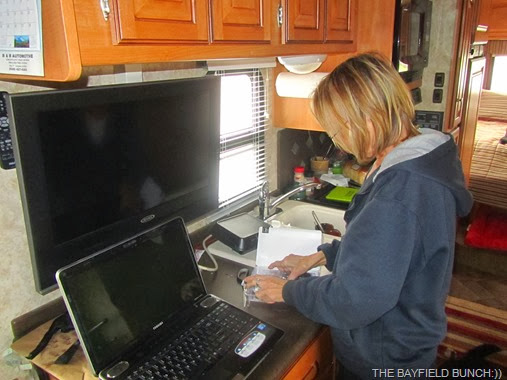 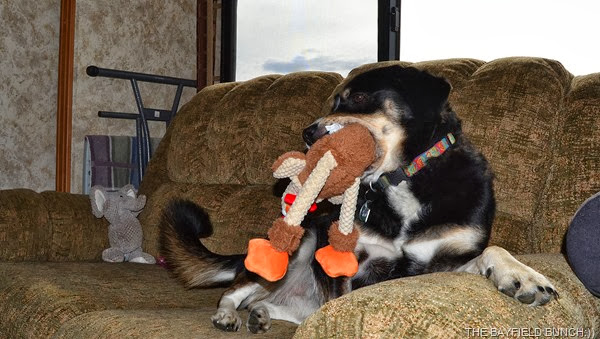 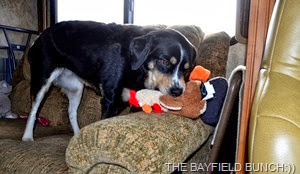 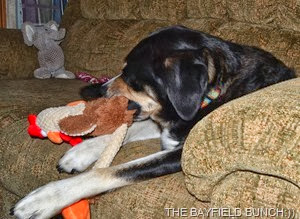 WHEN PHEEBS GETS BORED WITH ALL THE DRIVING SHE GETS OUT HER FUNKY CHICKEN TO PLAY WITH….photos by Kelly:))

Carrying on half a dozen more exits we decided to call it an early day around 2 p.m.  Well Kelly decided anyway.  She had determined there was a fair size mall complex with a Lowes & Home Depot.  They are good for spending the night in plus we wanted to have a look for some gravity chairs to take to Congress.  But we sure got ourselves frazzelated in trying to find the interchange that led to the mall.  I don’t do well when I get frasselated!!  At one point we were headed for Kansas City & at another point we were headed back the way we had just come.  It was somewhere between those 2 stress points I was wishing I was at home stretched out relaxing in my big comfy stress free recliner. 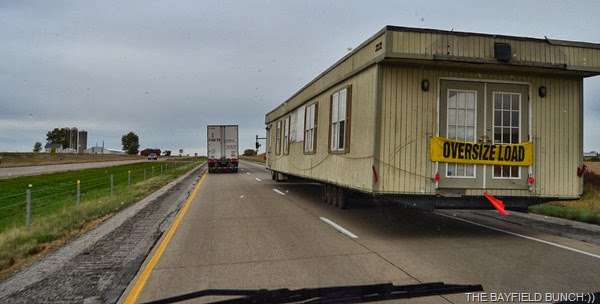 MUST BE ONE OF THOSE CRAZY RV’ERS HEADING WEST

Toughest part of the trip so far has been the !!!%&*# technical stuff.  Hasn’t been good reception for our Sirius satellite radio, only thing our CB radio has picked up so far is dust, & our cigarette adaptor Ipod has been a challenge.  And then there’s the television.  Kelly poured a huge amount of time into trying to get it programmed to receive channels with our aerial.  No problem in our previous 2 rigs but with all the cables for the roof satellite dish plus DVD home theater system & three remotes to run everything Kelly had a hard time figuring out the correct confliguration conblomeration.  Finally a yellow cable was spotted not plugged in.  ‘Walla’ that was it.  Happy Campers again:)) 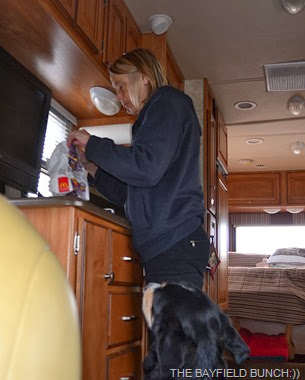 <<< WORKING ON SOME SNACKS IN OUR TRAVELING GALLEY

To run our TV we have to have the generator on for the time being.  Will be so glad when we are once again solar equipped.  Do not like having to run that generator but it only had slightly more than 9 hours on it so guess I shouldn’t complain.  We sure have a lot of tweaking to do to get ourselves back to the comfortable state we had in the Damon.  But I remember oh to well all the diskaboobalarations we head in getting things figured out & configured correctly in the Damon too.  All part of RVing.  All part of exchanging our routine little sacks of problems in for different little sacks of routine problems……10-4:)) 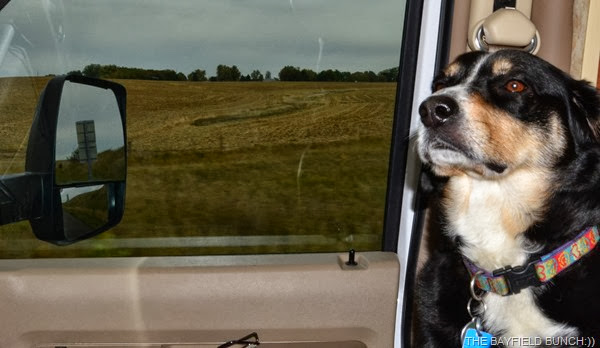 And for supper tonight we had the same thing we had the night before at Cracker Barrel.  We always manage to salvage enough of our Cracker Barrel endeavors to re-heat & have the next day for breakfast, lunch, or supper. 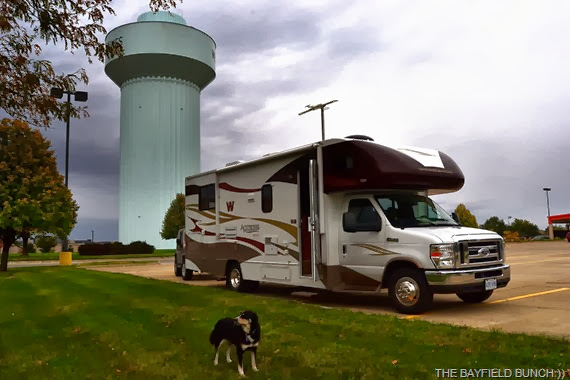 OUR OVERNIGHTER SPOT IN A HOME DEPOT PARKING LOT

Looks like Iowa’s weather is going to hold together just long enough for us to squeak through to Nebraska.  Weather & temperatures will determine where we go from there. 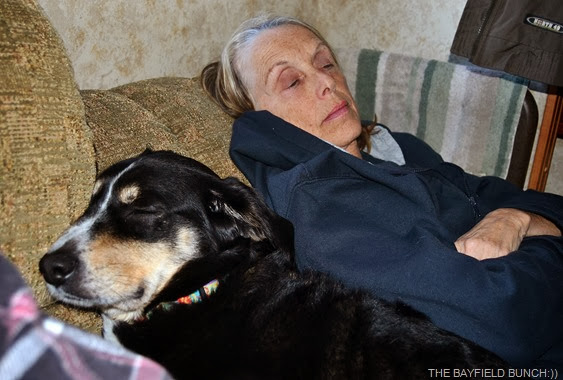 A SLEEPY ENDING TO ANOTHER LONG DAY

GROANER’S CORNER:((  Did you know an Archeologist could be described as a man whose career lies in ruins & an Atheist as a person with no invisible means of support.  But, not to worry because middle age is a time in everyone's life when actions creak louder than words.