A SKUNK JUST SET OFF A BIG STINK BOMB UNDER OUR HOUSE!!!! 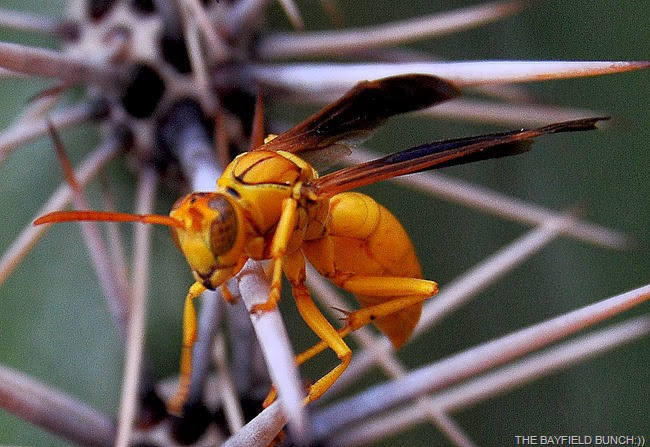 When I took Pheebs out tonight & had a look to the sky I was fortunate to spot the International Space Station going over.  Have seen it many times years ago so recognized it’s familiar glow & steady movement across the night sky right away.  How nice to see the Milky Way again & all the stars.  Oh my, all those wonderful stars I have not seen since leaving here last April.  And the pulsating fast moving moving lights darting amongst the stars.  Fighter pilots in their F16’s on dog fighting night maneuvers.  I could hear them all day & see the white puffs of markers in the sky but never did catch sight of one as they dodged & dashed around & around through white puffy clouds. 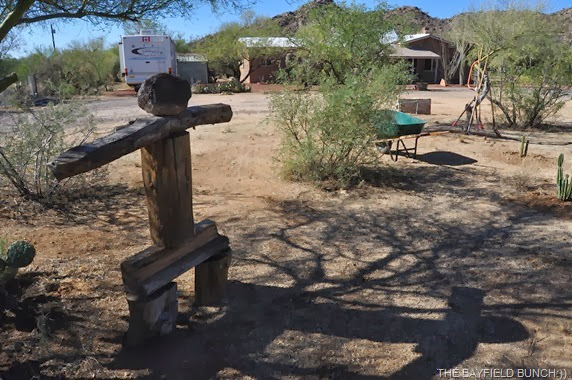 THIS WAS CACTUS MAN A YEAR AGO

Gordon in our Shout Box is right about the overall cost of fuel being cheaper traveling from west to east.  We have always noticed that as well.  Last Spring on our 4 day necessity rocket ship trip home in the 23’ Sunseeker our fuel bill was $900.  Of course we took the shortest possible Interstate route as well up through Oklahoma City & St. Louis.  I believe Interstate travel is cheaper on fuel in the long run.  Cut’s way down on the stopping & starting of secondary roads & small towns.  Personally I prefer secondary roads but if one is in a hurry to reach a destination Interstates are the way to go.  Heading east one always has a good chance of tail winds.  Our trip to Arizona last week was a longer route & put us into some mountain driving over around Trinidad & Santa Fe.  I’m sure that attributed to our gas mileage numbers as well.  Luckily we never ran into any kind of head wind the whole trip.   And, I think Chevy engines are probably better on fuel consumption than Fords.  Commenter Camille explained that when she said………….. “I sell RVs at Camping World of Tampa and just want to back up your comment about the V-8 in the Damon having more pep than the Winnie V-10. In your case, it is true, the V-10 in a class C puts out 305hp where your Vortec was rated at 340hp. However, in today's class A's, the newer Fords have a "beefed up" engine and chassis, so your Challenger with today's engines would have 362hp. Class C's have not been changed”. 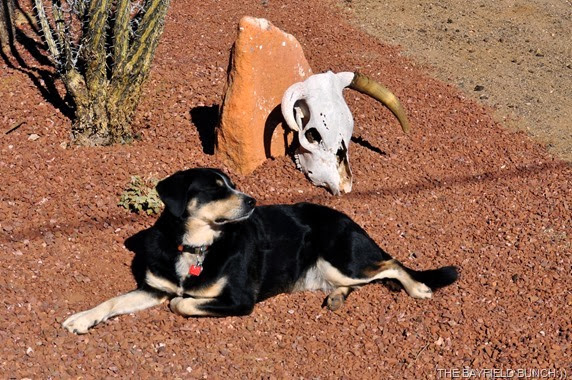 Commenter Teri had a couple questions as well…..”Just curious, if you are not getting better gas mileage in the new rig - why did you downsize to a smaller rig that is not as comfortable and that you will now have to pay to add solar to the new rig”…….Well that’s a darn good question.  Easier to drive & park for Kelly – brings us up to 2011 from 2003 meaning less maintenance in the long run.  I have absolutely no interest, skills, or patience for trying to fix older aging vehicles.  Tires, exhaust systems, shocks, brakes, etc are less expensive on a Class C chassis as well.  Not as high a profile as a Class A.   And a smaller unit is easier to keep clean.   And I really appreciate having my own easy in & out driver’s door.  That’s a biggy.  Anyway, those are just a few of the pluses for a C.  There are pluses for A’s as well & cons for both. 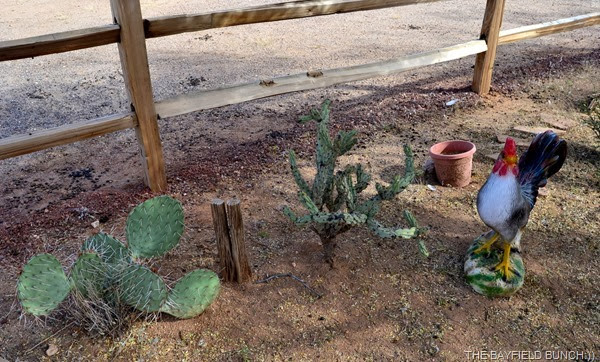 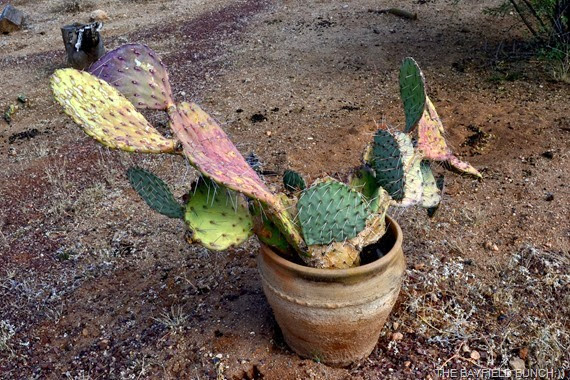 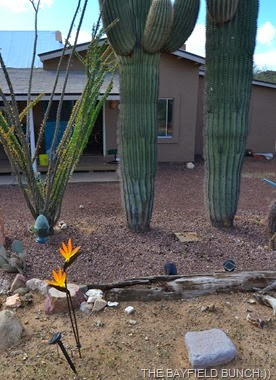 AND MONICA’S GARDEN NIGHT LIGHT HAS FIT RIGHT IN JUST FINE, JUST HAVE TO REDO THAT WRECKED-UP LITTLE CACTUS GARDEN >>>

Also, wondering about something in an earlier post - your description of the Ford engine gearing down automatically - I have the Ford E450 engine and I change to 3rd, or sometimes 2nd on my own when going downhill - am I missing something?…..Engine only does that when one is driving with their Tow/Haul feature engaged.  Otherwise in normal driving mode the engine will not gear itself down.  In our Winnie the towing button is in the end of the gearshift.  In the Sunseeker & Damon the button was on the dash.   When towing something of weight the button should be engaged. 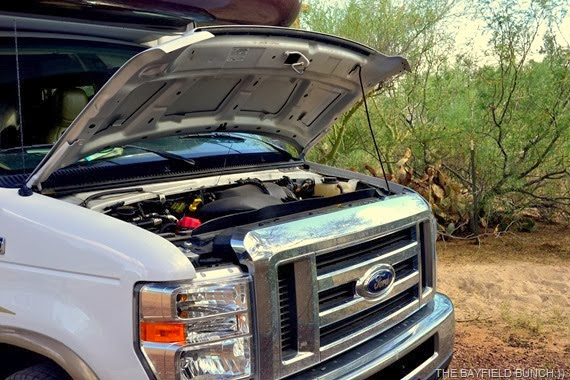 I might have been a little hasty blaming our neighbors sheep for the total destruction of our cactus plants.  Talked to that neighbor this morning & he said yes the Sheep did eat some of the Cactus which surprised him.  Said the main culprit in the destruction of our Cactus plants were the large desert squirrels living under our house.  Said he saw 3 of them this summer dragging cactus chunks back to their lair there.  I now remember friends of ours up the road telling us about all the problems they have with with those Devil Squirrels on their property.  They shoot them on sight.  Apparently these Squirrels are very nasty customers.  And we do know for sure we have critters under the house at the moment because we can hear them.  Could be Skunks, Pack Rats, or large Demon Squirrels.  We are in the process of trying to figure out right now how to get rid of them. 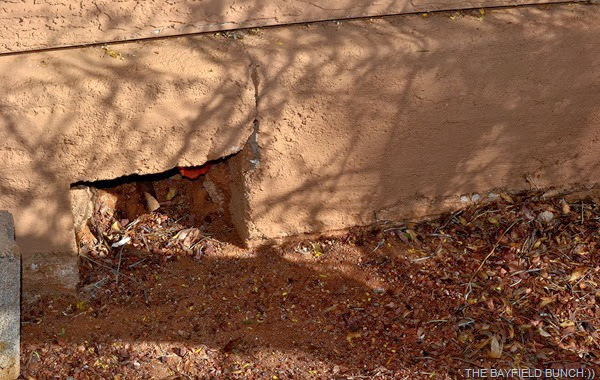 Mathew our Sheep fellow said he is going to do a major cut back on his Cactus plants shortly & would give us all the cuttings we want.  It’s not the standard Prickly Pear cactus he has, it’s something different.  Much bigger pads & will grow 10 to 12 feet high.  Exactly what I want. 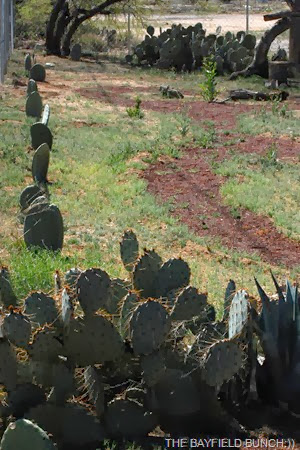 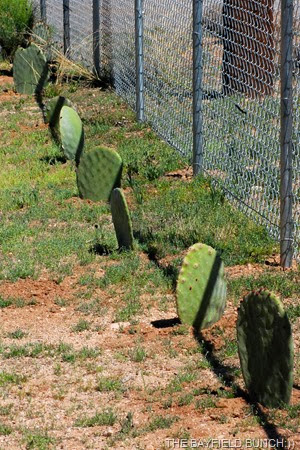 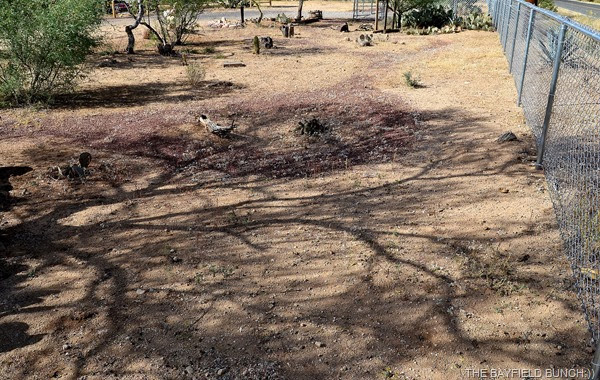 Realistically we cannot grow anything else here except hardy Cactus plants.  Reason we can’t grow other things is simply because we are only here 6 months of the year.  To grow things I really like we would have to be here all summer to water & chase critters away.  And that just isn’t practical.  We don’t want to have to pay someone to just come in & water plants here either.  Arizona is a very dry & arid place & here in Congress we pay for every drop of water we use.  So we are limited to Cactus plants or anything that is native to the surrounding desert & will survive on it’s own. 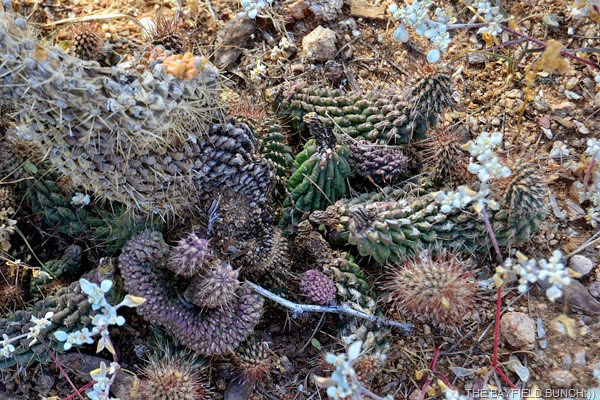 DESPITE BEING TRAMPLED I SEE NEW GROWTH HERE FOR THIS CACTUS 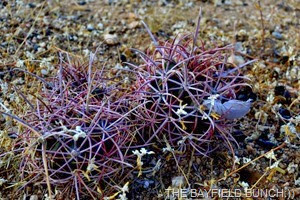 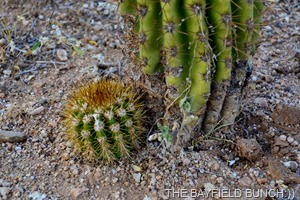 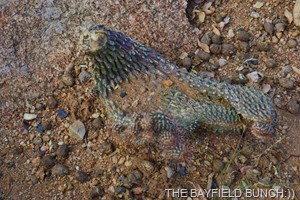 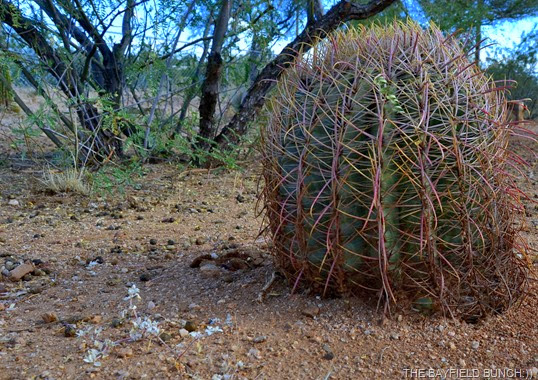 I keep a pail in my washroom.  It takes exactly 13 glasses of water from my sink’s hot water tap to finally get hot water.  I don’t like running water down the drain for nothing so I fill the first 10 glasses of cold water plus 2 glass of warming water & dump them in my pail.  Also set the pail in the shower & run the shower head water into it until I have the temperature correctly adjusted before stepping into the shower.  I then use that pail of water to water things outside.  It’s a win/win situation. 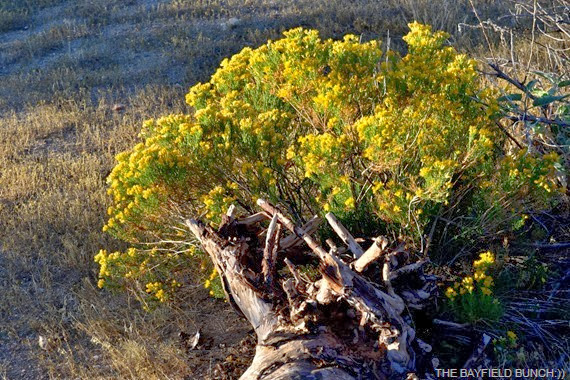 NICE TO SEE THESE YELLOW FLOWERS IN THE DESERT

Jeep wouldn’t start this morning.  Stone dead.  Jumped it with a 700W portable charger we carry.  Let the Jeep run for half an hour.  Went to start it a couple hours later & it was stone dead again.  Jumped it a second time.  We bought the 2006 Jeep in June of 2010 & have no idea how old the battery is.  Cables are tight on the posts.  If it doesn’t start I’ll jump it in the morning & head for the Congress garage.  Do not want to run the serious risk of an old battery not starting way out in the desert somewhere. 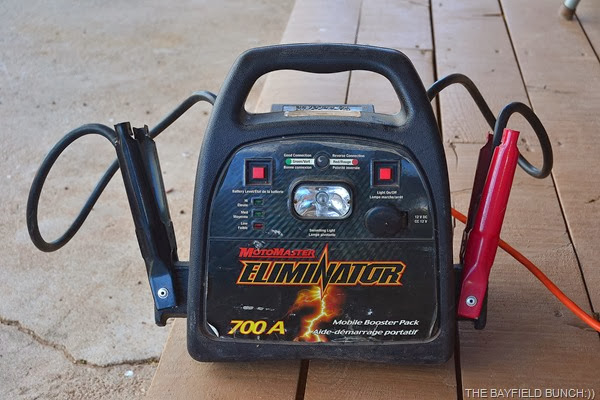 Got last week’s flat tire out of Winnies storage bin so will see what the fellow has in used spares.  Or should we replace that spare with a new Michelin?   Three of my bird feeders are now up so we’ll see how long it takes the feathered gang to notice a new food source.  Spring on our screen door broke.  Fixed it.  Fired up my weed whacker & it wore me out in about 10 minutes.  Could take me a year trying to deal with the weeds that way.  Anybody out there got a good cheap lawnmower that will start every time on the first pull?  A lawnmower would be the best way to deal with the type of weeds we have.  As much as I hate the noise & unreliable starting ways of small gasoline engines I guess I may have no choice but to use the infernal things!! 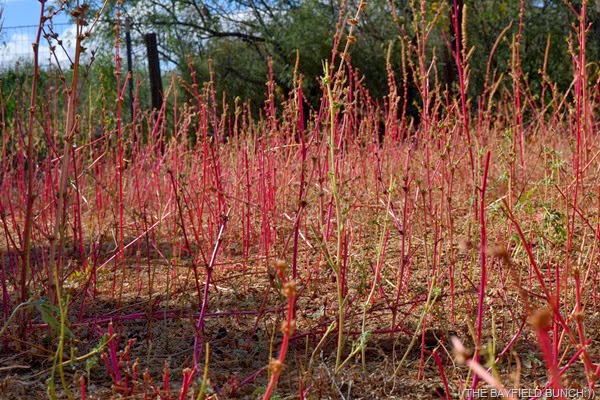 A LAWN MOWER WOULD MAKE SHORT WORK OF THESE GUYS

In Bayfield I use our desktop computer to change my header photo periodically with no problem.  Not so when I tried it Sunday night with my laptop here.  Did all the same things I do with the desk top but could not get the photo to fit the frame.  Tried again today but gave up in frustration & eliminated the header photo entirely.  Any ideas? 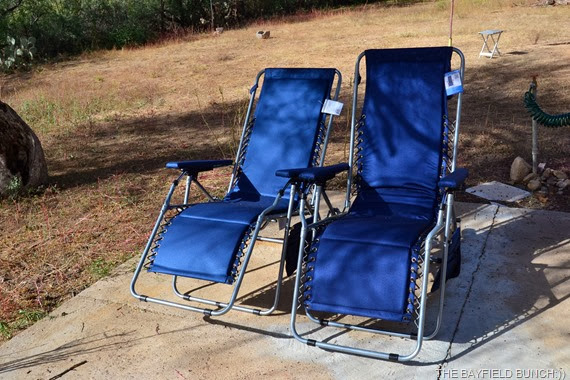 CHAIR ON LEFT IS GOING BACK TO CAMPING WORLD

One of our Camping World Gravity chairs has an assembly mistake & Camping World has agreed to take it back & reimburse us.  Going to get another Gravity chair at Wickenburg’s Ace hardware & use the box to return our faulty one to Camping World.  Also going to look into either Direct or Dish TV & get rid of our Canadian Shaw provider.  Would like to have a dish mounted on the house & be done with this mobile satellite stuff once & for all.  We have a dome TracVision set-up in our Winnie Wagon so would like to have the same programing for that as our house.  Kelly’s working out the logistics.  I’m working on another peanut butter & honey sandwich. 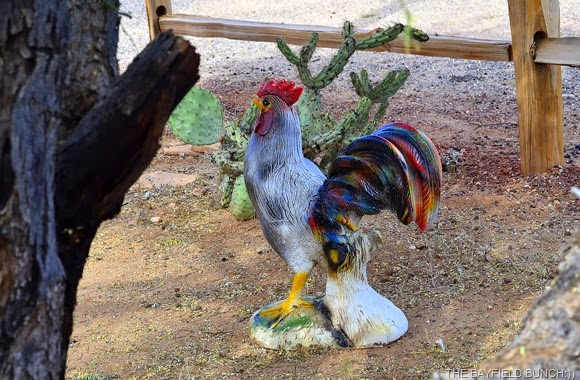 As I sit here tonight just about ready to hit the ‘Publish’ button a strong pungent skunk odor fills the house.  Kelly said I smell a skunk.  Me too.  A couple hours ago she had partially blocked that hole with a cement block.  I figure it is a skunk we have been hearing & when he came to go out tonight he found his entry way partially blocked, panicked, & let off a big stink bomb right under our house.  I cautiously slipped outside with a flashlight & unblocked the hole so Stinkbomb Louie LaPew can get out.  I will go back later & block the hole hoping that he is out somewhere foraging around for some grubs.  He’s gonna be really ticked when he comes back & his entryway is blocked.  He just might blast a big load of skunk juice all over our whole house. 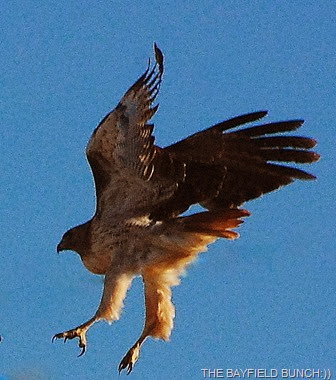 GROANER’S CORNER:((     A young couple drove several miles down a country road, not saying a word.
An earlier discussion had led to an argument, and neither wanted to concede their position.
As they passed a barnyard of mules and pigs, the husband sarcastically asked, "Are they relatives of yours?"
"Yes," his wife replied. "I married into the family."