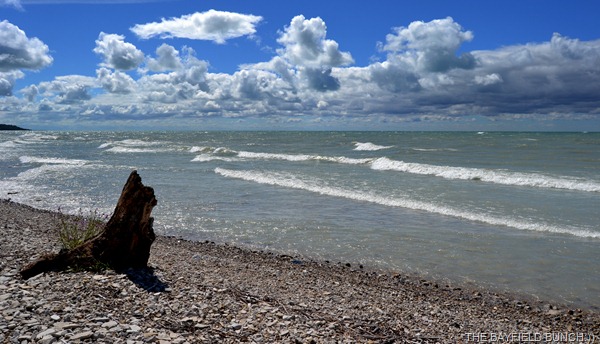 By the time we got up this morning the answer to our recliner question was pretty clear to us. With all our focus on 'chair recliners' these past few months we had never given a lot of thought to 'loveseat recliners' & that is why we missed the obvious answer sitting right here at home just a few feet away in our own living room. Wasn't until we looked at wall hugging love seat recliner's at La-Z-Boy in London Wednesday that we suddenly realized we already have a like new wall hugger right here in our own living room.  Been here all along.  Bought our BERKLINE loveseat recliner about 7 years ago along with a matching recliner chair for Kelly. Neither Kelly or I ever did use the loveseat simply because we both have our own recliners.  Our loveseat recliner only has about 3 hours of human sitting time on it over the years. Readers have no doubt seen the loveseat recliner many times in my photos with Pheebs snuggled up or stretched out on it. All this time we had what we were looking for right under our noses. And it's going to be a better fit than the La-Z-Boy leather one would have been. And here's the most best part of all.................it's already been long ago paid for:)) 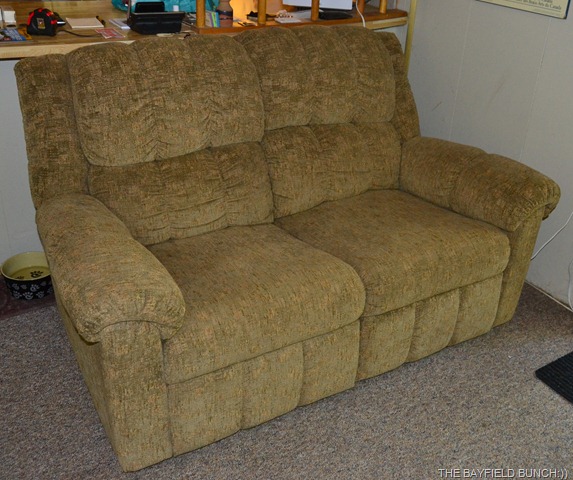 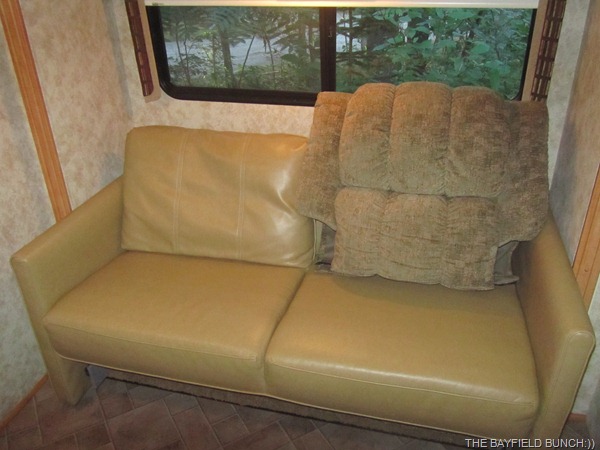 Figuring this is what we would likely do I sent Ron Krauter from FOUR SEASONS PERFORMANCE an email Wednesday night wondering if he might be interested in the couch/air bed that was currently in the Winnebago. A couple phone calls with Ron this morning & we fired up the rig & headed off to Grand Bend Ontario. Ron is the fellow we bought our 2003 Damon Challenger from back in April of 2007. He said he would take that couch/blow-up bed out for us & sell it on Kijiji.

Rolled into Ron's place about 10:45 & minutes later he & his helper Scott were hard at work removing that couch/bed. Didn't take them long to figure things out, unbolt the couch from the slide, (16 bolts) disconnect the air bed hoses, disassemble the couch & move it out of the rig. 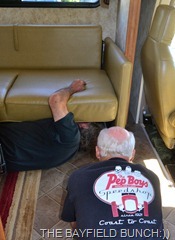 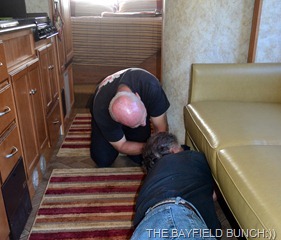 THE BOYS ARE HARD AT IT

Ron & Scott are a couple of super guys & always a wealth of RV knowledge & information. Ron always goes the extra distance for his RV customers & has treated us exceptionally well over the years.  We called him when we spotted our current rig for sale in London back in April & he suggested we grab it.  Called it a ‘Smokin Deal’:))  When it comes to friendly personalities it's pretty hard to beat these guys. They are are the Senior's version of Energizer Bunnies. If your not feeling good about things when you go there you will feel a whole lot better about things before you leave there. These guys just have that positive energy about them. Anyone in our area looking for an honest RV dealer, I highly recommend you drop around & see Ron. If he doesn't have what your looking for he will go out of his way to find it for you. And you know he is always going to treat you fair.   Tell him the Bayfield Bunch sent you:)) 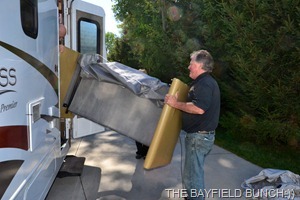 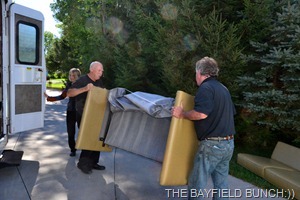 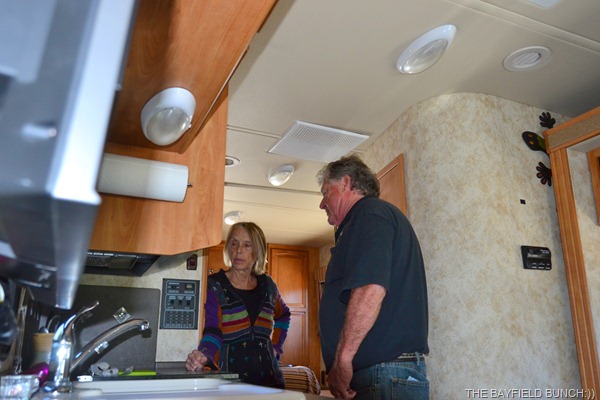 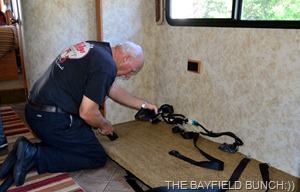 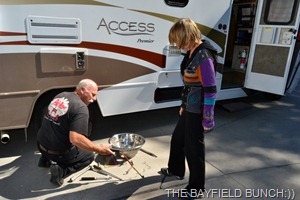 Picked up a few groceries in Grand Bend & we were back home again shortly after 1 this afternoon. We have a professional upholstery cleaner coming Tuesday morning to do our living room carpet & he will do our Berkline loveseat recliner as well before we put it in the Winnebago. Things are finally coming together. 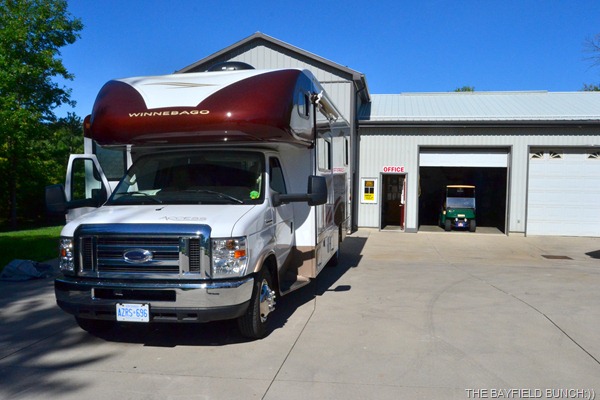 Short post tonight because I'm heading out for coffee with one of my 2 best friends. Our coffee blow-outs have a tendency to be lengthy so figured I'd better publish my post early.

GROANER'S CORNER:((  A man placed an ad in the classifieds: "Wife wanted."
The next day he received a hundred letters.
They all said the same: "You can have mine."
---

Joe was a single guy living at home with his father and working in the family business. When he found out he was going to inherit a fortune when his sick father died, he decided he needed a wife with whom to share his fortune.
One evening at an investment seminar he spotted the most beautiful woman he had ever seen. Her beauty took his breath away. “I may look like just an ordinary man,” he said to her, “but in just a few years, my father will pass, and I’ll inherit his large fortune.”
Impressed, the woman took his business card and three months later, she became Joe’s stepmother.
Women are so much better at estate planning than men!!
-------------------------------------------------------------
- Tourists see the world, travelers experience it.
- Home is where your pet is:))
- "If having a soul means being able to feel
love and loyalty and gratitude, then animals
are better off than a lot of humans."
(James Herriot)
- The pessimist complains about the wind; the optimist expects it to change; the realist adjusts the sails -William Arthur Ward
- The only thing better than right now will someday be the memories of right now...AL.
- It is not so much having nothing to do as it is not having the interest to do something....AL.