WE DID NOT GET THE ANSWERS WE WERE LOOKING FOR TODAY:(( 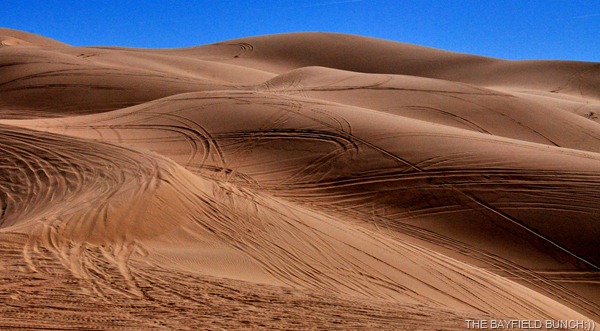 IMPERIAL SAND DUNES NEAR GLAMIS CALIFORNIA
Nice response from readers to Mr. Lizard guy. Our South West colorful Earth toned Lizard is mounted on an inside non movable wall with about an inch clearance as the slide comes in. It is cleverly designed & not just flat like many wall hangings that have a tendency to swing back & forth in a moving vehicle. It has a flexible concave shape with a single fastener. I put a small flat head screw in the wall & pressed the Lizard fastener over the screw & shifted the Lizard slightly locking the screw & the Lizard together. Releasing the Lizard enables the tin fastener to push back against the screw head therefore causing opposite tension to hold the Lizard against the wall. Seems pretty solid but if not we may have to strategically place a few small tabs of Velcro. I have a feeling it's going to be just fine the way it is.  Glad y’all liked it & it was only $21.95 which I though was a great price for that.  The BAYFIELD BERRY FARM has lots more Lizards, Frogs, etc for sale hanging on the walls.  Groovy:)) 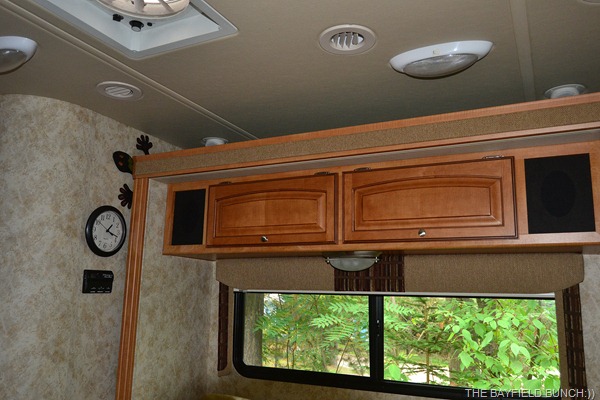 THIS IS HOW MR. LIZARD GUY LOOKS WHEN THE SLIDE IS IN…HE’S JUST KINDA PEEKING OUT
Had the Motorcycle out for a short toot this morning. What a great bike this is to ride & every time I am out on it I think there is 'no way' I should even be thinking of selling it. No problem with the bike itself, the problem is me. Once I'm on the bike I'm good to go but it's getting myself interested enough to get on the bike & go somewhere in the first place that’s my problem. 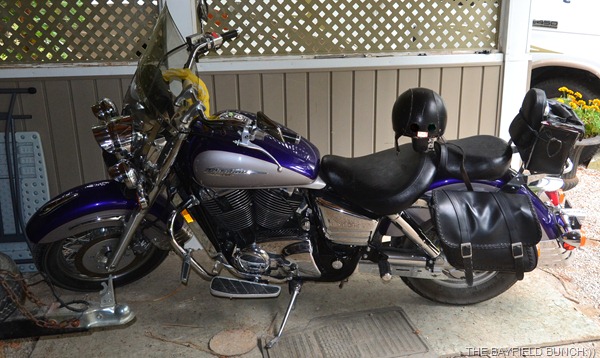 Had a foggy start to the day as I headed for Clinton to see Dr. Bukala about my past marginally elevated PSA tests. Good news this morning. Said I'm slightly high for someone my age but the numbers have remained constant since 2012 & in fact were down slightly with my last blood test a few weeks ago. I'm cleared for travel:)) He has scheduled my next PSA test for late next April. 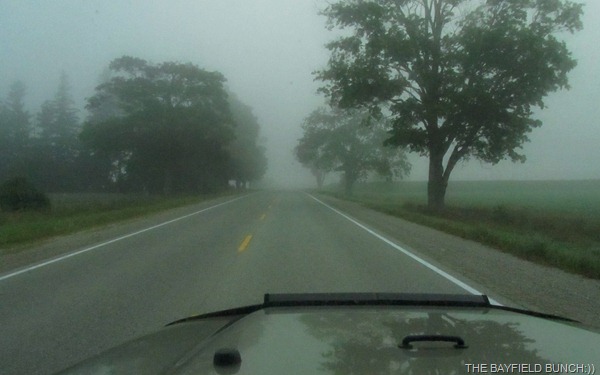 Humidity was high today but it remained cloudy which helped considerably by keeping old Sol's hot rays from reaching us. Me in particular. With Jeep windows part way down we endured the muggy weather hours drive to Stratford.   We later drove home in rain. 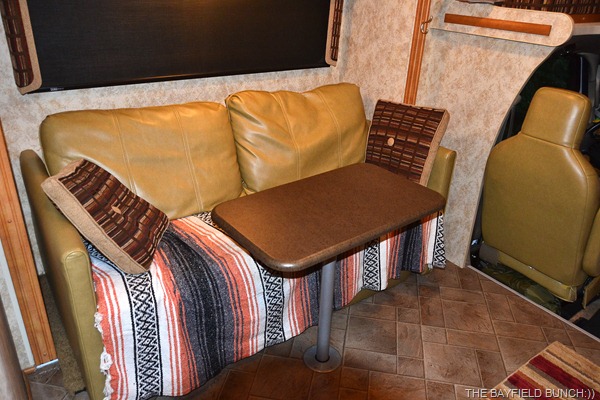 DONNA FROM THE CAVE DWELLERS WONDERED IF WE HAVE A KITCHEN TABLE & YES WE DO,..IT’S VERY PORTABLE & CAN EASILY BE SET UP & PUT AWAY 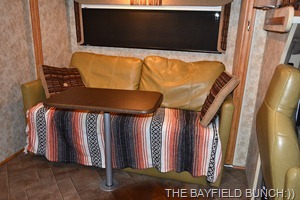 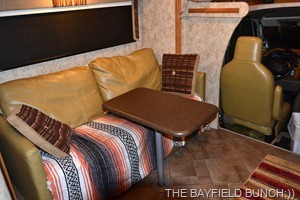 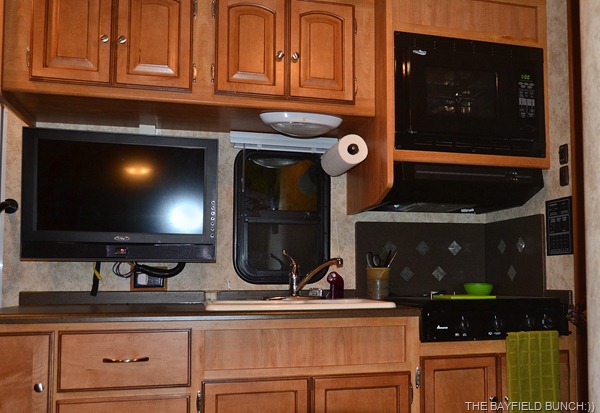 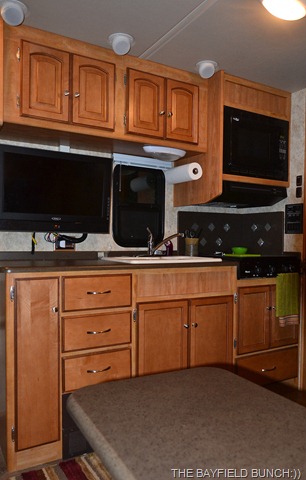 We were at the Stratford General Hospital in good time for Kelly's appointment at 3 p.m.  Doctor Haffner & another Doctor in training called us in about 3:05.  We had been hoping for some solid answers today especially after Kelly’s liver biopsy a few weeks ago.  We did not get what we were hoping for.  Two separate Pathologists read the biopsy report & both concluded the test was………’inconclusive’,"insuffcient specimen".  Said they did not have enough information from the few small liver samples that were taken.  We are no further ahead today than we were weeks ago.  In Layman’s terms deciphering what the Doctor said, Kelly basically underwent that painful biopsy for nothing.  It simply was not done properly.  Bottom line is Kelly will probably have to undergo another liver biopsy but next time it will be done in London Ontario by a team of professionals who know what they are doing.  The Specialist in London who Dr. Haffner wants Kelly to see has just returned from summer holidays.  An appointment with this man is in the works for as soon as possible & it will be this London Specialist who decides whether Kelly has another liver biopsy or not.  There are 3 things that positively point to PRIMARY BILIARY CIRRHOSIS which Kelly is suspected of having.  She has two out of three & the biopsy was supposed to confirm & make the third confirmation.   In the meantime Kelly goes again in the next couple days for more bloodwork & another Echocardiogram next week.  They did do an ultra-sound today checking for fluid around the heart & lungs.  None was found.   Bottom line is that we are once again WAITING for another appointment which this time will be at the prestigious University Hospital in London Ontario. 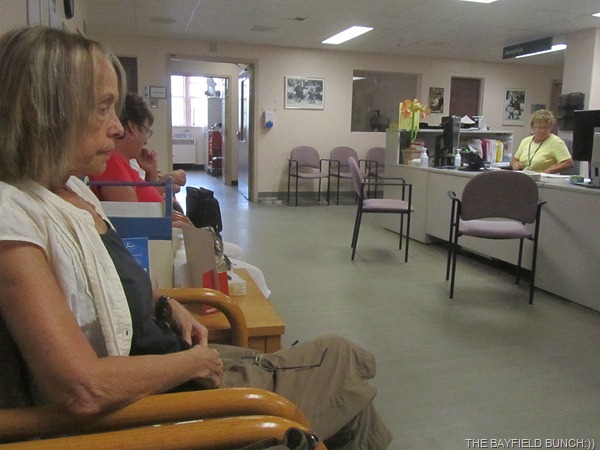 KELLY WAITS PENSIVELY IN THE WAITING ROOM
We decided today on a departure date for the South West.  All things being equal we hope to leave Saturday October 19th.  Haven’t decided on which route we will take this year but I might be leaning towards slipping through Chicago & heading out across the plains again.  Of course it will depend on weather.  We have used this route several times before taking different routes once west of Chicago.  I’ll have to get my head buried in my Atlas again & see if I can get a feel for where we’re going.  Our last 3 trips to the South West & back have been shotgun trips.  Two years ago leaving Congress our little Cora died the morning we left so we didn’t waste any time getting home.  A very sad journey.  Last April we again hurried home after my Uncle Harry died.  And last October we didn’t waste any time getting from Spencerport NY (near Rochester) to Congress so we could begin work on our house & property.  Once we are west of Chicago in late October & west of the Mississippi we’ll see what shapes up.  Travel plans sometimes change daily for us & I sometimes like that kind of unexpected spontaneity.  Keeps things interesting & makes for more of an adventure for us. 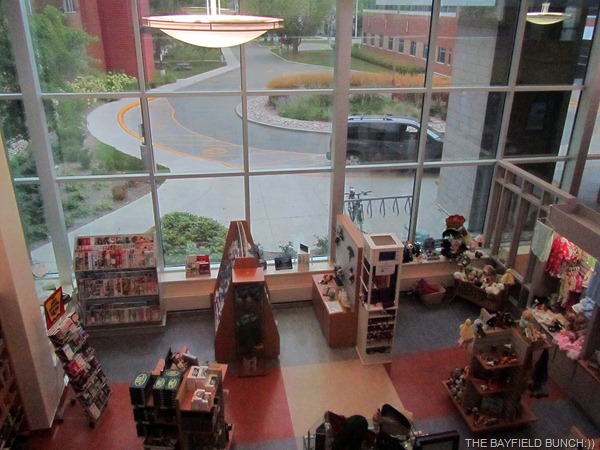 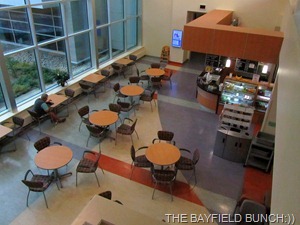 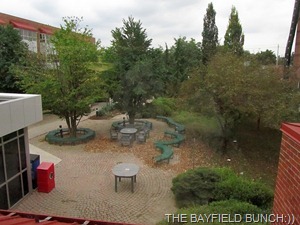 SNACK BAR JUST INSIDE THE MAIN ENTRANCE & LOOKING OUT AT THE REAR ENTRANCE GROUNDS
Think Pheebs & I might take the Winnie Wagon for a spin in the morning.  Maybe slip up to Goderich & top up the propane tank.  It’s always mentally uplifting for me to take the RV for a drive.  Maybe crank up some tunes so Pheebs & I can do some howling & yodeling. 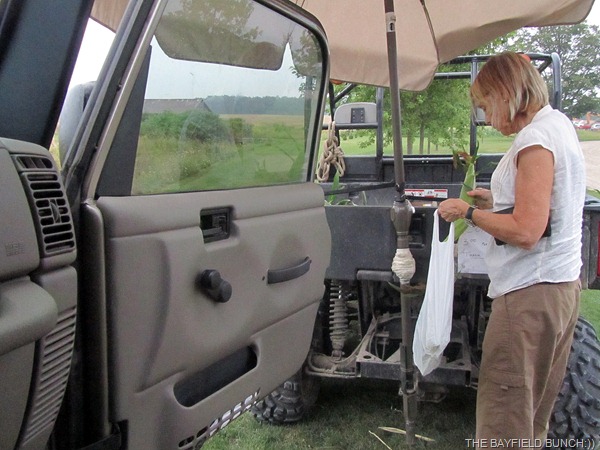 STOPPED AT A FARM TO PICK UP SOME SWEET CORN ON THE WAY HOME…KELLY EATS THIS STUFF BY THE TRAIN CAR LOAD…ME NOT SO MUCH
Note to commenter SallyB…..Was talking to Aunt Jean tonight & she was wondering if you live in Sarasota Florida.  She’s doing OK but again has had to shorten her morning walk up a bit.  And with all the rain in Florida she has not been to the golf course in quite awhile. 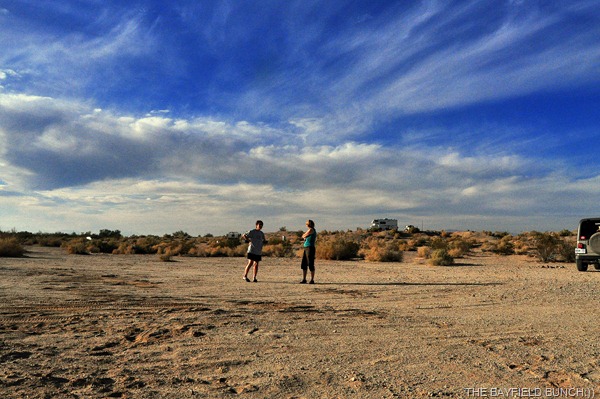 BUMPED INTO SOME OLD RV BLOGGING FRIENDS IN SLAB CITY CALIFORNIA A COUPLE YEARS AGO…KELLY TALKS TO RENEE
I particularly liked Sue’s thoughts & feelings about her years of blogging here in our little community of RV Bloggers.  Well written & from the heart.  It’s entitled Time & Effort & can be found here at BIGDAWG AND FREEWAY.

GROANER’S CORNER:((   FROM A RETIRED HUSBAND - After I retired, my wife insisted that I accompany her on her trips to the Target Store.  Unfortunately, like most men, I found shopping boring, and preferred to just "get in and get out."  Equally unfortunately, my dear wife is like most women - she just loves to browse.  Yesterday, my dear wife received the following letter, from the local Target Store:-
Dear Mrs. Jones:- Over the past 6-months, your husband has caused quite a commotion in our store.  We can't tolerate this behaviour, and have been forced to ban both of you from the store.  Our complaints against your husband, Mr. Jones, are listed below, and are documented by our video surveillance cameras:-
July 2nd:- Set all of the alarm clocks in Housewares to go off at 5-minute intervals.
July 7th:- Made a trail of prune juice, on the floor, leading into the Men's Rest-room.
July 19th:- Walked up to an employee, and told her, in an official voice, "Code 3 in Housewares. Get on it, right away."  This caused the employee to leave her assigned station, and receive a reprimand from her Supervisor.  That, in turn, resulted in a Union Grievance, causing Management to lose time, and costing the Company money. We don't have a Code 3.
August 4th:- Went to the Service Desk, and tried to put a bag of M&Ms on Layaway Purchase Plan.
August 14th: Moved a "CAUTION - WET FLOOR" sign over to the carpeted area.
August 15th:- Set up a tent, in the Camping Department, and told the children shoppers that he'd invite them in, if they'd bring pillows and blankets from the Bedding Department, to which 20 children obliged.
August 23rd:- When a clerk asked if they could help him, he began crying, and screamed, "Why can't you people just leave me alone?" EMTs were called.
September 4th: Looked right into the Security Camera, and used it as a mirror, while he picked his nose.
September 10th:- While handling guns, in the Hunting Department, he asked the clerk where the antidepressents were.
October 3rd:- Darted around the store, suspiciously, while loudly humming the "Mission Impossible" theme song.
October 6th:- In the Auto Department, he practiced his "Madonna's Bra Look," using different sizes of funnels.
October 18th:- Hid in a clothing rack. And, when people browsed through, yelled, "PICK ME. PICK ME."
October 22nd:- When an announcement came over the loud speaker, he assumed a fetal position, and screamed, "OH, NO. IT'S THOSE VOICES AGAIN."
Took a box of condoms to the Checkout Clerk, and asked where the Fitting Room was?
October 23rd:- Went into a Fitting Room, shut the door, waited awhile, then yelled, very loudly, "Hey! There's no toilet paper in here."
Sincerely, Your Local Target Store.
-------------------------------------------------------------
- Tourists see the world, travelers experience it.
- Home is where your pet is:))
- "If having a soul means being able to feel
love and loyalty and gratitude, then animals
are better off than a lot of humans."
(James Herriot)
- The pessimist complains about the wind; the optimist expects it to change; the realist adjusts the sails -William Arthur Ward
- The only thing better than right now will someday be the memories of right now...AL.
- It is not so much having nothing to do as it is not having the interest to do something....AL.
Posted by Al Bossence at 8/27/2013