RESTING MY FOOT WHILE WATCHING RURAL SCENERY ROLL BY:)) 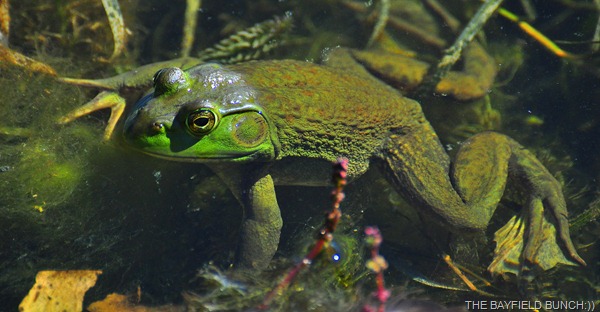 Decided it might be best to rest my foot so opted out of our morning walk. In hindsight I don't think that was too smart of me to walk the trail Thursday:((  Kelly, feeling better this morning headed off with Pheebs for a 20 minute walk. Swelling continues to go down & she is feeling much better. 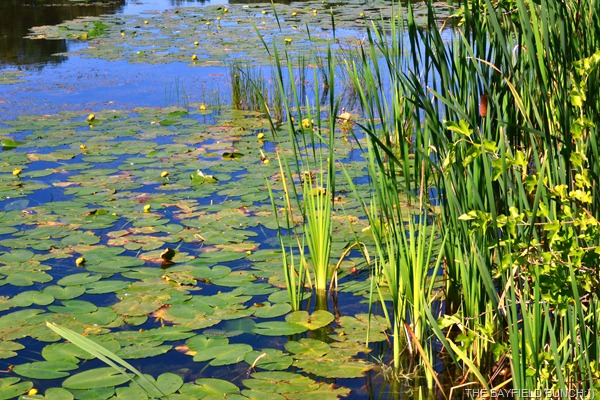 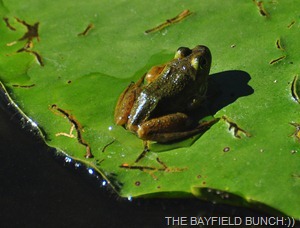 I sometimes wonder if we would do as many walks if we didn't have the Pheebers. Probably not. Often thought that when we had Max, Checkers, & the Motormouse too. Even if we didn't feel like walking sometimes the guys always got us going. Every day they gave us a purpose. It is just one of the many great reasons for having a dog. A best Pal to walk & do things with. Pheebe puts a smile on my grouchy face every single day:)) 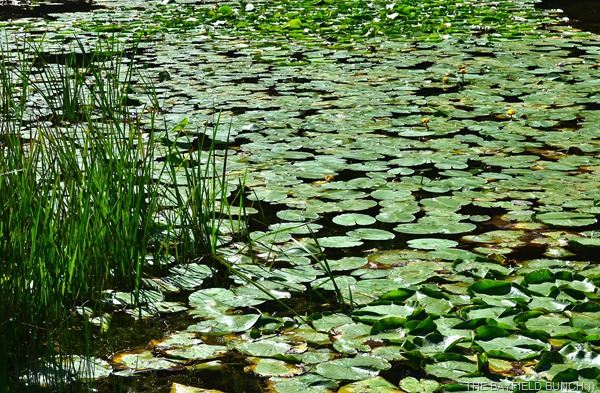 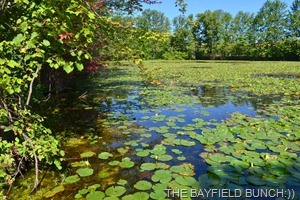 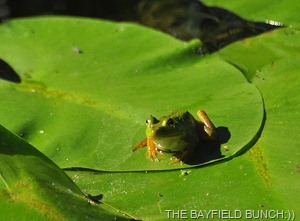 My restlessness this summer has been at an all time high so as soon as Kelly headed off to the Maitland Medical Clinic this morning Pheebs & I were out the door & into the Jeep. Figured if I had to sit & rest my foot I would much rather sit in the Jeep with rural scenery going by. Had another great sunny morning going for us & had it not been for my sore foot we would have headed off for a hike in the Hullett Marsh. 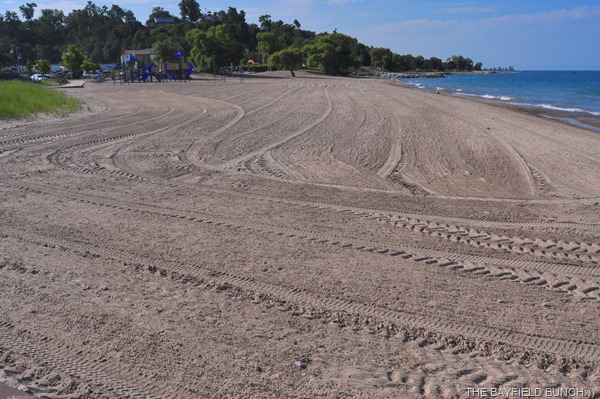 GODERICH’S BEACH, A WOODEN WALKWAY & ROAD STRETCHES FROM HERE TO THAT FAR POINT OF LAND IN THE DISTANCE & AT THIS END THEY KEEP THE BEACH GROOMED
Made our way to Goderich where I stopped into the TSC store to have a look at their Kodiak hiking boots. I was in one of my cheapskate modes again so after looking at the $129.00 price tag I was quick to exit myself out of the store. Next stop was the Solo gas bar across the road where Pheebs knows she always get's a treat from the gas attendant. Didn't spoil her appetite for McDonald's though. I confused the young girl taking money when I paid for our stuff with $2 bills. They have been out of circulation for quite awhile now here in this Canada place. Slipped down around the harbor, grabbed a few quick photos & off out into the countryside we went. Ahhhhhhhhhhh:))

GRAIN ELEVATORS ON LEFT, SALT MINE COMPLEX CENTER, & A LAKE FREIGHTER THAT HAS BEEN DOCKED THERE FOR A FEW YEARS NOW 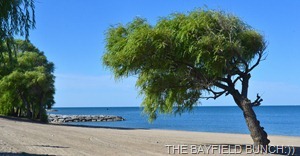 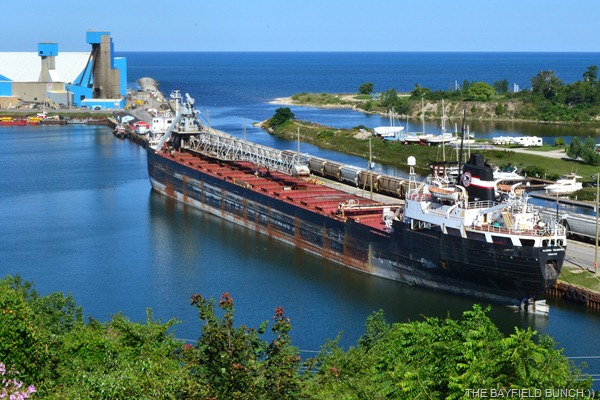 THE MAITLAND RIVER EMPTIES INTO LAKE HURON JUST TO THE RIGHT OF THE SALT MINE
Our destinationless travels kept us entertained for most of the morning. Pheebs got to chase some frogs around at a pond & I got to enjoy a few hours of freely wandering about soaking up country scenery. Sure wished we had some nice mountain trails in our area though. I miss our South-West mountains & think how now nice it would have been to hike the places in Colorado where Mark from the BOX CANYON BLOG captures his eye popping photos. Just not sure if Kelly or I would be up to those long strenuous hikes though. We would both have to be in a lot better shape than we are right now. My hip/leg problem has been on it's best behavior for about a month & half now but I know if I pushed it I could be in trouble again. It still tweaks me occasionally enough to let me know not to get too rambunctious with myself.   Damn, how I hate this aging crap!!

IT’S HARVEST TIME & COUNTRY ROADS HAVE A LOT OF LARGE FARM MACHINERY ON THEM…INSTEAD OF TRYING TO SQUEEZE BY I ALWAYS JUST DRIVE THE JEEP DOWN IN THE DITCH & LET THE BIG GUYS GO BY…APPRECIATED BY THE FARMERS & FUN FOR PHEEBS & I TO DRIVE IN THE DITCH:))
Seem to recall a question from Gay & Joe over at GOOD-TIMES-ROLLIN about how I got that frog/toad photo in Thursday's post. Short simple answer to that question is.....a 300mm lens. Same lens as today's frog pics. Someone else asked where have all our front yard bird's gone? Wished I knew but I think It has something to do with the time of year again. Seems to me there were a couple other questions from folks rattling around in my Noggin but I have been unable to retrieve those memory cells at this point. 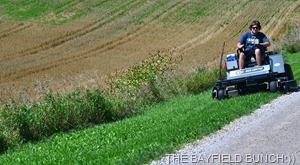 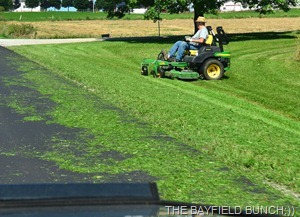 FARM FOLKS EVEN MOW DITCHES ALONG COUNTRY ROADS IN MANY PLACES
Hooked up a magnetic Sirius Satellite Radio antenna the other day in the Winnie Wagon. Have the same type of antenna on the Jeep so it's easy to just move the satellite radio itself from vehicle to vehicle. After installing the antenna I hooked up the radio & ran through some channels to check reception. In doing so I came across another radio channel I like. Been listening to channel 068 'The Spa' for a few years now but always wished they would play a little less long hair music & more funky stuff. Now I have 'Chill' on channel 053 & yep, it's funkier. 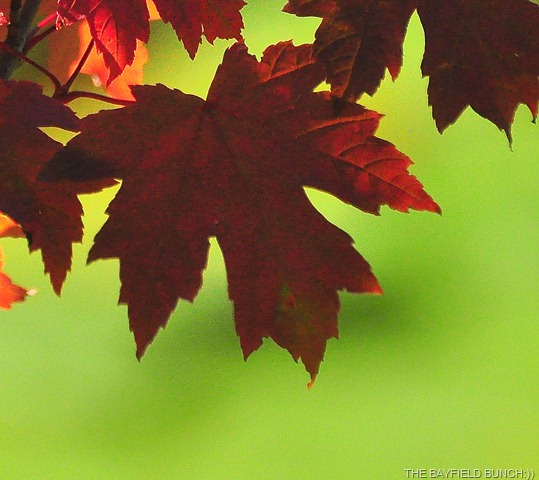 GROANER'S CORNER:(( In the men's room at work, the boss placed a sign directly above the sink.  It had a single word on it: "Think!" The next day, when he went to the men's room, he looked at the sign, and right below it, immediately above the soap dispenser, someone had carefully lettered another sign which read, "Thoap!"
-------------------------------------------------------------
- Tourists see the world, travelers experience it.
- Home is where your pet is:))
- "If having a soul means being able to feel
love and loyalty and gratitude, then animals
are better off than a lot of humans."
(James Herriot)
- The pessimist complains about the wind; the optimist expects it to change; the realist adjusts the sails -William Arthur Ward
- The only thing better than right now will someday be the memories of right now...AL.
- It is not so much having nothing to do as it is not having the interest to do something....AL.