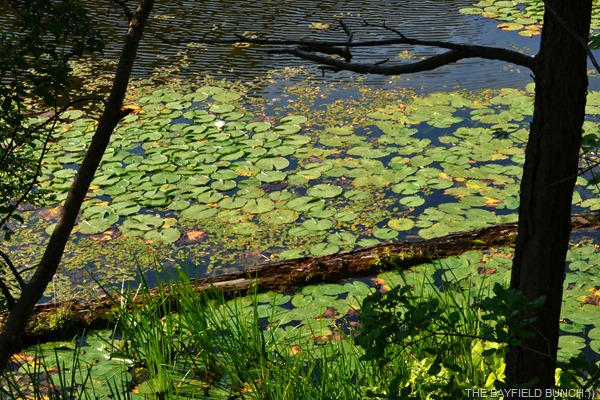 Went to bed Monday night with a sore hip, achy legs, & a sore foot. Woke up Tuesday morning completely pain free. Hip was fine, no aching & stiffness in my legs, & no soreness in my left foot. It was as if I had been given a lower body transplant while I slept. There sometimes seems to be no rhyme or reason as to why things are the way they are but why would I wake up free of pain all of a sudden? Another one of life's little mysteries. Or, maybe not so mysterious at all.  Maybe some of those meds readers advised me to try are taking hold:))  Due to some pain returning to my right hip Monday afternoon I had already decided I would not be doing any more yard work for awhile.  Figured after 3 straight days at home Pheebs & I were needing a change of pace & a little fresh country air. Also needed a few things at Walmart so we were out the door & down the road before 9. 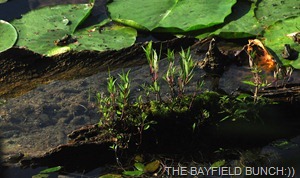 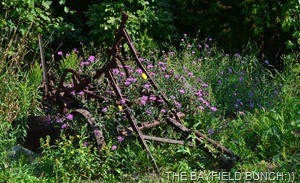 Readers will be happy to know we once again by-passed McD's & Tim Hortons. Grabbed ourselves a 6" sub & remembered to tell the lady, 'no cheese' this time. I have never been a cheese eater. Some Gatorade & water to wash it down & we were good to go. Knew we wouldn't be out for one of our longer 4 or 5 hour jaunts because we are into a short hot spell at the moment & already by 10 a.m. temperatures were ramping up. With higher temps come the hordes, swarms, & herds of bugs. Every stop we made we were overwhelmed by Gnats but we didn't let that stop us from a short hike in the Hullett Marsh. There are 2 old derelict iron road bridges in there & I knew we could walk to one of them in a short round trip half mile hike. Legs were feeling great so figured I had better take advantage of that & get some exercise. With my foot not giving me trouble either Pheebs & I set the Hullett Marsh in our sights as the last stop before heading home. 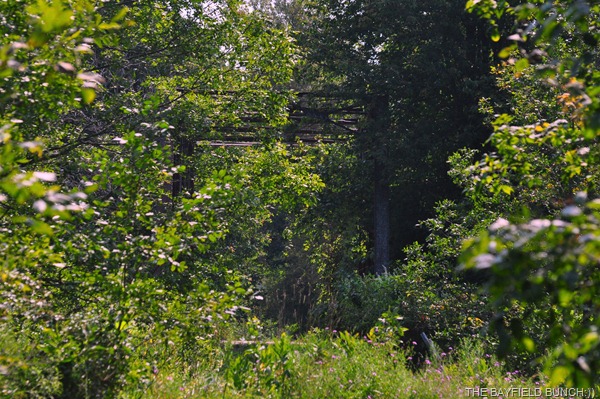 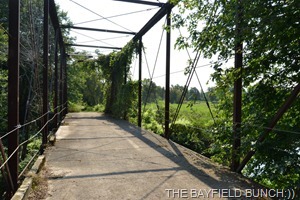 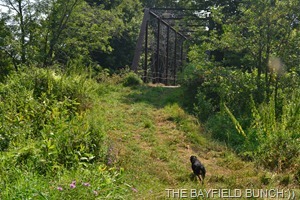 Country roads once criss-crossed this area with several iron bridges over small rivers. When the Hullett Marsh was created years ago these roads were closed forever & soon became overgrown & absorbed into the marshlands. Had been about 20+ years since I had hiked into one of those aging bridges.  Not much wrong with my long term memory & I remembered right where it was. Aside from the miserable Gnats & Mosquitos pestering us Pheebe & I had ourselves a nice hike into the bridge. A little further in from the road than I remembered but no matter. When my body tells me it wants to go for a walk, who am I to argue with it. 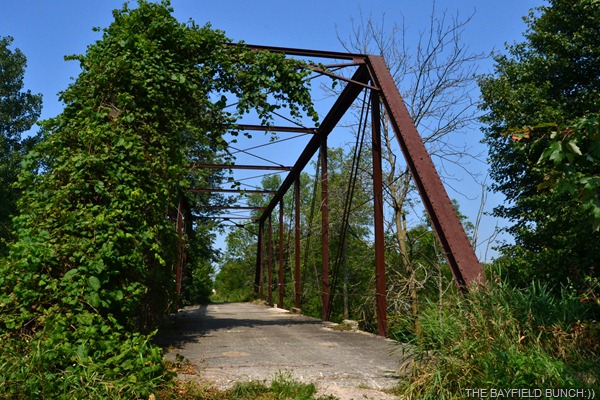 We were home shortly after noon & spent the rest of our day in the coolness of the house. In other words, we had ourselves a relaxing afternoon.  Fortunately our hot spell will be out of the area by Thursday afternoon & we will once again return to refreshingly cooler bug free weather.  So nice to hear the Autumn crickets again.  Full Moon tonight so Pheebs & I just might hop into the Jeep & drive out in the country a short ways to a favorite high spot on a gravel road & just watch the Moon come up. 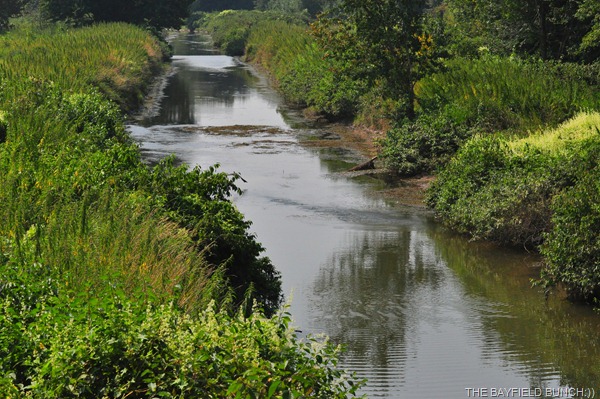 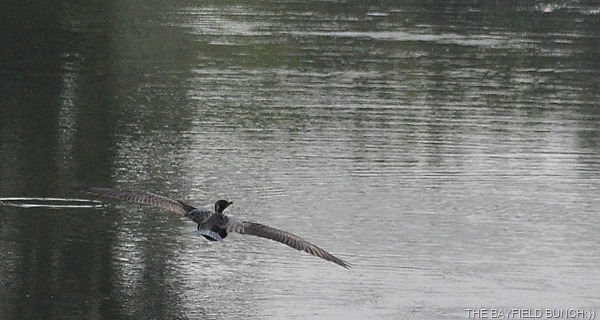 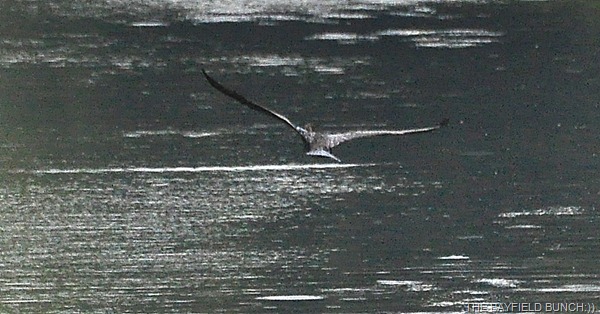 Noticed the majority of commenters on my Monday night's post understood what my 4 paragraph ‘aging’ topic was about & why. I did not feel I was 'focusing' on old age.  Simply expressing some thoughts on aging & how I perceive it to be affecting me personally. Aging is something we all deal with yet I have not seen many people writing about it. Obviously it's a touchy subject & one which people do not like to talk about.  Not always easy for me to convey my thoughts without coming across to some in a complaining, feeling sorry for oneself, naïve, or a 'oh poor me' vein. I expressed my thoughts as an observation of an aging transition having nothing to do with negative 'feeling sorry', 'naivety' or 'poor me' connotations. Reality is exactly what it is regardless of what kind of glossy spin some may choose to put on it. I basically always write my posts from a 'first person' perspective. If I write from a 'third person' perspective I am probably sliding into a style with thoughts & feelings from people who have written articles about this subject previously. I write from the 'first person' because that is the person I know best. Perhaps a definition of 'first & third' party points of view here.....-A first person point of view is the grammatical category of forms that designate a speaker or writer referring to himself or herself whereas a third person point of view means the author is describing the action that happened to someone else -- not the author himself. From time to time as I come across & personally encounter things regarding the normal & ever present aging factor & how I feel about it I will continue to express my random thoughts about it……………………. 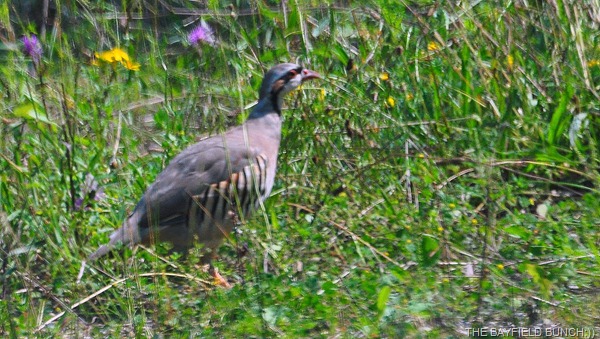 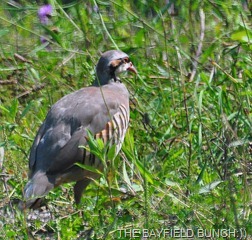 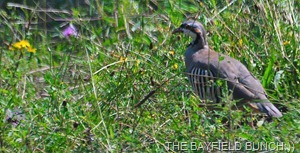 NOT SURE WHAT THIS LITTLE FELLOW WAS EITHER BUT WILL HAZARD A GUESS AT….FEMALE BLACK GROUSE

BRITBABE joins us as our latest Blog Follower today. Always nice to see folks dropping by & we welcome BB to our Bayfield Bunch site.  Stay tuned as we hope to have ourselves on the road heading for America’s south-west sometime in the next couple months 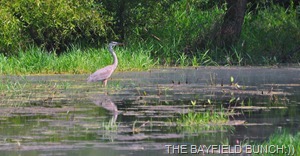 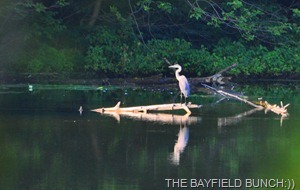 With temperatures due to reach 90+ Wednesday the day is a no brainer for me. Any outside activities will have to be wrapped up before 10 a.m. & the rest of the day I will be inside with fans & A/C going full tilt.  If I feel as good Wednesday morning as I did Tuesday morning I will try resuming my morning walks with Kelly & the fabulous Pheebs:)) 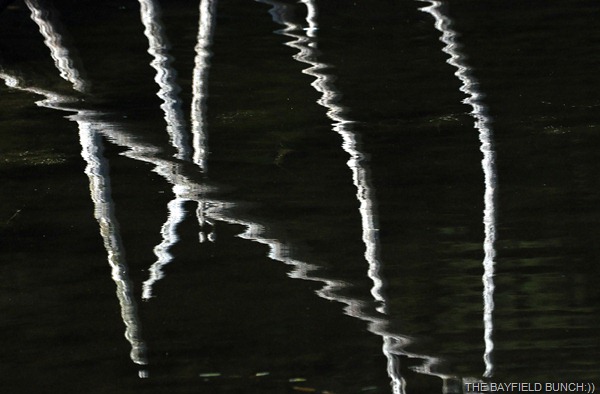 GROANER'S CORNER:(( Did you know that thanks to the Internet you can get hopelessly in debt without ever leaving your house. And remember, if you need a shoulder to cry on you can always pull off to the side of the road. My idea of a Super Bowl is a toilet that cleans itself. And guys, the first testicular guard, 'the cup' was used in Hockey in 1874 & the first helmet was used in 1974. That means it only took 100 years for men to realize their brain is important too.