KIND OF A ZOMBIE LIKE DAY & KELLY STARTS HER NEW MEDS 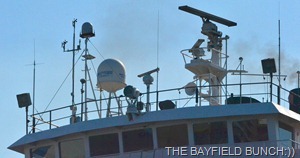 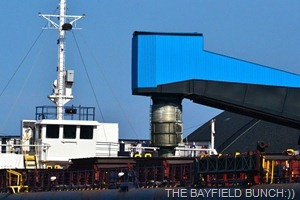 Neither Kelly or I slept well last night so it was kind of a Zombie like day.  Don’t think there is anything that gets me down faster than a poor night’s sleep.  I was curious as to how the old CPR train station move was coming along so summoned up a few scraps of energy & off Pheebs & I went to have a look.  The station has been moved from it’s old location to the new site & this morning they were preparing to move it onto it’s new concrete foundation.  Although a very slow inch by inch process there were lots of town folks lined up to watch & arm chair quarterback the whole operation.  Took a few pics & off Pheebs & went for a little fresh country air. 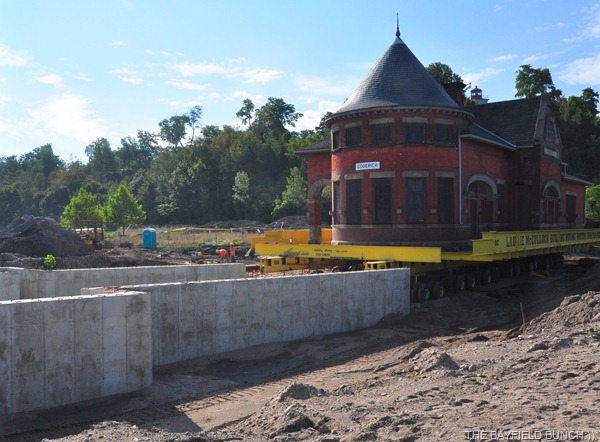 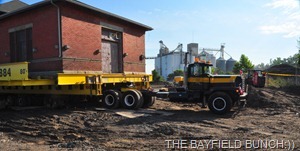 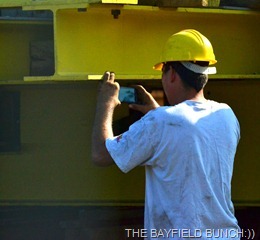 EVERYTHING HAS TO BE CHECKED, RE-CHECKED, & CHECKED AGAIN…..OVER & OVER INCH BY INCH 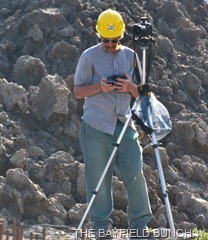 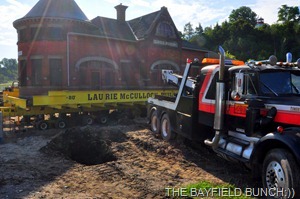 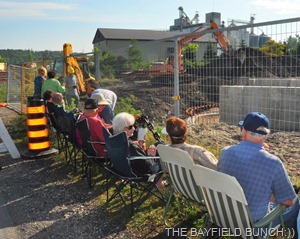 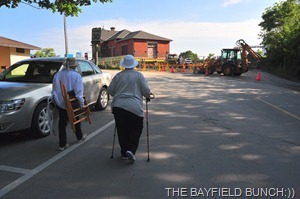 LOTS OF ‘ARM CHAIR QUARTERBACKS’ LINED UP & MORE ON THE WAY 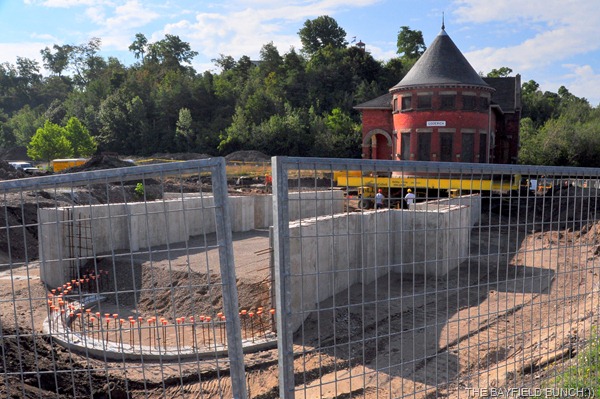 Couldn’t really get myself interested in a gravel road run so Pheebs & I were back home again in a couple hours.  Most of the rest of my day was spent in my recliner dozing off, waking up & dozing off.  Kelly phoned MICHAEL'S PHARMASAVE in Bayfield around noon & her new prescription was in.  Her URSODIOL medication is for 1 year & she has to take the pills 4 times daily.  Dr. Haffner’s office phoned this afternoon & said they have a liver biopsy appointment lined up for Kelly this coming Wednesday beginning at 9:30 a.m.  Sounds like a lengthy process & we will likely be at the hospital for most of the day. 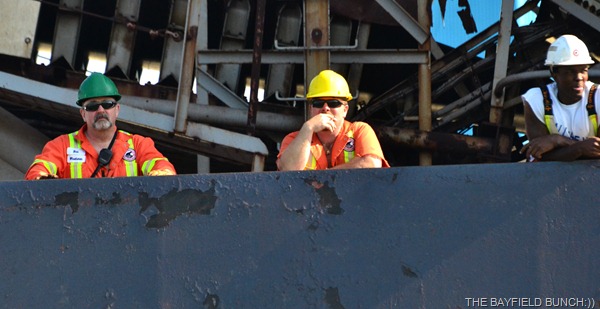 ‘OH OH’, WONDER WHAT THESE SAILOR GUYS ABOARD THE LAKE FREIGHTER ARE THINKING ABOUT 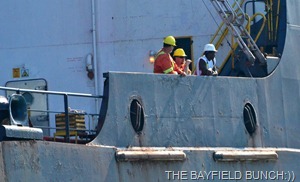 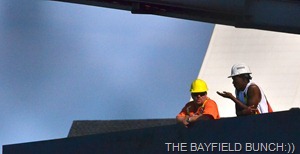 Couple things to clear up.  This is Kelly’s 4th diagnosis since first being admitted to the emergency department at the Goderich Hospital about 2 months ago.  Only 1 diagnosis has been wrong so far & that was the very first PULMONARY EMBOLISM diagnosis given to her back on April 17th of this year.  PERICARDITIS diagnosed on May 16th & PLEURAL EFFUSION diagnosed on May 23rd were correct.  I underlined the word ‘probable’ in Thursday night’s post when I referred to this latest  PRIMARY BILIARY CIRRHOSIS diagnosis.  Wednesday’s liver biopsy will likely confirm that. 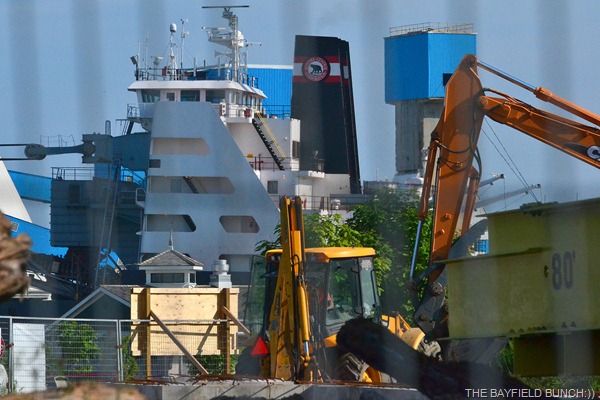 A BUSY DIMENSIONAL PHOTO:  BLUE BACKGROUND BUILDINGS ARE PART OF THE SIFTO SALT MINE, BLACK SMOKE STACKS & SHIP’S BRIDGE BELONG TO A LAKE FREIGHTER LOADING ALONGSIDE THE SALT MINE, CUPOLA ON A BEACH INFORMATION CENTER, DIGGERS PREPPING THE GROUND FOR THE TRAIN STATION & THE TIP OF AN 80’ STEEL BEAM UNDER THE STATION… THE HAZY VERTICAL LINES ARE THE CONSTRUCTION FENCING I WAS SHOOTING THROUGH

Also, Kelly is in good spirits & her health has improved substantially from those dark days back in late April, May, & most of June.  She is a trooper & unlike me, she does not let things get her down.  She always has a 24/7 great attitude & is optimistic about our travel plans this coming winter.  We talked a bit about those & some other future plans today.  We have always been a forward thinking couple…………………… 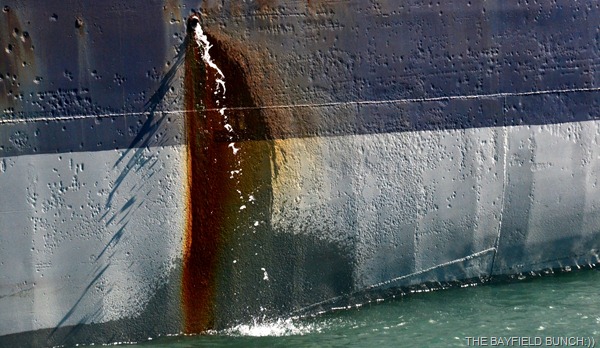 HEY, I THINK THIS BIG FREIGHTER HAS SPRUNG A LEAK

At the moment we have medical issues in front of us.  It is front & center right now so some of my posts have been & will be dealing with that.  When we are traveling my posts center around travel & when we are home here in Bayfield they center around our activities here.  Last winter the majority of our time was spent working on our Congress house & my daily posts reflected that.  When we sold & traded RV’s I blogged about that as well & when we were Ranch sitting a few years ago my posts centered around our activities at & around the ranch.  In fact, I write about what is in front of me each & every day.  My writings not only document what we physically do but more importantly deal with how we & I feel & think about things.  It is my blog & my choice what I chose to write about here & if someone does not like reading about our medical difficulties, or our boondocking lifestyle, or the colors on my blogsite, etc. etc. etc. then move on to something one does like to read about.  How simple can it be!! 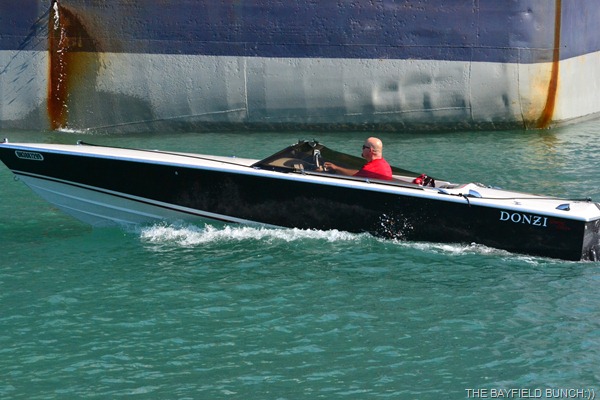 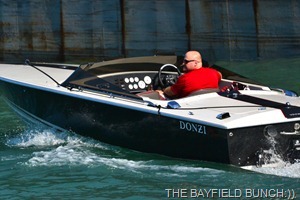 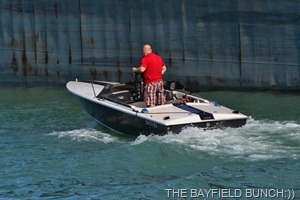 I've heard it said there are several types of criticism. Professional, Friendly, Constructive, Objective, Personal, Hostile & something new called Trolling criticism. I'm sure most folks are familiar with some of these. Friendly, objective, & constructive criticism if handled correctly can be helpful & educational. Hostile criticism however falls more into the category of finding or inventing fault. It is a mean self serving kind of criticism designed not to aid or help but to attack & undermine someone. It is to reject & to blame. It is generally believed people use hostile criticism to harass others . And I emphasize the word 'harass'. Trolling criticism is the new kid on the block since the coming of the internet. Easy for a Troll to sit behind a keyboard & continually lash out at others with sarcasm, accusatory remarks, ridicule, & rudeness.  How sad for the person doing the personal criticizing & how truly hurtful & unfortunate for anyone being the intended target of the criticizer. It is a lose/lose situation for everybody & is something that does not have to be………………………………………

RECOGNIZED RIGHT AWAY WHAT THIS GROUP OF PEOPLE NEAR THE BEACH WERE DOING….’TAOIST TAI CHI’…I WAS ONCE A MEMBER;))