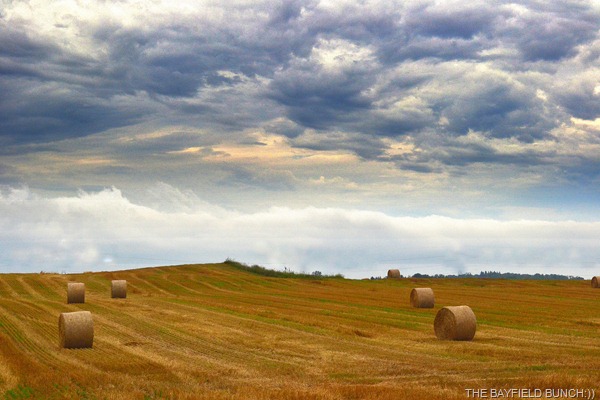 OUR STORMY MORNING BEGAN TO CLEAR UP BY NOON
A large fast moving rain storm coming in off Lake Huron spotted Kelly, Pheebs, & I rolling out our driveway this morning about 8:10 a.m. It proceeded to chase us all the way to Stratford. Sometimes we were ahead of the storm & sometimes the storm was ahead of us. We were at the hospital in just under an hour & I dropped Kelly off at the front door. We had both agreed there was no point in me sitting in a waiting room for the next 6 or 7 hours. This was not a major procedure & the majority of Kelly's time there would be spent behind closed doors waiting & resting. The liver biopsy procedure itself wouldn't take long but blood work, etc had to be done beforehand & there was a 4 hour resting period after the procedure to monitor things. 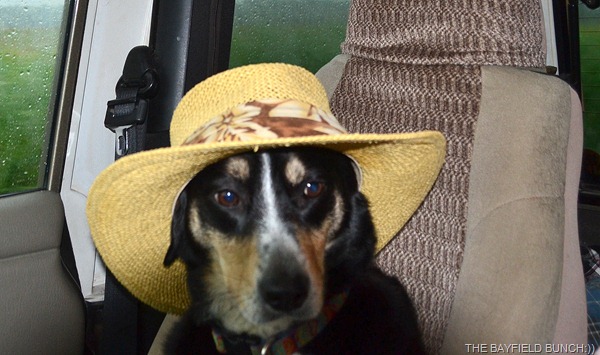 WAS THAT THUNDER I JUST HEARD!!
I had originally planned to drop Kelly off & then head over to the Wildwood Conservation Area near St. Marys. Miles of forest trails around a lake there & a favorite area of mine back in the mid 80's. Figured it would be good for Pheebs & I to get out for a good long hike & I was looking forward to seeing some of my old favorite hiking & photo spots. Had planned to spend the majority of my day there. However, I was thwarted on two fronts. First was the weather. Rain, rain, rain. Second was my sore left foot. Even if the weather had co-operated I could have not walked far anyway. After leaving the hospital Pheebs & I just slide through a nearby McDonald's Drive-Thru & headed west for home.  And then the storm intensified. 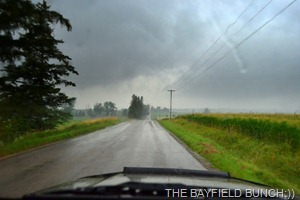 I’M GETTIN SCARED NOW DAD!!
At one point the wipers were barely keeping the windshield clear. A few lightning flashes, a few rolls of cracking thunder & the deluge of water from the sky was suddenly over. Skies lightened, rain let up & before long we were driving under patches of blue sky. That was all Pheebs & I needed to detour off down a muddy country road to the BANNOCKBURN CONSERVATION area about 8 miles east of Bayfield. I knew Pheebs would really be happy to get out for a big run & I also knew I would be alright for walking there because of the wooden flat surface boardwalk crossing the swampy area. Walked slow, took my time & made sure I was not overdoing my foot. Pheebs had a great time & I managed to get a few photos for tonight's post. We were back home about 11:20. 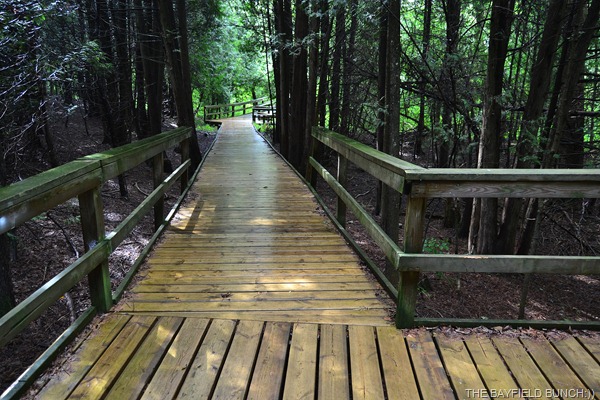 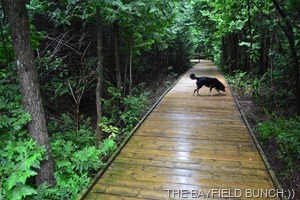 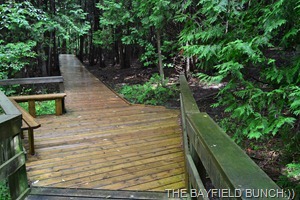 NICE STROLL ON THE BANNOCKBURN BOARDWALK 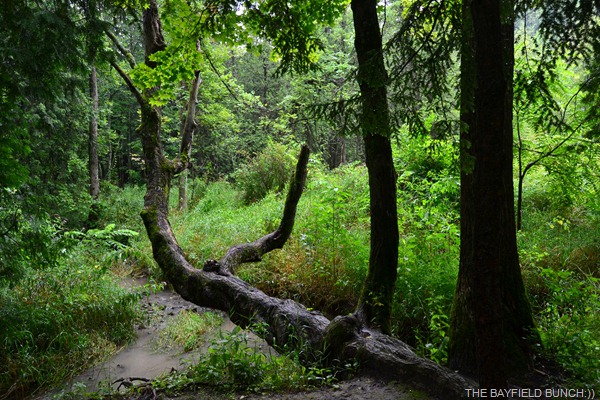 Phone rang about 1 o'clock & it was the Stratford Hospital calling. Lady at the other end said Kelly would be ready for pick-up about 4 p.m. It's a 50 minute drive to the hospital but Pheebs & I left home with lots of time to spare anyway. Day had turned out beautifully sunny so figured we would just take our time & enjoy the back road scenery all the way to Stratford. And that's what we did:)) 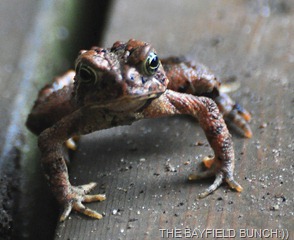 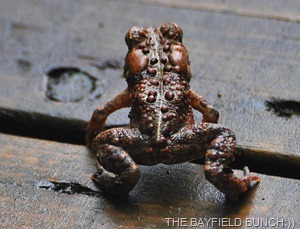 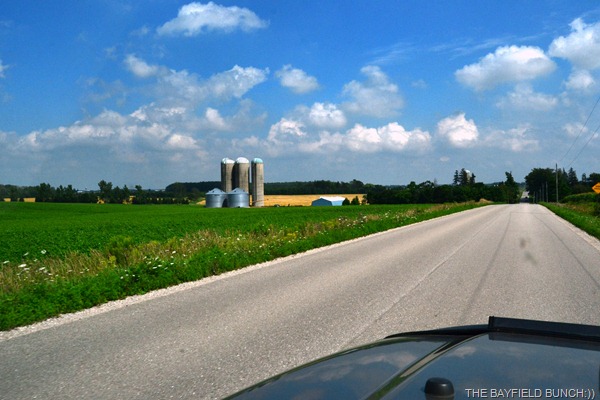 AFTER A RAIN SOAKED START TO THE DAY I WAS SURPRISED AT HOW NICE THE AFTERNOON TURNED OUT TO BE AS PHEEBS & I HEADED BACK TO STRATFORD
Right on time a nurse wheeled Kelly out the front door of the hospital. She was a little shaky but otherwise in her usual good spirits. Turns out there was more to the procedure than what she had thought. Five liver samples were taken. I'll spare you the details but she did have to spend nearly 5 hours in the recovery room. The procedure's entrance point is very swollen & has to be watched closely.  At the time of publishing tonight the swelling still has not gone down & Kelly is finding the area a bit painful.  At one point in the recovery room today she had to be taken to another room to have that swelling checked in case of internal bleeding.  It was determined that was not the cause.  Hopefully she is going to be feeling better in the morning & that swelling will have gone down. 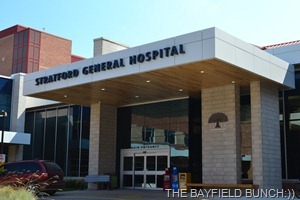 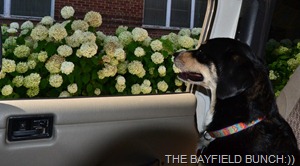 PHEEBS WATCHES FOR KELLY TO COME OUT OF THE HOSPITAL DOOR 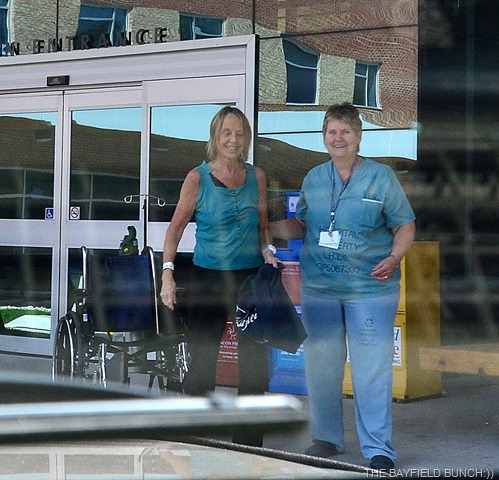 AND HERE SHE COMES NOW BEING HELPED BY A SMILING & FRIENDLY NURSE
Now here's a fellow RV Blogger with an exciting retirement going on. I envy TOM'S energy & keen interest level. Like the fact he's not letting his age or any age related problems stand in his way. I like Tom's attitude, his motives, & his way of getting out there & doing things:)) 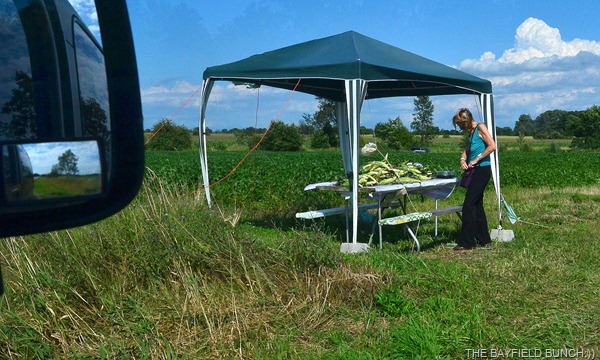 LAST STOP ON THE WAY HOME TODAY WAS TO PICK UP SOME FRESH CORN ON THE COB
LIBBY NESTER just joined us as our latest Blog Follower. Thanks for dropping by Libby & a big welcome to you from the Bayfield Bunch. Not sure when we'll get ourselves on the road this Fall but we're working on it:)) 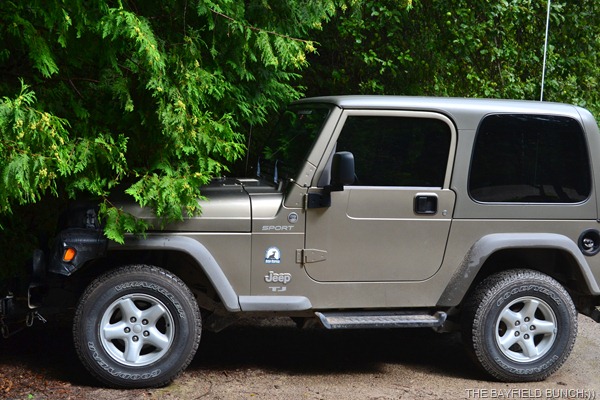 SOMETIMES WE JUST DRIVES AS FAR AS WE CAN GO & THEN WE HAS TO STOP
GROANER'S CORNER:(( The co-ed came running in tears to her father. "Dad, you gave me some terrible financial advice!" she cried. "I did? What did I tell you?" said the dad." You told me to put my money in that big bank, and now that big bank is in trouble." "What are you talking about? That's one of the largest banks in the world," he said. "Surely there must be some mistake." "I don't think so," she sniffed. "They just returned one of my checks with a note saying, 'Insufficient Funds.’
-------------------------------------------------------------
- Tourists see the world, travelers experience it.
- Home is where your pet is:))
- "If having a soul means being able to feel
love and loyalty and gratitude, then animals
are better off than a lot of humans."
(James Herriot)
- The pessimist complains about the wind; the optimist expects it to change; the realist adjusts the sails -William Arthur Ward
- The only thing better than right now will someday be the memories of right now...AL.
- It is not so much having nothing to do as it is not having the interest to do something....AL.
Posted by Al Bossence at 8/07/2013