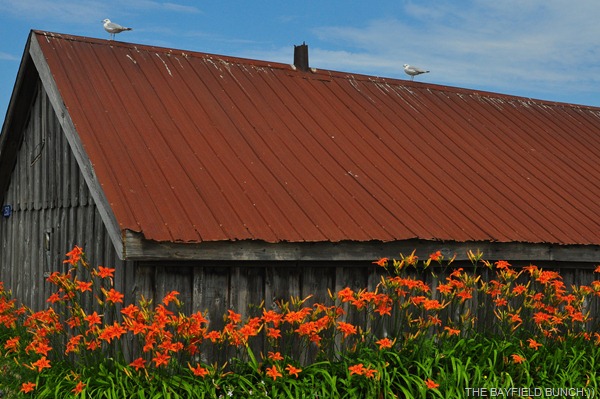 Pheebs & I were needing a Jeep fix this morning so we loaded ourselves up & headed for Goderich. I was kinda interested in seeing how much progress they had made on moving that old CPR train station down at the beach. Short stop for a Pheeber walk & we were off to Mr. Submarine.  One 6" Tuna sub to go & back down to the north end of the harbor to eat our dead fish sandwich by the water. The heat & humidity just kept building so we didn’t hang around long & headed for home via the scenic country road route through Ben Miller. Good thing we did because I had to move the Winnie Wagon soon as we got home.  And that’s where we got stumped……… 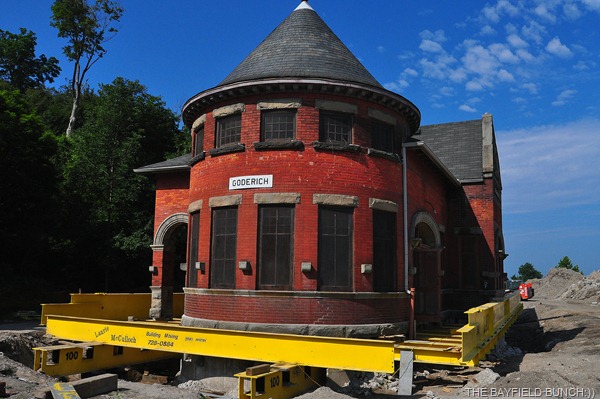 STEEL BEAMS ARE ALL IN PLACE UNDER THIS HEAVY WOOD, BRICK, & STONE STRUCTURE 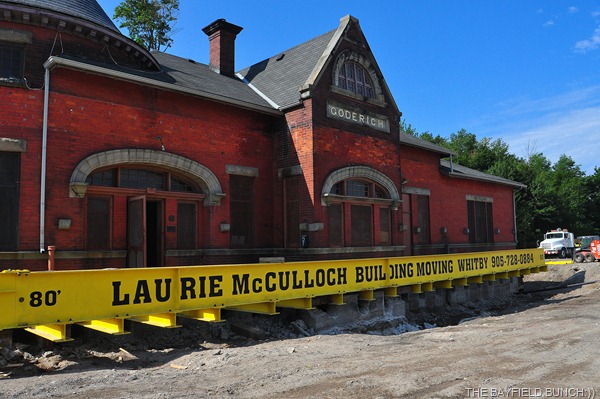 After her medical tests Tuesday morning Kelly had a long day at Deer Park Lodge & was back again this morning for a few hours. Hard enough as it is without not feeling a hundred per cent to boot. And then there are these energy sapping humid days that are upon us at the moment. I don't know how she does it sometimes but her condition has continued to improve from a month ago at this time. August 1rst is her next appointment with the Stratford Specialist. 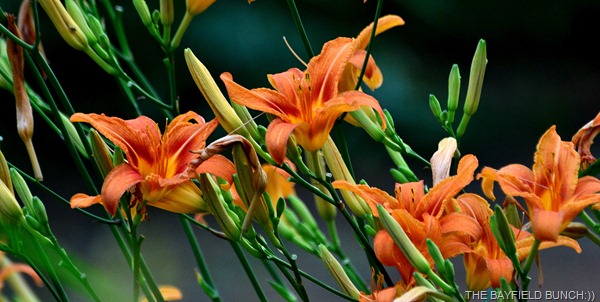 So hot & humid today I ended up in the shower twice.  No doubt in this guy's mind about Global warming's affects on the world's climate. Anyone in any kind of awareness state has to be totally conscious of what is happening around us. And in the grand scheme of things it is happening quickly. The fires, the floods, the devastating hurricanes & tornados. In my mind it has everything to do with the reality of the way we human beings here on this Planet are conducting ourselves. We are a world on a collision course with ourselves. 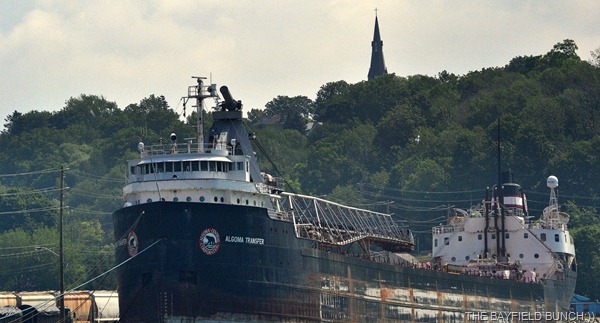 GODERICH SALT MINE IN THE BACKGROUND

Well so much for that El-cheapo Walmart watch I was blowin about a few weeks back. Oh the watch itself is still working OK but the chincy crappy strappy broke & the watch fell off my wrist to the ground. Did I save the Walmart receipt in case I had to take the watch back? Hey, I'm not that smart:)) 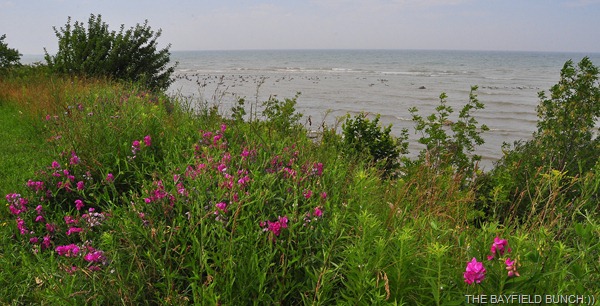 DOGGY WALKING AREA NEAR THE BEACH

Not surprised the new Lone Ranger & Tonto movie crashed & burned at the box office this past week. After seeing the previews for it at the Superman movie awhile back it seemed rather obvious to me it was pretty bad. And, apparently the critics & public agreed.

KIND OF A LAZY DUCKY DAY ALONG THE WATER’S EDGE

New Blog Follower this morning & someone also new to the world of blogging & Bloggers. A big welcome from the Bayfield Bunch to Margie Lambert hailing from the TRAVELING BOOMERS. Thanks for stopping by:)) 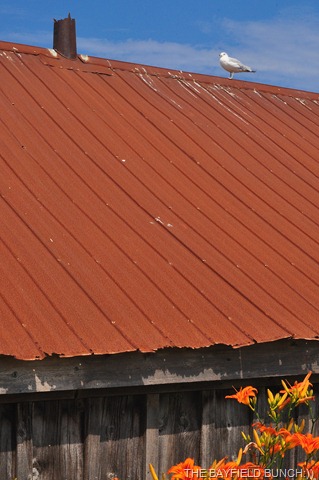 Reading GYPSY'S post Tuesday morning I was reminded of something I see all the time that bothers me about many people's widespread laziness & inconsideration. Happens in every large parking lot across North America. Shoppers returning to their cars with a cartload of merchandise, loading things in their vehicles, & then abandoning their carts. Too lazy & too inconsiderate to walk that empty cart to a nearby cart station. I'm sure we all have had to stop & move abandoned carts out of the way.  To me it is just another indicator pointing directly to some of our society's ills & attitudes. I, like many others, am a cart returner & sometimes take the time to straighten up abandoned carts around the cart station & line them up in a neat fashion as well. Back in the early to mid 60's I worked in a Kitchener Supermarket for a short time. It was here I developed a working knowledge & habit of keeping things neat & organized on shelves as well as the stores parking lot. 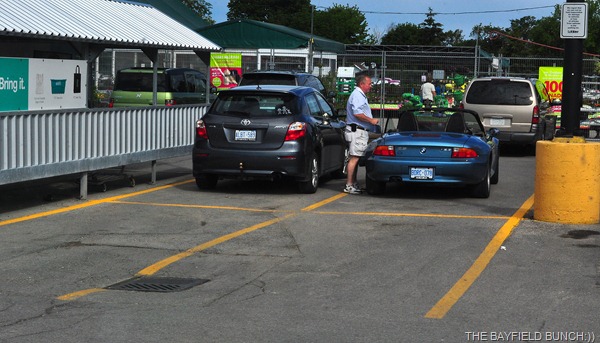 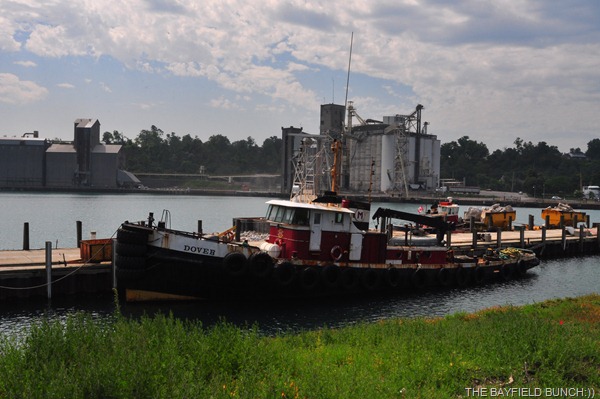 WORKING ON A NEW BREAKWATER IN THE HARBOR

And while on the topic of large parking lots here's another one of life's little mysteries for me. I've never figured out why when pulling into open parking places drivers don't move forward into the open space ahead of them making it much easier to later 'drive straight out' of that space instead of having to back out of that spot. I see it all the time. People will pull into that first spot & stop even though the space directly in front of them is open. I watch them later come out, get into their vehicles, then struggle & strain their necks trying to back out of their spot hoping to not back into or over anyone who just might happen to be returning their shopping cart of course.  And trying to back up without scraping all the paint & chrome off the car beside them as their front ends swinging around. Just another one of those little people mysteries for me. 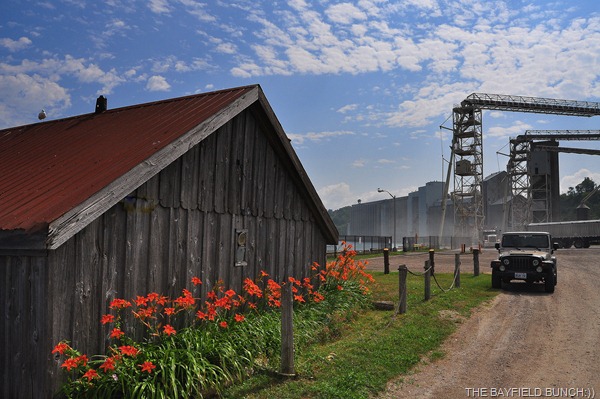 Ok, ok, & why do people abandon their shopping carts right in the middle of the aisles all the time while they inattentively & leisurely browse the shelves around them. Treat your shopping cart like you do your vehicle on the road. Would you leave your car in the middle of the street while you walk over to chat it up with a neighbor? Same thing in the Supermarket aisle. Pull over & park your cart out of the way. Be aware of the traffic around you please. Oh, & can you return your cart to the cart station when your done & not scrape the side of my Jeep off when you reverse out of your parking space please................ 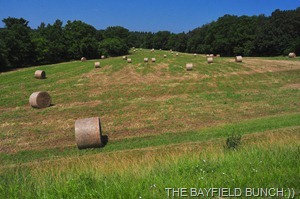 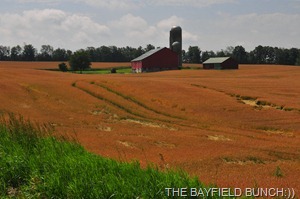 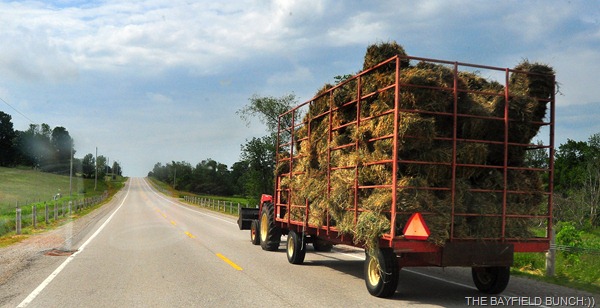 Note on our mailroom chalkboard a couple weeks ago said anyone needing tree stumps removed on their property phone this #. We did & today the stump guy came with his stump removal machine & that' why I had to move Winnie the Bago when Pheebs & I returned from Goderich this morning. Fifteen minutes after Stumpy’s Tree Service arrived the stumps were gone & it had only taken me 7 years to decide on getting the job done. Had a couple Pine trees cut down back in 06 to make a parking spot for our RV. The Pine stumps were left in the ground & I have been tripping, stumbling, & falling, over those 2 darn stumps ever since. They were both right alongside the driver's side of our RV. Always in the way while opening bins & with the Class C Winnie Wagon it seemed my driver's door always opened right where the stump was. Nice to have them finally gone............................. 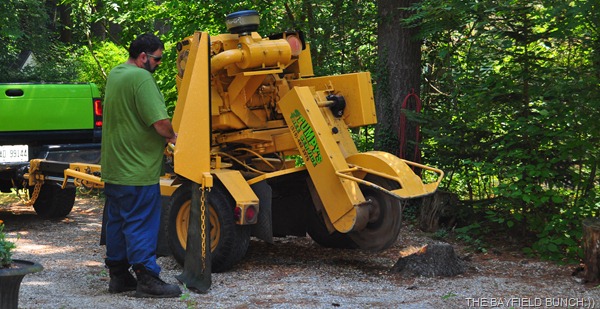 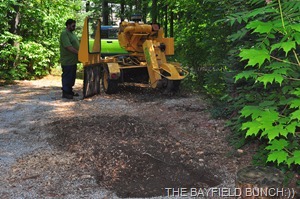 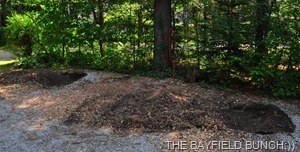 Liked this video I pulled off an Astronomy site on our side bar this morning. Called Full Moon Silhouettes it is very well done.  No easy feat for the photographer getting things just right but he does it.  A relaxing moon rise & watch carefully for the tiny silhouetted people on the horizon line. 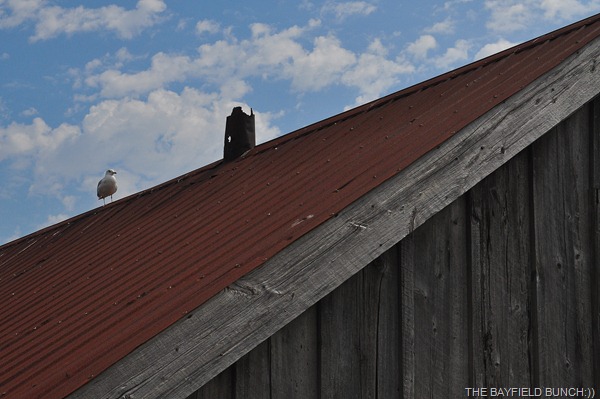 GROANER'S CORNER:((  From A Mother With Love

Dear Child, I am writing this slow because I know that you can't read fast.
We don't live where we did when you left home.  Your dad read in the paper that most accidents happen within 20 miles from your home so we moved.  I won't be able to send you the address, as the last family that lived here took the house numbers when they left so that they wouldn't have to change their address.
This place is real nice. It even has a washing machine. I'm not sure if it works too well though.  Last week I put a load of socks & underwear in, pulled the chain, and haven't seen them since.
The weather isn't too bad here., it only rained twice last week, The first time it rained for three days and the second time for four days. The coat you wanted me to send you, your Uncle Steve said it would be a little too heavy to send in the mail with the buttons on, so we cut them off and put them in the pockets. We got another bill from the funeral home.
They said if we don't make the last payment on Grandma's grave, up she comes. John locked his keys in the car yesterday. We were worried because it took him two hours to get me and Shelby out.
Your sister had a baby this morning but I haven't found out what it is yet, so I don't know if you're an aunt or an uncle. If the baby is a girl, your sister is going to name it after me, she's going to call it Mom.
Uncle Pete fell in a whiskey vat last week. Some men tried to pull him out but he fought them off and drowned. We had him cremated and he burned for three days.
Three of your friends went off a bridge in a pick-up truck. Ralph was driving. He rolled down the window and swam to safety. Your two friends were in the back. They drowned because they couldn't get the tailgate down.
There isn't much more news at this time. Nothing much has happened.
PS, I was going to send you some money but the envelope was already sealed.