SURPRISED THIS WHITETAIL DEER IN THE HULLET MARSH THIS MORNING

It was ‘travel talk’ that pulled me up by the boot straps this morning.   More about that later………………..

Kelly had to fill in for a few hours at Deer Park Lodge today so headed out the door around 9:30 this morning.  Rascal Buns & I were feeling the need for speed (if you can call 20mph speed) so it was into the Jeep with us & off we went on another of our relaxing gravel runs.  We only have 3 directions to chose from once we leave Bayfield.  North, South, & East.  If we want to head west we can only go a mile & then we need a boat.  Brekky to go at Clinton’s Tim Horton’s & it was off to the HULLETT MARSH we headed.  Our mornings are delightfully cooler now & at 62F & I knew there would be no bugs in the air.  It was a picture perfect morning with big fluffy white clouds in the sky.  So happy to be rid of the heat & humidity. 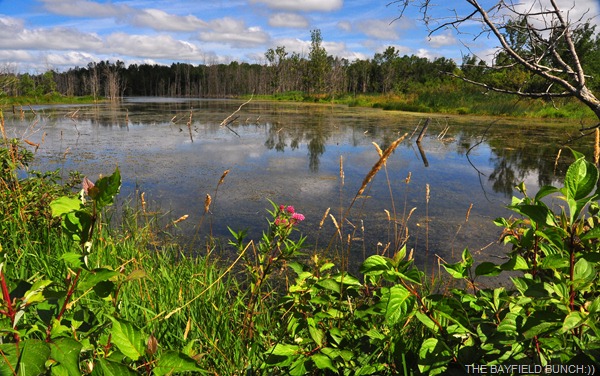 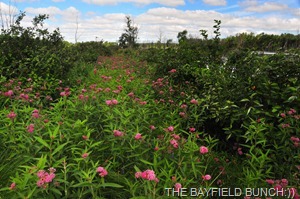 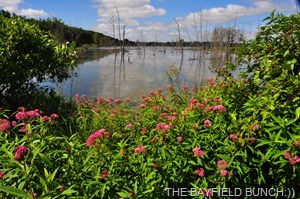 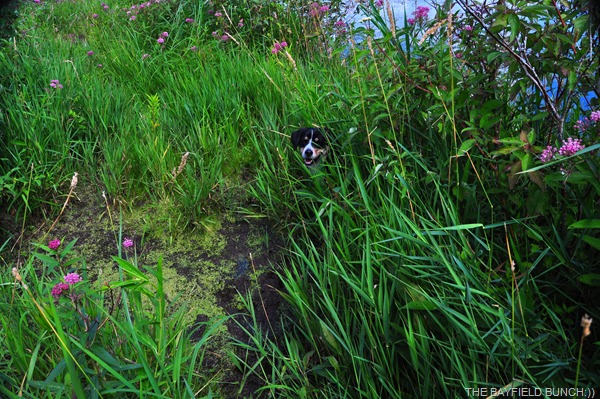 Parked our Jeep near a large pond & off we went.  How nice within minutes to come across a grazing white tailed Deer.  Watched her grazing for about 5 minutes before she caught wind of us & dashed off into the underbrush.  After being frumped out in my recliner for days how great it was to be out in nature again enjoying sunshine, summer breezes, & the many bird songs one can only hear in a marshy area.  Pheebs got herself into some swampy muck & I got a soaker.  In other words, we had ourselves a most enjoyable time:)) 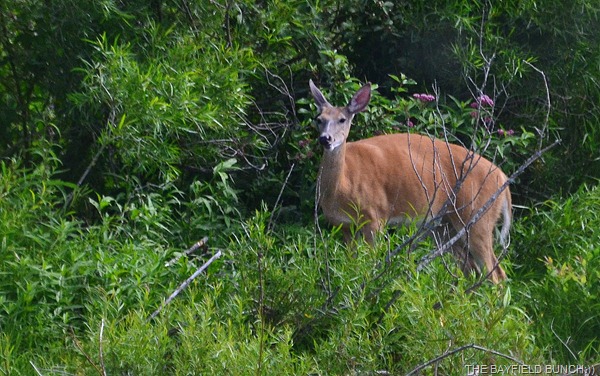 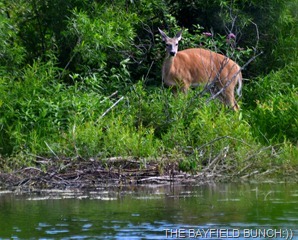 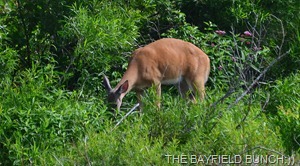 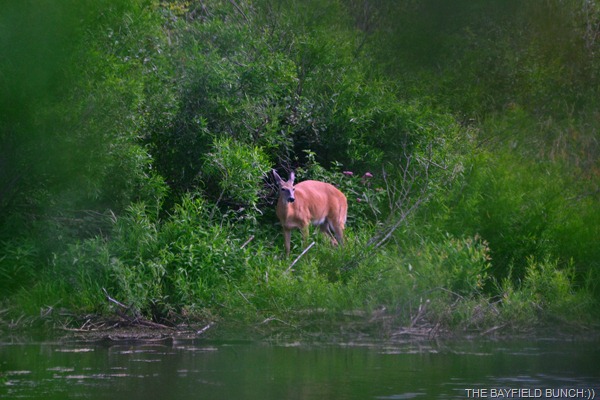 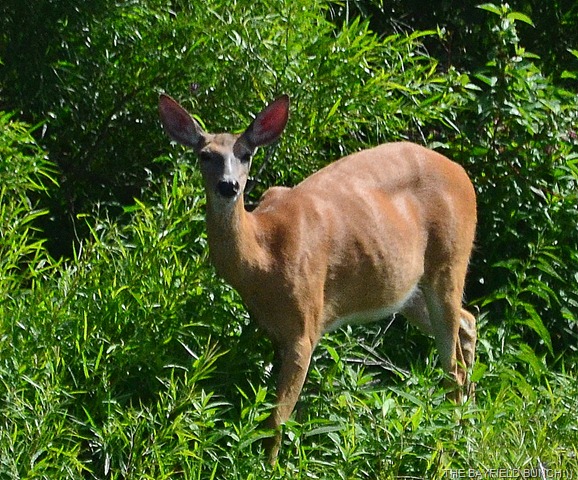 By the time we walked back to the Jeep Pheebs paws had been brushed clean by the long grass spent we had to trudge through.   Spent our next couple hours wandering along the country roads stopping here, snapping a few photos there, & grabbing a stretch or two whenever we needed one.  Don’t think we got over 65F today & I did have a flannel long sleeve shirt on.  But it wasn’t cold.  It was just totally perfect for being outside doing things.  Sun was warm, air was cool, & again it reminded me of a typical winter’s day in Arizona.  No bugs:)) 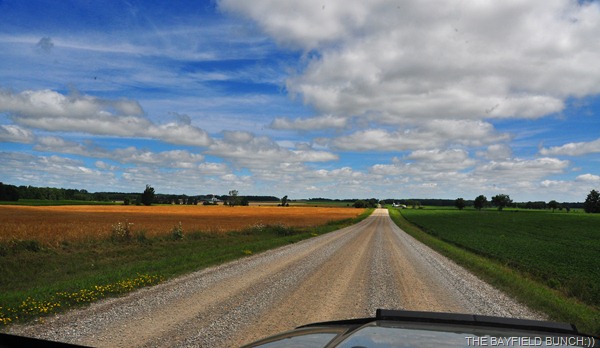 Started my slide copying project Monday night. So far so good....sort of. First carousel I started working on were slides of myself from when I was a child. I had copied some old black & white prints to slides years ago.  Was copying my 19th slide when I realized I had just done the first 18 wrong. Slide 19 was a photo of me in Miami Beach back in 1966. I had on a white T-shirt with the word 'Navy' written across the front. (I was in the Canadian Navy at the time) Noticed right away there was a problem with the photo. The word 'Navy' was backwards. That told me right off that I had copied the first 18 slides backwards. Luckily, this copier is very easy to use & no problem to re-do the slides. 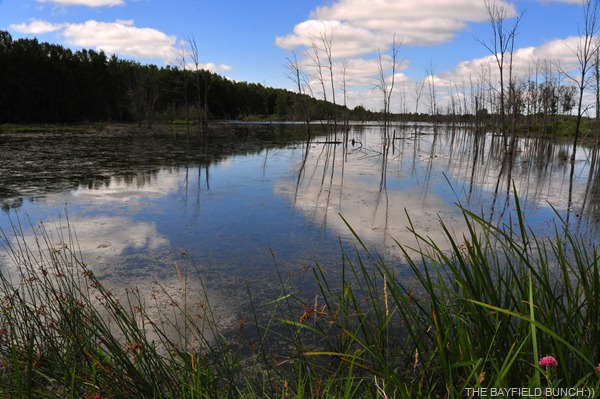 Before starting the project I had to do a little housecleaning in my Windows 7 'Picture' program. Tied up a bunch of loose ends, created some new folders & re-organized a bunch of miscellaneous photos readying things for my slide update photos. 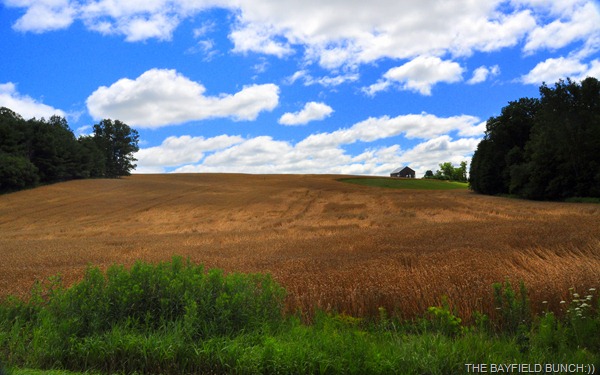 The slide copier handles 4 slides at a time & once one gets on to the procedure things go pretty quickly. I pull 4 slides out of the carousel tray & place them in the slide carrier which I insert in the copier. Takes me about 4 seconds to copy each slide. The copiers software can rotate the photo, mirror image it, plus it has a bunch of editing tools like exposure control, color shifts, etc. I bypass these because I will do all that later when I edit each photo in my familiar Picasa 3.9 photo editing program. 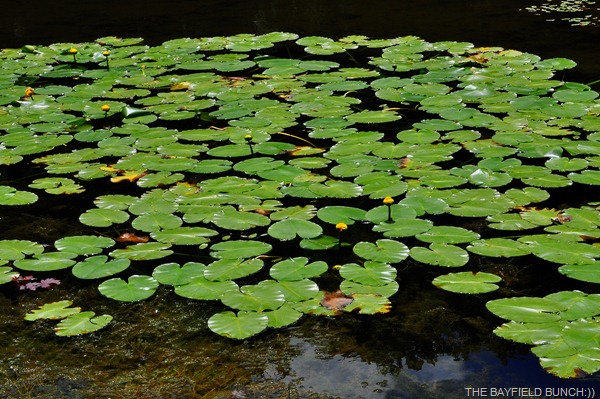 Each old photo I bring up on the screen has a host of memories attached to it.  For me, each photo tells a story.  Even after 30 years, 4 photos right away brought tears to my eyes.  They are of me & my dog Biff year’s ago.  I will include one those photos here as a tribute to my old faithful & long lost Pal.  If there is such a place as heaven I will be looking for Biff if & when I get there. 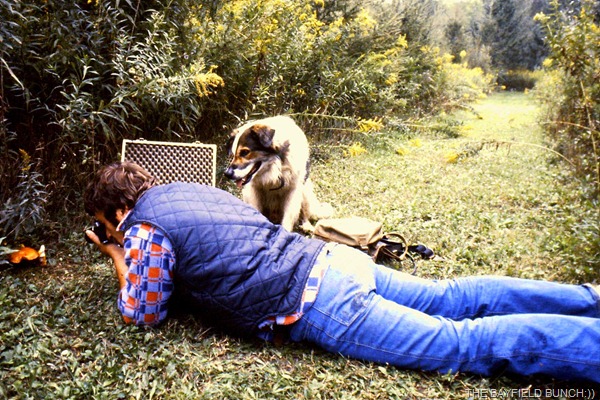 I think it was a combination of our hot & sticky weather, being housebound for a bunch of days, & just those old familiar mid summer blues that combined to slide me into the doldrums these past bunch of days.  Happens to me periodically when I get a little too hard on myself & end up slumped in my recliner.  I enjoy writing this post every day but the last few days it was difficult to get myself interested in anything & that included the blog.  So what lifted my Spirits this morning?  Travel talk, that’s what:))  We had talked a bit about it on & off the last few weeks but this morning I felt there was finally some seriousness in our discussion.  I’m the kind of person who likes to get a ‘definite departure date’ nailed down each Fall.  Gives me a goal to work towards, a challenge, something to look forward to, & a purpose.  If I don’t have those 4 things in front of me at all times I can easily backslide into the doldrums……….. 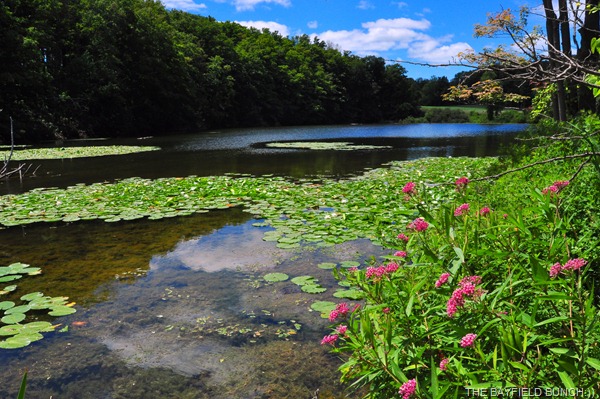 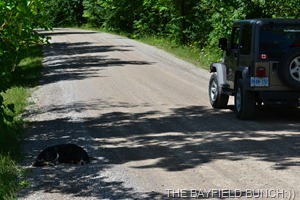 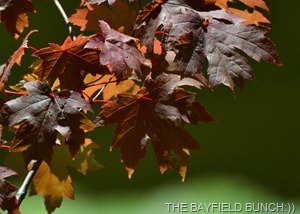 It seems our ‘travel talk’ was all I needed to begin re-charging my depleted mental & physical batteries.  For me, travel plans always spark my enthusiasm instantly & especially when they regard heading south.  Didn’t take me long to get myself outside, open up some of the rig’s bin doors & start thinking about what will go where, when, & how because we could be going sooner than we think.  We are considering 2, maybe 3 Winnie Wagon trips.  Up to Ontario’s Bruce Peninsula in a couple weeks for a 3 or 4 day shake down cruise.  That’s why I loaded a few things this morning.  Then over to Rochester NY in early September for maybe 3 days to visit Kelly’s Mother & maybe back home again.  Where we go from Spencerport NY will depend on which of 2 routes we decide to take.  Been some talk about heading across Canada to B.C. & then down the coast through Washington & Oregon.  If we chose that route then we would come back to Bayfield from Spencerport before heading out for the west about mid September.  Second route on the table is the Colorado route I’ve been wanting to take the past few years.  If we chose that route we would just leave Spencerport & head west to Colorado from there.  I would say odds right now are in favor of the Colorado route.  Of course this all depends on some health issues at the moment but we are remaining optimistic.  With this summer’s health issues fresh in both our minds we both agreed it is better to pull out all the stops NOW & get as many enjoyable travel miles & adventures under our belts as we can…….while we can!! 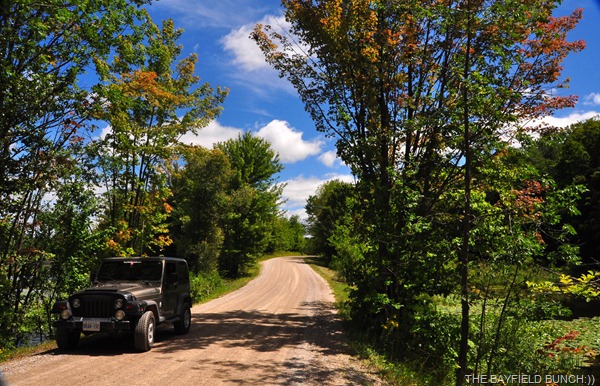 GROANER’S CORNER:(( All depends on how you look at it………………………. Two shoe salespeople were sent to Africa to open up new markets. Three days after arriving, one salesperson called the office and said, 'I'm returning on the next flight. Can't sell shoes here. Everybody goes barefoot.'
At the same time the other salesperson sent an email to the factory, telling 'The prospects are unlimited. Nobody wears shoes here!'