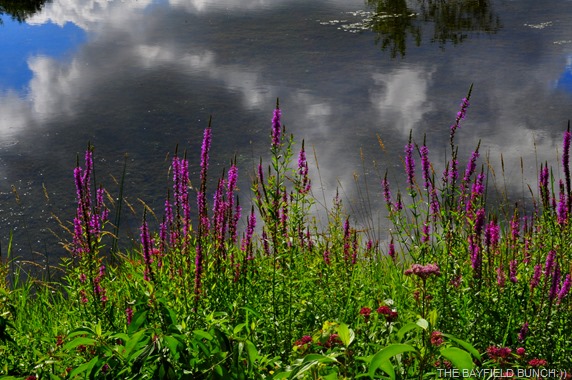 Ran into a computer problem with our Lenovo desktop today. Live writer wouldn’t open tonight so this post is coming from my Toshiba laptop. 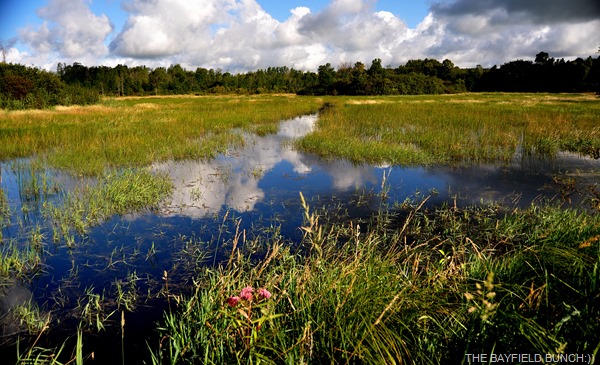 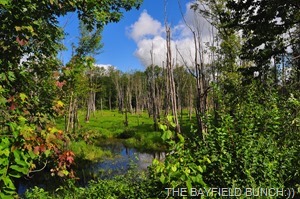 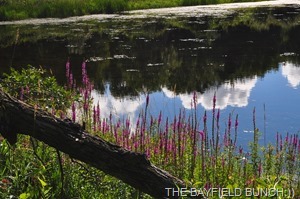 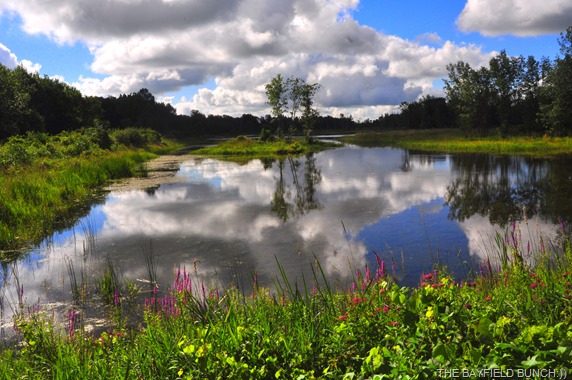 GREENWING POOL AT THE HULLETT-MARSH THIS MORNING

With sunrise tickling the tops of our pine trees first thing this morning I knew Pheebs & I were going to get ourselves out for a Jeep ride.  The last few days had turned out to be long & gray so knew we needed to get ourselves out & shake off those rainy day blues.  Also wanted to take advantage of this great stretch of cooler weather we are having at the moment.  56F when we got up this morning & that works for me:)) 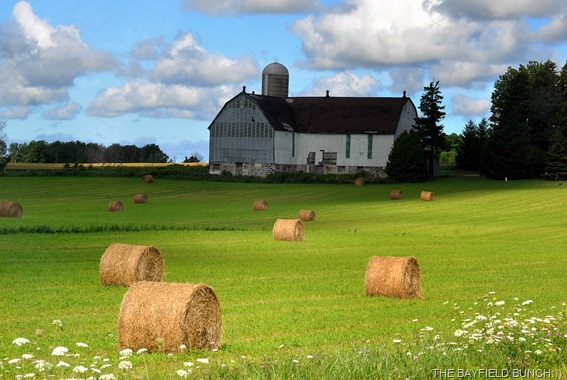 Me & Little Miss Smarty Pants were out the door & on the road before 9 a.m.  It was a picture perfect morning again with big fluffy white & gray clouds overhead.  Nice to see sun splashes traveling across acres of green & golden farm fields.  Our usual trip through Tim Hortons drive-thru netted us a shareable breakfast.  From Clinton it was a short scurry over to the HULLETT-MARSH for a swamp scramble.  The Hullet-Marsh is very large & there are many entry points.  Had been about 25 years since I had walked in around the the Greenwing Pool so that is the area Pheebs & I headed for.  Despite our beautiful morning we had to cut our walk down to about half an hour because of an armada of biting Deer Flies, swarms of Gnats, & flocks of Mosquitoes.  Don't know why I can't seem to remember to put a can of bug spray in the Jeep. 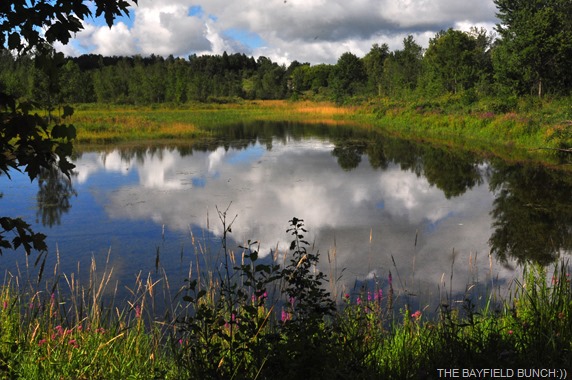 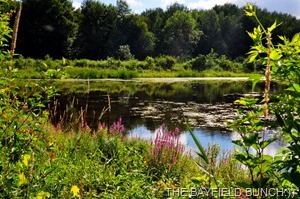 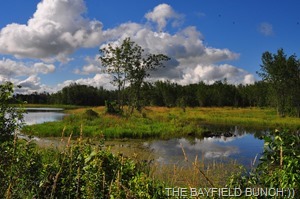 From the Hullett-Marsh we travelled a maze of country back roads which eventually returned us to Goderich.  Had some things to pick up at Walmart plus I had heard they were planning on moving that big old stone & brick train station today.  We slipped down around the harbor area & I could see the train station was still in place but it did have a bunch of wheels under it.  Heard they plan to pull it with a big truck but whether it will be today or not I don't know.  Big lake freighter out on the lake & lots of people on the beaches.  Another large lake freighter taking on a load of rock salt at the salt mine & rows & rows of big grain hauling trucks at the lakeside grain elevators.  A busy harbor today. 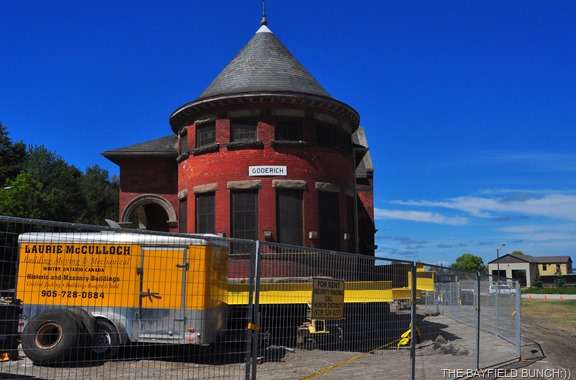 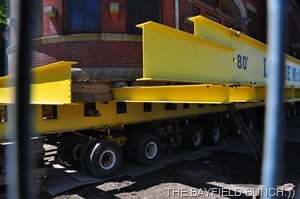 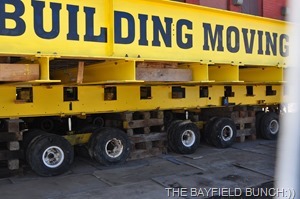 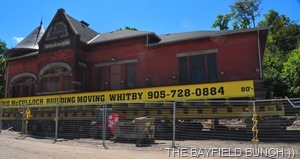 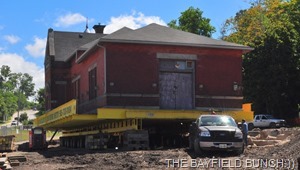 This digitalizing of slides project I am working on has had a bit of an unexpected sad side to it.  Decided a few days ago to begin the project by doing all my 'people slides' first.  This involved family members, friends, & self.  It has been many years since I have looked at these pictures & as each slide comes up on the screen I am reminded of times, places, & events of days gone by.  'The way we were' so to speak.  Some of those are happy memories & some are not so happy.  Many are just downright sad.  Most of the people in my slides are gone now just as each slide's moment in time was gone from my memory until I put each slide up on the computer screen again.  It's interesting how the day to day brain has no recollection of these long ago pictures and yet within a millisecond of them appearing on the screen the brain instantly not only recognizes each picture but accesses all the factual information about that picture.  Time, dates, locations, & circumstances.  Also, in a flash the brain triggers it's emotional side as well & with each picture comes it's own set of feelings.  It's all there in the pictures.  It's all there in the history of our short lives.  In one glance, one photo instantly transports us back in time to another dimension of our being.  To another era of our lives & one can easily be overwhelmed by all those feelings………………. 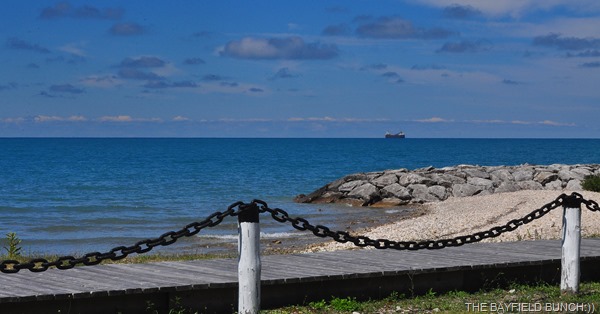 Phone rang early this afternoon & I heard Kelly in the sunroom say, "is your television working"?  My first thought was it's Uncle Harry calling about a problem he is having with his TV remote.  It was not unusual for Harry to call when he was having TV problems because he did not want to be without his favorite music channel.  Took me a few seconds to remember Uncle Harry is gone.  A year ago we were in the habit of going to see him every week.  Little did we know when we headed for the South-West last October our visit with Uncle Harry would be the last time.  I still occasionally absent mindedly think what day we are going down to see him.  As Kelly said in her Eulogy this past April, "wherever you are Harry, I hope they have the music turned on for you". 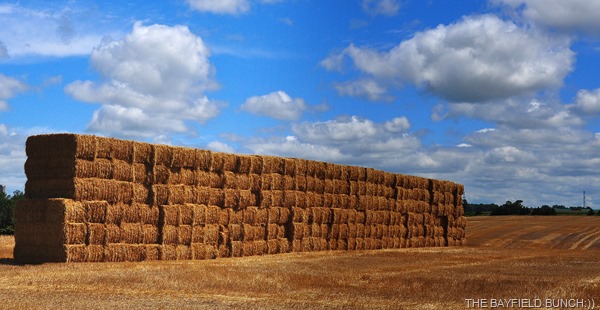 Kelly spent a good part of her day working on some kind of new computer glitch.  Had a feeling it might have something to do with Internet Explorer 9 but when we tried to open some recent un-openable files using Google's Chrome & Firefox they still would not open.  Could not get our Microsoft Security Essentials to open either nor our CCleaner & a bunch of other programs.   System Restore didn’t work either.  Imagine my disappointment tonight when my Live Writer wouldn’t even work.  Although Kelly does not have a computer background she has done really well at sleuthing out problems & fixing them.  She has an uncanny ability to think a problem through & stay with it until she has it figured out.  She plans to tackle the computer problem again tomorrow……………………..

Thanks for that Tim Horton gift card Monica.  Pheebs & I will make good use of that for sure………………:)) 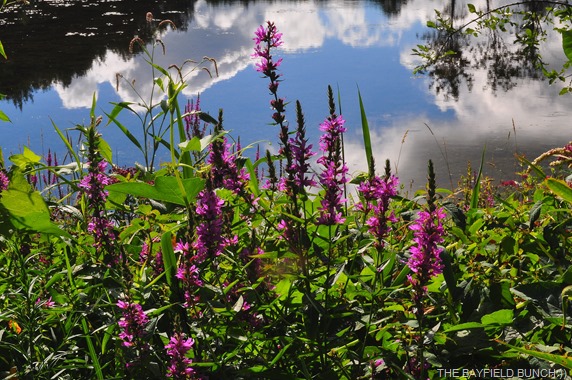 GROANER'S CORNER:((  Long ago, when sailing ships ruled the waves, a captain and his crew were in danger of being boarded by a pirate ship. As the crew became frantic, the captain bellowed to his First Mate, "Bring me my red shirt!". The First Mate quickly retrieved the captain's red shirt, which the captain put on and lead the crew to battle the pirate boarding party. Although some casualties occurred among the crew, the pirates were repelled.  Later that day, the lookout screamed that there were two pirate vessels sending boarding parties. The crew cowered in fear, but the captain calm as ever bellowed, "Bring me my red shirt!". The battle was on, and once again the Captain and his crew repelled both boarding parties, although this time more casualties occurred.  Weary from the battles, the men sat around on deck that night recounting the day's occurrences when an ensign looked to the Captain and asked, "Sir, why did you call for your red shirt before the battle?" The Captain, giving the ensign a look of experience and wisdom, explained, "If I am wounded in battle, the red shirt does not show the wound and thus, you men will continue to fight unafraid." The men sat in silence marveling at the courage of such a man. As dawn came the next morning, the lookout screamed that there were pirate ships, this time ten of them, all fiercely armed and approaching at great speed. The men became silent and looked to their Captain for direction.  The Captain, calm as ever, bellowed, "Bring me my brown pants!"
-------------------------------------------------------------
- Tourists see the world, travelers experience it.
- Home is where your pet is:))
- "If having a soul means being able to feel
love and loyalty and gratitude, then animals
are better off than a lot of humans."
(James Herriot)
- The pessimist complains about the wind; the optimist expects it to change; the realist adjusts the sails -William Arthur Ward
- The only thing better than right now will someday be the memories of right now...AL.
- It is not so much having nothing to do as it is not having the interest to do something....AL.