A BREEZE KEPT US FROM EVAPORATING OFF THE PLANET TODAY 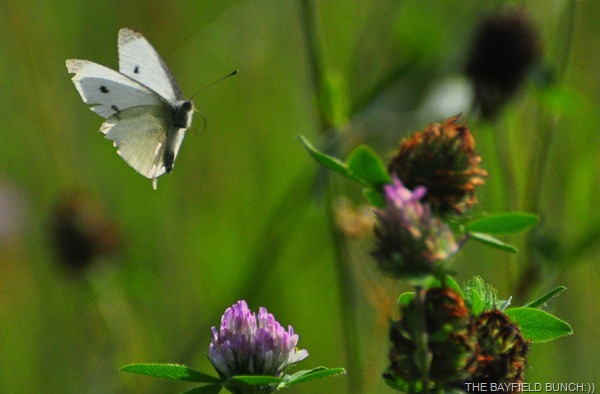 AN IN-FLIGHT CABBAGE WHITE BUTTERFLY
I think it was this morning’s slight breeze which probably kept us from simply evaporating right off the Planet.  Of course moving air coming in off the lake was unable to penetrate along our heavy forested trail so another walk was cut short by flying insects & excessive heat driven humidity. 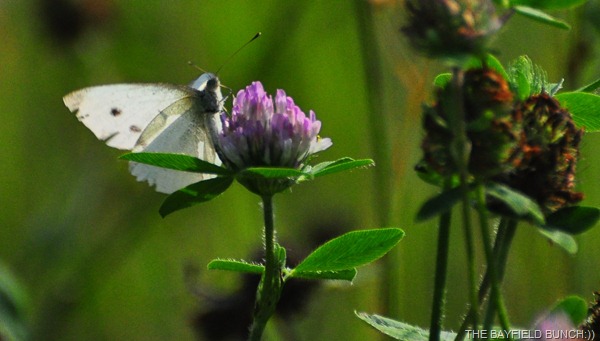 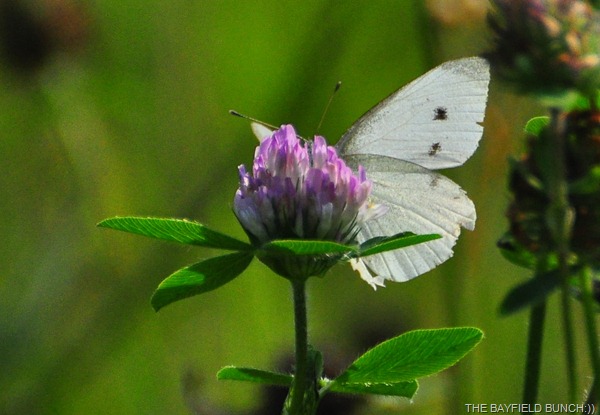 PEEK-A-BOO CAN’T SEE YOU
Fired up the Motorcycle & took myself for a short cooling off ride around a big country block.  Fine when one is moving but with pavement, moist air, & a beating sun heating things up it can get a little warm when one has to stop for anything. 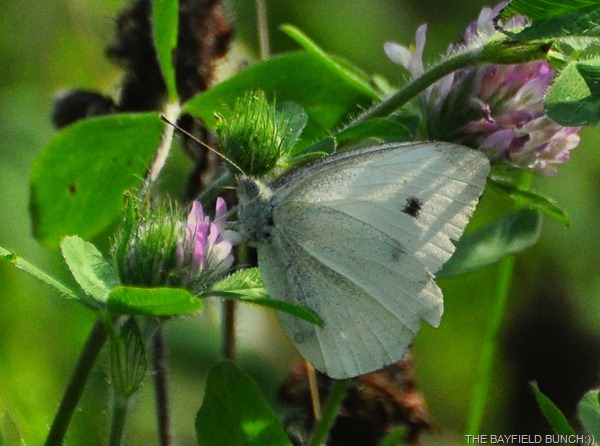 Kelly had some errands in Goderich so off she went in the Santa Fe.  She still continues to improve but is a little concerned about her weight loss.  Still no word on the Valley Fever test.  She see’s her Stratford Specialist again on August 1rst.  If her weight stabilizes & she does not relapse into the condition she was in about 6 weeks ago we should be good to go again this Fall. 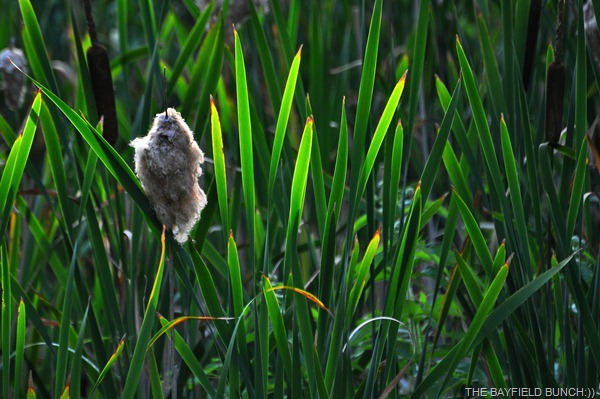 While at Henry’s Camera Store in London a few days ago I got myself talking to the camera fellow about dust & dirt on camera sensors again.  I knew it was expensive to get the sensors cleaned & I knew the detailed procedure I had read about on the internet was not for a bumble-fingers like me.  I had already made the sensor on my Nikon D40 much worse a couple times.  He said there was a sensor cleaning kit out now & was very simple to use.  Ya right, how many times have I heard that line before.   An experienced auto mechanic will tell ya it’s easy to pop an engine out of a car too.  He sensed my lack of mechanical confidence so picked the kit off the shelf & showed me how to use it.  Well, it started looking pretty darn simple to me too.  Famous last thoughts of course.  Oh well, probably couldn’t make my recently retired D40 worse than it already was.  Or, could I………………………………… 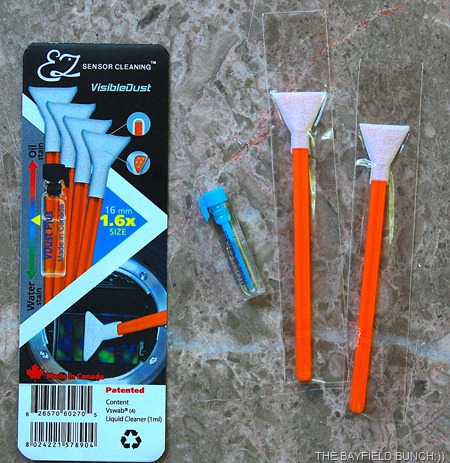 DSLR SENSOR CLEANING KIT
The VISIBLE DUST kit was $20 so I hesitatingly bought it & brought it home.  Took me awhile to work up some nerve but finally there I was, kit in hand with the camera lying on a table before me.  Figured I’d probably end up with the camera sensor laying on the floor somewhere.  Carefully removed the camera’s lens & proceeded to ‘lock the mirror up.’  Check your manual to see how this is done with your particular camera if it is a DSLR.  Caution: if you try this, make sure your camera battery is fully charged!!  The camera guy thoughtfully reminded me of that so I was OK.  With applicator in hand I carefully put a few drops of solution (blue cap container) on the Y tip of the applicator without even dropping the tiny bottle into the camera body or spilling the solution all over the place.  Camera guy said it is important to wait about 10 seconds before inserting the damp applicator into the camera to draw across the sensor.  ‘Do not want a smear’ on the sensor.  He said then rotate the camera, flip over the applicator, & repeat the gentle but firm single swipe across the sensor again.  Only use the applicator once & discard.  So, that’s what I did & to my surprise nothing broke, fell off, or became dislodged.  I then unlocked the mirror, (an amazing feat in itself for me) snapped a lens on & took a photo of the blank sky.  Did I expect this to work?  Of course not.  But……..did it work??  Below are the before cleaning & after cleaning photos.  You be the judge:)) 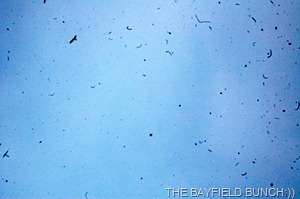 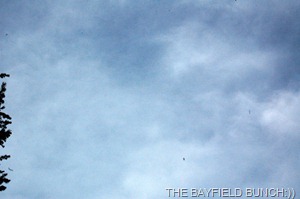 BEFORE CLEANING & AFTER CLEANING (UPDATE: THAT IS A PINE TREE BRANCH ON THE LEFT SIDE OF THE 'AFTER' PHOTO)
A fast moving thunderstorm roared in across the lake about 4:20 this afternoon & took us from sunny bright to darkening gray in a matter of seconds.  Triggered all our front yard night lights & of course as is always the case, knocked our power out just long enough for me to again have to re-set all the electronics.  Clocks, lights, etc.  An hour later the rain clouds cleared & we were back to sunny bright again.  However, the storm headed inland, intensified, & did a fair bit of damage to some cities & towns.  Tornado warnings were out & one funnel cloud was confirmed north of Toronto but never touched down. 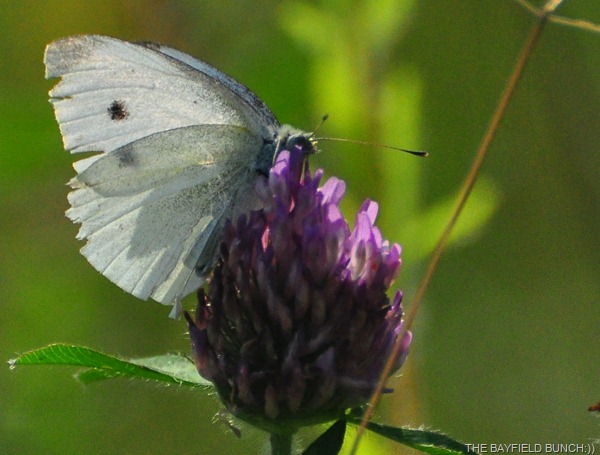 GROANER’S CORNER:((    A resident in a posh hotel breakfast room called over the head waiter one morning and read from the menu. "I'd like one under-cooked egg so that it's runny, and one over-cooked egg so that it's tough and hard to eat. I'd also like grilled bacon which is a bit on the cold side, burnt toast, butter straight from the freezer so that it's impossible to spread, and a pot of very weak, lukewarm coffee." "That's a complicated order sir," said the bewildered waiter. "It might be quite difficult." The guest replied sarcastically, "It can't be that difficult because that's exactly what you brought me yesterday!"
-------------------------------------------------------------
- Tourists see the world, travelers experience it.
- Home is where your pet is:))
- "If having a soul means being able to feel
love and loyalty and gratitude, then animals
are better off than a lot of humans."
(James Herriot)
- The pessimist complains about the wind; the optimist expects it to change; the realist adjusts the sails -William Arthur Ward
- The only thing better than right now will someday be the memories of right now...AL.
- It is not so much having nothing to do as it is not having the interest to do something....AL.
Posted by Al Bossence at 7/19/2013