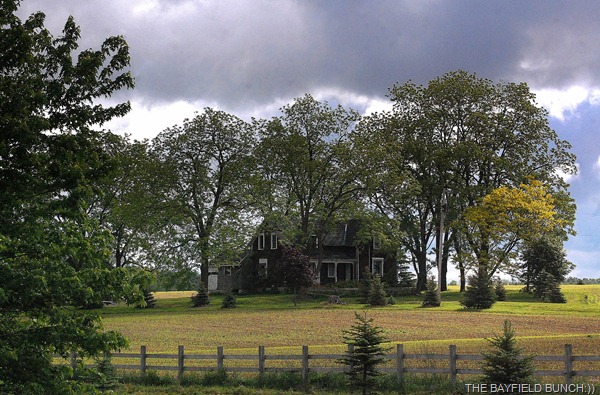 When I saw the first rays of sunrise this morning tickling the tops of our Pine trees my spirits were lifted knowing it would not be another gray day. We both made it around the morning trail but my hip was sore by the time we returned. Knew that left me 3 options & all of them involved sitting down. Spending any more time in my recliner in front of the mind numbing television was out. Sitting at the computer in the sunroom was not going to work either. My computer interests seem to be dwindling. Again, it was option 3 that appealed to me & by 8:20 this morning the little Belly Swamper & I were comfortably seated in the Jeep & headed out the driveway. Kelly was resting up before heading over to Deer Park for a few hours. 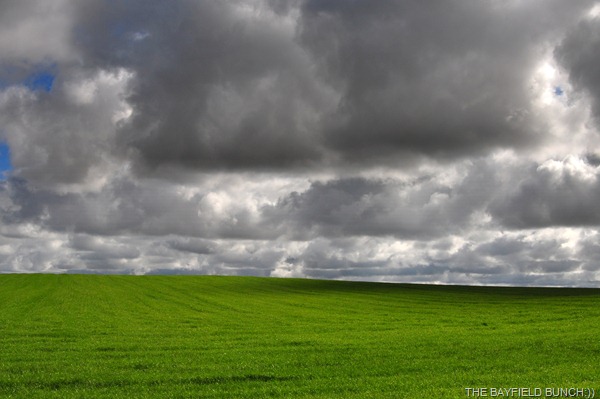 Seems our preference of 'eats' determines our direction of travel. Clinton's Tim Horton's felt appealing this morning so that headed us off in a South-Easterly direction. Beautiful morning for a country roads drive. Huge puffy white & gray clouds dominated overhead giving the sky an overpowering mood. Love seeing skies like that. It is the ever changing clouds that set the tone for any day's majesty. 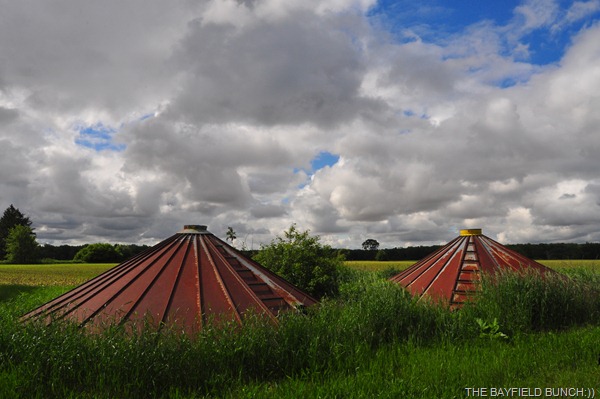 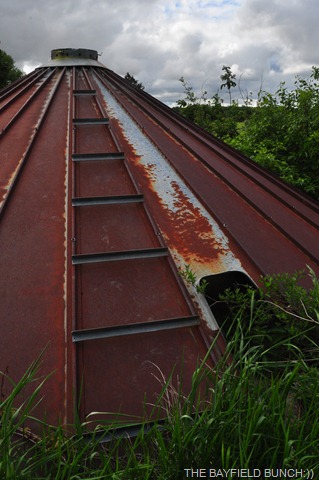 <<< TWO UFO’S LANDED IN A FIELD BESIDE US & I WAS ABLE TO GET CLOSE ENOUGH TO ONE & SEE AN OPEN SIDE HATCH…NOTICE THE TOP HATCH & LADDER FOR ALIENS TO CLIMB DOWN…………:))

Our wandering travels took us down well known roads. I drove school bus on some of the them a few years back in the early nineties one of my many part time jobs had me out on those very roads delivering rural newspapers.  It was a Rooster nailed to a tree that reminded me of that today.   Don't recall that delivery job paying much but I was doing something I enjoyed doing & for me that was & still is priority. Had myself a white Mazda pick-up truck at the time. Started my run about one o'clock every afternoon except Sunday. It was the Stratford Beacon Herald I was delivering & I may have had a about 250 newspapers to deliver. Each newspaper was wrapped in a red plastic sleeve to protect if from the weather. Papers were stacked in bins. Loaded the bins in the back of my truck & started out with a couple of additional bins of papers dumped in the cab on the floor & seat beside me. With both windows down I headed off out into the country for a run that took about 3 hours. And that meant doing some hustling to get it done in that time. Throwing a newspaper from a speeding vehicle on a loose gravely country road is not something for everybody & it was a skill learned by a lot of practical experience. Each one of those papers had to find their target which was the farm's laneway. Missing a driveway & having the paper slide down into a grassy or snow filled ditch was not acceptable. And one had to gauge the wind factor many days too. We called throwing those newspapers, 'flying the papers'. On the left side of the road on windy days I threw the papers low almost slapping them on the road as they skidded on up into the driveways. Throwing a plastic sleeved paper too high & the wind could catch it & blow it back on the road behind me or off into the ditch or field. And of course one had to throw the paper slightly before the driveway so it would skid it's way to the target. Same thing for laneways on the right side of the road but a trickier throw. Some guys used the left arm over the roof method but I preferred the passenger window throw.  Using my right arm I had to zing that paper out the open passenger window without taking off my side view mirror. My Mazda was a standard floor shift as well so it was a very tricky bit of business keeping the whole operation running smoothly & not ending up in the ditch down side up. Slippery newspapers stacked on the floor, front seat, & dash. One hand on the steering wheel, radio blasting, one arm flying newspapers out the windows & all the while shifting gears for slow downs & watching for Roosters on trees, fence posts, or mail boxes. Roosters?? 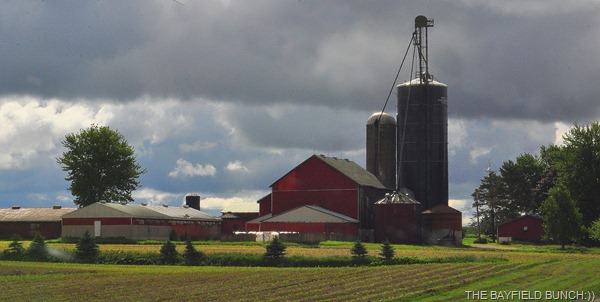 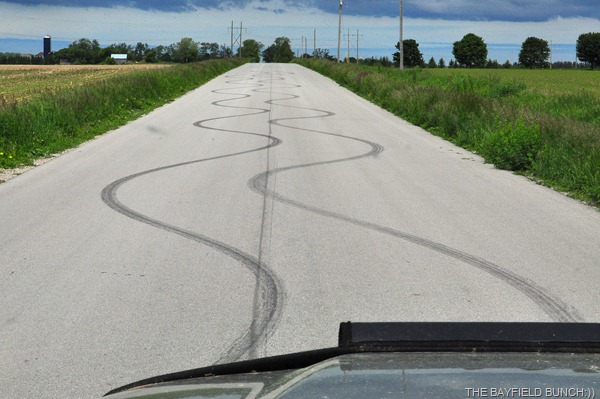 Even for the seasoned drivers it could be difficult to remember 2 or 3 hundred farm lanes & who received a Stratford Beacon-Herald & who didn't. And then there were the miles & miles of country roads with countless dozens of turns & in some cases, U-turns. Well that's where the Roosters came in. Every Beacon-Herald subscriber had a square metal plate with a white Rooster in a red circle visibly attached to something near the end of their driveway. A driver upon seeing the Rooster knew to throw a newspaper into that farm lane. These same Rooster signs were also affixed to trees or posts at corners telling the driver whether he had to turn right or left onto another country road. If the Rooster's legs were pointed right that meant a right hand turn. Left meant left. An upside down Rooster with legs pointed to the sky on somebody's mailbox or fence post meant that was the last subscriber on that road & a U-turn was in order. So, one had to be on their toes & paying attention at all times. One missed driveway always meant one angry Beacon-Herald subscriber phoning in to the newspaper office at the end of the day. Luckily, I had a better memory back in those days & it didn’t take me long to get onto my route. Have always had a good sense of direction & geographical things have a habit of sticking in my mind. For someone like myself who always preferred working alone this was a great job. Out in the beautiful countryside every day surrounded by a beautiful scenery. What more could one ask for.  And then there were the rainy days!! 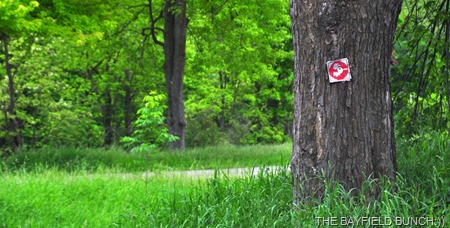 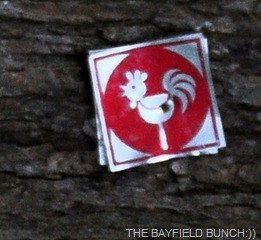 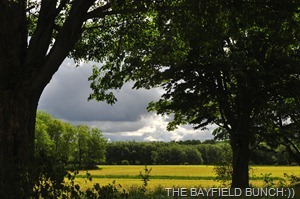 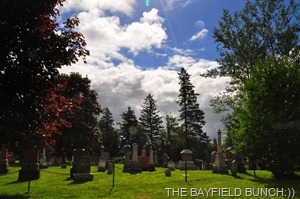 Rain was always a challenge. Forty & fifty miles an hour on loose gravel roads winging papers out the windows was tricky enough but add rain to the mixture & it gets a little more challenging. Windshield wipers going, puddles of water on the road, rain blowing in both open windows, arms soaked & plastic sleeved wet newspapers sliding around in the cab sure kept a fellow on his toes. And then came Winter!! 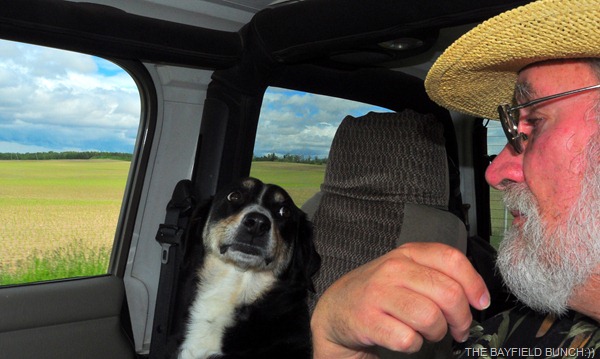 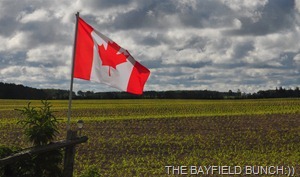 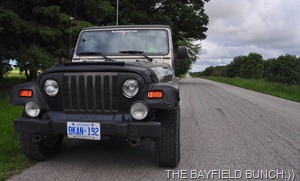 Imagine temperatures down around & well below freezing. Nobody in their right mind is going to drive down the road with both front windows wide open, except rural newspaper delivery people that is. No way around it. Windows have to be down in order to 'fly those newspapers'. You can have your floor heater on full tilt but it doesn't matter. That constant freezing blast of frigid air whipping in both windows cancelled out whatever paltry little wisps of warm air there was trying to get out of the heater. I wore a full body snowmobile type suit, woolly mitts, & a heavy ski mask toque on the worst of those days. And there was still no staying warm. And then there was the freezing rain days, ice covered roads, snow drifts & snow storms with their blinding white outs.  Try throwing a plastic encased newspaper into a slippery ice & snow covered driveway & it could end up in the next county before it got stopped.  But that's the way it was & still is for many of those drivers out their doing their daily rural newspaper routes. It was a fast paced exciting job that required a lot of sharp driving skills each day & I just loved the challenge of that. If Bayfield had a newspaper big enough requiring a route driver to 'fly their papers' into area farm laneways I would be the first guy on their doorstep applying for the job. I would just love to go out & fly me some papers again..........:)) 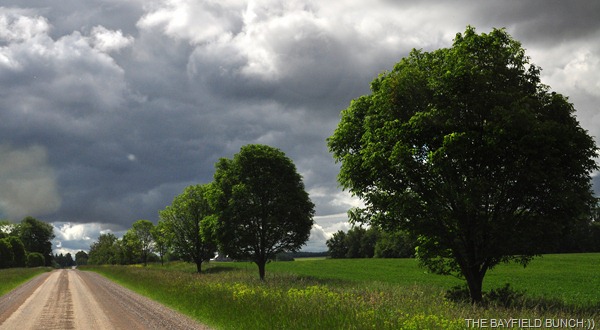 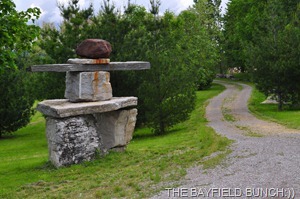 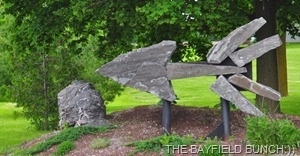 INTERESTING STONEWORK AT THE END OF THIS FARM LANE

Kelly’s new Granddaughter's name is Ella Gail & her second name is Grandma Kelly’s real name.  Kelly is not sure when she was nicknamed Kelly but she thinks it was high school.  Her real name is Gail & it was the name originally picked out by her Father.  Gail (aka Kelly) was pleased her daughter Rebecca chose the name Ella Gail for her new daughter:)) 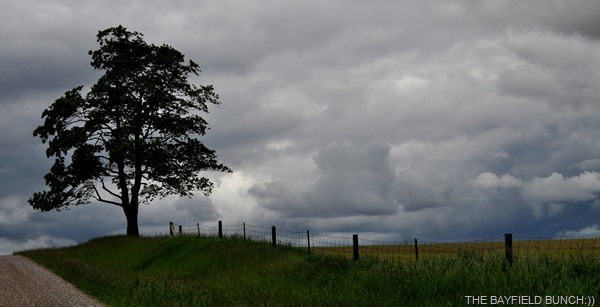 A guy walks in for his interview.
The interviewer asks, "What's the first thing you notice about me?"

2nd guy walks in for his interview.

This guy on the way out says to the 3rd guy "What ever you do, don't say anything about his not having any ears - He'll kick you right out."

3rd guy walks in for his interview.

The guy looks at the interviewer intently for a few seconds and responds, "Why, you wear contact lenses don't you."

The interviewer says, "That's impressive that you're so observant. How could you tell I wear contact lenses?"

3rd guy "Because you don't have any damn ears to hang glasses on."