KELLY IS ‘SPARED’ THE NEEDLE IN THE BACK PROCEDURE THIS MORNING 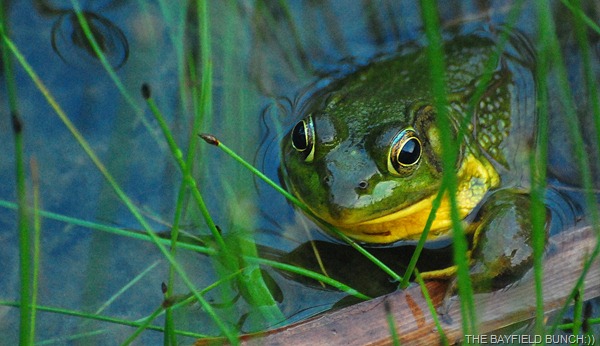 Now that it has warmed up again it is nice to sit quietly in the early morning hours with windows & doors open listening to the morning songbirds waking up. Last night we were serenaded to sleep once again by our front yard pond frogs. Now if only we could see the big Moon traveling across the star studded sky most nights it would kind of complete that magic nocturnal summer cycle. Sure do miss those big Arizona night skies with twinkling stars from mountain top to mountain top. With a whole bunch of luck this summer I'm hoping we'll be standing under those starry skies again in another 4 or 5 months. Anxious to get rolling again. We've been home long enough now. I'm hoping this is the year we can do our Colorado 4 corners trip & head to Arizona with a round trip through southern Utah & Arizona's Monument Valley. 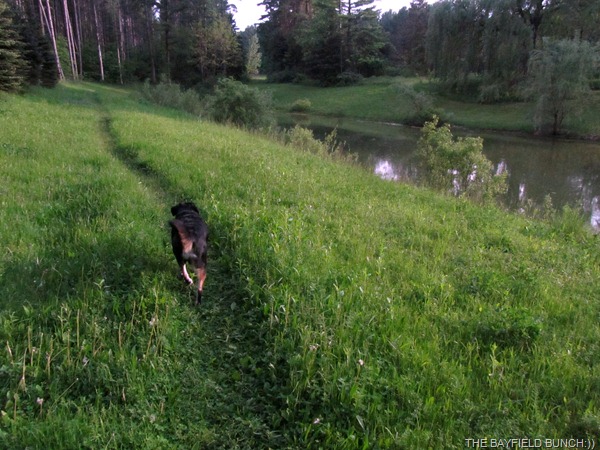 EASY TO SEE OUR WELL WORN PATH THROUGH THIS YEAR’S LONG GRASS ALONGSIDE THE GOOSE POND…WE HAVE BEEN WALKING THIS TRAIL FOR OVER 10 YEARS NOW & EVEN TRUDGED IT THROUGH HEAVY SNOW THE FIRST 4 WINTERS WE WERE HERE…WE ARE THE ONLY ONE’S WHO GENERALLY EVER GO THIS WAY……………………………
Aside from night sweats Kelly had a good night. She still feels she might be running a low grade fever though & cannot sleep on her left or right side. She's down about 10 pounds as well but of course she doesn't mind that part of it. We were on the road headed for the Stratford General Hospital by 8 a.m. this morning. Again, just a nice pleasant drive through the countryside. And not one single traffic light between our house & the hospital. Now how nice is that........... 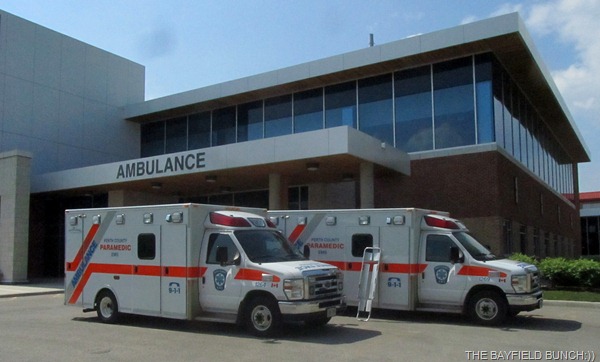 We were at the Emergency entrance on the early side & they took Kelly right in. Think it's the first time either one of us has ever been to an Emergency department without a waiting room full or half full of people. We were the only one's there. Guess it was too early for a lot of folks to have figured out how they were feeling about their day yet. 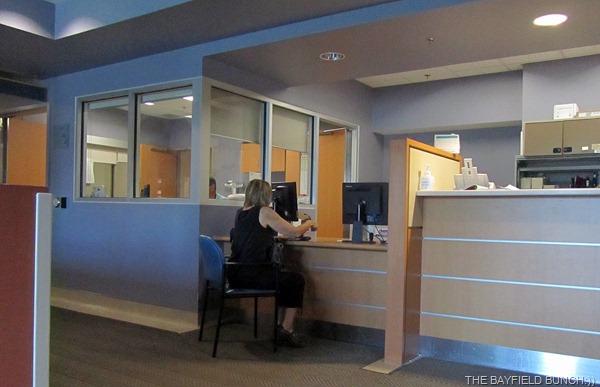 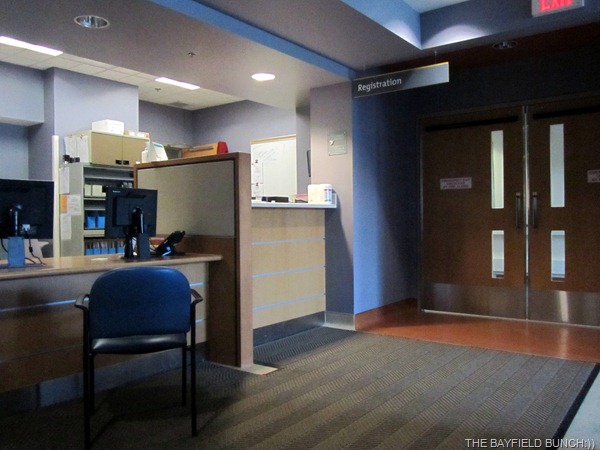 A preliminary Ultra-Sound showed there was not enough fluid left around Kelly's lungs to safely draw out a sample with a needle so she was spared that procedure. THORACENTESIS  But she was not spared a slightly painful blood work procedure.  Not your ordinary small few vials of blood this time. These were specialized tests & I watched Kelly grimace a few times as 4 large containers already filled with various levels of fluid were used. Two large containers from one arm & then two large containers from the other arm plus some smaller vials.  Both Doctor's Haffner & Saffie came into the room & talked to us explaining what they are doing & how they are going about trying to find the cause of Kelly's health problems. They are convinced something is amiss somewhere but have just not been able to pin point it yet. Another Echocardiogram & Ultra sound are being scheduled as well as further blood & urology tests. We were back out of the hospital shortly after 11 & headed home, well almost. A stop at the Goderich Hospital's emergency department first.  And just a few words to say how nice most medical personal have been over these past few weeks.  Very helpful, professional, & genuinely concerned. 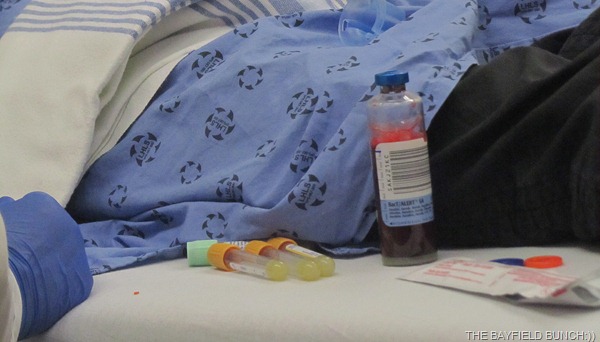 There was some equipment to be picked up for one of Kelly's future tests & Stratford suggested we pick up that stuff at the Goderich hospital because it would be more convenient to return the results to Goderich in the 24 hour turn around time. We were sure glad we had decided to take the Santa Fe today instead of the Jeep. The Santa Fe has A/C & by the time we reached home around 1 p.m. the humidity had begun to become a problem. Kelly headed for her bed to rest & I headed for my recliner to watch my favorite sitcom at 2:30, CORNER GAS.  Although the series wrapped up in 2008 I still love watching the re-runs & that gang of bumbling small town Saskatchewanites still puts a smile on my face every time:)) 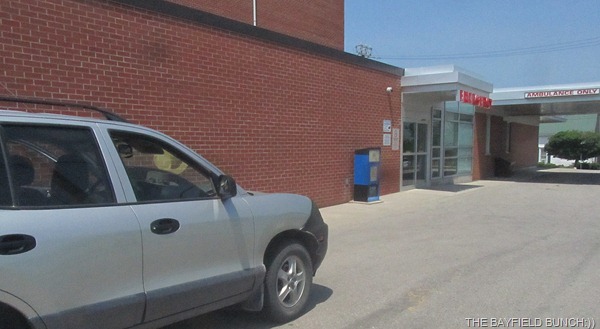 A FINAL STOP AT THE GODERICH HOSPITAL BEFORE HEADING HOME

In a nutshell……Kelly is feeling much better than a week ago at this time.  She knows she has a ways to go before the Doctor’s can get to the root cause of her problem which may end up being some kind of a hidden infection somewhere in her body or an auto immune problem.  The next round of tests & test results should narrow it down.  She will be back to the Goderich Hospital Tuesday for more blood work plus another Echocardiogram of her heart & an Ultra-Sound of her stomach.  In 2 weeks we will be back to the Stratford Hospital to meet with her Doctors to see what they have come up with.  Hopefully we will have some more answers soon.  It’s turning out to be a bit of a stressful medical issue summer for both of us.  But we’re doing Okay:)) 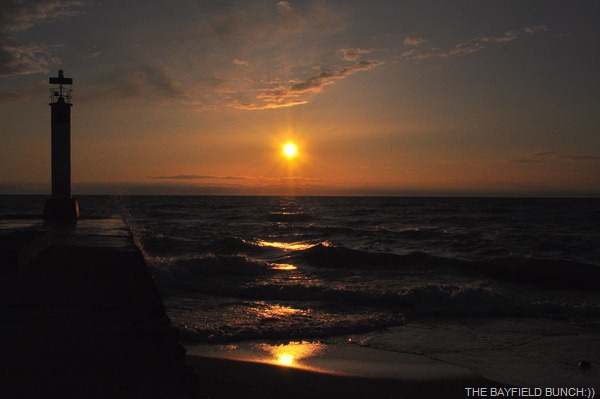 GROANER'S CORNER:(( From a jet pilot we hear, "Yay though I fly through the Valley of Death I shall fear no evil for I am at 80,000 feet and climbing." From that same pilot we may also hear, "When one engine fails on a twin-engine airplane, I always have enough power left to get me to the scene of the crash." If that same pilot were to make it back to base after his harrowing flight he might also say, "You know that your landing gear is up and locked when it takes full power to taxi to the terminal."
-------------------------------------------------------------
- Tourists see the world, travelers experience it.
- Home is where your pet is:))
- "If having a soul means being able to feel
love and loyalty and gratitude, then animals
are better off than a lot of humans."
(James Herriot)
- The pessimist complains about the wind; the optimist expects it to change; the realist adjusts the sails -William Arthur Ward
- The only thing better than right now will someday be the memories of right now...AL.
- It is not so much having nothing to do as it is not having the interest to do something....AL.