A BETTER DAY FOR KELLY BUT NIGHT’S ARE STILL DIFFICULT 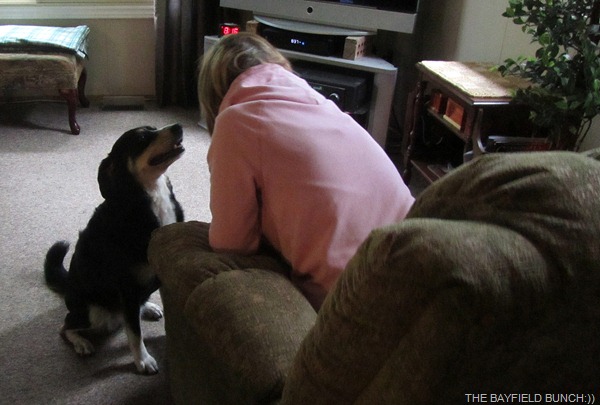 Our overnight rains brought in slightly warmer temperatures this morning & oh how welcome that finally is. I'm sure many people in our area lost early Spring plantings to the cold nights laden with frost lately.  Had us a deluge of rain all day making any bird activity in our front yard very scarce.  Skies were heavily overcast & there was not really enough light for any bird photos anyway. 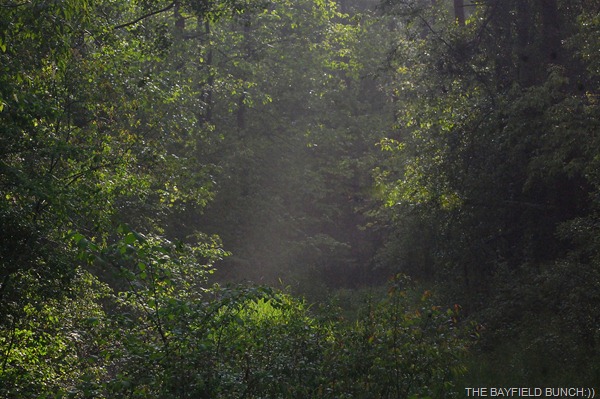 Luckily, we have not had a Squirrel problem around our bird feeder again this year. Oh they are out there alright but ever since putting the tin stove pipe around the bird station post two Springs ago we have not had a single Squirrel breach the security. Biggest problem in our front yard again this year are neighborhood cats decimating our frog pond. Our driveway's security light came on Monday night around 10 & I saw a big light colored fluffy cat heading for the pond. Frogs are easy prey for marauding cats............ 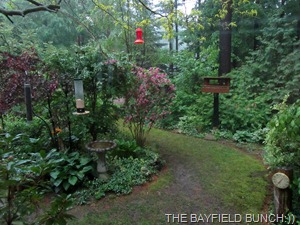 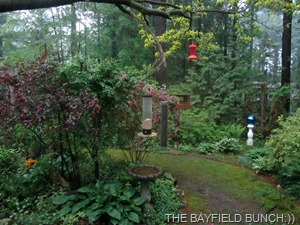 TURNED OUT TO BE A VERY RAINY FRONT YARD DAY

Don't exactly know when it was I stopped using shampoo but for sure it was quite awhile ago. Bar soap is a cleansing agent so why wouldn't it work for cleansing hair as well. Well in fact it does clean hair just fine. When I finally got that straightened out in my head that was the end of using shampoo for this guy. Didn't figure my hair needed 'extra body', 'total care & nourishing', or to be 'conditioned'. Conditioned for what...the Olympics!! Didn't need a 'Volumizing Root Boost' either. And 'stronger, shinier, & softer', for sure didn't sound appealing. Never 'snowed' on any of my shirts so never did feel the need for any of that 'Head n Shoulders stuff. And when did the words 'extra bouncy', 'beautifully manageable', 'lasting results', & 'softening moisture', ever mean anything to a man when it came to hair anyway. Since when did my hair need to be 'revitalized'? How did it get unvitalized in the first place? 'Super Serum', now that is downright scary. And what's with 'strong hair'? I usually associate strong with muscles, not hair. 'Natural well being' might have meant something if it had concerned my health & not that stuff growing on the top of my head. 'Salon Glazed hair? I think not!! 'Anti-Dandruff Shampoo Infused w/ Natural Mint & Tea Tree Oil'. Are you kidding me!!!! Oh & don't forget 'Toxin-Free.' Geeeeezzzz, that's gotta be pretty important eh. Know what......just got myself to thinkin & probably all's I really need is just a new haircut. After I wash my hair with a good bar of soap that is.............:))

PHEEBS STOPS TO SMELL SOME FLOWERS ALONG THE TRAIL EARLIER THIS EVENING
Ever wake up in the night to the sound of rain on the roof & suddenly realize you have left your car windows down, some inside chairs, outside & a shed door or two open. Yep, it's happened to me before alright but not last night. I luckily pre-guessed the weather & wound up the Jeep's window, put a couple chairs in the shed & closed the door. Isn't it nice to sometimes win a few:)) Oh no, could there be 2 of us!!  Noticed a comment on a previous post from Cyndi over at WANDERLUST in which she stated, “I'm working this summer at the Mammoth Hot Springs General Store in Yellowstone - a guy walked in yesterday who could be your twin. I told him he had a twin in Canada named Al, and he said, "My name's Al." He showed me his driver's license to prove it. He even had a hat on just like yours”……..Good grief can we be living in a Parallel Universe?  Heavens to Murgatroyds………………… 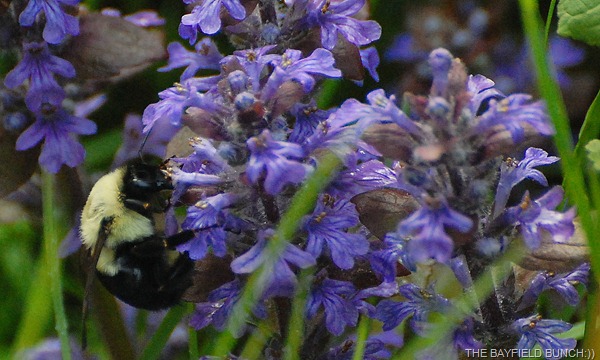 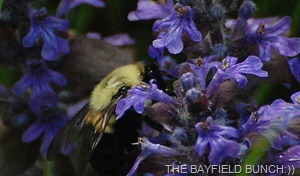 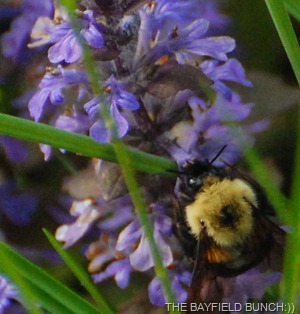 Of course wouldn't you know it. Appointment with my Nurse Practitioner this afternoon & my hip was on it's best behaviour. I could have jumped up & danced on the examining room table.  My NP is now sending my hip X-rays to a Stratford Surgeon as well.  Doctor Pototschnik removed painful bone spurs from both my big toe joints back in the late 90’s & is an excellent Surgeon.  If push came to shove I would much prefer having my hip done in Stratford as opposed to London but I guess it will depend on who can do the hip surgery first.  My NP also said the average waiting time for hip replacement is 9 months & she said it is highly unlikely either the London or Stratford Surgeon will be able to do anything for me before Spring of next year.  And that’s the way it is here in Ontario unless it is an emergency or a person is in dire straights.   That old saying ’One Day At A Time’ takes on more meaning for me now……………………….. 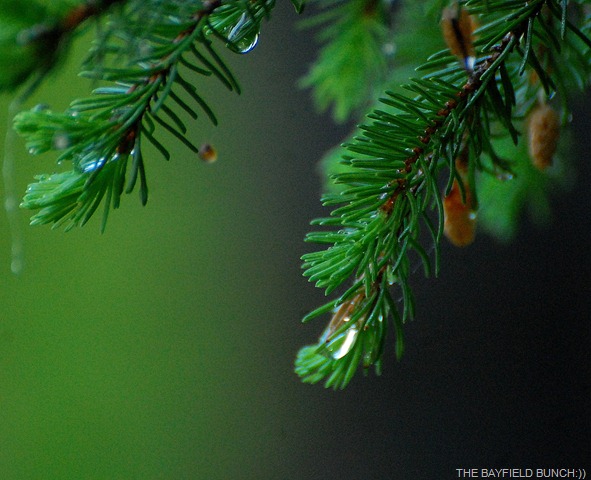 Kelly had a better day & even skipped out to the Bayfield Library this morning.  She whupped up a nice roast beef supper with potatoes & gravy but by 8 p.m. the pain we thought was gone had returned to her upper chest affecting her breathing again.  We’ll see what the morning brings………………………… 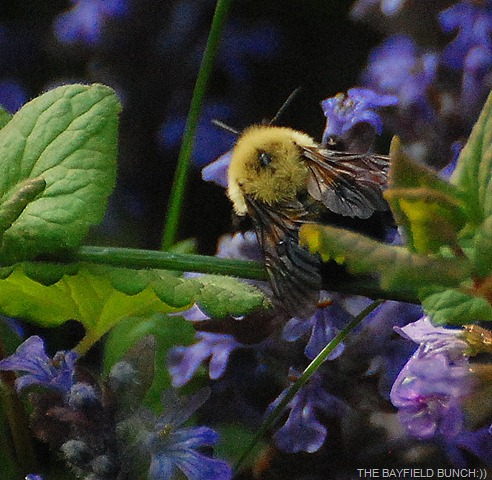 JUDY FROM TRAVELS WITH EMMA MIGHT HAVE CALLED THIS BUMBLE BEE PHOTO…….’THE END’
GROANER'S CORNER:(( Two Newfie's walk into a pet shop. Right away they go to the bird section and Mick says to Paddy; "That's them". The shopkeeper comes over and asks if he can help.

"Yeah, we’ll take four of them there budgies in that cage up there", says Mick, "Put them in a paper bag"

The shopkeeper does as asked and the two pay for the birds and leave. They get into Mick''s van and drive until they reach a cliff with a 500ft drop.

He then takes the two birds out of the bag, places them on his shoulders and jumps off the cliff.

Paddy watches as his friend drops off the edge and goes straight down for a few seconds followed by a loud "Splat!"

As Paddy looks over the edge of the cliff he shakes his head & says, "This budgie jumpin'' is too dangerous for me..."

A few minutes later, Billy approaches. He too has been to the pet shop and is carrying the familiar 'paper bag.'

Billy pulls a parrot out of the bag and Paddy notices that in the other hand Billy is carrying a gun.

"Watch this Paddy" he says, as he launches himself over the edge of the cliff.

Paddy watches as half way down Billy takes the gun and shoots the parrot. Billy continues to plummet until he joins Mick’s mashed remains at the bottom of the cliff.

Paddy shakes his head and says, "I'm never trying that parrotshooting either."

After a few minutes, Danny strolls up. He too has been to the pet shop and walks up with his 'paper bag.'

Danny pulls a chicken out of the bag. He puts the chicken above his head, holds its legs and launches himself off the cliff & crashes to the rocks below.

Once more Paddy shakes his head saying, "For the life of me Danny, first there was Mick with his Budgie Jumpin, then Billy Parrotshooting and now there you go........... Hen Gliding!!