WE HAD OURSELVES AN RV MISSION THIS MORNING

SHARING THE COUCH
Despite a drizzly dreary fog shrouded start to the day we had ourselves a mission this morning. Yaaaaaay:)) Gotta love any kind of mission with an enjoyable purpose.

NOT SHARING THE COUCH
When we bought the Sunseeker a few months ago in Quartzsite Arizona we knew that if it didn't work out for us we could always re-sell it in Canada, re-coup our money & probably make a few dollars to boot. Want to emphasize that we did not buy it with the sole purpose of re-selling it though. We're just not into buying & selling things. Our 2 day quick shake down cruise to Borrego Springs last February told us we were going to have to make some major changes to the rig if it was going to be comfortable for us. Our trip home earlier this month verified that so we've been sitting on a few decisions these past number of weeks. We had also held off having a solar system installed as well before leaving Congress. Wanted to be absolutely sure we were going to keep the rig. 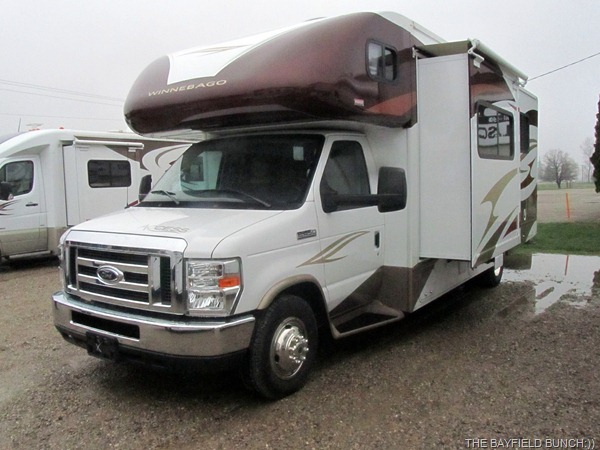 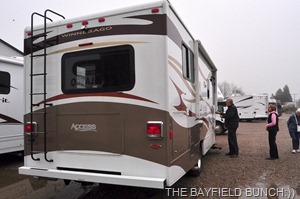 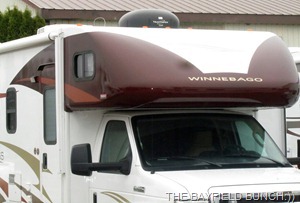 26’ WINNEBAGO ACCESS…WE LIKED THIS ONE WITH THE ROOF MOUNTED SATELLITE DOME
A reader had inquired awhile back if we had started any renovations yet & of course we had not because we were still not totally convinced this was the right RV for us. With all the pluses the Sunseeker has we just couldn't get around a few of the negatives. The dinette we could have had removed & replaced with a couple recliners etc but the tiny bathroom was not changeable. And it's the first rig we've had with the bathroom sink outside the bathroom & we decided that is not something we like. Sleeping in the upper bunk is fine for me but with the recent problems I have been having my right hip & possible hip surgery in the future, climbing in & out of an upper bunk was probably going to be a problem. The corner bed is a bit difficult getting into & out of plus nearly impossible to make so that has been another concern. Other than those problems we love the Sunseeker. It's a dream to drive with it's quick & nimble handling. Lots of pep & fits into any gas island with ease. Great storage, nice upgrades, etc. But in the end after much thought & discussion we find it's 23' is just a tad inconveniently small for us. We have decided to look for a 26 footer & that's where we were today. 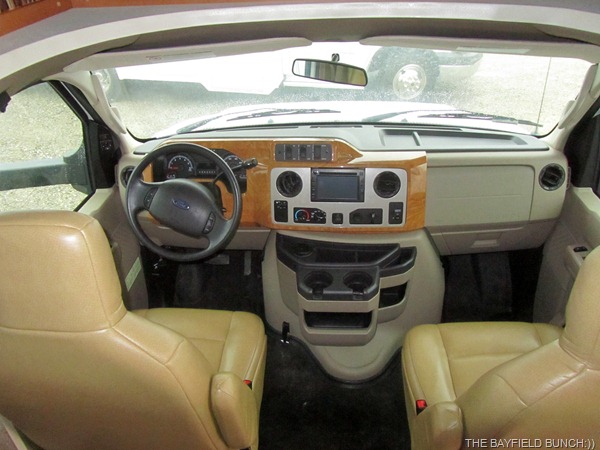 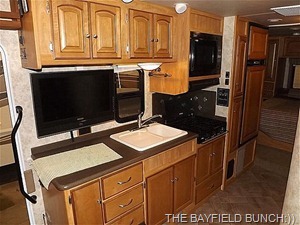 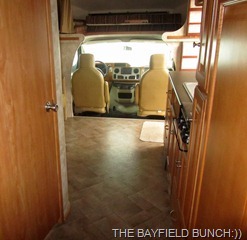 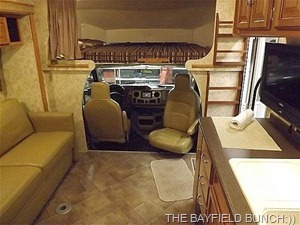 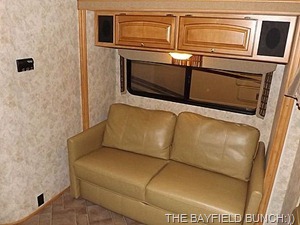 (3 of these pics are not mine)
Kelly had spotted on-line a 2011 26' Class C 'Winnebago Access' at an RV Dealership in London Ontario so our mission this morning was to head over & have a look at it. We were curious about the floor plan etc. Aunt Jean, Kelly & I had the Sunseeker rolling for London through a drizzly fog about 9:30. We took the Sunseeker because we wanted to get an outside idea of what kind of a trade in value they had to offer. As expected the salesman grossly low balled us which indeed did reaffirm our best option is to sell the Sunseeker privately.  (NOTE:  No, we are not planning on buying this Class C.....just looking) 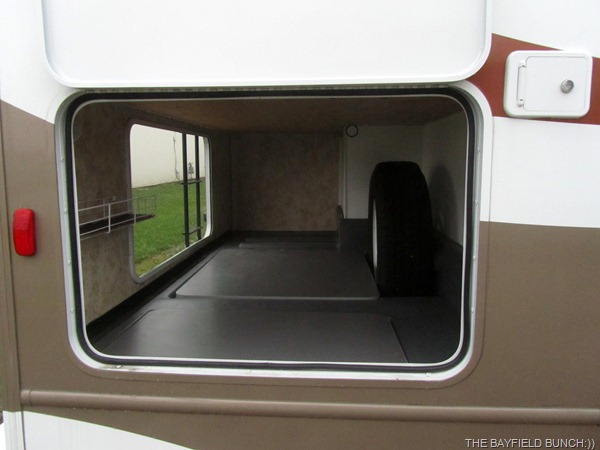 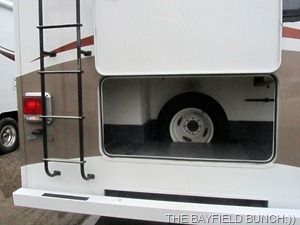 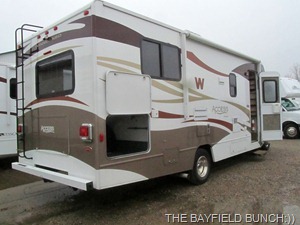 We did like the 26' Winnebago Access we looked at though. The rig had one slide & we liked the idea of both the driver & passenger seats being able to swivel rearward. Bathroom size was acceptable & nice to see the sink inside. Kelly especially liked the walk around bed. Couch folded out into a blow up air bed & we were surprised at the kitchen counter space. Not too crazy about a blow up air bed though. This rig had a nice surround sound system as well plus in roof satellite. Sitting on a Ford Chassis with a V-10 engine I liked the beefy front end look of the cab. Also liked the large storage area at the rear of the rig. The floor plan & 26' length convinced us this is the type of vehicle we will be keeping an eye out for now. We did look at an older Kodiak Class B but it was just simply too old & too dated. We don't mind going back to maybe a 2011 if we find the right one but do not want anything older than that. If we do not find the absolute best deal we will just keep our perky little driver friendly Sunseeker:)) 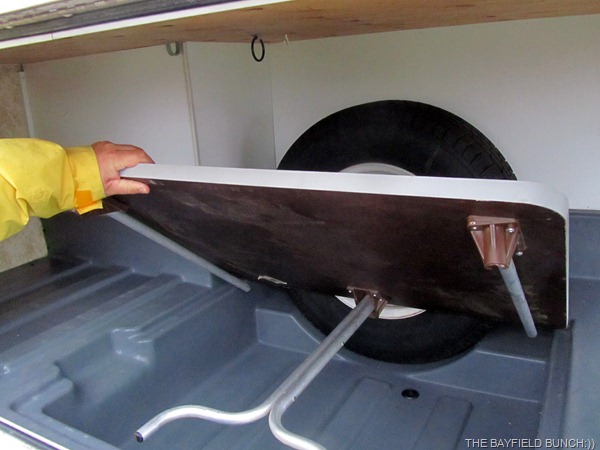 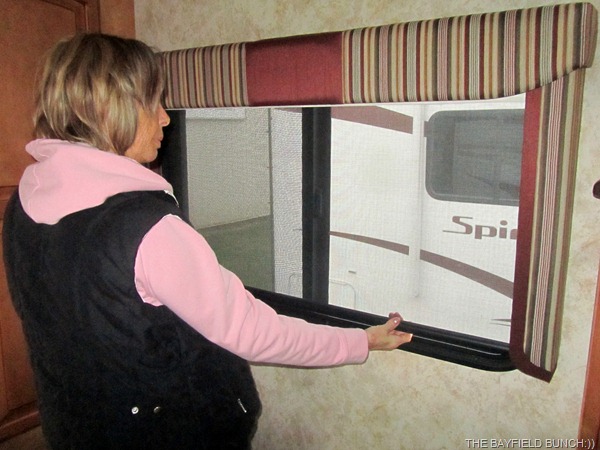 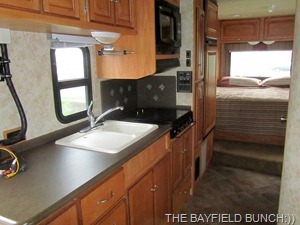 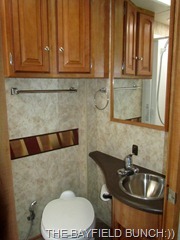 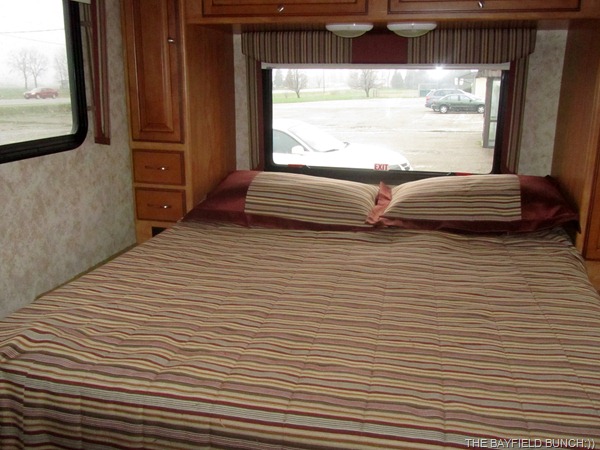 Weather smartened up a bit on the way home & we stopped at a Tim Horton's for lunch in Lucan Ontario. Couldn't dally too long though because Kelly had a Doctor's appointment mid afternoon. Chest pains had returned. That appointment has led to her having to go for an echo cardiogram. We'll wait & see what the results of that test determine. 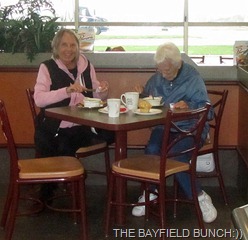 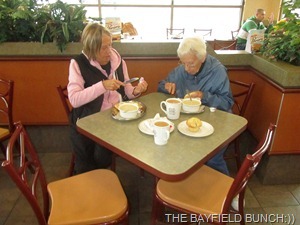 SOUPIN IT UP AT TIM HORTONS
I was really surprised at how easy the motorcycle fired up Sunday with the new battery installed. I barely hit the starter switch & the bike was running. How nice compared to last summer when I had to crank & crank & crank it. And I don't know how many times I had to pull the battery out to recharge it. How nice to roll out of the Park & head the bike down the road for the first ride of the season. The big wind driven grin usually spreads across my face right about the time I hit the top end of second gear popping it into third & feeling that power punch grab hold. Nice:)) 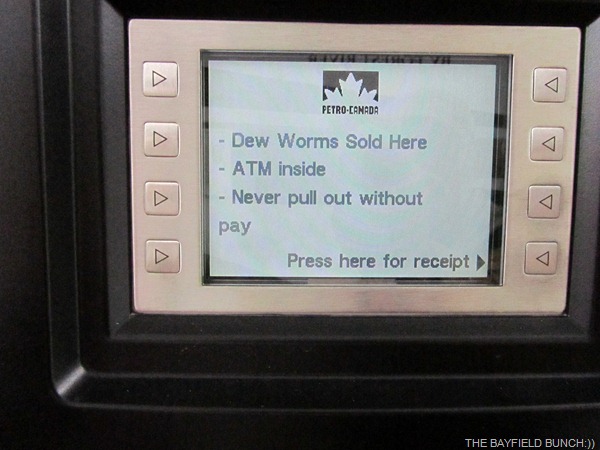 STOPPED FOR GAS ON THE WAY HOME AT A PETRO GAS STATION ONLY TO SEE THIS SIGN ON THE PUMP…NOW WHAT THE HECK DO DEW WORMS HAVE TO DO WITH GASOLINE??  THERE WASN’T EVEN A LAKE NEARBY……..
GROANER'S CORNER:(( In California's Sonoma Valley, where vineyards cater to wine snobbery, a woman phoned the classified ad department of a newspaper. She offered for sale what sounded like "well-aged Caumeneur." The ad-taker was unfamiliar with that particular, wine, but was used to the infusion of French words into the local vocabulary. "Could you please spell that?" she asked.
"You know," said the woman impatiently, "C-o-w M-a-n-u-r-e."
-------------------------------------------------------------
- Tourists see the world, travelers experience it.
- Home is where your pet is:))
- "If having a soul means being able to feel
love and loyalty and gratitude, then animals
are better off than a lot of humans."
(James Herriot)
- The pessimist complains about the wind; the optimist expects it to change; the realist adjusts the sails -William Arthur Ward
- The only thing better than right now will someday be the memories of right now...AL.
- It is not so much having nothing to do as it is not having the interest to do something....AL.