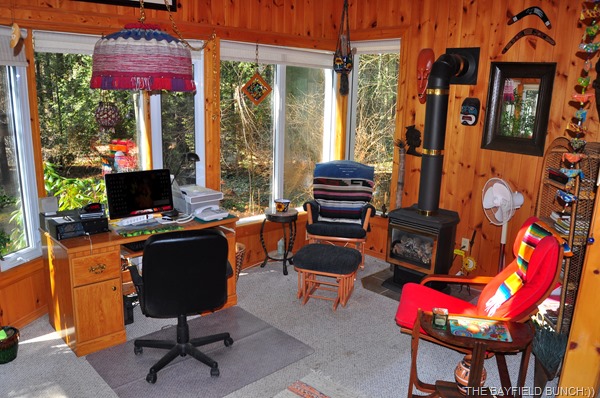 LOOKING FORWARD TO BLOGGING FROM OUR COMFORTABLE SUNROOM THIS SUMMER AGAIN

Checked the weather map first thing to see where the rain was. Our utility trailer is not enclosed so knew we could not afford to get caught in a rainstorm bringing Uncle Harry’s stuff home this morning.  Rain was not due until early afternoon so we had a window of opportunity.  Luckily we have a big carport to park the trailer in upon our return.   Not much storage space inside the Jeep so we decided Kelly would take our Hyundai Santa Fe to Mitchell as well. And it’s a good thing we decided to take the second vehicle because we filled them both up. 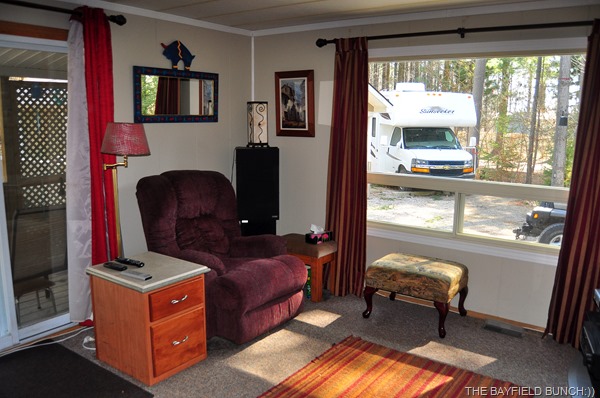 MY LITTLE CORNER OF OUR LIVING ROOM

Cold, damp, & foggy sums up our early morning 2 car & trailer convoy to the Ritz Villa Care Facility. A quick check-in with staff & we were off down the hall to Harry’s room to begin our sad task. Everything was still there, except Uncle Harry. Kelly packed things up & with the aid of a 4 wheel cart I transported Harry’s belongings to our two vehicles & trailer outside. I was amazed at the amount of stuff in his room. Two & a half hours later we were done & left Harry’s room for the final time. A last look out his window at what had become Harry’s outside world for the past number of years & we were gone. For readers who have had to do this you will understand what we were thinking & how we were feeling this morning. 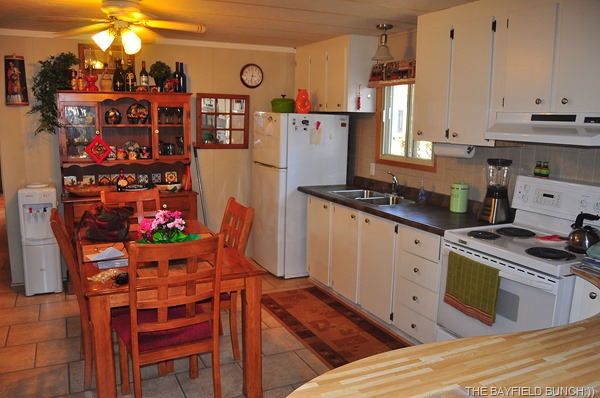 It was a slower drive home using paved back roads. Had a bit of weight in the small utility trailer & the tires on it are somewhere over 10 years old. We bought that trailer used when we moved from the old Weenie Roast Ranch to our present place in Bayfield. It made many trips back & forth & has paid for itself many times over. It is now mainly used for hauling yard waste to our recycle area here in the Park. But when needed, like today, it once again came through for us & did the job it was built to do.
---
The weather Gods smiled on us & waited until we had safely returned to Bayfield & backed the utility trailer into our roofed carport. Half an hour later the rains began again & as I type this tonight it is still raining. Had us some thunder along with that rain as well.  I did have a couple tarps along with us this morning just in case. 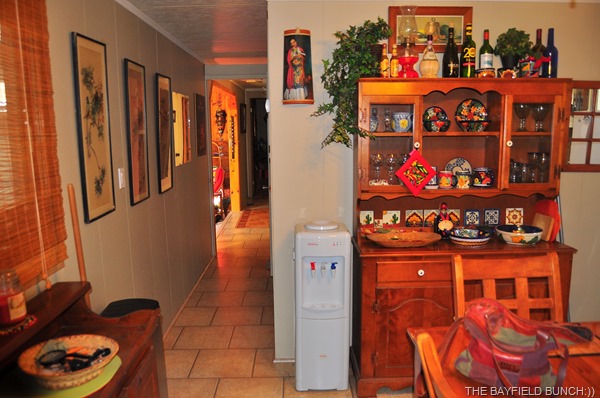 I figure it was simply the fatigue of the last 5 days that finally caught up with me this afternoon. We were only home a short time when the energy just literally drained out of me. A rare headache set in & I felt like I had been run over by a big Mac truck. Crawled into my recliner, pulled a blanket over me & remained there in a rather lethargic state for about 5 hours.   Hoping for a better day Wednesday.  But Kelly hardly stopped working today. She was literally buried in paper work, emails, faxes, & phone calls. In fact that is why I think I got so darn tired….just watching her hopping from one task to another.  A big stack of mail to sort through, Harry’s estate affairs, phone calls to a lawyers office, the funeral director, banks, insurance company, income taxes to ready, & still paper work at this end for the Sunseeker.  License tags, inspections, etc.  And much of it all has to be done pretty much this week sometime. We are still in a big jumble ourselves here from unloading the rig. Big, big, yard clean-up waiting outside & we are forecasted to have 3 or 4 more days of rain. In fact, a winter storm warning for Thursday has just been issued.  Maybe I can finally get caught up with some blog reading this week.   Now, am I complaining? No, not at all. Just stating where we’re at today.  Tomorrow we will be at somewhere else I'm sure & for today that is what makes life interesting.
---
Before leaving Congress last week I was surprised at the amount of space we had not filled in the Sunseeker. I had thought for sure we would not have enough room for everything & yet we had bin space left over. Nice not to be carrying extra weight on the road & especially nice at this end Monday when it did not take us nearly as long to empty the smaller rig. Of course we were speeded up by an incoming rain front which arrived about an hour after having all the main stuff moved into the house. 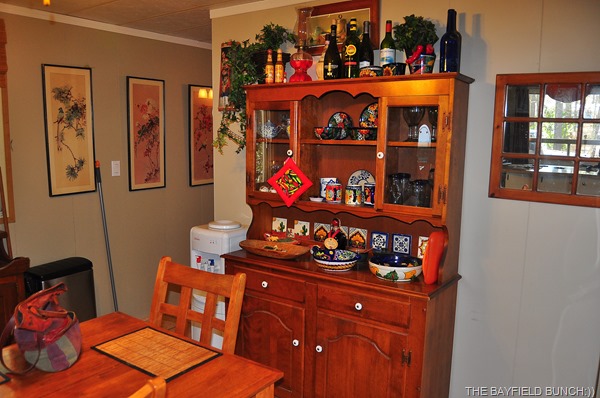 When we arrived in Congress last November 1rst we were so excited to be there & just walked around looking at everything saying. ‘Wow’. We do the same thing every year arriving home here in Bayfield as well. It is always a big ‘WoW’ feeling to first walk around outside looking at everything. Tall Pine trees, all the greenery, & despite the mess old Man Winter has left, it all looks so great, so cozy. And then we unlock the door & walk in the house for the first time in five & a half months. Snow Birds may identify with this when I say, ‘double Wow’, everything just looked so great, so neat, & so trim. We see things we forgot we had, we see the house in a new light after being away from it for so long. We just walk around saying, ‘Wow’ look at this, ‘Wow’ look at that. I was so impressed I had to take some photos. These reactions several times a year are just a couple of the things we enjoy about being Snow Birds. We always look forward to the abrupt & complete changes in scenery, living space, & lifestyle. And in between those lifestyle changes & scenery we get to go on some amazing road trips as well. For me, it is a combination of all those radical changes that keep life interesting. Maybe doesn’t work for everyone but it sure works for me & I wouldn’t want it any other way:)) 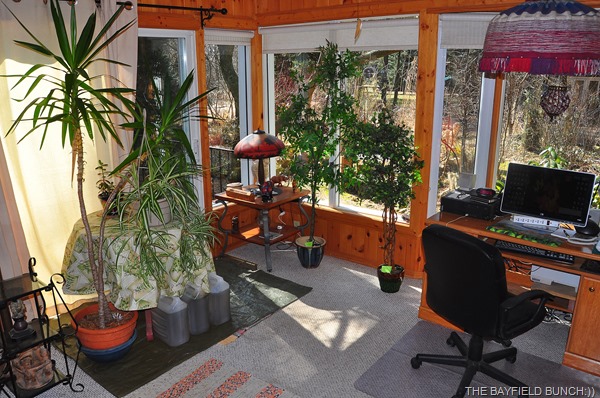 GROANER’S CORNER:(( A man traveling down a country road was forced to stop before a giant puddle covering the entire road. Looking to the side of the road, the man noticed a farmer leaning on a fence.
"Think it's safe to cross?" the man asked.
"I reckon so," replied the farmer.
The car was immediately swallowed by the puddle as the man drove in. In fact, it was so deep that he had to roll his window down to swim out of his car back to the surface. As his head broke the surface the man said to the farmer, "I thought you said I could safely drive through this puddle!"
"Well, shoot!" said the farmer, scratching his head. "It only come up chest-high on my ducks!"
-------------------------------------------------------------
- Tourists see the world, travelers experience it.
- Home is where your pet is:))
- "If having a soul means being able to feel
love and loyalty and gratitude, then animals
are better off than a lot of humans."
(James Herriot)
- The pessimist complains about the wind; the optimist expects it to change; the realist adjusts the sails -William Arthur Ward
- The only thing better than right now will someday be the memories of right now...AL.
- It is not so much having nothing to do as it is not having the interest to do something....AL.