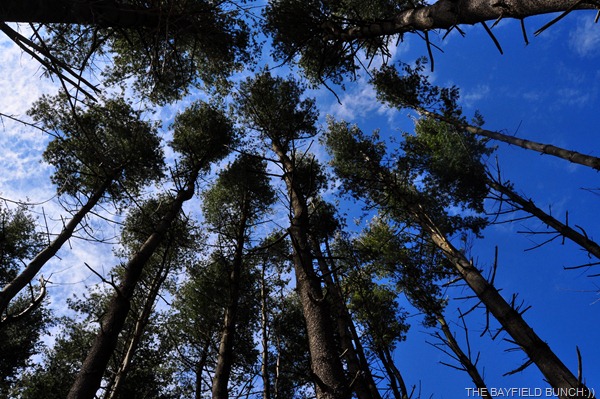 SO NICE TO SEE SUNNY BLUE SKIES FROM OUR BACK YARD AGAIN:))
WOW, what a pleasant surprise we had this morning....Sunshine:)) Talk about a wonder drug or magic elixir.   Sunshine after a long period of gloomy cloud shrouded & rain drenched days works for me every time. Like getting injected with a big dose of happy. So nice to see those first tell tale sunrise rays filtering through our Pine trees. Now, Mother Nature, if your reading this could you just crank the temperatures up big time please:)) 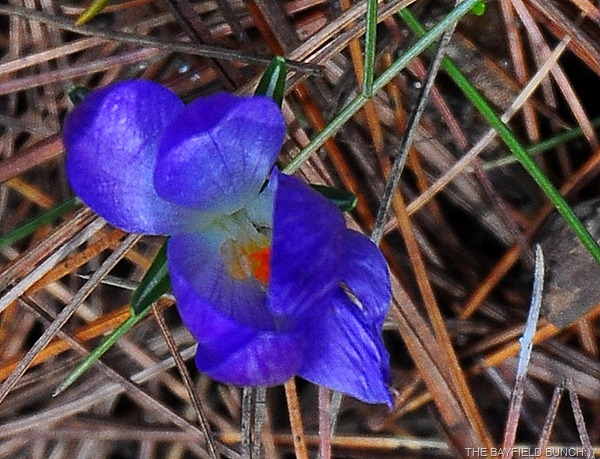 ONLY FLOWER I COULD FIND IN OUR FLOWERBEDS TODAY WAS THIS VERY TINY CROCUS
This mornings sunshine instantly recharged both my mental & physical batteries enough to log in about 4 hours of yard work today.  That’s a fair few wheelbarrow loads of pine needles raked up.  Also a preliminary clean up of our front yard frog pond.  Cold enough to see my breath for much of the morning but with the sun shining through the Pines I didn’t mind the cold. 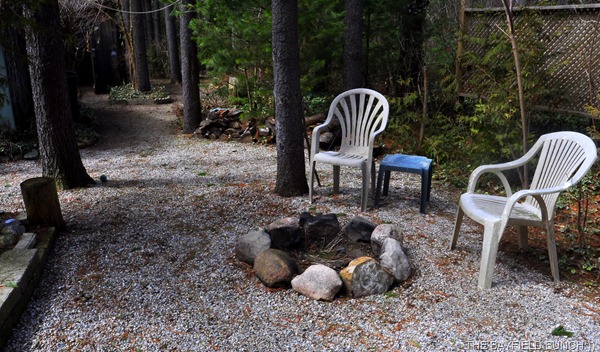 MAYBE IF I WERE TO GET A CAMPFIRE GOING HERE IT MIGHT BRING THE OUTSIDE TEMPERATURES UP
Not enough power in the Motorcycle battery again today so think I may be in need of a new battery.  Have had the bike for 6 years now & who knows how long the battery was in the bike before I bought it.  The bike is a 2002 Honda Shadow Aero 1100 & the battery in it now is a Yuasa YTX14-BS Honda.  Maybe it’s still the original battery.

A MALE ROBIN & A MALE MALLARD DUCK
Still no power restored to Aunt Jean’s Motel room so the only things there are her belongings as she continues to stay with cousin Mary Ann 3 miles away in Tavistock.  In fact there are still thousands of people without power since Thursday night’s storm. 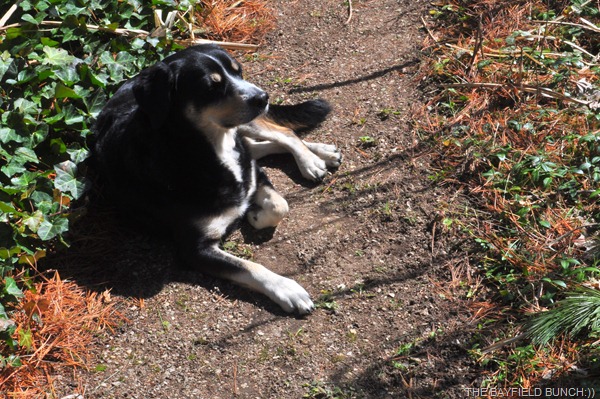 NEVER FAR FROM MY SIDE WHEN WORKING OUTDOORS IS MY LOYAL COMPANION & BEST HELPER
Put out a couple more bird feeders out this morning but other than a couple Blue Jays, a few Dark Eyed Juncos, a Black Cap Chickadee, 2 Red Wing Blackbirds & 1 Mourning Dove there hasn’t been a lot of bird activity in our front yard yet.  One shifty eyed Squirrel cruised through eyeing the feeders but Pheebs put the run on the Varmint. 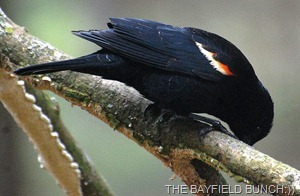 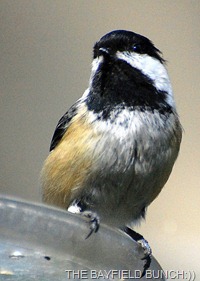 Darn right leg & hip have been giving me a lot of grief these past couple days since working around outside.  Same problem I had most of the winter in Arizona during & after the big property clean-up.  Seems like the problem is not going to clear up on it’s own so looks like I’ll have to make a Doctor’s appointment to see what’s going on.  Hate having to do that but I was told by my Doctor last Fall to get a PSA test soon as we returned from Arizona anyway so might as well get that all done in one fell swoop.  I’ll get that underway next week.  In the meantime I am having to stick pretty close to my temporary cane again.  And I am also using up some of the pain meds concerned readers sent me this past winter in Congress.  Thanks again folks:)) 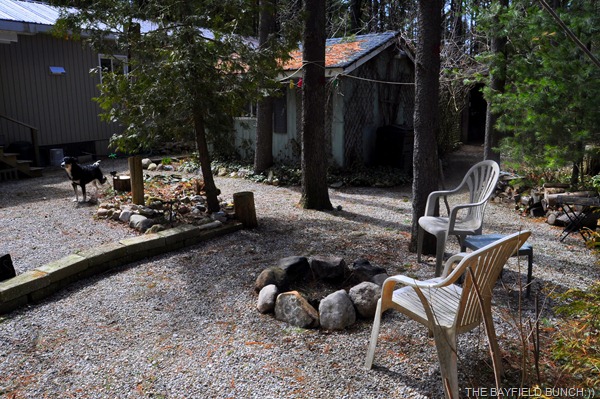 PHEEBS KEEPS A WARY EYE OUT FOR RASCALLY SQUIRRELS
We have a long day ahead of us tomorrow with Uncle Harry’s funeral at 2 p.m. so I may or may not put a post together when we get home.  I’ll just see how it goes.  As I have said several time before, writing is therapeutic for me & it always helps when I sit down & write about how I feel.  It is not often I can talk about how I am feeling but it is often I can write about how I am feeling…………………………

A PAIR OF DUCKS ON THE POND THIS MORNING
GROANER’S CORNER:((  Two persons are discussing whether the state of Hawaii is pronounced 'Havaii,' or 'Hawaii.'  There they stood arguing and arguing, until they decided to ask a person walking by.  'Excuse me sir, is Hawaii pronounced 'Hawaii' or 'Havaii?''
The gentleman said, 'Havaii.'   Looking at each other, and as the gentleman was leaving, one of the two said to him, 'Thank you.'  The gentleman replied by saying, 'Your velcome.'
-------------------------------------------------------------
- Tourists see the world, travelers experience it.
- Home is where your pet is:))
- "If having a soul means being able to feel
love and loyalty and gratitude, then animals
are better off than a lot of humans."
(James Herriot)
- The pessimist complains about the wind; the optimist expects it to change; the realist adjusts the sails -William Arthur Ward
- The only thing better than right now will someday be the memories of right now...AL.
- It is not so much having nothing to do as it is not having the interest to do something....AL.
Posted by Al Bossence at 4/14/2013