JUST UP THE ROAD FROM OUR HOUSE

It was bundled up against a cold south wind we were this cloudy March morning here in Congress Arizona.  A quick walk around the block & that was pretty much it for any outside activities today.

Now, a few thoughts on our shake down cruise.  With the much smaller Class C RV space we found ourselves bumping into each other like a couple mumbly pegs.  Certainly does require some getting used to when downsizing.  I think once we get our dinette problem solved we will have much more room.  Nothing we can do about the bathroom.  Small is what small is & there is no way around it.  I did try out the shower & if I had thought the Damon shower was small….I obviously had not met the Sunseeker shower yet.  I slept in the corner bed on our trip & Kelly slept in the upper bunk.  I think we will reverse that next time.   I didn’t find Crab crawling across that corner bed to my liking & Kelly did get a sore back from the upper bunk.  When I slept up there a few weeks ago I didn’t have any problem.  The kitchen stuff worked out OK but no handy counter space.  Of course our Damon didn’t have much either.  One of the biggest problems I had was where to put my stuff.  Cameras, books, computer, clothes, shoes, etc.  I do not like to be disorganized so I was in quite a state of mind for a couple days.  And with no comfortable place to sit while writing my blog, I either ended up outside in a lawn chair with a blanket over my head or on the bed.  But, that’s what a shakedown cruise is for.  Problem solving.  We’ll do better next time out & even better after that. 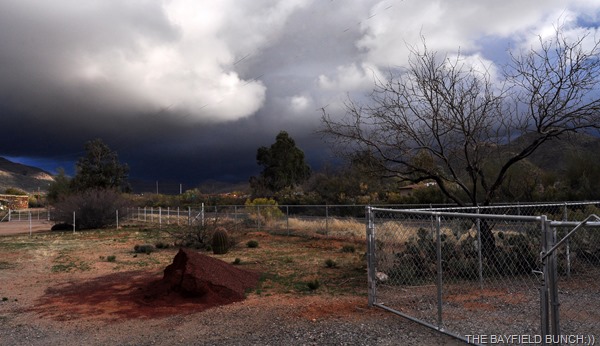 I was happy with the way the rig handled & ran.  No complaints there.  I do think Fords might have better closing cab doors though & for sure I do like the Ford front end grills far better than the Chevy’s.  Not being a brand loyal kinda guy it wouldn’t have mattered to me if this rig was a Chev or a Ford except it’s easier to get out of the Chevy’s driver seat to go into the coach.  Chevy engines are placed further forward.  Reading the write ups & reviews between the two, the Chevy does come out on top with it’s better performing & more fuel efficient engine.  Seems most Sunseeker folks prefer the Chevrolet chassis.  Made little difference to me.  Had this rig been on a Ford chassis with all the same upgrades for the same great price, then we would be driving a Ford today instead of a Chev. 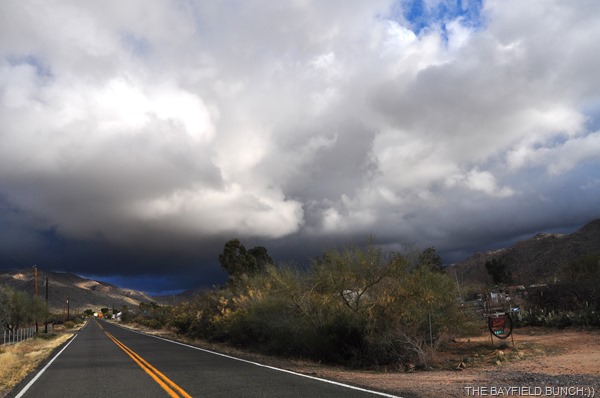 I think the biggest mistake we made on our shakedown cruise was to not prepare a check list before we left.  We forgot a lot of obvious stuff & it was kinda embarrassing for an experienced couple like ourselves to forget so many things.  I did remember to take an extra pair of socks. 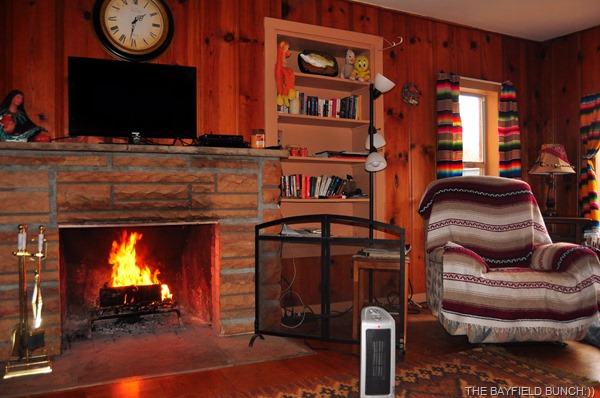 EVEN LIT A FIRE TODAY TO WARD OFF THE CHILLS

Donna, over at the CAVE DWELLINGS wondered about our eating arrangements in the Sunseeker because of no table.  We never had one in the Damon either.  Oh we had a dinette alright at first but we weren’t long in hauling that uncomfortable Mossmagator out of there.  We just kinda eat wherever we can.  Sometimes it’s a plate balanced on a knee, sometimes a TV table, sometimes my laptop is my tabletop.  We never have anyone in for supper or social events, so no need for a table.  It just gathers clutter & takes up valuable space. 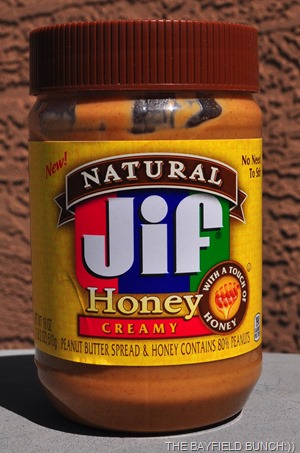 I really like Jif’s new natural Peanut Butter & Honey peanut butter.  Stumbled across it in a Walmart store a couple months ago.  But, there’s a problem.  In my opinion, it’s just tooooooo darn good & it’s just tooooooo darn accessibly simple to eat.  Before, I had to get out the peanut butter jar, the honey jar, & my piece of flat bread.  On goes the peanut butter followed by the honey which sometimes skids around in the peanut butter causing me great concern.  I then have to roll it up to eat it.  Lot of work.  With peanut butter & honey already mixed I have a tendency to go to ‘my stuff’ cupboard, crank the lid off the peanut butter jar & dig me out one mighty big whalloping hunk of PB&H with a kitchen knife.  In a split second it is down the hatch & I am back into the jar frantically digging for more.  Oh dear, this is not a good thing for the old weight program…………….

And a new Blog Follower today.  Welcome aboard TRAINMAN.  Or, is that, ‘all aboard’:)) 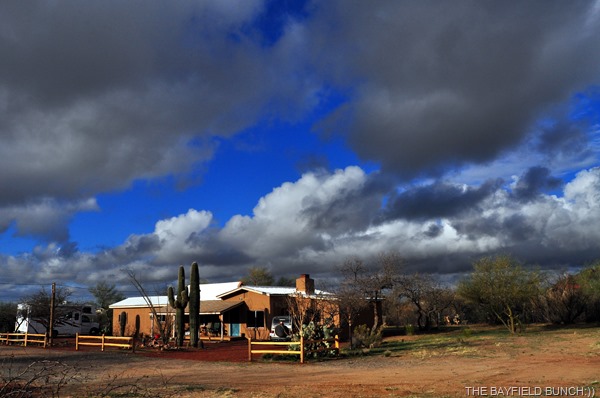 New neighbors on the street behind us & it appears they have about half a dozen dogs.  I think that brings the total number of dogs on our block to about 10,000 now. 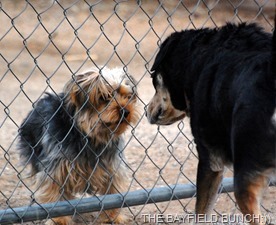 In the 7 years we have been traveling to the southwest we have never crossed the mountains to the Pacific coast.  Just have never had a big interest in anything over there, except maybe the ocean of course.  Not to say there isn’t a lot of interesting things, but for me the thoughts of all that traffic & people chaos just isn’t appealing anymore.  However, there is one city that has always stuck in my mind.  Thought if I had a chance to pick one city to see, it would be San Diego.  So, maybe next winter we just may make a special effort to get ourselves on over there.  Chris & Caron from TRAVELS WITH CC & DIXIE have been having a blast in San Diego this past little while.  RETIRED ROD & Loyce just left there.  And San Diego is very familiar turf for well known fellow RV Bloggers Nina & Paul from WHEELING IT.  If we do make a trip over that way we will definitely be checking out Nina’s San Diego posts about where to stay & what to see, etc.  We met Nina last winter at a farmer’s market on Christmas Circle in Borrego Springs:)) 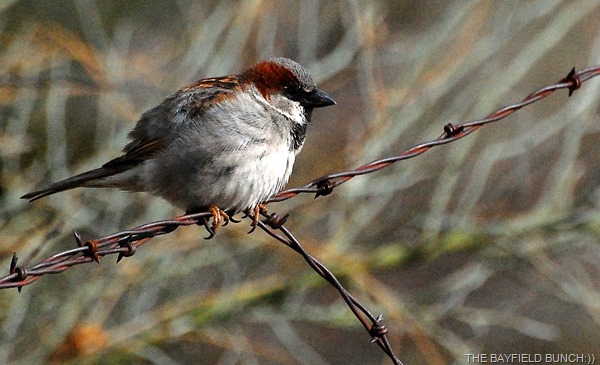 And here’s an outdoor couple with a sense of adventure who like doing the same kinds of things & traveling to the same kinds of places we do.  Check out their moderate risk factor hike in Utah’s Zion Canyon.  OH, THE PLACES THEY GO.  Watch for their adventures on our sidebar:)) 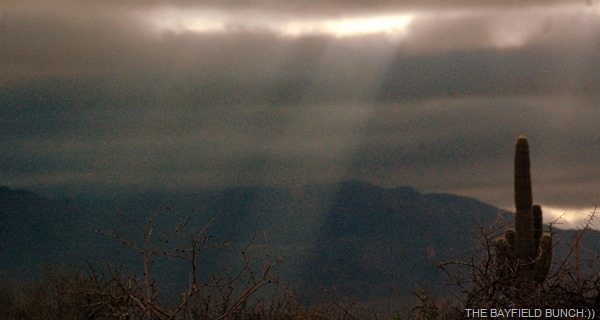 Although I do basically have a good sense of direction, I do get myself confoozled from time to time & especially here in the southwest.  This past week was no exception.  First, a few blogs ago while at the Clark Dry Lake Bed near Borrego Springs I mentioned about the night time glow of lights being visible as Riverside California.  Looking at my Benchmark Atlas this morning, I see that is incorrect.  I had been told a few years ago by another RV’er that glow over the Santa Rosa mountains was Riverside.  I should have double checked that.   The visible glow in fact is from the Palm Springs/Indio area of California, not Riverside.   Maybe my sense of direction is thrown off by the mountains or something.  And, I think I mis-identified the mountain range behind Borrego Springs.  I was calling it the Vallecito Mountains when in fact I think that mountain range is the San Jacinto mountains.  Made another geographical driving flub just a couple days ago in Indio as well. 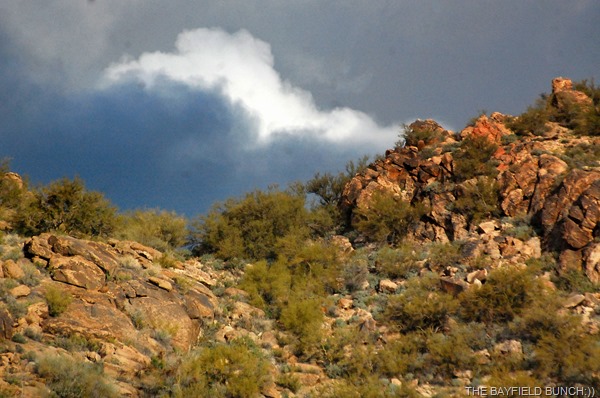 RETIRED ROD was actually right when he said the Home Depot in Indio was right next to Interstate 10.  I was wrong in saying it wasn’t.  As another commenter said, coming from the south it can be confusing finding the I-10 cut-off east.  After looking at that area of Indio on MAPQUEST this morning I can see why it is confusing & where we got confused.  I hadn’t realized we were actually on I-10 heading west when we pulled off onto Jackson Street.  In the morning I again didn’t realize we drove back onto I-10 from Jackson Street when we headed south.  Oh the beefuzzlement of it all.  But, you know what, bet I’m not the only guy who gets beefuzzled sometimes.  But maybe, just maybe, I am one of the few guys who will admit it:))

DESPITE TODAY’S COLD WIND & RAIN, OUR BACKYARD BIRDS WERE NOT WAVERED FROM THEIR SEED

And our weather today?  Mid morning rains brought on early afternoon bits of hail & some big time thunder.  Wind gusts swung our shed doors around & it looked like a bird convention at our feeders.  Nothing seems to bother those guys when it comes to weather……

When the clouds lifted off the nearby Weaver Mountains late this afternoon they left behind a dusting of snow………. 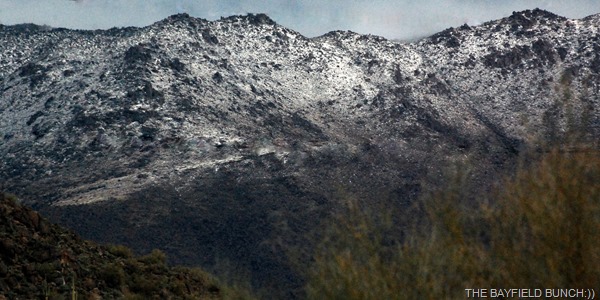 But, we did end the day on a positive note under sunny blue skies & the promise of warmer days ahead:))