A NICE ‘HAPPY HOUR’ FINISH TO AN OTHERWISE DULL DAY THINGS ARE BEGINNING TO BLOOM & GROW IN THE DESERT
Wished there was something worthwhile I could tell you about the majority our day but their isn’t.  If the day had gone any slower it would have been going backwards.
---
However there was a highlight this afternoon & it involved a ‘Happy Hour’ from 4 to 5.  Many years since we’ve dropped in for a happy hour anywhere but today that is just what we did.  And we took the Sunseeker:))
---
Mike & Pat McFall live over at North Ranch which is only a few miles from us.  I have been re-miss in getting over to say Hello all winter & it was weighing heavy on my mind.  Fact is I’m more than a little re-miss at dropping around to see most anybody.  My fault, not theirs.  Mike had mentioned a month ago about wanting to have a look at the Sunseeker so this afternoon we drove on over for a visit.  We knew Mike & Pat host happy hours from 4 to 5.  Their friends Larry & Jerri were there as well.  Larry & Jerri had just dropped around to see us here on Ghost Town Road last week. 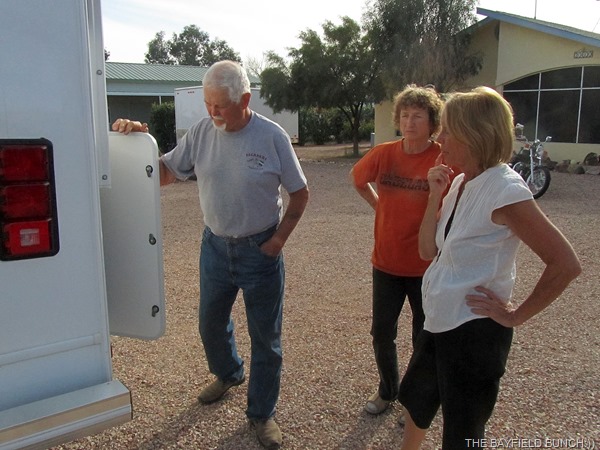 MIKE CHECKS OUT SOME OF OUR STORAGE SPACE
I liked Mike & Pat from the first time I met them over a year ago.  Mike’s one of those big easy going guys who makes you feel right at home.  He’s the kind of fella you can clown around & kibbitz with & I like that.  I’m an old kibbitzing kinda clown guy from way back myself & it’s nice when people I feel comfortable enough with enable me to reach inside & haul that kinda goofy fun character out of myself again. 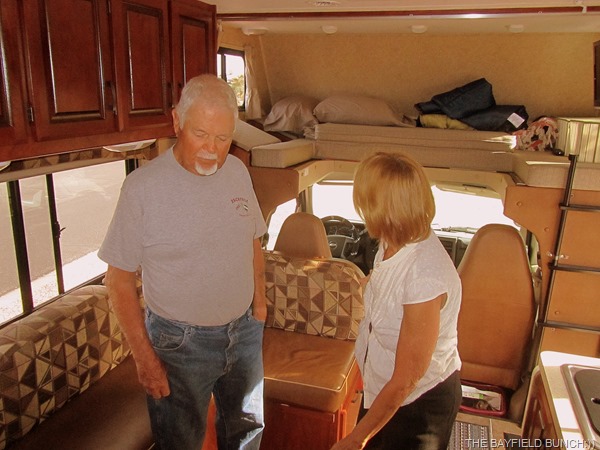 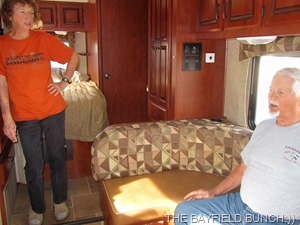 PAT SAYS, “WE REALLY MUST BE THINKING ABOUT DOWNSIZING” & MIKE LAUGHS SAYING, “WHATEVER YOU SAY DEAR”
Had ourselves a little tour of the Sunseeker & a second tour of Mike & Pat’s big beautiful Foretravel Motorcoach.  We could easily park our Sunseeker in their living room.  Very impressive to say the least.  We will be heading back over to Mike & Pat’s again before we pull out for home in a couple weeks.  Pat said she’s gonna hold me down on the ground & make me eat a Shrimp!!  Yousa, yousa, yousa:(( 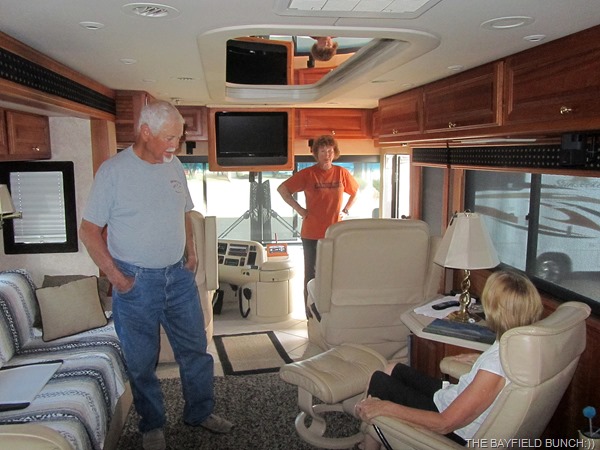 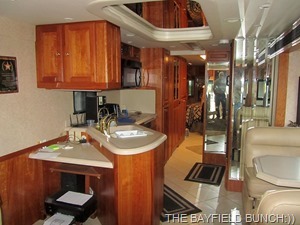 SURE IS A NICE COACH THESE FOLKS HAVE & I LOVE ALL THOSE REALLY NEAT-O ROUND GAUGES ON THE DASH
All my frustrations & rants with that miserable MAGNADYNE radio in the Sunseeker has finally been justified.  Kelly, on-line this morning with the Forest River forum & several other forums found out those Magnadyne radios are not good pieces of equipment.   Just as I thought!!  I know a bit about sound quality & no matter how much I tweaked the equalizer settings on that system I could not get the quality of sound that radio should have produced.  People said Forest River installs good speakers but the sound quality problems lie within the Magnadyne radio itself.
---
But it isn’t just the sound I do not like about that radio.  As already mentioned, there’s all that finicky touchy feely hard to see screen crap.  There is one whole forum dedicated to complaints about those Magnadyne touch screen radios.  People have been dumping their Magnadynes & replacing them with the much superior & user friendly Kenwood radios.  Same features like DVD, Sirius, Blue Tooth, GPS, iPod, etc. etc.  And here’s the best part.  Kenwood’s have volume control knobs & push button controls integrated with the touch screen technology.  Yes, yes, yes, real knobs again:))  People in the forums have raved about excellent sound quality & ease of the Kenwood radios operation.  Also the brighter much easier to see screen.  Are we considering swapping out the Magnadyne for a Kenwood?  Yes we are but it’s just not in the budget this decade.  And you know, I like it when I complain about something & I actually turn out to be right about whatever it is I am complaining about.  Yep, I like when that happens a lot:))))))) 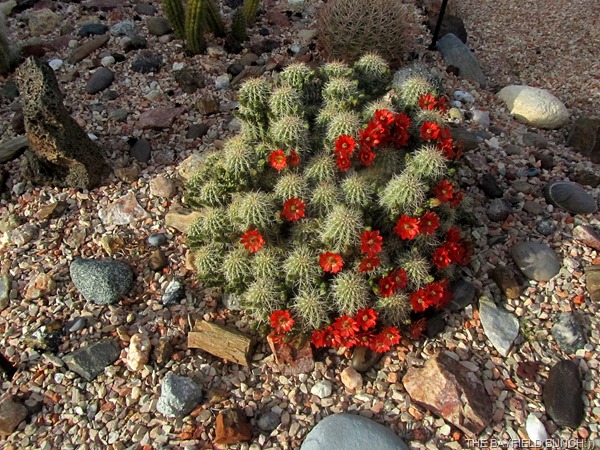 NICE CACTUS BLOOMS IN MIKE & PAT’S FRONT YARD CACTUS GARDEN
While researching that radio stuff this morning Kelly did come across a few other Forest River features we were not aware of.  The Jenson television is wired into the radio system letting the television play through the rig’s sound system.  Another yes, yes, yes.  As reader’s know I have long complained about the crappy tin can sound of television speakers.  DVD’s in the radio can also be seen on the overhead television as well.  Nice:))  And in another unrelated feature we found out there is a switch operated battery pack thingy under the driver’s seat to start the Chevy engine in case batteries are accidentally drained.  A nice safety feature.  That under seat battery pack can also start the generator if coach batteries are drained as well. Double nice & I am sure there are other Sunseeker features we haven’t even come across yet. 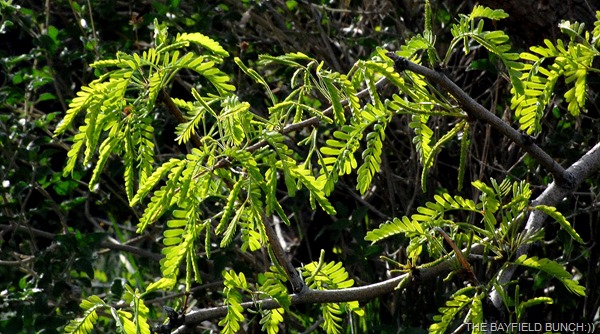 NICE TO SEE THE MESQUITE TREES BEGINNING TO LEAF OUT
Were you lucky enough to have been born with a happy face?

I wasn’t, I was born with a face that would make a Gargoyle nervous.  It’s all in the Genes I guess.  My Dad had a stern looking face & his Dad had a face that could cause an earthquake to change it’s mind.  I remember as a little Tyke being so afraid of my Grandfather on my Dad’s side.  He had a head of snowy white hair, red ruddy complexion, & a look & stare that could punch a hole through solid granite rock. And, he had a temper to match that look too.  I just shook in my little socks every time I saw him.  My Dad & his two Brothers inherited that look as well & a slightly toned down version of it has been past on to me.  It was not uncommon over the years for people to ask me, “what are you mad about”?  I could be bubbling over with joy about something but my face would never show the bubbles.  My stern stony face easily conjured up descriptive words like, mad, grouchy, PO’d, angry, bored, grumpy.  No wonder I referred to myself as a Cursmudgeon in later years.  I looked & still do look the part!!  Yes, I know there is no ‘s’ in Cursmudgeon but it’s just the way I like to spell it & think of myself:))
---
As a small kid in my home town of Tavistock Ontario I hung around with another kid called Doug Brenner.  Doug had a big round toothy grinned happy face.  He was one of those kids you saw coming a mile away because his face looked like a big beaming ball of bright sunshine & he lit up the whole neighborhood.  I was so discouraged with myself every time I looked in the mirror & seen this skinny slab of drab plain wood looking back at me.  I wanted so much to have a Doug Brenner face & be popular like he was.  He attracted people, I scared them away.  I even tried propping sticks in my mouth to stretch my face into a big smiling circus clown face.  But alas, nothing ever worked.  I was stuck with my face & that’s all there was to it.  In fact I’m still stuck with my face & I can see a part of my Grandfather’s stern look in every photo I see of myself.  I can be standing there with what I think is a big smile hanging on my face & yet the photos show nothing.  Not even a smirk.  Always that same blank stern look.  Maybe it’s about time I get me some Ocotillo branches & try that sticks in my mouth thing again.  I wonder where Doug Brenner is these days.  Bet he’s just beaming his way though life as always….. 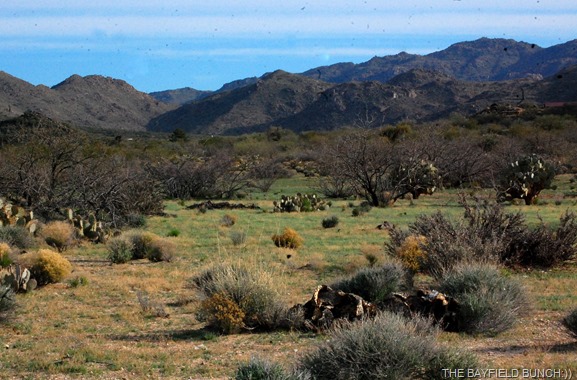 AND THIS IS ALL JUST A BLOCK BEHIND OUR HOUSE:))
GROANER’S CORNER:((  A woman turned to her husband and said, "Next week is our 30th wedding anniversary. What do you think we ought to do?"  Her husband thought carefully before giving his answer. "Have a moment of silence?"
-------------------------------------------------------------
- Tourists see the world, travelers experience it.
- Home is where your pet is:))
- "If having a soul means being able to feel
love and loyalty and gratitude, then animals
are better off than a lot of humans."
(James Herriot)
- The pessimist complains about the wind; the optimist expects it to change; the realist adjusts the sails -William Arthur Ward
- The only thing better than right now will someday be the memories of right now...AL.
- It is not so much having nothing to do as it is not having the interest to do something....AL.
Posted by Al Bossence at 3/21/2013