OH NO, DAD’S GONNA TRY & PUT THE TIRE BACK ON THE WHEELBARROW

My bedroom window sill is wide & also the perfect height for leaning my elbows on.  And, that is just what I did Tuesday night as I stood there in the warmth of the house & watched the big cheese colored Moon slowly lift itself up & over the Weaver Mountains.  At home in Bayfield I never get to see the moonrises because of all the Pine trees around our house.  How special it is here in Arizona every year to see the Moon not only rising at night, but setting in the morning as well.  And, a double bonus tonight.  From my computer chair beside my bed, I was able to see the moon travel slowly across my window from corner to corner.  And, a third bonus…..the moonbeams backlit our two giant Saguaros which I can see from my chair as well.  Sometimes, life is just tooooooo good:)) 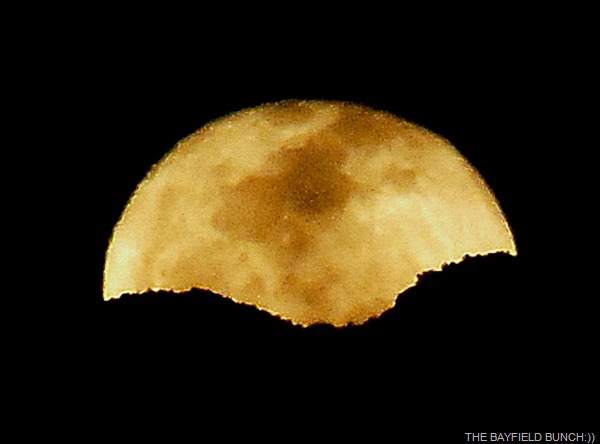 Couple folks have expressed concern about Rattlesnakes while hiking.  Rattlesnakes are our biggest worry with Pheebs.  We have never seen one in the 6 winters we have been traveling in the southwest, but we know they are around.  On the advice of locals, our desert hikes are usually early in the morning in the cool to cold desert air this time of year.  Would have never done Tuesdays hike through those boulders had it been warm with the sun shining on the rocks & dark earth. 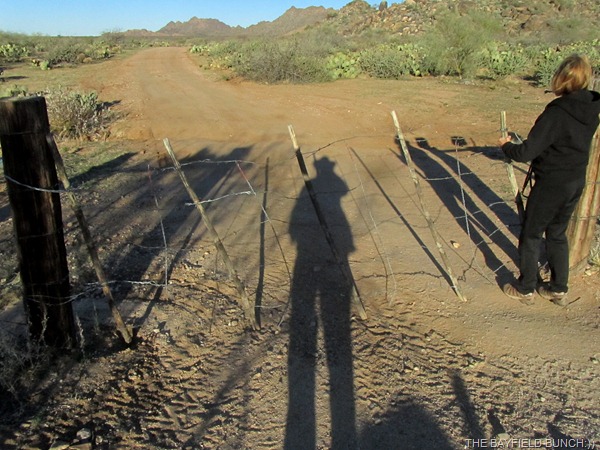 Looking across the country’s weather picture I sure have to be thankful for where we are. With our temps heading up into the 70’s this week I feel a little guilty having grumbled about our few flakes of snow, a few day’s cold wind, some clouds, & a dusting of ice on a water puddle or two. Being a true Canadian, I do get myself a little crazy about the weather sometimes. 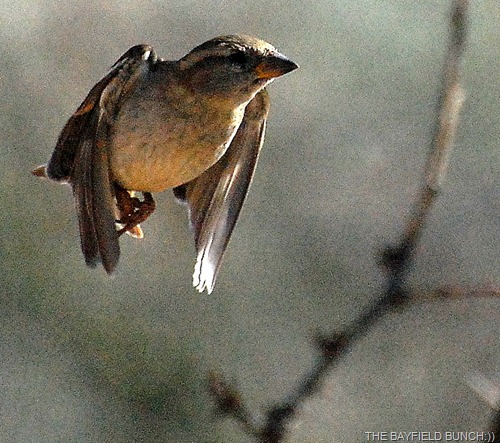 In the countries grand weather scheme, I think we have it about as good as it gets here in Arizona. We do not live under an impending earthquake shadow like our California neighbors to the west. We do not have Hurricanes, Tornadoes, severe tropical storms, or torrential rains during the winter like our neighbors to the east. No stormy snow blinding blizzards with damaging hail & ice storms bringing down power lines & grinding everything to a halt. Very few cloudy days compared to our neighbors in the northwest. No harassing or annoying bugs in the winter & most of the critters that might give one a nasty bite are underground hibernating. And then there’s Arizona’s magnificent desert mountain scenery. Awwwww yes, I see Arizona has swept me off my feet once again tonight. Just a pretty darn nice place to be & a pretty darn safe place to spend the winter months for sure. And, safe in more ways than one………:)) 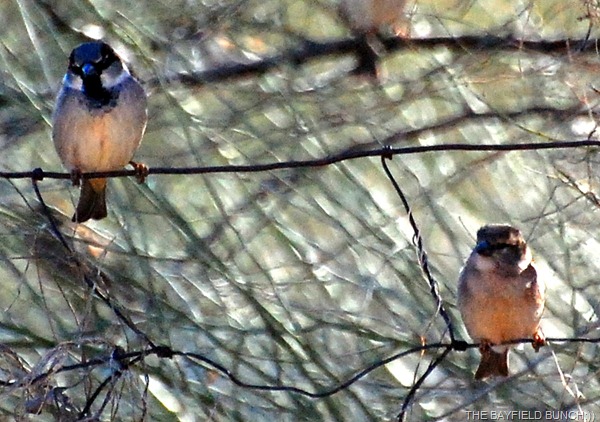 Wind picked up substantially in the afternoon, blowing from the north & threatening to dump us out of our lounge chairs in the back yard Tuesday afternoon. We held our ground, soaked up the warming rays of an afternoon sun, & thumbed our noses at what we know to be some of the last gasps of Old Man Winter in these parts!! 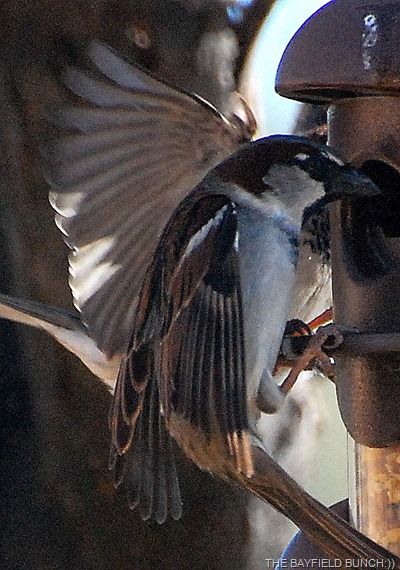 Know what…..I probably got more porridge on my housecoat than what Quaker has oats in their warehouse.  I don’t remember dribbling food all over myself years ago but somewhere along the line something has changed.  My end of the table after every meal is a wreck.  Looks like a couple hungry Hippos had themselves a perilous food fight.  And when I go & sit in my recliner after supper it’s no wonder Pheebs jumps up on my lap.  It’s not me she’s interested in, she just wants to lick my splattered shirt!! 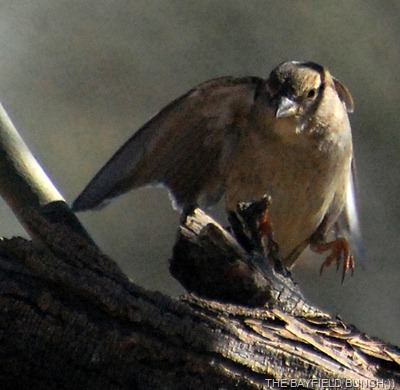 In Tuesday’s post I included a link to Sandra & Gordon’s blog about Sandra being denied access to the United States a few years ago.  Today, Sandra posted about the day they were stopped at the border in, THE DAY FROM HELL. 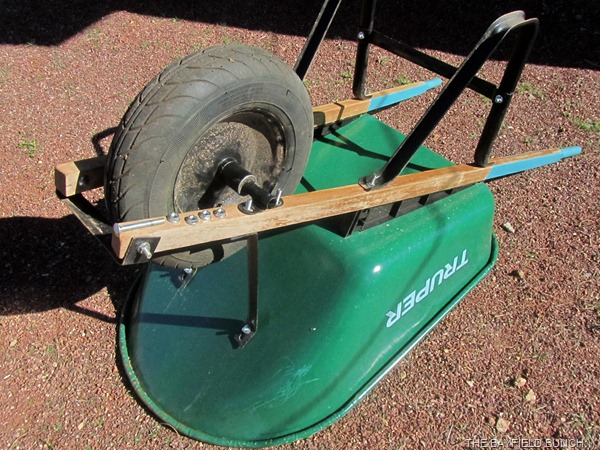 HAD A BIG OPERATION GOING ON HERE TODAY…PUTTING THE TIRE BACK ON THE WHEELBARROW:((

On her way back from the Post Office this morning, Kelly stopped & picked up our repaired & previously flat wheelbarrow tire.  It was up to me to put it back on the wheelbarrow.  Wondered what my chances of doing that were.  Sometimes I absolutely amaze myself by doing something right & this morning I did just that.  Truly out did myself by getting that tire back on the wheelbarrow correctly.  Tire guy said there were two reason for that tire being flat.  First, cheap wheelbarrow tires are so thin you can nearly spit through them, & second…..Goat Head stickers!!  Said the tire had a number of stickers in it.  He put in a new tube & filled it with green slime.  So, with that tire back on the Barrow I was back in the wheelbarrow business again.  Moved about a dozen loads over to our driveway.  No flats & the tire just kept going round & round & round so figured I’d done good putting it back on.  But then I heard, squeak, squeak, squeak.  Squeak, squeak, squeak is not as good as round & round & round.  Awwww nuts!!!!  Nothing serious, just a few adjustments, & I was ready to start wheeling again. 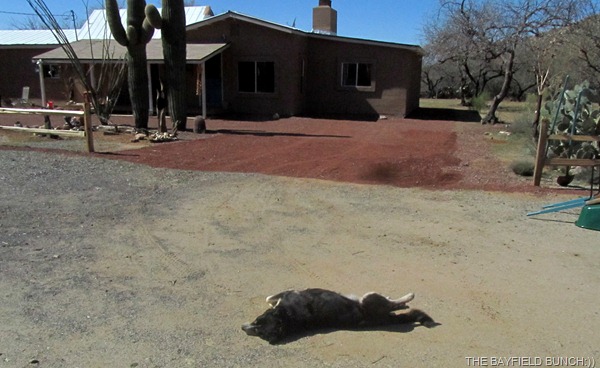 CAN’T ALWAYS COUNT ON MY MAIN RANCH HAND SOME DAYS

34F in Bayfield this morning & 36F in Congress.  We didn’t bother filling up the propane tank for our Legacy Blue Flame heater yesterday & it was so cold in the house this morning I thought it was going to snow.  And, about that propane heater….Some folks had a few questions about leaving a window open when using it.  That is recommended.  When using the heater in our Damon Motorhome the past 5 years we always opened one of the windows a crack every night.  Usually the kitchen window.  Never ever had any kind of a problem.  In the house now we have the heater hooked up to a 20 pound propane tank which we set inside our fireplace.  Our house is drafty enough not to open any windows & any leakages would be sucked up the chimney.  And no, we do not have fires in the fireplace while the propane tank is sitting there.  Wouldn’t be enough weenies & marshmallows in all of Congress to sit around that resulting explosion & fire……………:)) 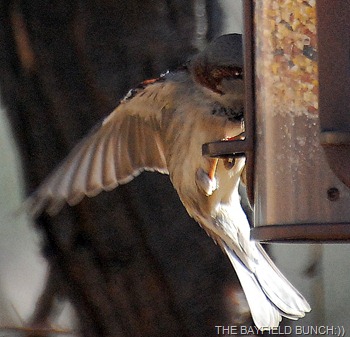 Nice surprise this afternoon when long time blog readers Bob & Laurie dropped by with their Basset Hound Lucy to say Hello.  Bob’s a retired police officer from Minnesota.  Nice folks & you can catch them at THE FRITZ ADVENTURES.  Had themselves a great desert Jeep tour out of Wickenburg Tuesday.   Met up with a real gold diggin prospector too.  Nice folks & they sure do like Arizona.  Always nice for Bloggers when a reader stops by & says, “thanks for writing your blog, you have been an inspiration to us”.  And, my thanks to you guys, Laurie & Bob, it’s people like you who are ‘my inspiration’ for writing the blog:)) 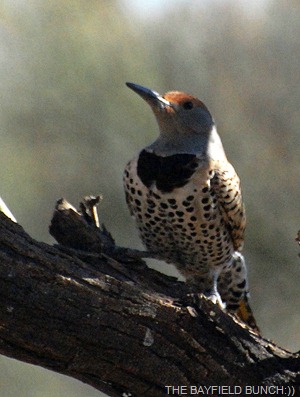 I’M GUESSING THIS FELLOW AS A ‘NORTHERN FLICKER >>>

Kelly slipped into Wickenburg this afternoon for some groceries & a hair appointment.  I slipped into my recliner for some zzzzzzzzz’s.  And Pheebs?  Well, she was just being her usual little Pheeber self:))

GROANER’S CORNER:((   A veterinarian was out with his four-year-old daughter. He had left his stethoscope on the car seat, and the little girl picked it up and began playing with it. Oh, wow, he thought, my daughter wants to follow in my footsteps!   Then the child spoke into the instrument: "Welcome to McDonald's. Do you want fries with that?"