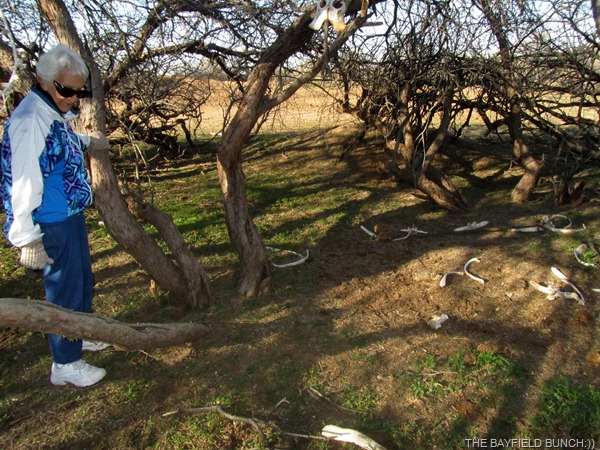 COMING ACROSS SOME OLD BONES ON OUR MORNING WALK

We walked out a little further into the desert this morning to show Aunt Jean a watering hole used by the range cattle.  Always interested to see all the bones scattered about & speculate how the owners of those old bones met their demise. 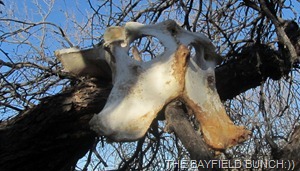 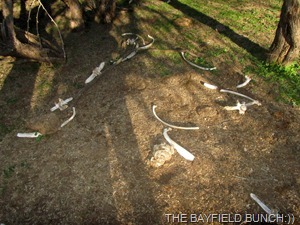 Friends John & Jackie, in the process of moving from Elfrida Arizona to Congress, were up for the week-end & emailed us to drop by.  So, we did.  Wanted Aunt Jean to see the nice house they have at the south end of Congress facing the Weaver Mountains. 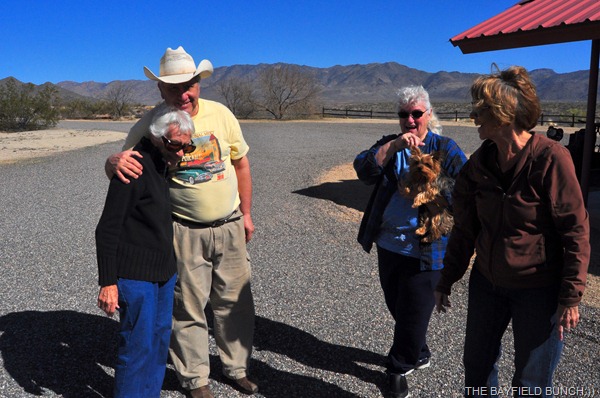 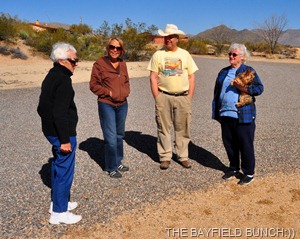 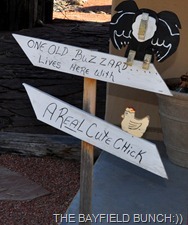 From John & Jackies we headed ourselves in a northeast direction making Jeep tracks for STANTON.  Wanted to show Jean the remnants of an old ghost town & how it has evolved into a popular gold prospecting center for many RVing folks.  Road was a bit washboardy getting there but smoothed out closer to Stanton itself.  Did us a drive through looking at the few old buildings.  Some folks outside their rigs washing gravel & panning for gold brought in from the hillsides on their ATV’s & 4 wheelers earlier in the day.

A beautiful Arizona morning for a drive along the old Stage Coach Road winding it’s way up the side of the Weaver Mountains.  Noticed how much greener things were than just a few weeks ago when we last drove that road with Kelly’s brother, Peter, & wife Leslie. 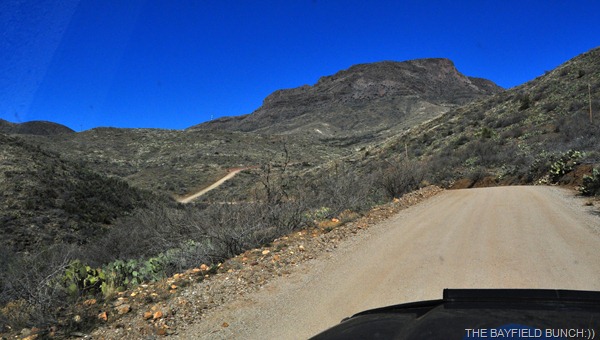 Antelope Creek had a small trickle of water running across the road as we angled ourselves down a gulley into it & stopped.  With the front & back Jeep tires traversing the creek, I shut the engine off.  We rolled the windows down & listened to the water trickling over the rocks beneath the Jeep.  The babbling brook & sounds of busy bees buzzing nearby gave me a feeling of early Spring. 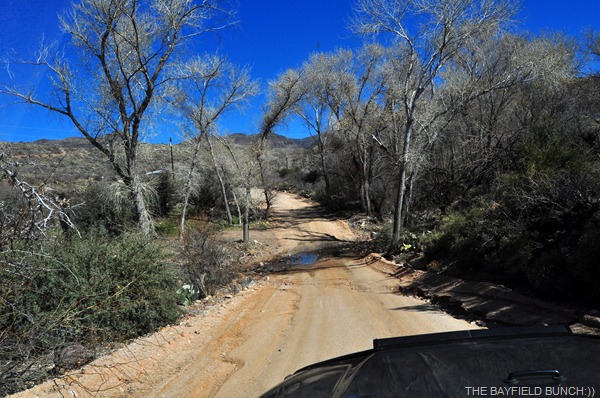 EASED OURSELVES DOWN INTO THE CREEK AND….. 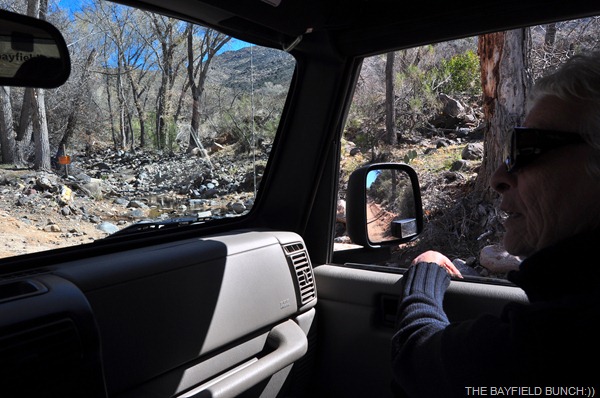 Continuing along the dusty narrow road we eventually made our way around a few tight curves, over a few ruts & bumps & past a half dozen steep drop-offs.  About 25 minutes after leaving Stanton we rolled into Yarnell through the back door. 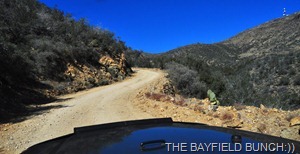 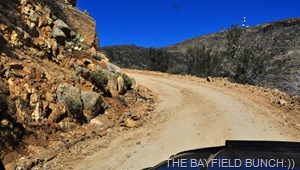 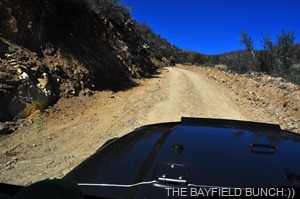 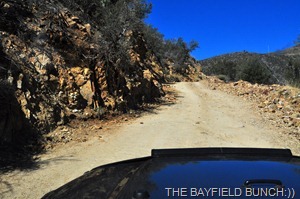 Reaching highway 89 we hung a left & began our descent down the Yarnell hill into the Sonoran desert below.  Quick stop at a viewpoint had Jean & out of the Jeep scanning the far reaching vista before us.  A slight haze hung in the distant mountains on the horizon.  Back in the Jeep, we pointed the nose downhill & let the winding highway sweep us all the way to the bottom spilling us out onto the valley floor just a mile or two north of Congress.  Less than 10 minutes later we rolled into our driveway.  Mission accomplished. 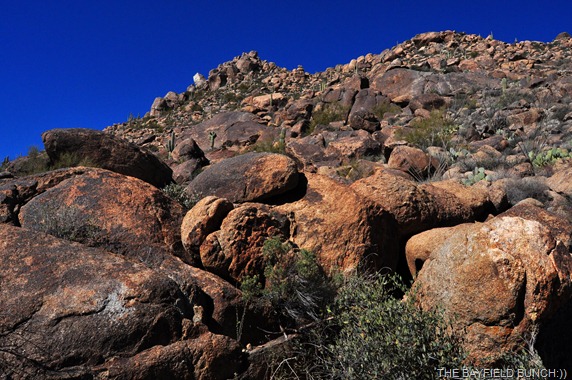 Comment & question in our Shout Box Sunday said…’Just want to let you know that your Aunt Jean is such an inspiration! To be so fit and active @ 85 is awesome! I wonder if she has any fitness and health philosophy to share’?  My answer to that question in the Shout Box was, ‘Golf’.  Jean elaborated a bit more this morning by saying, ‘keep moving’.  And, for Aunt Jean this has been one of the keys.  Aside from golfing as often as she can, Jean walks about half an hour each & every morning at sunrise.  She has a route she follows through the neighborhood streets where she lives.  Did I say, ‘every morning,’  She has been doing this for years & back in the late nineties I was fortunate enough to walk this route with her.  I had flown down to Florida to see her for a week.  Our morning desert walks here in Congress are about half an hour as well.  I think this morning we were out & about for about 3/4 of an hour.  Jean lives on her own & does all her own cooking & cleaning.  She’s a computer person, drives her own car anywhere she wants to go & also helps with the yard maintenance around her ground floor condo.  A very self sufficient independent lady indeed. 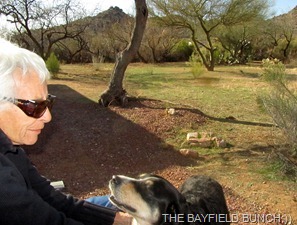 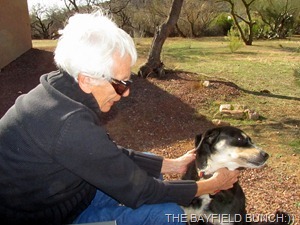 Each night Pheebs & I head out to the little rig it’s a bit chilly in there. Pheebs right away jumps up on my bed & warms my spot up for me until I later climb into bed.  She then moves down to the foot of the bed in the corner, whereupon she sleeps on my shirt:)) 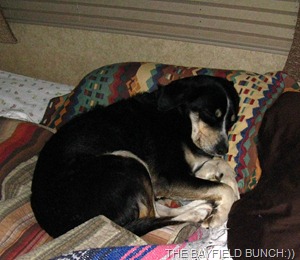 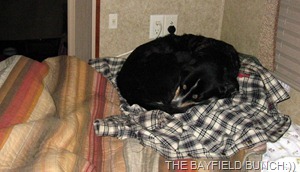 NOW, HOW NICE IS THAT FOR A FURRY LITTLE BED WARMER

I had never heard of a Maine Coon Cat before.  That is, until I read Chinle’s post at the SPOTTED DOG RANCH.  She’s got herself quite a family of critters over there…..including Rowdy:)) 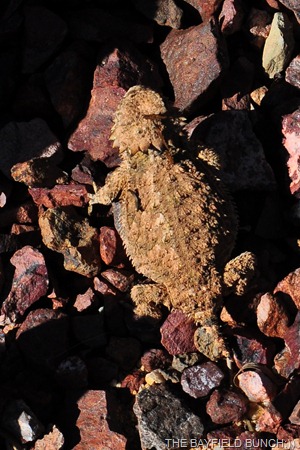 We finished off our day with a campfire after supper.  Reminded us all the campfires we used to have at the old farm house where Kelly & I lived about 15 years ago.  We couldn’t help but think of the friends & family who attended those campfire star parties who are no longer with us.  With a half moon high overhead we watched the first evening stars beginning to appear out of a darkening sky.  Yep, we sure are going to miss Aunt Jean after she leaves this Saturday morning:(( 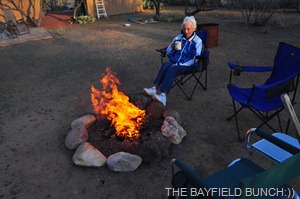 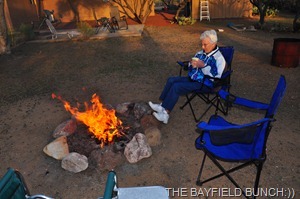 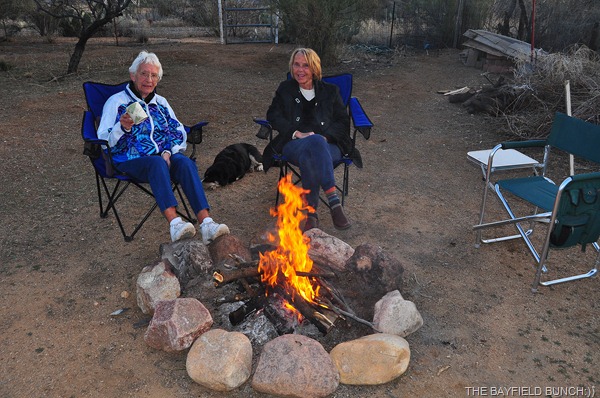 GROANER’S CORNER:((  An avid golfer was late coming home from his weekly game. As he dragged himself wearily through the door, his worried wife met him. "Honey," she said, "How was your game? Why are you so late?"
"Well," he replied, "this had to be the worst, hardest game of my life. Jack died out there on the golf course. Just had a heart attack and then died."
"Oh, no!" she cried. "How awful for you! He was your best friend! No wonder you are late....."
"Yes, the ordeal really wore me out.," he said, "the whole rest of the game it was hit the ball, drag Jack, hit the ball, drag Jack......"