IT WAS A VULTURE PEAK/WICKENBURG KIND OF DAY…… 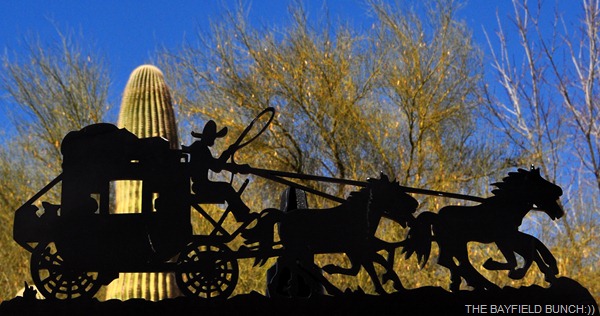 We have been very fortunate with the nice weather these past few days but it sounds like we are headed back into the weather dumpster again about mid week.  Figured we had better get all our outside ventures under our belts before we are once again driven inside by cold cloudy skies:(( 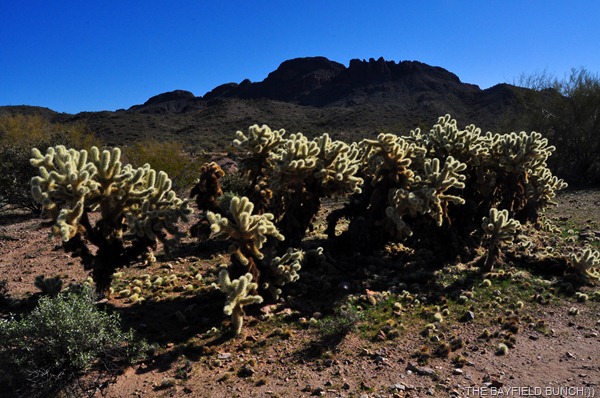 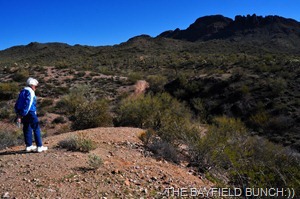 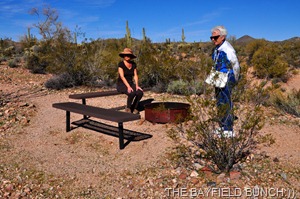 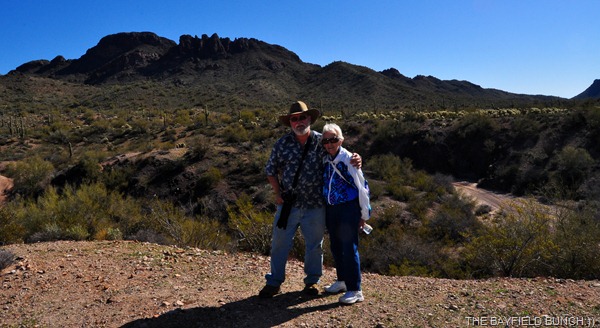 After another nice morning desert walk we were off in the Jeep again with our first destination being Vulture Peak just west of Wickenburg.  Because of the nasty Teddy Bear Chollas there we didn’t take the Pheebs this time.  We knew the trail was too rough for Jean but it was those prickly Chollas we wanted her to see.  First few hundred yards of the the Vulture Peak trail lead through a Cholla garden before descending steeply into a wash so we concentrated our walk to this flat path area. 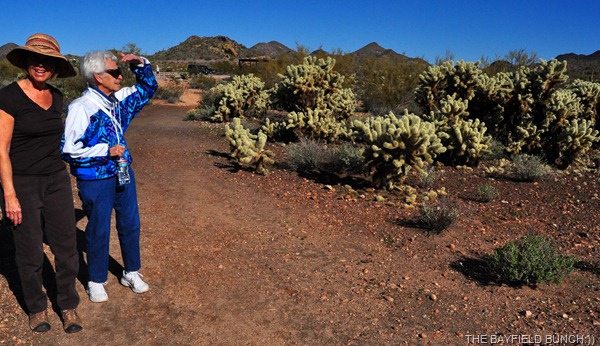 Fair number of people on the trail.  It was Saturday so a lot of city folks are up into the Wickenburg area for the weekend.  Despite the hikers, it was blissfully quiet in the desert with panoramic views in all directions.  Distant hazy blue mountains blended into the serenity known as the Sonoran desert.  Just another one of those mighty fine Arizona mornings…………….. 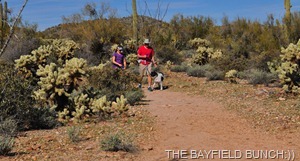 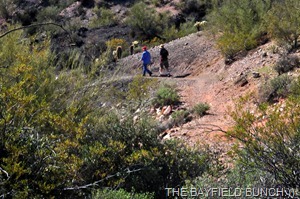 On our way east back to Wickenburg we pulled into the LOS CABALLEROS GOLF CLUB & toured ourselves around a bit.  Aunt Jean is an avid golfer who still likes to get out at least once a week on her favorite Sarasota golf course.  We figured she might be feeling a little homesick for some putting greens, tee-off times, long fairways, sand traps, Alligators, & water hazards.  She was on the edge of her seat as we slowly drove around looking at all the nice landscaping & super smooth green grass.  I think she was getting the ‘golf itch’ as we passed a few duffers making their way down a fairway on their golf cart. 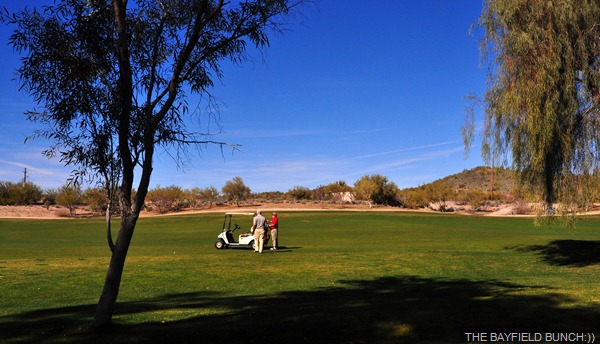 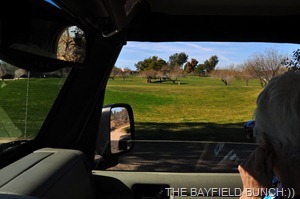 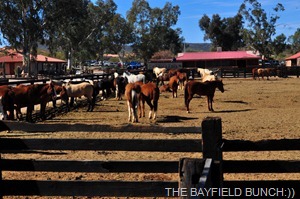 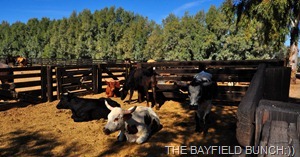 It was only a few miles into Wickenburg & we were soon downtown & had the Jeep parked.  Short walk in the warm Arizona sun soon had us seated at Anita’s Concina.  Shredded beef Tacos made their way to our table along with some Mexican dish for Kelly that had a name something like Armadillo.  I think it was Quesedilla.  Kelly said it tasted really darn good anyway…….whatever it was. 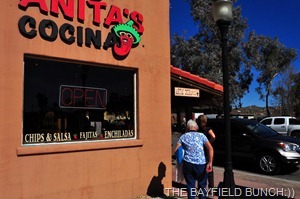 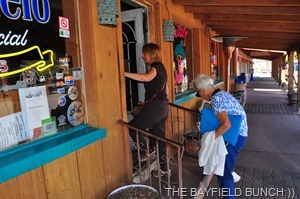 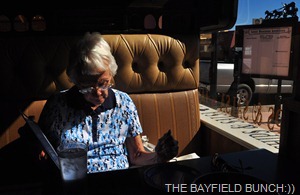 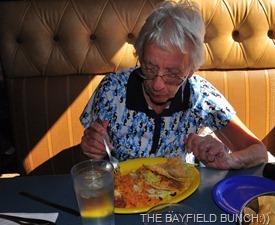 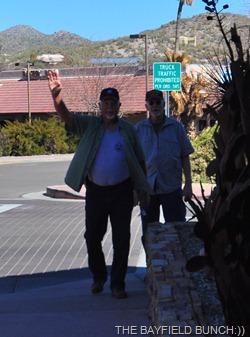 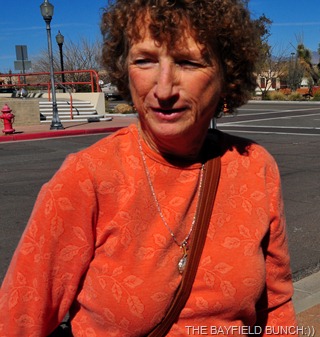 I have two best friends back home in Canada. One lives in Stratford about an hours drive away. We meet in a coffee shop a couple times a year & I probably haven’t been to Jim’s house in well over 20 years. The other fellow lives just a stone’s throw across the road from me. We get out on some great coffee tours but I haven’t been to Richard’s house in about 4 years. Yep, I am probably the world’s worst guy for visiting people alrigh 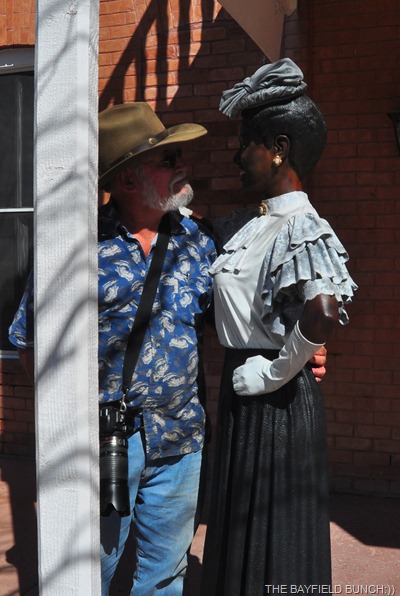 Aunt Jean was beginning to tire so we headed for the Jeep with a brief stop at a home made ice cream shop.  Small Chocolate, Maple Walnut, & Amaretto cones did it for all three of us.  We were back in Congress by 2 p.m.  No sooner got out of the Jeep when a car pulled in wondering if we had sold our Motorhome yet.  Some days, if it doesn’t rain….it pours. 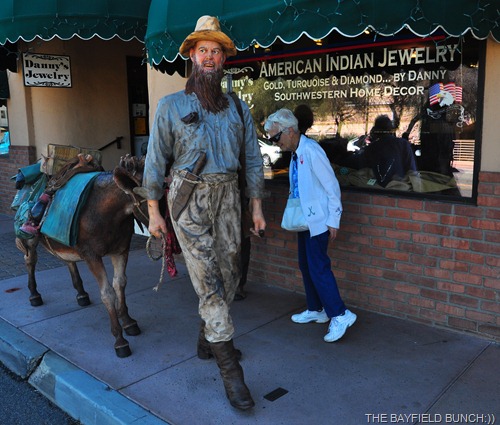 JEAN CHECKS OUT ONE OF THE LOCAL FELLAS 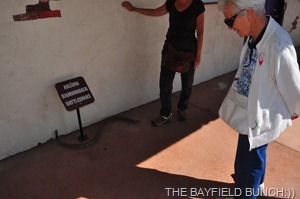 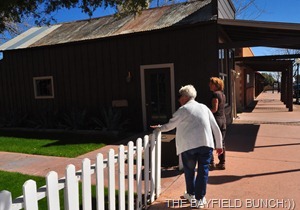 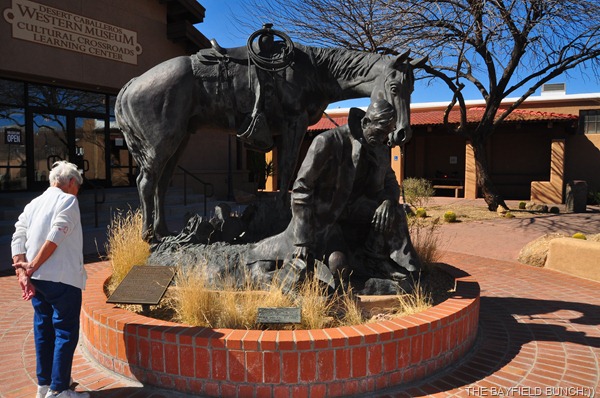 OUTSIDE THE DESERT CABALLEROS WESTERN MUSEUM

Rest of the day was quiet & anyone driving by our house would have seen a lot of zzzzzzzzzzzzz’s coming out the windows.  Even little doggy zzzzzzz’s. 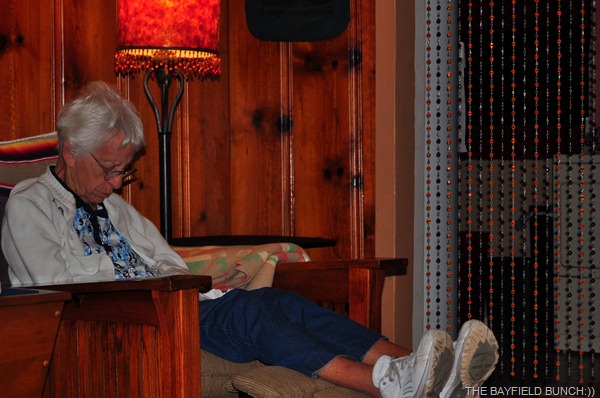 ALL & ALL, ANOTHER GREAT DAY SPENT WITH AUNT JEAN:))

GROANER’S CORNER:)) Granny was visiting town for the first time. She checks in at the hotel, and the bellboy takes her bags. She follows the boy, and as the door closes, she looks around and shakes her fist at him.
"Young man, I may be old, and straight from the hills, but that don't mean I'm stupid! I paid good money, and this room won't do at all! It's too small, and without a proper window! Why there's not even a bed!"
The bellhop looks at her and says, "Ma'am, this isn't your room, it's the elevator."