I WILL TURN MINE DOWN IF YOU WILL TURN YOURS DOWN…….

A strong cold wind blowing from the north was enough to yank our front screen door from my hand this morning.  Didn’t bother Pheebs though, she was out the door like a rocket ship chasing a bunny across the yard.  She never comes close to catching them but I like seeing her excitement & energy. 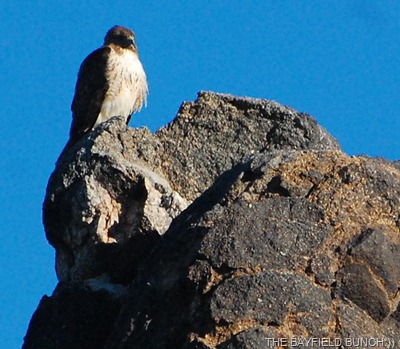 Aunt Jean just got out of Dodge in time.  Strong gusting icy winds kept us house bound like a couple chilled Zombies all day.  Heaters going full tilt.  Dashed out the front door to take a quick pic of the house for tonight’s post & dashed right back inside again.  Even our 2 big Saguaros were teetering & shivering in the wind.

I was tempted to make my way out the driveway & hang a ‘For Sale’ sign on the fence, except it probably would have been instantly blown away.  Warm Florida sunshine seemed like a good option today & we know there are cheap properties there.  But, whoaaaaa back there Pardner.  Give yer head a shake!!  Only thing I hate worse than cold weather, is hot muggy weather, so I had better get that thought  cleared out of my head right quick.  But, let’s face it…..anywhere is better than being stuck in miserable cold & snow infested northern winter climates like back home for months on end.  Anywhere!!

Despite the differences in location, our nightly routines seldom differ.  At home in Bayfield, Kelly watches TV in the living room while I am at work on my blog & listening to my music in the sunroom.  Distance between these 2 rooms is far enough not to have the sound from one room bother the other.  Not so here in Congress.  We are in adjoining rooms.  Me with my Sirius satellite ambient music & Kelly with her television sounds.  Sometimes it seems I can’t here my music as well because of louder TV noise in the next room.  Kelly has the same problem with  louder music sounds in my room.  With each one of us nudging our sound up a tad, it has become quite a dilemma.  Neither one is edging the sound up to drown out the other, it’s just a matter of trying to hear one’s own sounds better.  Oh dear, it is such a dilemma we sometimes have with ourselves.

OUR NEIGHBOR HAS QUITE A GROWING FAMILY OF SHEEP 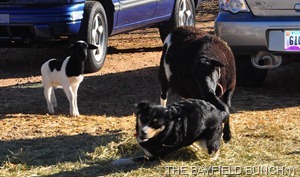 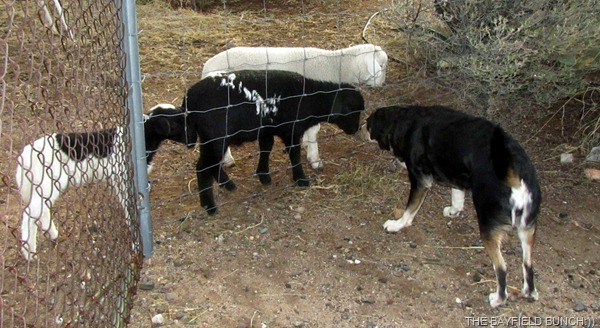 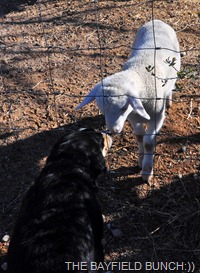 The days are slipping by faster now & in another month we will be in the early stages of getting organized for our trip back to Bayfield Ontario.  Not as much free RV storage space going back as we came with so we’ll be carefully making decisions as to what stays & what goes.  Our electronics & any valuables will go with us, but I might leave behind some socks & underwear just so any possible robbers will not feel jilted when they don’t find anything of value here. 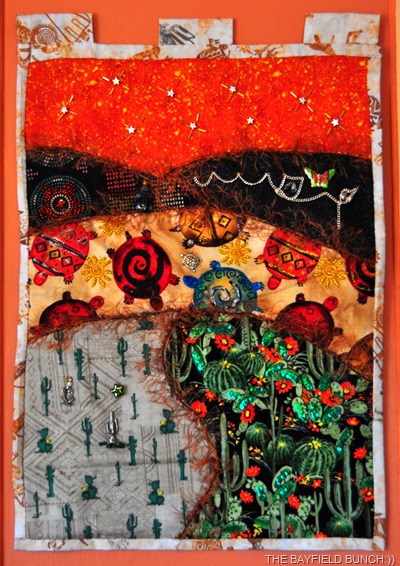 AND A BIG THANK YOU TO DIANNE FOR MAKING THIS BEAUTIFUL HAND MADE SOUTHWEST WALL HANGING FOR OUR HOUSE…DIANNE & HARRY OWN STORMRUNNER RV SALES & SERVICE IN BAYFIELD, ONTARIO:))

My right leg is still improving but I’m not out of the woods yet.  I am able to walk pain free again & have not had to take any pain meds for nearly a month.   Have to be careful of any unusual turns or twists though because I can still get a short sharp jabbing pain in my upper right leg groin area.  Hardest thing on my right leg is getting in & out of the Jeep.  Especially getting out.  That one hurts me every time.  Might have to trade my Motorcycle in for a Scooter when we get home so I do not have to swing my leg over the seat.  Guess maybe I could always ride side saddle…..and carry a purse:(( 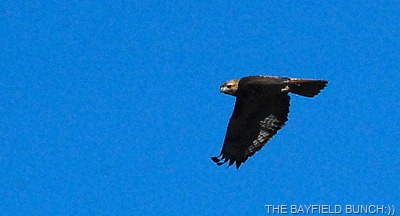 Thought the comments were interesting about that frosted object on the dash of that 55 Chevy Bel Air convertible in Saturday night’s post. (I had mis-identified it as a Corvette at first)  Never would have guessed it had anything to do with traffic lights or diffusing oncoming lights.  I do not recall ever seeing one years ago.  Of course, we never had any traffic lights in the small southern Ontario town I lived in at the time either.

No matter which way you slice it, getting into or out of the top bunk in a Class C can be difficult. Ladders are generally used & we do have a heavy duty well built metal ladder. However, the rungs are narrow & hard on bare or sock feet. Tried it a couple times & that was enough of that. Easier to step up on the back of the dinette to climb into the bunk. A commenter suggested widening the steps & if we replace the dinette at some point, that is probably what we will have to do. If I don’t lose some weight soon I may have to look into the possibility of installing a hydraulic lift:(( 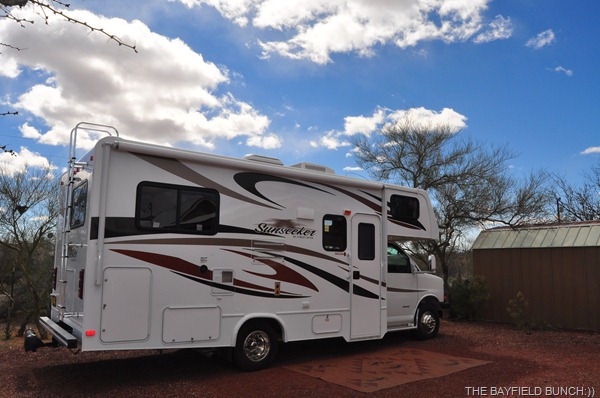 Some readers may remember it was a year ago at this time Pheebs was doing all that cow smooching.  We were boondocked just south of Congress Arizona. 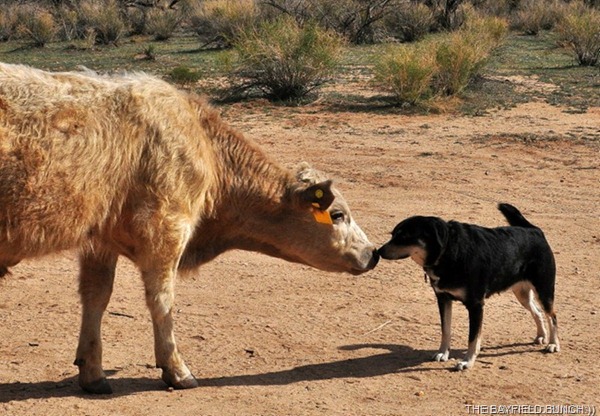 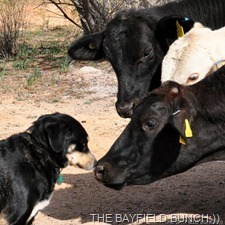 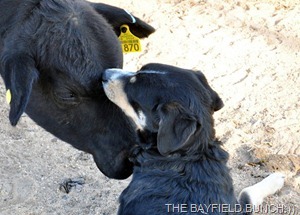 And, it was just one year ago Saturday (23rd) that we first stumbled upon our little rough & tumble house on Ghost Town Road.  Here’s what I wrote in my blog at the end of that day…… “We are always on the lookout for a little piece of property with 3 or 4 acres & a house on it so Kelly had spotted one for us to look at. No big acreage but the house was listed as quietly private so we found it on Old Ghost Town Road & had a look at it. Even had 3 Saguaros out front. Could be had for low to mid 30’s probably, but it was older, in need of repair, & just didn’t have the WOW factor going for it. And…..there were neighbors:(( Not so good!! Our search continues. Like I have said many times, whether RVing or living in a sticks & bricks, the only thing we want to see around us is the fine & undisturbed works of Mother Nature”. 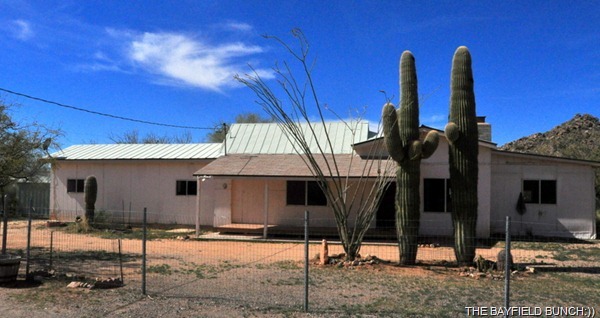 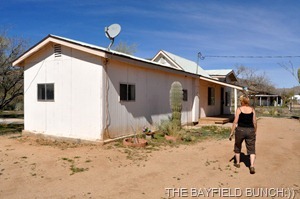 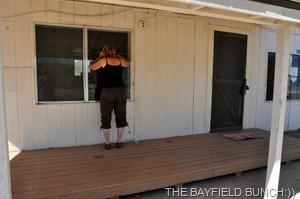 GROANER’S CORNER:((  A swimming instructor at a Los Angeles university was quizzing a group of students on Red Cross life saving and water safety techniques.
They answered all of her questions easily until she posed this one: "Which article of clothing would you remove last if you fell from a boat or dock fully clothed?"
Everyone mentioned something different. It was evident that no one knew the correct answer, so the instructor helped out. "The blouse," she said, "because the air gets under the blouse and acts like a buoy!"
The subsequent uproar ended the class.