A FINAL FAREWELL & IT WAS OFF TO THE NEAREST CHEVY DEALER………. 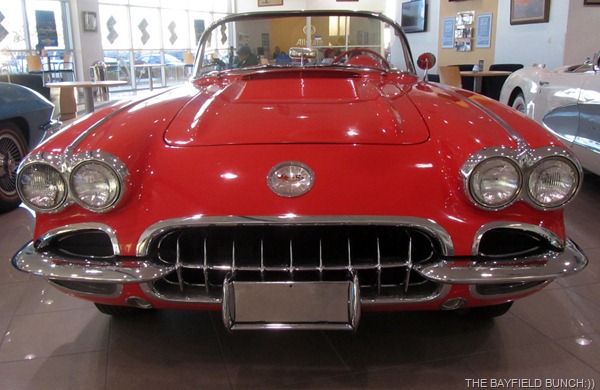 We were all up early this morning & on the move.  There was no sitting around in our PJ’s & housecoats leisurely drinking coffee & chit chatting.  Jean had her suitcase all packed, I skipped my shower & breakfast while Kelly took care of some early morning computer stuff.  Jean said a final goodbye to a little sad faced Pheeber doggy.  It was dark, & we were on the road by 5:35 a.m. 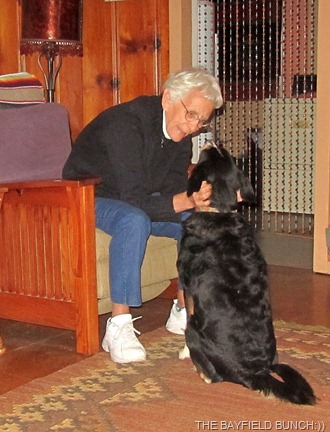 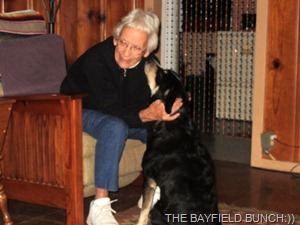 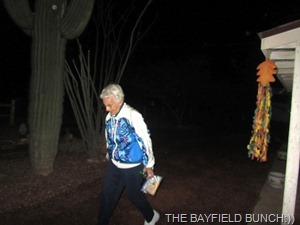 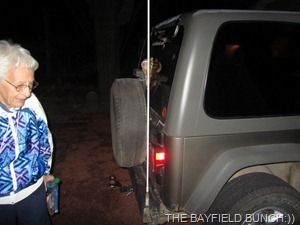 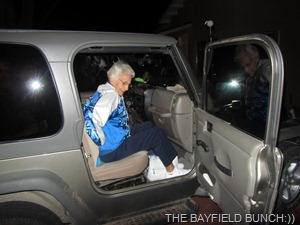 Not a lot of traffic all the way to Surprise Arizona.  Golden Corral didn’t have it’s lights on so I drove right by it.  We circled back through the Mallopollis maze of parking lots & found it no problem.  Again, it was sad sitting there watching the dawn break over a distant mountain range knowing we would be saying goodbye in a few minutes.  The shuttle van was right on time.  Suitcase out of the Jeep, a last hug before helping Jean into the van, a final wave, and she was gone………………….:(( 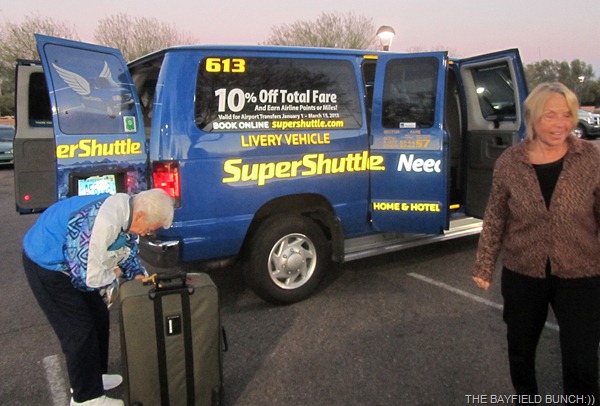 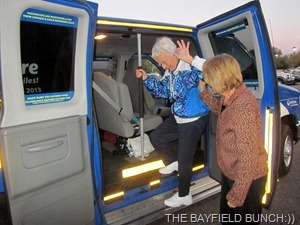 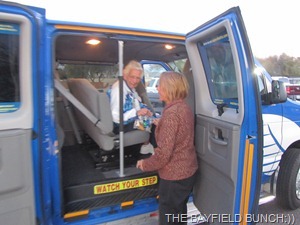 AND, THE BLUE SHUTTLE VAN HEADS FOR THE AIRPORT
Kelly & I drove away reflecting back on Jean’s visit & how much we enjoyed having her here.  But alas, it was time to move on & we had ourselves another immediate mission to take care of.  When we bought the Sunseeker, we only got one set of keys.  The Chevy key is a chip key so we had to have another one made at a GM dealership not too far from where we had dropped Jean off.  Only took us about 15 minutes to reach the western side of Surprise & pull into the SANDS CHEVROLET DEALERSHIP.  Wow!! 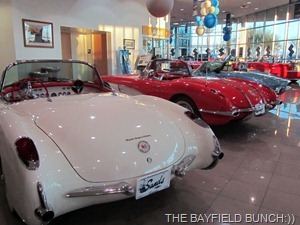 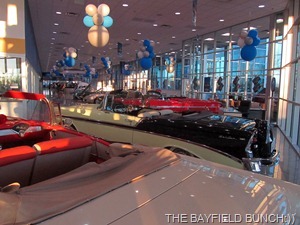 I’ve seen a few big fancy schmancy car dealerships before, but this one kinda took the cake.  First thing that caught my eye was the row of vintage Chevy Corvettes in the showroom.  The photos below will show the display better than I can describe it. 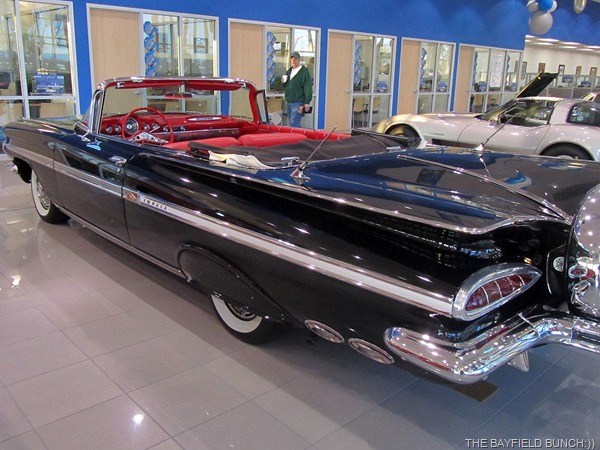 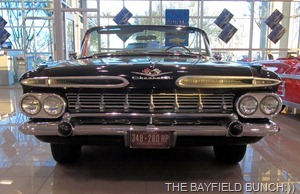 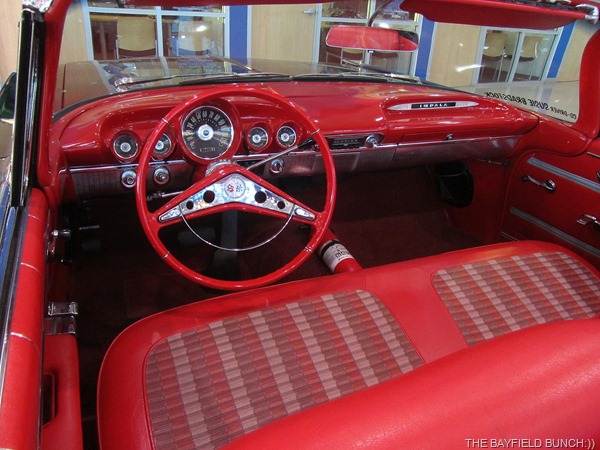 1959 CHEVY IMPALA
No problem getting a second key made &  Kelly had already checked our Chevy manual to see how we could program the key to our Sunseeker ourselves.   I think the key cost us around $30.  The waiting room had a lunch bar with fresh coffee brewing & 3 big boxes of fresh donuts.  I wasn’t long in getting my face into a sticky sugar coated lemon filled donut. 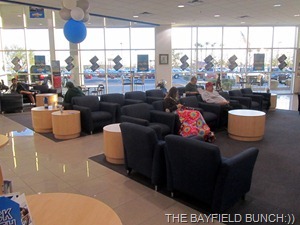 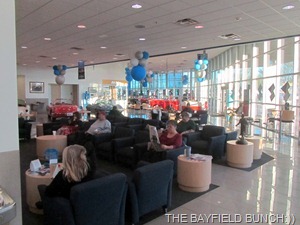 KELLY PAYS FOR THE NEW SUNSEEKER IGNITION KEY
Beautiful morning as we headed the short distance to a fairly new Walmart for a few groceries.  Dragged ourselves through an indoor McDonalds & hit the road for Congress.  Easy drive all the way back & we rolled into the driveway about 9 a.m.  Of course Pheebs came bounding out of the house right away running around looking for Aunty Jean. 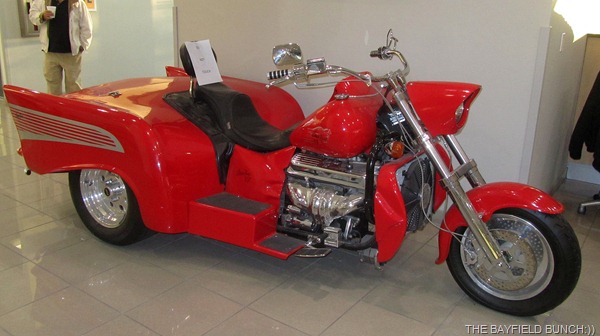 THIS V-8 ENGINED MOTORCYCLE IS FASHIONED AFTER A 1957 CHEVY 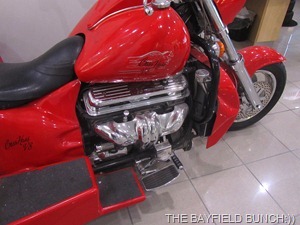 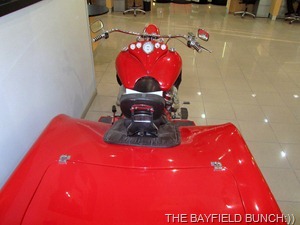 Kept ourselves busy for the rest of the morning.  I had the vacuum out sucking up dust bunnies while Kelly tackled a load of laundry.  I later got a load of laundry done as well.  Moved all my stuff out of the Sunseeker back into my room as we worked away at getting ourselves re-organized.  It was good for me to keep myself busy or I would have been feeling sad about Jean leaving. 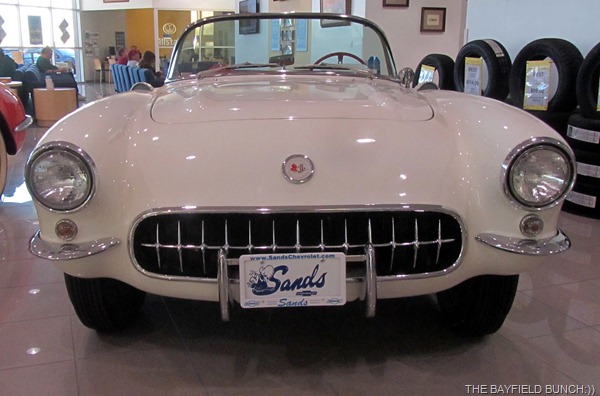 We are fortunate here at the house to have an outside RV sewer hook-up in our back yard.  Must have been put in by a former owner.  I simply drove the rig around to the back of the house later this morning & lined up with the in-ground sewer pipe.  It was the first time dumping the tanks on the Sunseeker & everything went off without a hitch.  Now, how handy is that, having an RV dump station in one’s own back yard.  This rig also has a backwash hookup for the black tank so I easily flushed it out using the hose/flush/spray system.  Nice feature. 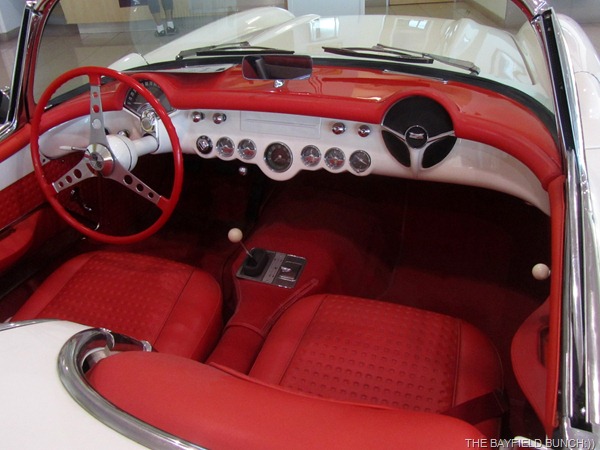 We spent a fair bit of time in the rig this afternoon discussing plans for the dinette area, organizing drawers, etc.  I also spent time with the radio re-tweaking the sound again & familiarizing myself with the iPod workings.  I can no longer rely on my memory to instantly retain things so it is repetition that works best for me.  If I do something over & over long enough, it has a better chance of sticking to my brain cells.  So, when I say I spent a fair bit of time with that touch screen computer Mossmagator of an entertainment center in the Sunseeker, I meant I did just that.  If I go out there in the morning, turn on the radio & can’t remember anything…….I’m gonna take a long walk of a short pier!!!! 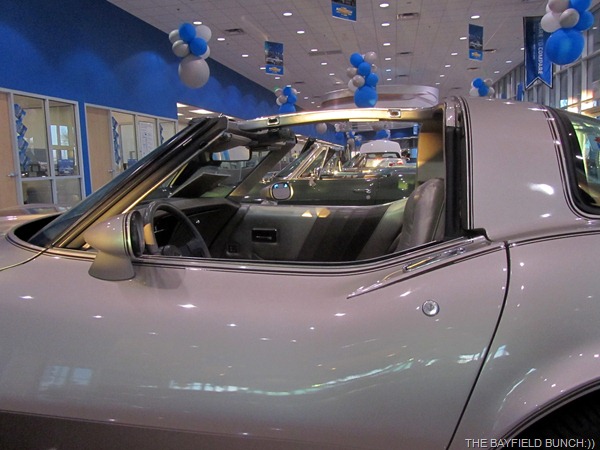 Following our Chevy manual instructions later this afternoon, we were successful in programming our new Sunseeker ignition key.  Kelly read the easy instructions & I did the very strenuous & somewhat hard physical task of turning the key to the correct positions at the correct times….as instructed of course:)) 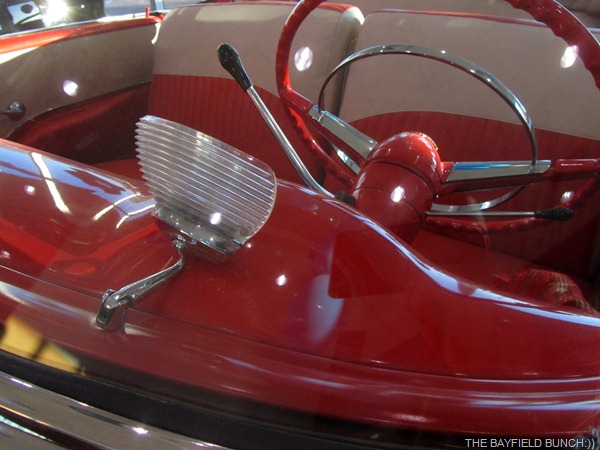 AM WONDERING IF ANYONE KNOWS WHAT THAT FROSTED GLASS OBJECT IS FASTENED TO THE DASH OF THIS OLDER CHEVY BELAIR
GROANER’S CORNER:((  After a long, dry sermon, the minister announced that he wished to meet with the board following the close of the service.
The first man to arrive and greet the minister was a total stranger. "You misunderstood my announcement. This is a meeting of the board members," explained the minister.
"I know," said the man, "but if there is anyone here more bored than I am, then I'd like to meet him..."
-------------------------------------------------------------
- Tourists see the world, travelers experience it.
- Home is where your pet is:))
- "If having a soul means being able to feel
love and loyalty and gratitude, then animals
are better off than a lot of humans."
(James Herriot)
- The pessimist complains about the wind; the optimist expects it to change; the realist adjusts the sails -William Arthur Ward
- The only thing better than right now will someday be the memories of right now...AL.
- It is not so much having nothing to do as it is not having the interest to do something....AL.
Posted by Al Bossence at 2/23/2013