WELL, SURPRISE SURPRISE WE WENT TO SURPRISE…SURPRISE ARIZONA THAT IS 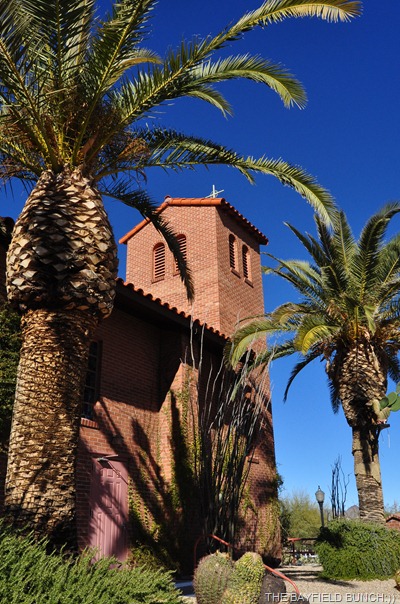 Still 63F when I took Pheebs out Tuesday night.  Nice, & with a large moon overhead the landscape was lit up beautifully.  And, good thing it was.  I heard a scuffling sound over by the neighbor’s fenced gate.  Quietly walked over to our fence line & in the moonlight saw several small dark objects walking around.  I suspected Javalina’s right away & I was right.  Turns out there were 5 adults & 2 babies.  Pheebe, behind me & over by the house, sensed the Javalina’s & came a running up beside me to the fence.  The Javalina’s sensed her too & dropped back except for one who came right towards us.  I could tell this fellow meant business.  I knew we were safe behind the new chain link fence so I didn’t turn & head for the house.  Pheebs of course didn’t understand the danger & her tail was wagging & she wanted to play.  She let out a yip & the Javalina made a short charge toward us & stopped.  It was obvious this fella was the enforcer & had I or Pheebe made a move toward him or the the others they would have attacked.  I threw my arms up in the air & made a big noise (no, not a passing gas noise) but the Javalina held it’s ground & was not phased.  This was a little unnerving because it told me that if we ran into a pack of Javalina’s sometime, they were not going to simply run away.  They would hold their ground & attack us if they felt threatened.  I am now thinking it might be wise for us to get ourselves some kind of artillery piece to carry on our desert walks, hikes, & Jeep ventures…..just in case. 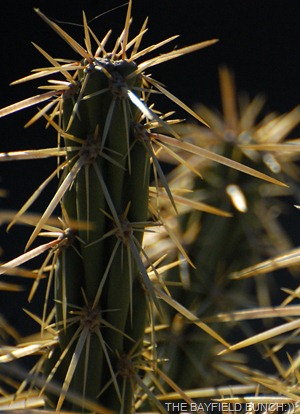 My annoying insomnia dilemma had me up at 3 a.m. again for the second night in a row. No problem getting to sleep, but big problem staying asleep. Determined not to go back on the sleeping pills again, but slipping into a Zombie like state by mid afternoon is not acceptable either. Not very productive in the old energy department that’s for sure:(( 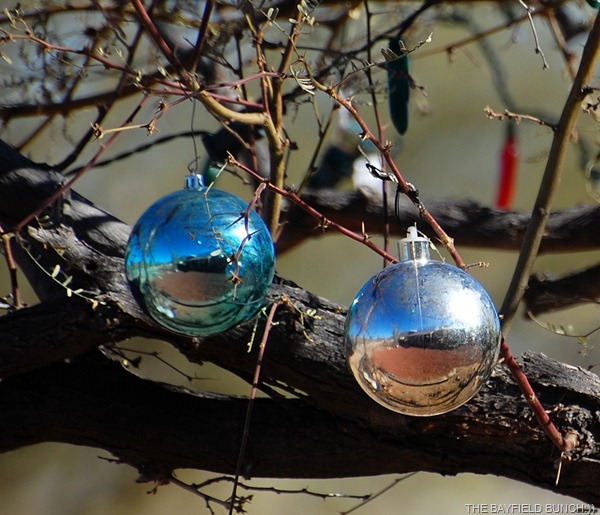 STILL A FEW CHRISTMAS DECORATIONS IN OUR MESQUITE TREE

Surprise is the name of a city about 35 miles south of Wickenburg Arizona & fairly close to the northwest end of Phoenix.  We had never been further south of Wickenburg than just 3 or 4 miles so today was the day to explore some new territory.  Kelly had spotted an RV dealer there on-line who had a couple of the Class B+ RV’s that we have been discussing.  Figured it was a good excuse to drive to Surprise & see first hand what they looked like.  Also wanted to check out the Golden Corral location in case my Aunt Jean makes it here next month.  No, not to eat.  This is where we would meet the shuttle van from Phoenix Airport with Jean on board.  Kelly & I learned a long time ago to stay out of those Buffet/Smorgasbord places like Golden Corral.  We just do too much damage to ourselves in those ‘all you can eat’ places!! 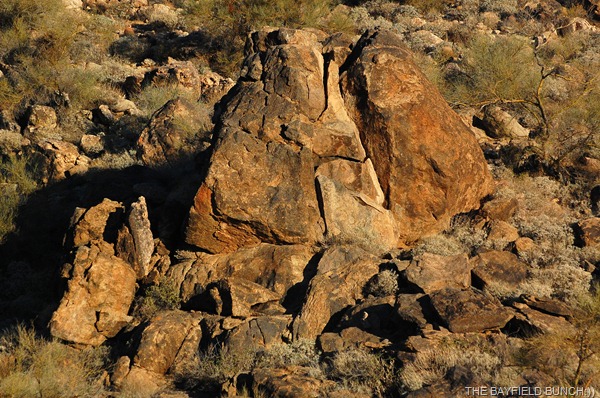 SOME DAYS I JUST ENJOY LOOKING AT GOOD OLD ROCKS

We were on the road & headed south by 8:30 this morning.  Pheebs stayed behind to hold the Fort down.  Once we turned off 2 lane highway 89 & headed south to Wickenburg it was a 4 lane flat speedy drive all the way to Surprise.  Light traffic & a nice warm slightly cloudy morning for a drive. 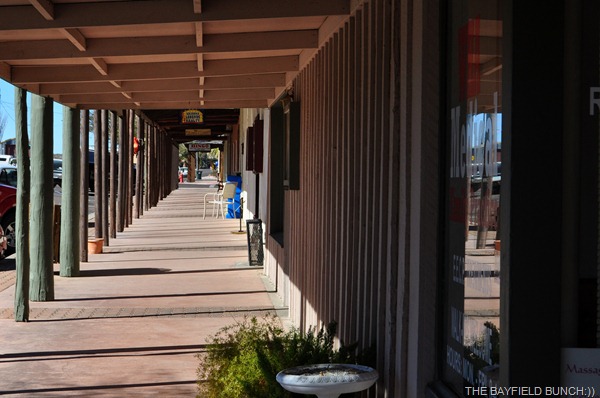 Surprise is one huge Malloppolis.  For shopaholics, this is Mecca.  It is simply one giant mall complex after giant mall complex & just about any store imaginable is probably here.  Acres & acres of pavement, mega stores, huge parking lots, traffic lights, lots of traffic & the usual hordes of humanoids everywhere.  Ain’t no place for country fellers that’s for sure. 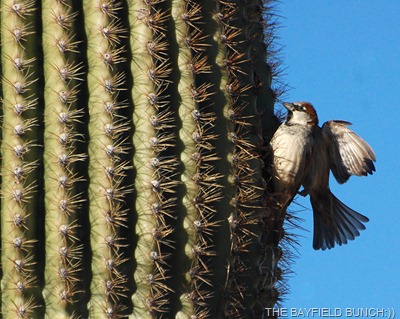 Our first destination was the ORANGEWOOD RV CENTER on Bell Road.  Didn’t take us long to get ourselves turned around, mixed up & semi lost in a few big mall parking lot areas.  Somehow relocated Bell Road & promptly headed off the wrong way.  Took us about half a dozen blocks to realize we were headed southwest when we should have been heading northeast.  Quick U-turn on the 6 lane traffic infested street (you can do that in a Jeep) & we were off like a herd of turkeys in a cloud of heifer dust heading the right direction.  Finally found Orangewood. 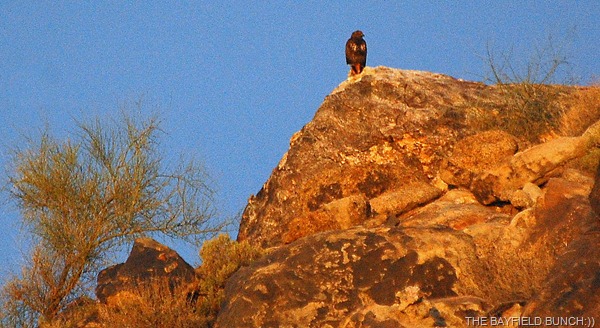 Why oh why oh why would anyone ever want to live in a city if they didn’t have to.  Lucky for me I do not suffer from Shopaphobia…… but not to worry, I am not going to launch into my usual ‘big city anti-shopping’ rant.  Let’s get back to the reason we were there. 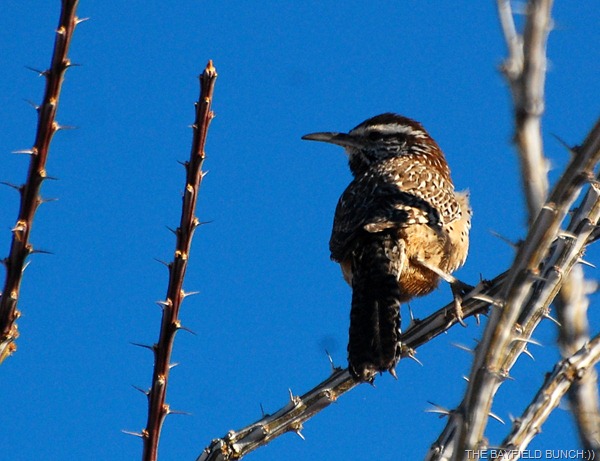 Met a nice fella at the Orangewood RV center by the name of Sonny.  I’m leery of salespeople for obvious reasons but I did feel Sonny was fair with his RV speak as we looked at 3 different rigs.  Felt he answered our questions honestly, showed patience, concern, & asked us all the right questions about ourselves. (see Tuesday’s post:))  We did look at a 2004 Lazy Daze that had a lot of character, quality, & homey appeal, but I think our search will continue.  Nice rig but just not quite what we had in mind.  Not really sure what we are looking for but we will know, if & when we find it:))  And Sonny, if you happened to look at that Bayfield Bunch card & are reading this, all the best with your back surgery in the morning. 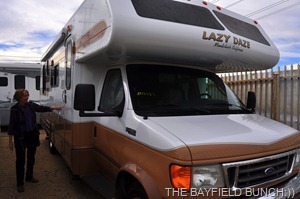 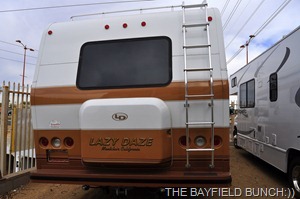 From the Orangewood RV Center we floundered our way back out into traffic looking for a hamburger joint Kelly had spotted on our way in.  A favorite burger place TIOGA GEORGE has talked about in his blog.  Half a dozen wrong turns later we finally found ourselves parked in front of FIVE GUYS BURGERS & FRIES.  It was high noon as we sat down with our stuff.  Good homemade burgs, good fresh cut fries & good prices.  We would go there again because Kelly really liked her burg:)) 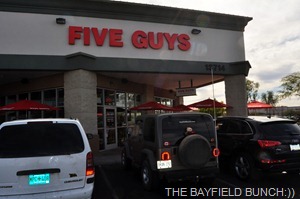 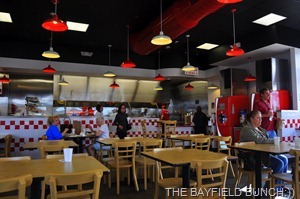 AND, THAT’S KELLY WAY OVER THERE IN THE CORNER GETTING SOME KETCHUP

From Five Guys it was a short walk to Starbucks.  Not my favorite coffee shop by a long shot but Kelly wanted a coffee so who was I to argue.  Don’t like their burnt tasting coffee & always thought their prices verged on the point of gouging.  With that said, I had a coffee as well, plus a donut.  The donut was nothing to write home about but the newer ‘Blonde’ brand coffee was at least better than the usual burnt Charbucks taste. 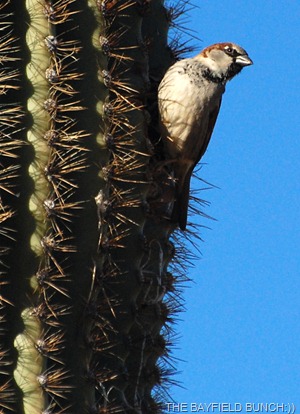 Walking back to the Jeep we spotted a Best Buy about half a mile away so had to get ourselves & the Jeep twisted & turned around again in one mall labyrinth after another to launch ourselves across a 6 lane highway into another Malloppolis on the other side of the road.  Flip & flopped our way through another 30 acre parking lot & finally spotted the Best Buy store.  We were curious to have us a look at the new Bose Solo sound system for improving the tin can sound of televisions.  Best Buy didn’t have any.  Just as well methinks. OUTSIDE AFTERNOON COFFEE AT CHARBUCKS

We almost made it back to the road heading home but ran into a Lowe’s store with a big sign saying, ‘Indoor Lumber Yard'.  Aw what the heck, lets look at the price of some fence lumber.  Checked out their greenhouse as well to see what the prices were for some Hopseed plants.  Ended up buying some light bulbs, hose washers, a bag of charcoal & some propane for the BBQ.  This time we were determined to get out of Surprise & make tracks for home.  And get out of Malloppolis we did. 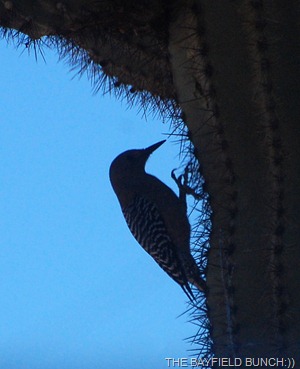 VIEW FROM MY COMPUTER CHAIR THROUGH THE BEDROOM WINDOW

Easy flat land drive back to Wickenburg where we stopped at Safeway for a few groceries.  $119.00 later we struggled our heavy grocery bags out to the Jeep & made a bee line for home where the fabulous Pheebs was patiently waiting for us. 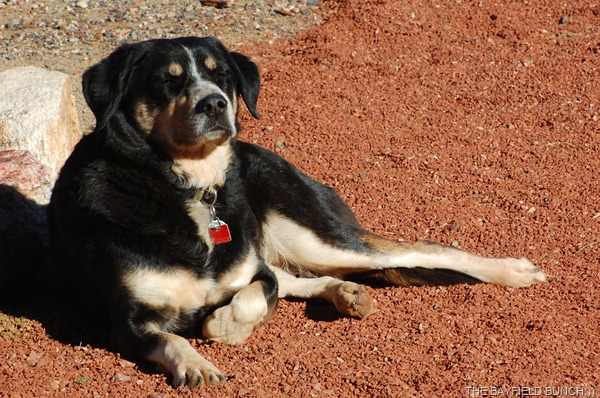 From time to time, readers have sent us some nice things over the past few blogging years.  Rose, over there in that Texas State recently sent us this original Mexican Serape for our southwest house.  She had originally bought it during her college years back in 1961.  It fits in so well here with our décor.  Very, very, much appreciated Rose:)) 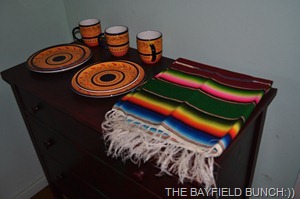 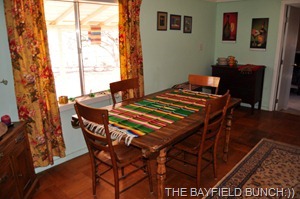 And thanks to SUFFICIENT GRACE FARM for identifying the Northern Mockingbird & Say’s Phoebe in Tuesday night’s post:)) 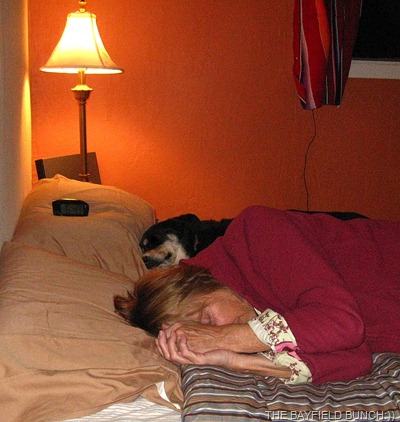 HEY, LOOKS LIKE MY BED IS GETTING TO BE A PRETTY POPULAR PLACE AROUND HERE

GROANER’S CORNER:))  Sound travels slowly.  Sometimes the things you say when your kids are teenagers don't reach them till they're in their 40s.