WE STUMBLED UPON ANOTHER OLD CEMETERY 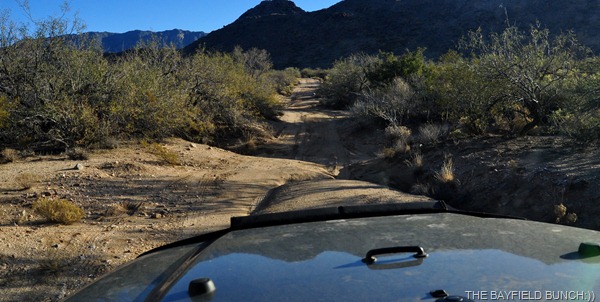 NICE MORNING FOR ANOTHER JEEP TUMBLE

Looking forward to warmer sunnier days with today being the start.  We have been in a cold spell for awhile with some cloudy gray days.  Going to have to scramble me up some outside projects in coming days for sure.

A FEW BUMPS ALONG THE WAY

A five minute drive from our house on Ghost Town Road takes us to a historic area.  It is the site of the old CONGRESS GOLD MINE. 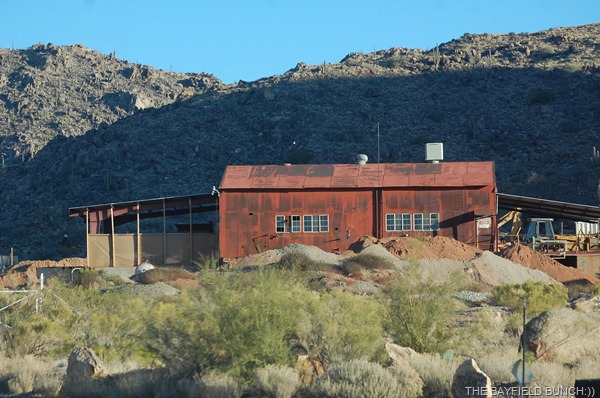 The original town site was built here next to the mine & this morning we stumbled upon the old town’s cemetery.  We had been to the other Congress cemetery a month ago but never knew about the original cemetery hidden about a quarter mile away amid the Cactus, Mesquite & Palo Verde trees.  We were just following an old road winding through the scrub when we spotted the cemetery gates. 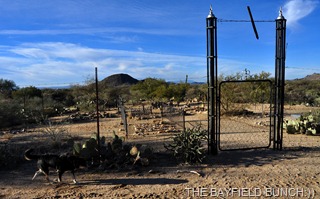 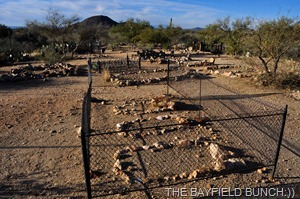 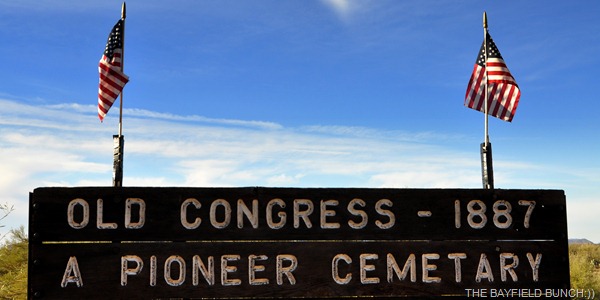 We often stop & walk through old cemeteries & this one was definitely old .  Noticed right away something unusual in this cemetery though & that was the size of many old graves.  Very small.  Most markers are long gone so we suspect a lot of children were buried here for whatever reason. 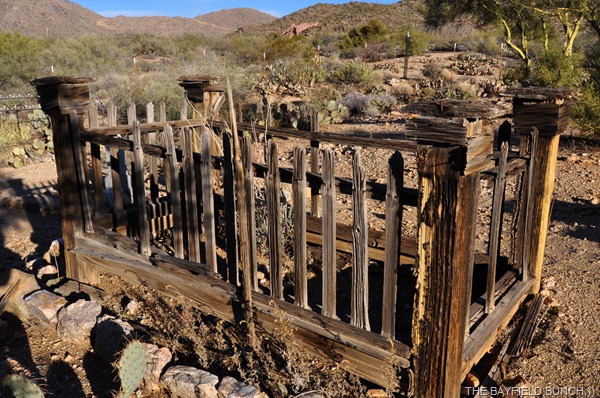 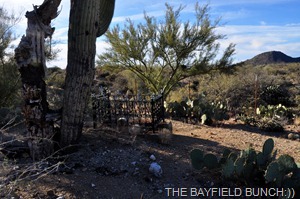 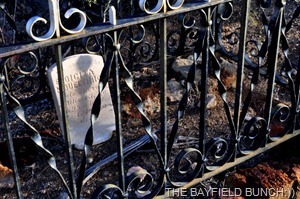 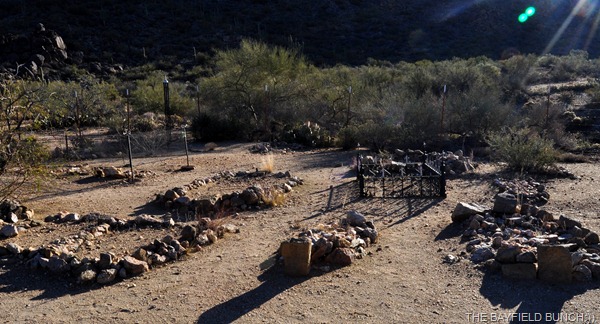 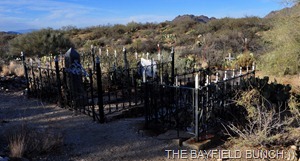 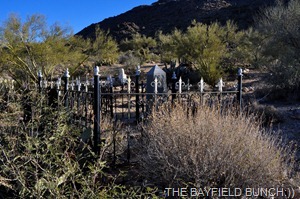 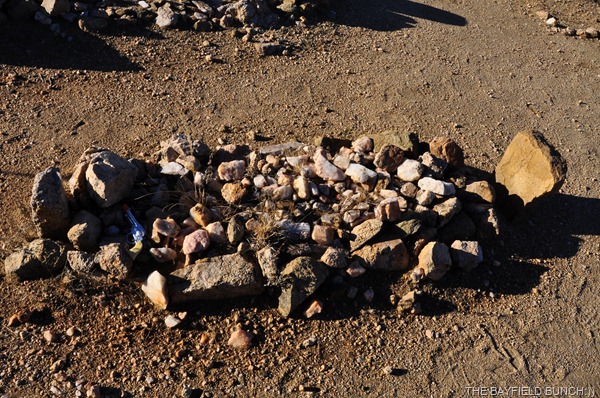 A TOY GUN LIES AT THE FOOT OF THIS OLD GRAVE

Because of the pottery shards, broken glass, rusted tins & bits of weathered lumber we also figure we found the original Congress town site on the north side of the cemetery.  No buildings left but the evidence is all over the ground.  Kelly later found some OLD CONGRESS info on the internet & the site we were at this morning was actually the Mill end of Congress.

Just as other original ghost towns we have come across, this site just put’s one’s imagination into overdrive trying to imagine what this all really looked like a hundred or more years ago.  Buildings, bustling streets, kids playing & miners in saloons.  Another old rough & tumble western mining town where justice was often meted out through the barrel of a gun.  This is a land where fact meets fiction & legends never die.  And, how fortunate we are to have found a house for sale last March right in the historic middle of it all. 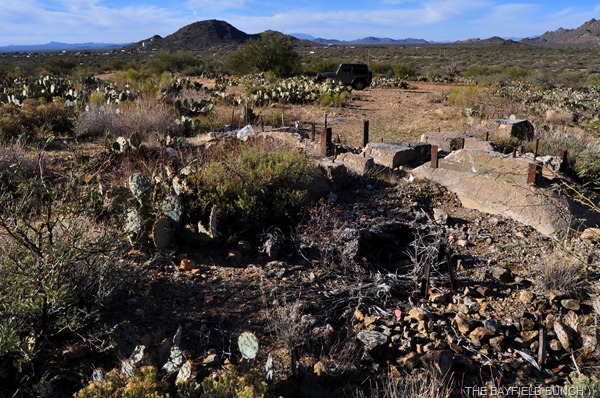 By the looks of the terrain & close proximity to the base of a small rocky mountain ridge we also knew this was prime Rattlesnake territory.  We have also heard some people come here to hunt them.  But, as I mentioned in a previous blog last week, because of cold winter temperatures & especially in the mornings, the snakes are in hibernation.  We would never let Pheebs run free through the rocks in Rattlesnake season that’s for sure.  And, chances are pretty good Kelly & I wouldn’t be out scrambling around in the rocks either. 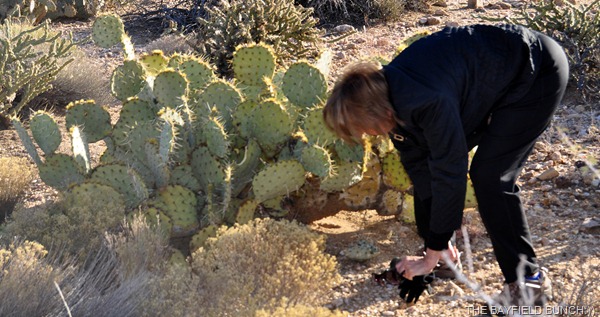 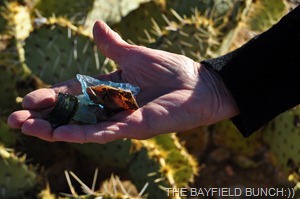 We have also found that here in the southwest, in our area anyway, things are done a little differently than back home in Ontario.  Much more laid back & that includes the contractors.  Nothing seems too official.  Nothing seems to formal.  Contractors seem a little more professional back home somehow.  A little more regimented or something.  We have found here that things are done, or not done on a handshake.  Once something is agreed upon the fellow doing the work may show up the next day, maybe a week or two later, or maybe not at all.  All of a sudden someone just kind of shows up in the driveway one day.  ‘Laid back’ seems to go with the territory & it’s something we have had to adjust to while here.  We have our fingers crossed that our screen door fellow will show up shortly with our newly built screen door.  Fingers also crossed that our ‘roofer’ guy will show up this week or next to do a section of our roof.  I like the laid back attitude of the south-west, but sometimes I do get a little impatient with the slower pace.  An old habit from northern living I guess. 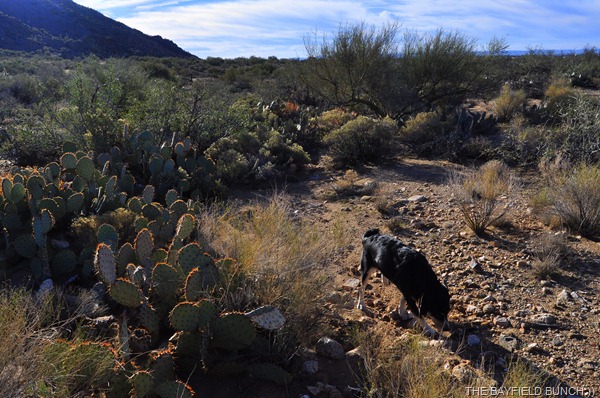 I must have transported a little kinetic energy when I wrote the above paragraph earlier this morning.  Returning from our Jeep ride later we saw our corn broom holding what appeared to be a note against our front door.  It was from our screen door guy.  Note said, “Happy New Year” – “your screen door is in the works as we speak”.  “No one home…9:05 a.m”. Now, how nice is that for some good old southwest hospitality eh:)) 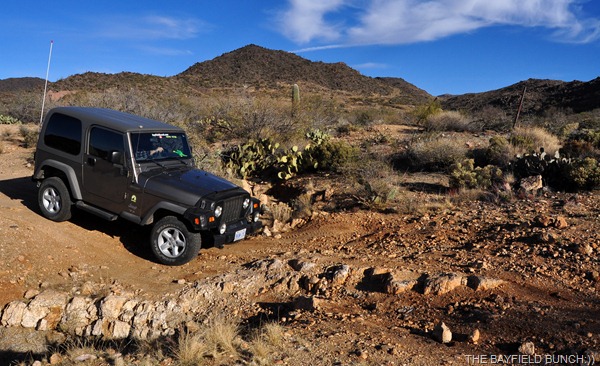 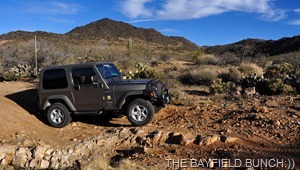 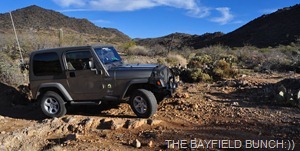 NOPE, NOT GONNA SELL THE JEEP, NOT EVER NOT NEVER:))

Finished my bathroom paint project this afternoon.  Figured that’s enough painting for awhile until I remembered I still have a garden shed outside to finish.  With nicer weather here now, maybe I’ll get that done this week. 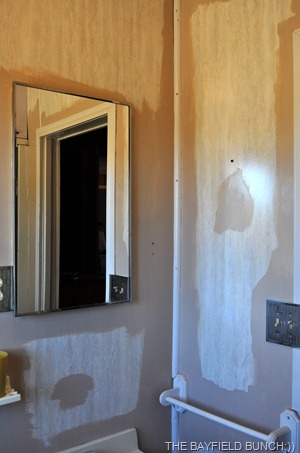 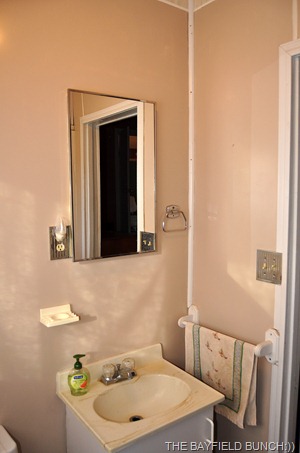 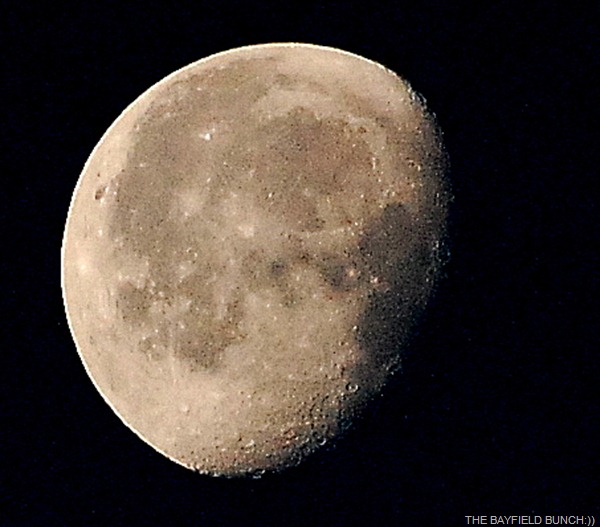 GROANER’S CORNER:((  Boudreaux and Thibodeaux worked together and both were laid off so they went to the unemployment office. When asked his occupation, Boudreaux answered, "Panty Stitcher. I sew da elastic onto ladies' cotton panties.

The clerk looked up Panty Stitcher. Finding it classified as "unskilled" labour", she gave him $300 a week unemployment pay.

Thibodeaux was asked his occupation. "Diesel Fitter," he replied. Since diesel fitter was a skilled job, the clerk gave Thibodeaux $600 a week.

When Boudreaux found out he was furious. He stormed back into the office to find out why his friend and coworker was collecting double his pay.

The clerk explained, "Panty stitchers are unskilled and diesel fitters are skilled labour."

"What skill?" yelled Boudreaux. "I sew the elastic on da panties, Thibodeaux puts dem over his head and says: Yeah, diesel fitter."