IS IT TIME TO DOWNSIZE YET?? 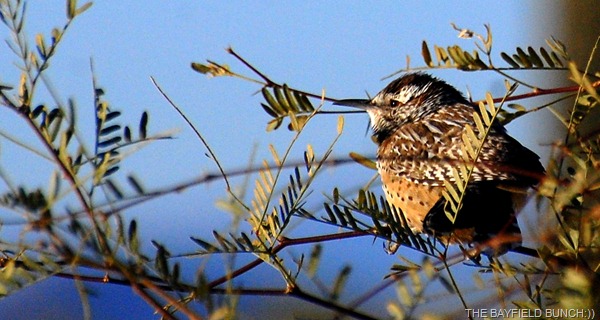 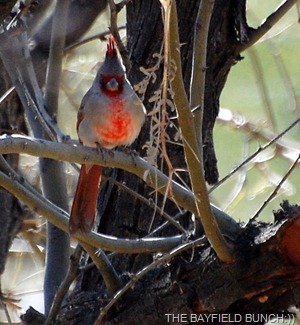 CACTUS WREN & A SILVER CARDINAL IN OUR BACK YARD
With our recent spate of cold weather & below freezing nights we have decided to make some changes for next week.  Our company arrives from Rochester Monday & we originally planned for Kelly’s brother Peter & wife Leslie to stay in the Motorhome.  I think we will now have them stay in the warmer house & I will stay in the rig.  I am familiar with how all the systems work.  Furnace, propane heater, etc.  Plus, Pheebs & I will be as snug as a couple bugs in a rug in there & I do like the adventure of camping out.  It will kinda be like boondocking without leaving the driveway.  Besides, every young boy & his dog need a Fort:)) 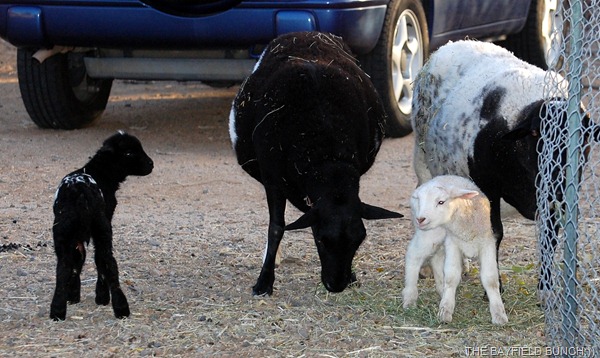 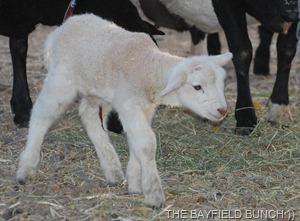 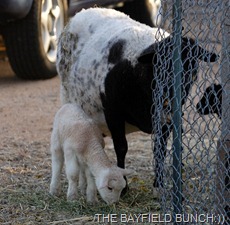 NEW ADDITIONS ON OUR BLOCK…THESE 2 LAMBS ARE LESS THAN 24 HOURS OLD
And, speaking of the Motorhome.  Been a little talk going around here at the Bunch again about downsizing our Motorhome to something smaller, easier on gas, & just easier to get around in. Something less costly to transport us between Ontario & Arizona. We have driven our Motorhome to the southwest 5 of the past 6 years & our last trip here a few months ago cost us about a thousand dollars for fuel. Also looking for something Kelly will be more comfortable driving as well. We had briefly considered the truck & trailer route last summer but we’re back to a self contained motorized vehicle again. Something under 24 feet. Been looking online at some of the Class B+ units. Chinooks or one of those Leisure Travel styles. Maybe a small Class C or a Winnebago Rialto. We would either trade in our 2003 33’ Damon Challenger, sell it privately, or maybe find someone with a smaller RV wanting to move up to a larger RV & do some kind of trade. We ‘might’ take a Jeep drive over to Quartzsite in the next couple of weeks just to see what’s out there & give us an idea of what we might be looking for. Some of the bigger RV Dealers will be set up there for ‘the big show.’ 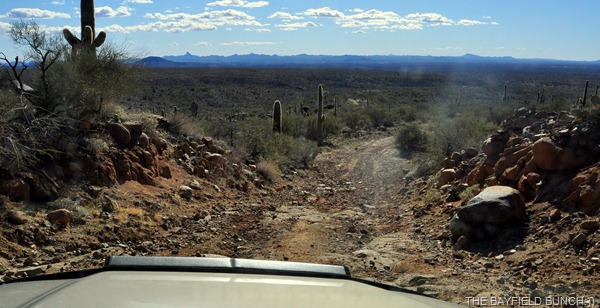 TOOK OURSELVES OUT FOR A SHORT JEEP RUN THIS AFTERNOON
Four of Kelly’s five children are located in Cambridge Ontario. When she goes over to see them in the summer she likes to stay for a couple days but would like to have her own quiet place to stay. With a smaller RV she could easily zip over & conveniently park in a driveway. 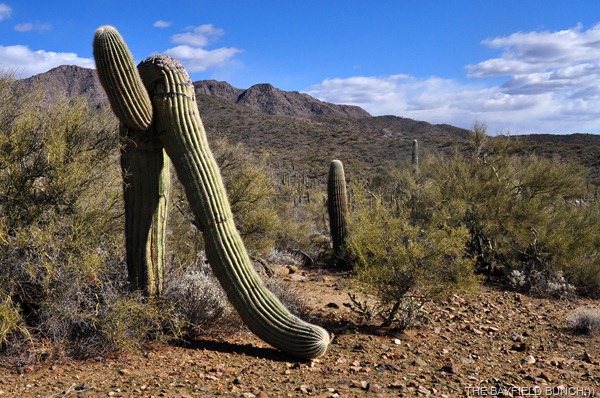 THIS POOR OLD SAGUARO WAS JUST PLAIN POOPED
Tires, exhaust systems, shocks, brakes, etc are less expensive on a Class B or C chassis as well. No troublesome hydraulic levelers to worry about. Don’t have to worry about ripping the roof off under low bridges or low tree branches, etc. A smaller unit is easier to keep clean. And, we would definitely stay with a gasoline engine rather than diesel. The list goes on. Just something we’re thinking ahead about again. 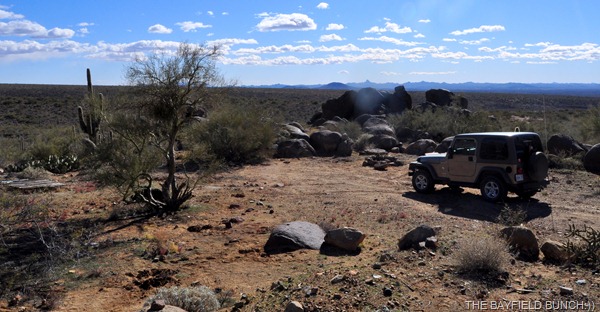 FOUND SOME PETROGLYPHS ON THOSE DARK ROCKS
Having been in our southwest house now for the past couple months we already know this has been the right time & the right move for us. We have really enjoyed our boondocking travels these past 6 years but we also know that era is likely behind us now. With our home base established in Arizona we no longer need a large Motorhome to live in for half a year at a time. We still intend to travel & boondock but not for long monthly periods of time anymore. When in Bayfield for the summer our Motorhome sits unused for 6 months & now with our Congress house it will be sitting for longer stretches once again. Class A’s are more expensive to maintain than smaller rigs so it doesn’t make a lot of sense for us to have a large aging Motorhome sitting in our driveway anymore if it is only used to travel between Bayfield Ontario & Congress Arizona. And, of course, shorter side trips. 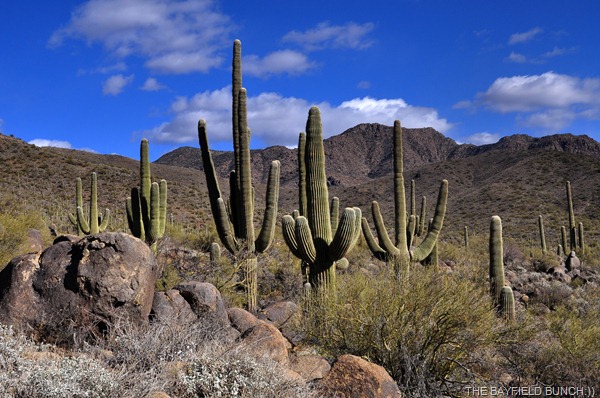 Had us a real icy wind blowing this morning so it was a short walk.  Our coldest morning since arriving back in November.  Figured I’d better wait until the sun got up a good ways before resuming my outside projects.  Meanwhile, it was a good opportunity for catching up a few inside things.  Now that we have a new roof on it was time to repair my bedroom ceiling.  Hauled in my big ladder, did a little scraping, a little painting & the ceiling is looking good as new.  Kelly slipped out to do a little browsing over at the CONGRESS DEPOT where a week-end outdoor flea market was underway.  By 11 a.m. Pheebs & I were dressed warm & back outside working on our crushed stone project for awhile.

CRESTED SAGUARO
All you 5th wheel drivers out there might be interested in this.  I know I would be if we still had our truck & fifth wheel.  Check out what happened to JIM & SANDY. 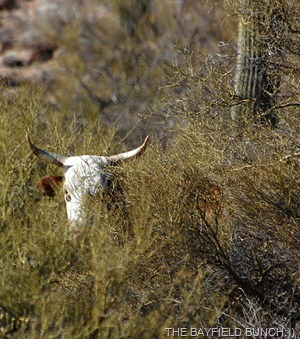 <<< WE HAD A FEELING WE WERE BEING WATCHED TODAY
Wickenburg Jim had told us of a spot on the way to Stanton where we could find a couple Petroglyphs, so with a quick stop at the Congress Depot first, we headed off in search of the Petroglyphs.  An old mining road leads off in the direction of the Weaver Mountains & we knew exactly where the road was because we had been up it before & found us a CRESTED SAGUARO CACTUS last February. 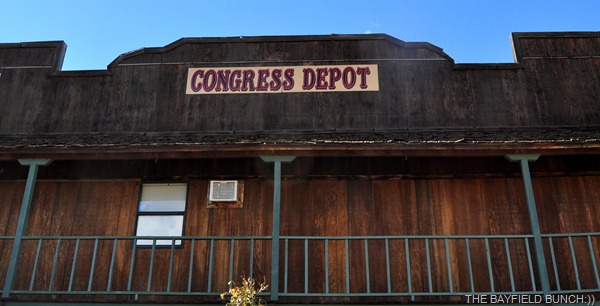 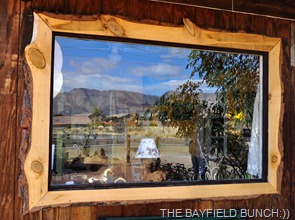 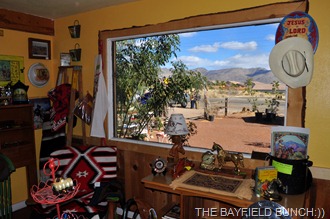 TWO VIEWS OF A CONGRESS DEPOT WINDOW…LOOKIN IN & LOOKIN OUT:))
Found the Petroglyph’s right where Jim said they were.  It’s a wonder he ever found them in the first place because they are very faint compared to some we have seen.  Had us a little rock scramble & headed for home.  Rock scrambles are better for me in the mornings now.  Legs just aren’t up to the challenge for later day scrambles. 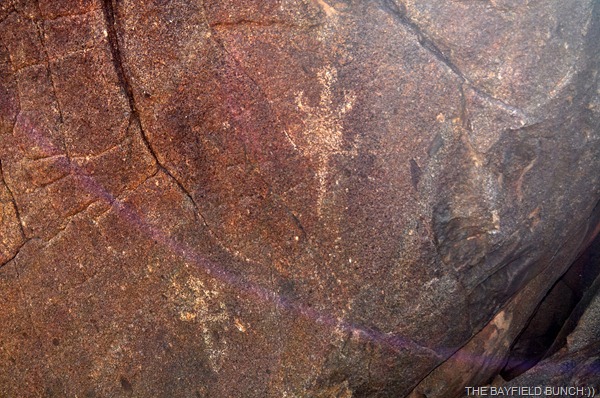 TWO INDIAN PETROGLYPHS
GROANER’S CORNER:((  While enjoying an Early morning breakfast in a northern Arizona truck stop, four elderly ranchers were talking.  One gentleman turned to the fellow on his right and asked, "Roy, aren't you and Bea celebrating your 50th wedding anniversary soon?"
"Yup, we sure are," Roy replied.
"Well, are you gonna do anything special to celebrate?" another man asked.
The old gentleman pondered this for a moment, then replied, "For our 25th anniversary, I took Bea to Mesa. Maybe for our 50th, I'll go down there and bring her back."
-------------------------------------------------------------
- Tourists see the world, travelers experience it.
- Home is where your pet is:))
- "If having a soul means being able to feel
love and loyalty and gratitude, then animals
are better off than a lot of humans."
(James Herriot)
- The pessimist complains about the wind; the optimist expects it to change; the realist adjusts the sails -William Arthur Ward
- The only thing better than right now will someday be the memories of right now...AL.
- It is not so much having nothing to do as it is not having the interest to do something....AL.
- OUR PHOTO ALBUMS -https://picasaweb.google.com/117858411710794543295/
stargeezerguy@gmail.com
Posted by Al Bossence at 1/12/2013