KINDA LIKE GRAND CENTRAL STATION AROUND HERE TO DAY 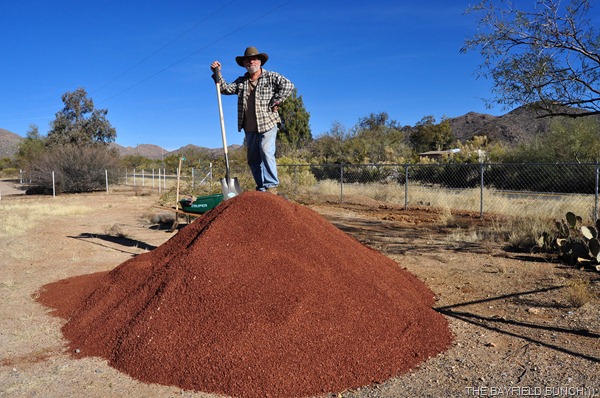 Pheebs & I usually slip outside every morning around 4 a.m.  Me to do a little stargazing while Pheebs tends to business.  Always have to dress warm because desert night’s are cold.  PJ’s, housecoat, & slippers work just fine.  This mornings temp was 43F.  Later in the day we nearly made it to 70.

Last load of crushed stone a couple months ago came at 8:05 a.m in the morning.  Fella said on the phone Monday our truck load of stone would be here first thing this morning.  I was outside at 7:45 & had the gates open wide.  Positioned my wheelbarrow nearby & stood at attention with my shovel at the ready.  Focused my eyes down the road & waited.  The truck came at 11:10. 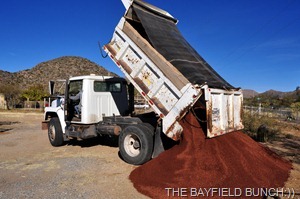 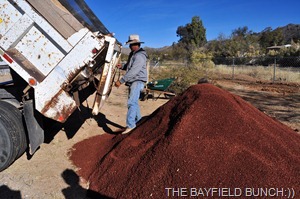 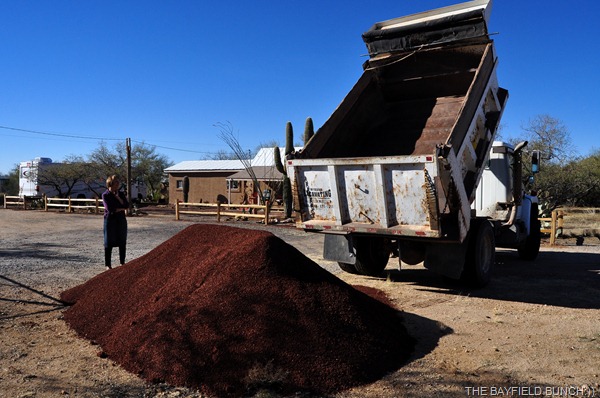 Our screen door guy, Ted from North Ranch  came about 10 minutes after the gravel truck guy left & we now have a quality built  screen door hanging on the back of our house.  Not a perfect fit but that’s not the fault of the door, it’s the old crooked cowboy house.  Just like an aging grizzled cowpoke himself, it has a few twists, bends & gnarls.  Might be able to close up some of the door gaps with a few layers of weather stripping.  Ted’s coming back in a few weeks to fix up a little soffit problem under one of our eaves.  Nice to have someone who knows what they are doing.  Ted’s a retired police officer. 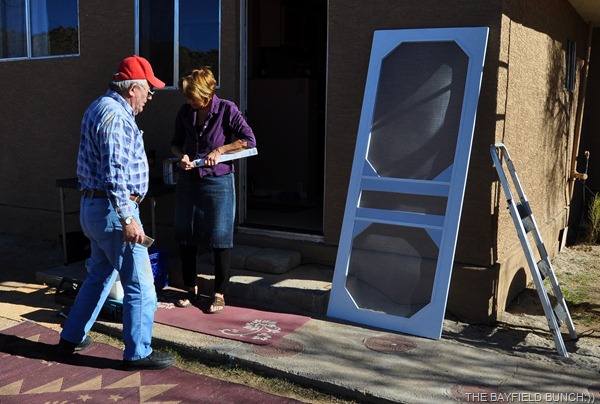 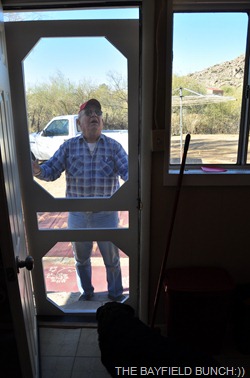 <<< TED FITS THE DOOR
This 3/8 inch crushed stone is sooooooooo much nicer & easier to work with than our first load of 1/2 inch stone a couple months ago.  Too bad we have two different sizes to blend together now but not much we can do about it.  Only took about a half dozen wheelbarrow loads of stone to put my right leg pain right back up there in the higher numbers again.  So disappointing. 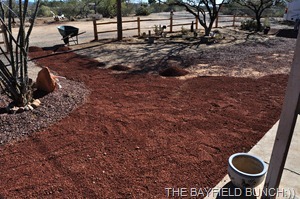 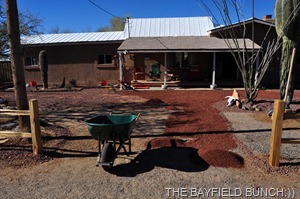 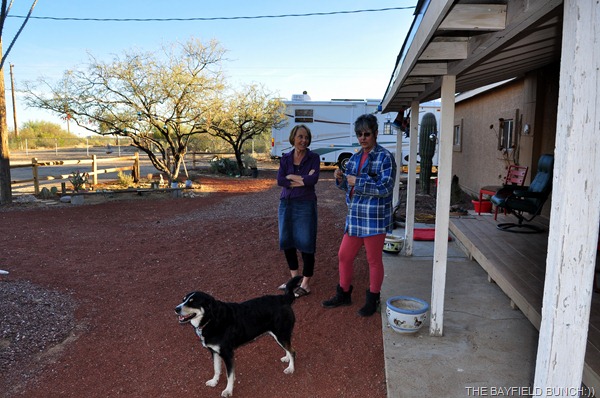 THIS 3/8 STONE IS JUST SO MUCH BETTER THAN THE 1/2 INCH STONE…KELLY, PHEEBS & GLENDA FROM ‘CASITA ESCAPES’
A couple honks at the gate told us the Fed-Ex driver was here with a roll of rubber underlay for that big mat in our living room.  Pheebs won’t keep bunching it up now.  An hour later UPS was out front with a new set of Skype headphones for Kelly.  Her old headset was no longer working.  And somewhere in this Grand Central Station kind of a day, Kelly managed to install a new battery in my Toshiba Satellite A505 laptop.  It had come in the mail Monday.  Good thing the roofers didn’t come today or we would have been swamped.  Marteen, our fence builder did show up though to load up an old swamp cooler we didn’t want. 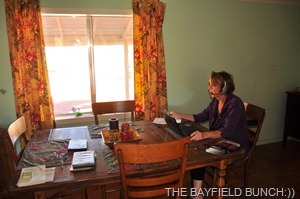 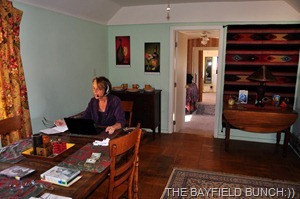 KELLY WORKS ON DEER PARK LODGE REGISTRATIONS FOR THE COMING SEASON…WITH HER NEW SKYPE HEADSET…COOL:))
A week or so ago we had an email from Glenda over at CASITA ESCAPES.  They were winding up a month long stay in Zion Canyon & were heading on down our way with a short stop in Sedona.  Wondered if we were up for an overnight stay & we said, sure, come on down.  Glenda & Jeff rolled in around 4 o’clock this afternoon & set up in our side yard.  Friendly full timing RV folks.  Pheebs was so happy to have another doggy Pal to play with & she got along with Keira just fine.  And, a pussy cat too:)) 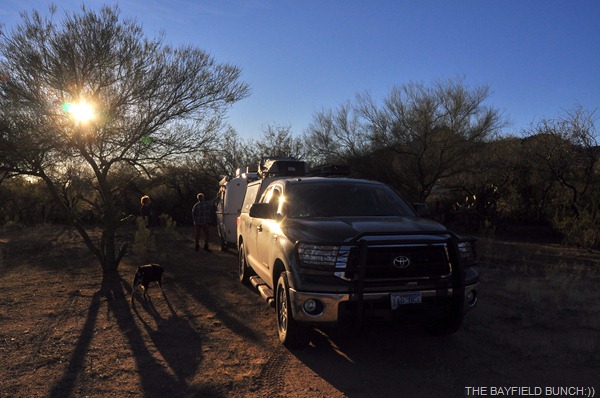 SNUGLY TUCKED AWAY IN OUR SIDE YARD 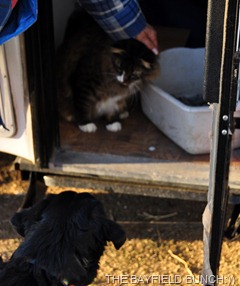 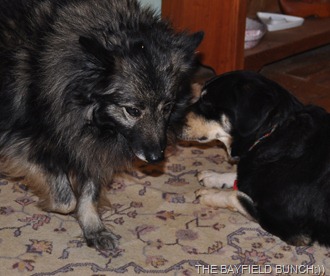 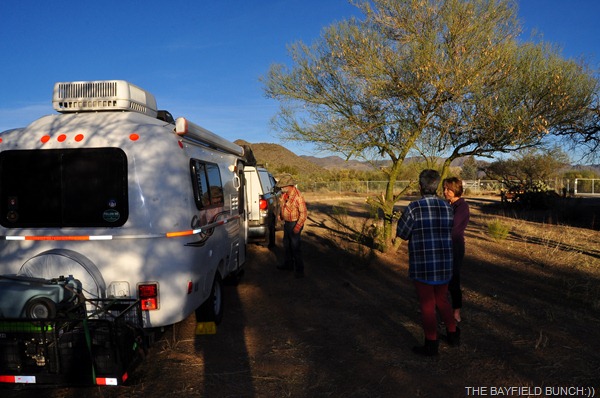 They have the neatest satellite dish.  Just plug it into power & the satellite whizzes, whirs, & twirls slowly around until it finds & locks onto the satellite automatically.  Neat-O, now why didn’t we get one like that years ago. Could have saved ourselves a whole lot of aggravation for sure!! 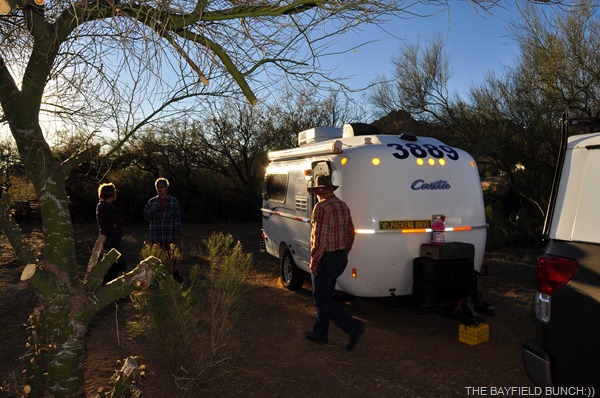 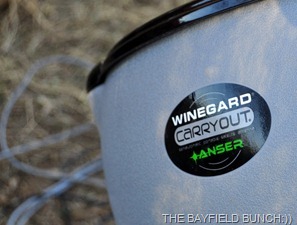 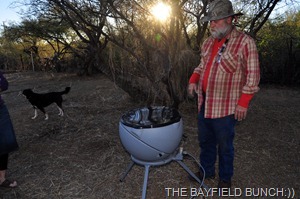 NO, THAT IS NOT A BBQ JEFF IS STANDING OVER, IT’S THEIR AUTOMATIC SATELLITE FINDING DEVICE 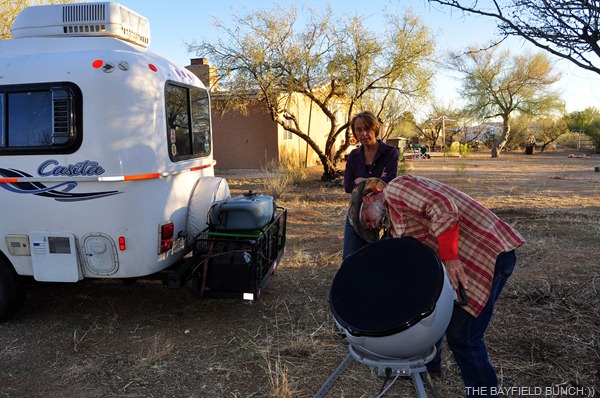 JUST PLUG IT IN & OFF IT GOES TO FIND THE SATELLITE
Whenever company comes it’s always a great opportunity to grab a yummy Pizza Supreme from the CONGRESS DEPOT.  With the late afternoon temps dropping it was good to slip into the house & sit ourselves down around our dining room table & dig in.  Glenda & Jeff are early to bed folks similar to Kelly & I so as soon as the Pizza was wolfed down, it was nighty night for everybody. 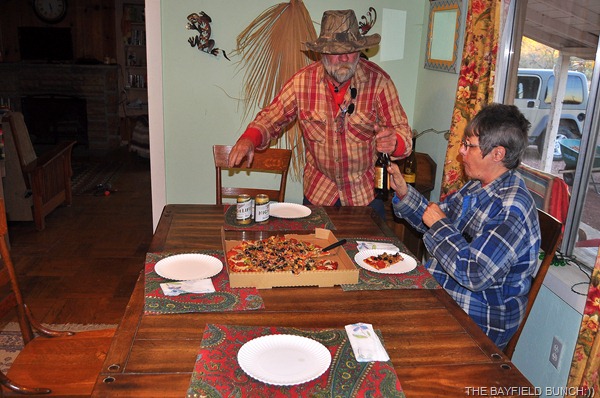 Judy, over at TRAVELS WITH EMMA will be undergoing hip surgery in the next few days & Nurse Ratchet has already traveled 2,009 miles to be with her in the difficult days ahead. Judy, a fulltiming RVer, volunteers at many wildlife refuges around the country. Currently in the Okefenokee National Wildlife Refuge, Georgia, Judy is our ‘go to’ person for bird photo identifications here in Blogland. If it has a feather on it, Judy knows what it is:)) 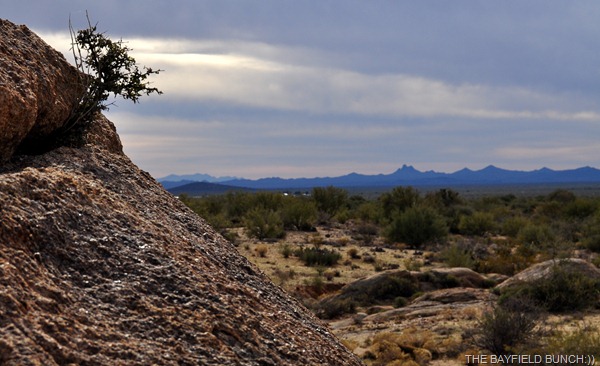