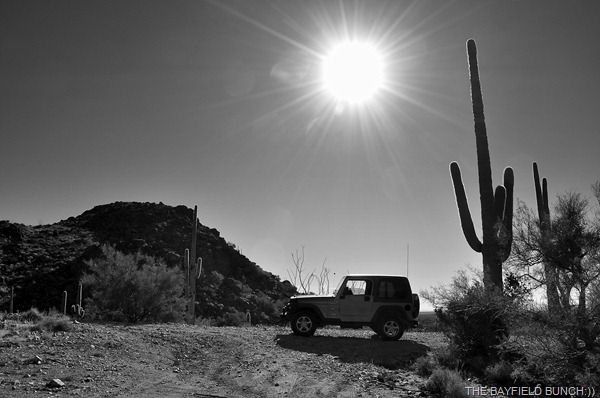 The Big Dipper is straight overhead & slightly to the North in the predawn sky now.  The dipper’s handle points southeast in the direction of my favorite summer night’s sky constellation SCORPIOS, the large Scorpion with it’s warm colored star heart, ANTARES.  This dark sky Scorpion also has two giant star claws.  The Scorpions tail will soon be visible as it winds down around the horizon curling back up & ending with two stars known as SHAULA & LESATH.  These stars are commonly referred to as the Scorpions stinger stars.  If you are up before dawn now, or out under the June, July, August summer skies, the big Scorpion will be in the southern hemisphere traveling east to west…..just above you.

I’ve been able to change up my morning routine a bit this past week.  While staying in the Motorhome for 5 days last week I got into the habit of not turning the mindless television on thereby not irritating myself first thing every morning with the repetitive doom & gloom news reporting by stations like CNN.  Local news channels are even worse with their panels of giggly squawking chickens thinly disguised as responsible news reporters.  I am continuing & hope to continue my habit of not starting my days off by deliberately irritating myself anymore with morning news channels.  Now, it is out of bed & into my relaxing chair with computer on my lap listening to my favorite Sirius satellite radio ambient music channel, the Spa at 068.  A much nicer way to start the day methinks:)) 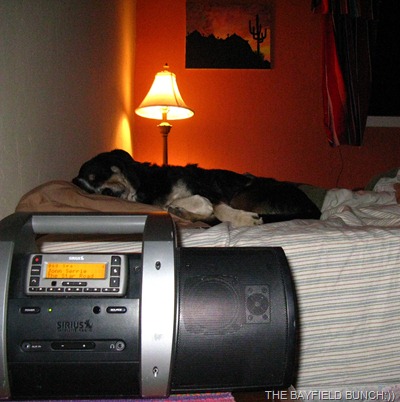 Last week while out on Jerry’s PETROGLYPH WALK he told us of a Crested Saguaro Cactus across the valley along a ridge line.  Said it was one of the nicer crested Saguaros he had seen.  This morning, with Jerry’s words still fresh in our ears, we set off in search of that Saguaro. 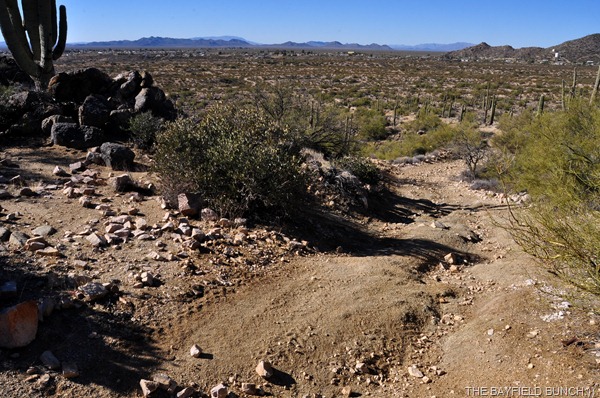 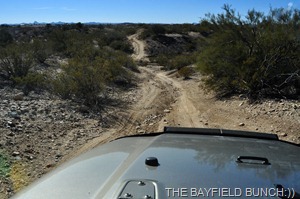 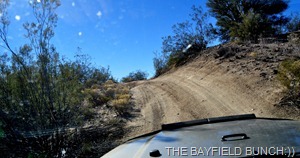 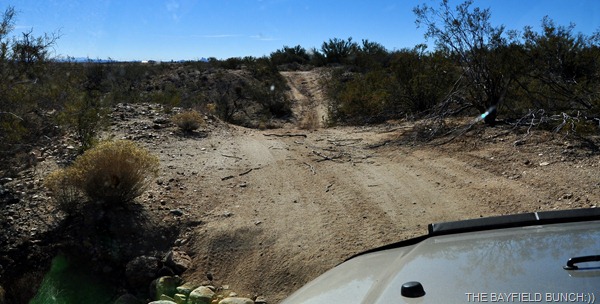 We knew a road out near the Pioneer cemetery that would lead us back along that ridge line so that is where we headed.  A little rough & tumble in spots but we took it slow following along the northwest facing ridge, heading southwest.  About the time we figured we had missed it, I spotted something ahead on the left.  Looked like a crested Saguaro alright. Found a rare flat spot & parked the Jeep close by.  Pheebs was out the door & off exploring. 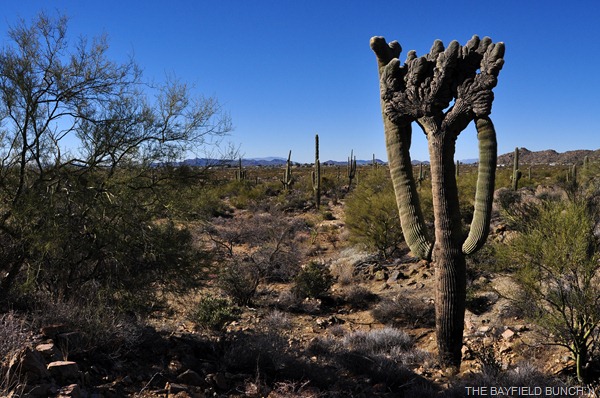 YES, THIS IS DEFINITELY A MIGHTY FINE CRESTED SAGUARO 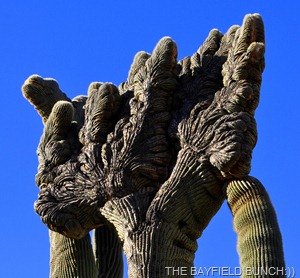 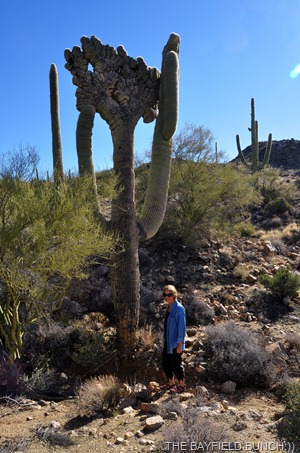 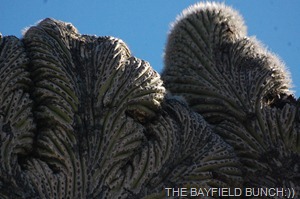 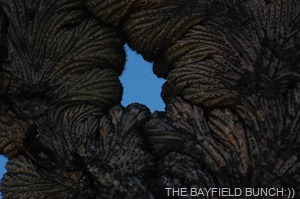 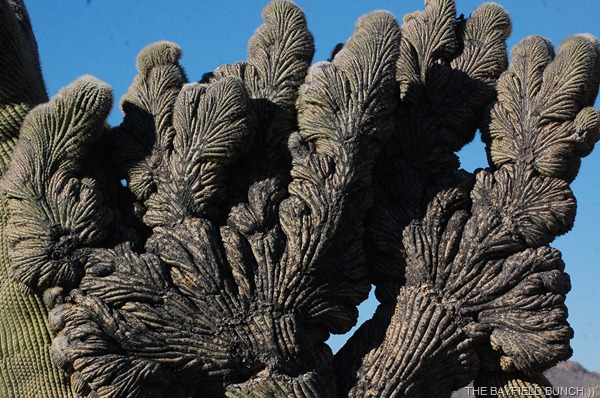 At first glance & from a distance I thought this was the shortest Crested Saguaro I had ever seen but as we neared we could see the Saguaro was growing from a low hillside gully giving it a short appearance.  It was truly a fine specimen with many twists, curls, & swirls.  No one really knows what causes Saguaros to occasionally distort like this but when they do, they end up looking quite remarkable.  You can see another nice Crested Saguaro we found on Pipeline road near Ajo Arizona last year…IN SEARCH OF THE SAGUARO FOREST.  Another Crested Saguaro here…GROWING GHOST TOWN OF STANTON & lastly, another one on this blog entitled, WE FOUND THE MICA MINE. 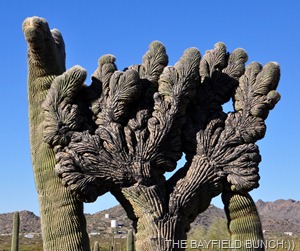 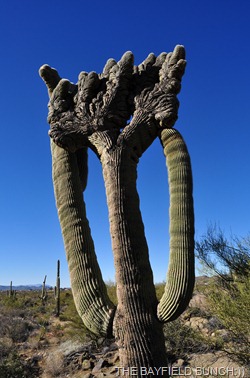 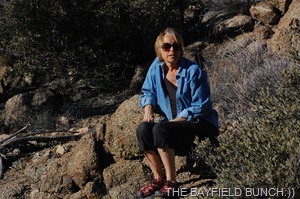 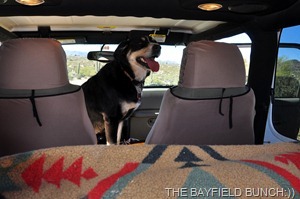 Near the Crested Saguaro we saw another rough & tumble road heading in the direction of Congress so rather than return the way we had come we decided to follow it in hopes it would lead us to a highway.   Better than that, it led us right back to Ghost Town Road near the railroad tracks on highway 71.  But, it was a bouncy ride all the way as we skirted some deep gulleys, made our way through sandy washes, & slowly clambered over a series of ruts & grumbles.  Even saw a train go flying by.  Actually, it was about 10 train engines all joined together,  I suspect they were headed to the town of Hillside to load a lot of train cars with copper ore from the big copper mine in nearby BAGDAD.

TRAIN ENGINES IN THE DESERT 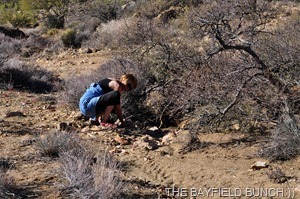 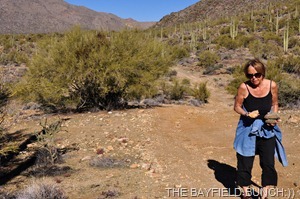 KELLY’S ALWAYS KEEPING AN EYE OUT FOR GOLD & YEP, LOOKS LIKE SHE FOUND ANOTHER BIG NUGGET:))

Again, it was nice to be out in a part of the desert nearby that we had never seen before.  Always something different to see, challenging hills to climb, & interesting roads to rattle & bump along on.  No two Saguaros are the same, no two mountain tops alike, & the valleys & canyons can quickly change in a few miles, or a few feet in altitude.  Always something to see & do here in the southwest.  Always somewhere to go:)) 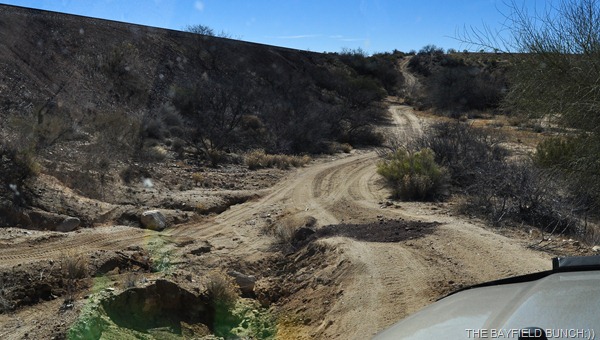 FOLLOWING THE TRAIN TRACKS BACK TO CONGRESS 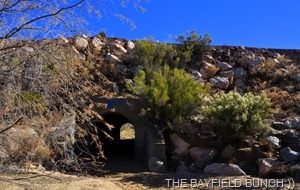 Didn’t do a lot of yard work today.  Leg is feeling much better so I am trying to give it a lengthier period of rest to see if that will heal whatever may be wrong with it.  And remember all those Cactus plants I hauled home & planted a couple months ago.  Well, that cold snap a week ago has killed about half of them.  Many are droopy & some are already turning black.  Very disappointing:((

GROANER’S CORNER:((  The judge read the charges, then asked, "Are you the defendant in this case?"
"No sir, your honor, sir," replied Jill, "I've got a lawyer to do the defendin'. I'm the person who done it."