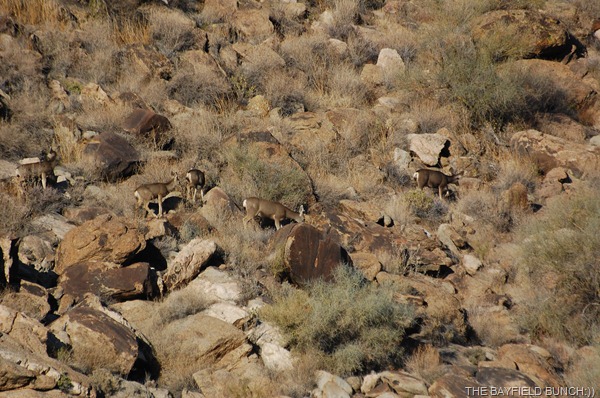 Despite 22F outside this morning, Pheebs & I, with 3 heat sources, were toasty warm in the rig.  Not often we run the furnace but I did fire it up to keep the lower water pipes warm.  Our Legacy Blue Flame heater (bought at Granny’s & installed in the desert near QUARTZSITE AZ in 08) is our favorite fuel efficient heat source & I also have a small Sunbeam electric heater as well.  With all 3 heaters going, Pheebs & I were blissfully in the tropics.  Us guys like to be toasty warm. 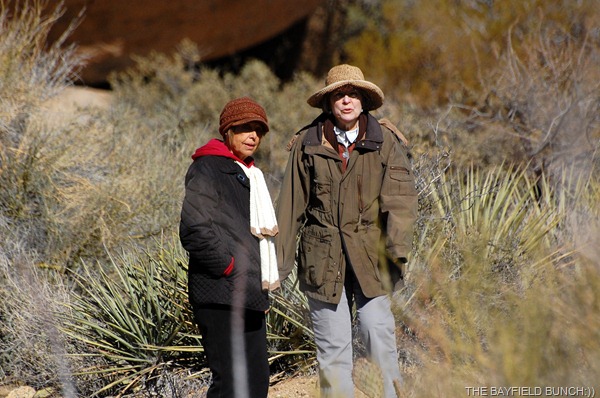 Had planned on Jeeping over to Stanton this morning & taking the old stage coach road up to Yarnell but with another freezing cold night Kelly was concerned about some possible ice patches on the road.  Instead we all jumped into the Jeep & headed out into the desert behind our place.  It was the first time since buying our Jeep Wrangler a few years ago that we ever had human passengers.  Mission & destination this morning was to show Peter & Leslie House Rock plus give them a up close look at the Sonoran Desert.   And, what better way than driving right through it. 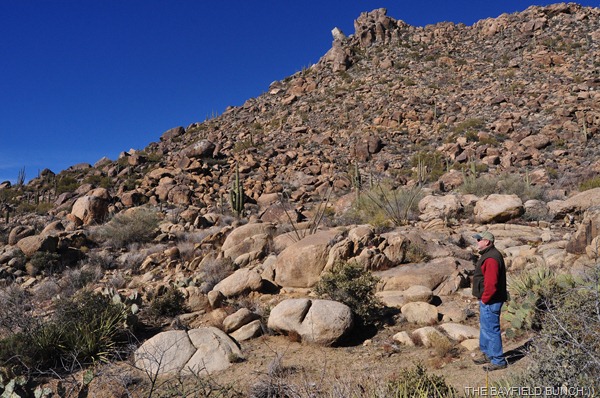 Despite a big bright sunny day, we had us a stiff breeze on the go making for a cold day.  We did manage a short walk around House Rock through boulders, cactus, creosote shrubs & mesquite brush.  It is always so nice to hear the great comments people make who have never seen or been in this kind of environment before.  Like we were, most folks are surprised at the many variations of green plant life.  The colors, the hues, the great rock formations & the endless puzzlements of unexplainable geology. 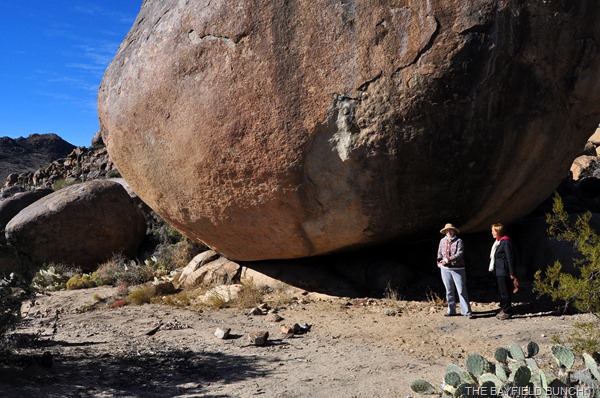 AT THE BASE OF HOUSE ROCK 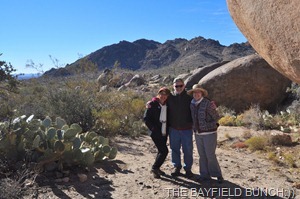 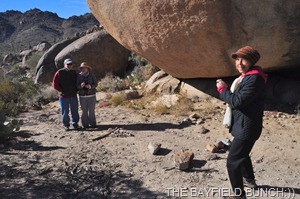 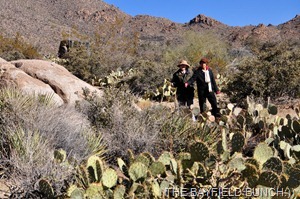 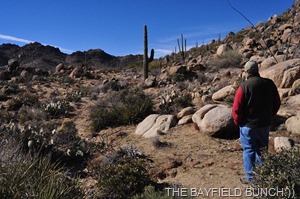 KELLY POINTS OUT SOME OF THE PLANT LIFE 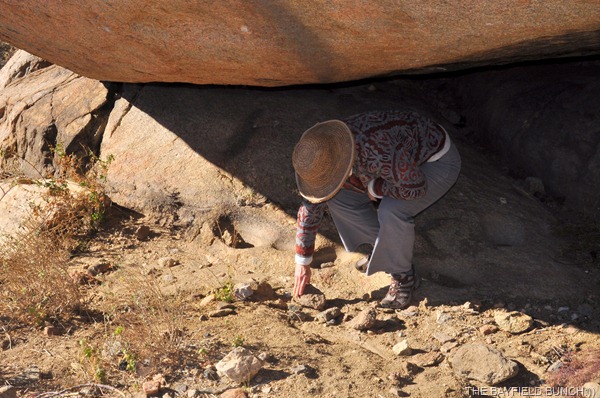 LESLIE, IN THE SHADOW OF HOUSE ROCK CHECKS OUT SOME INDIAN GRINDING HOLES (MORTEROS)

We didn’t linger at House Rock long because of the cold wind so moved off further west bumping our way along an old rocky road heading for a tall windmill Kelly & I had come across last week.  As we gained altitude, rock formations changed, Saguaro & Teddy Bear Cholla became more abundant.  And, we found a herd of cattle at the Windmill site. 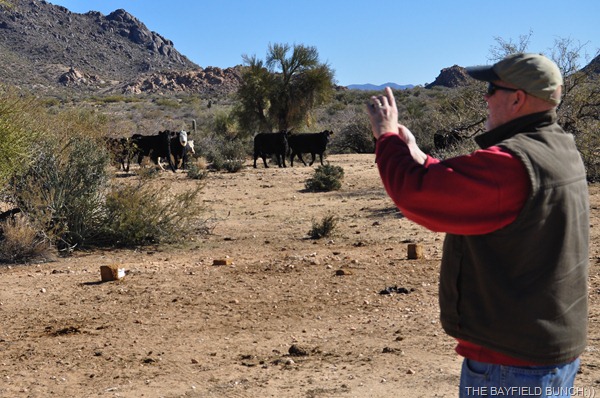 Instead of returning the way we had come, we swung off on another dusty road heading southwest.  Had never been on this road leading back out onto the desert floor before but I knew sooner or later we would intersect highway 71 or highway 93.  The sandy road was well traveled & we saw the first of a few Joshua trees.  I knew there were many more Joshua’s just north of us but it was time to head ourselves back home.   Wasn’t long before we found our way back to highway 71 leading to Congress.  All & all, a nice little Jeep jaunt across the desert through a pass in the Date Creek Mountains.  And, on some new desert roads too. 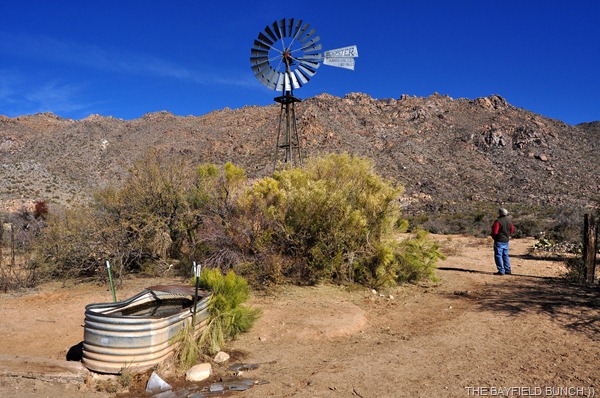 We were home by 1 p.m. & I wasn’t long in crashing out in the warm Motorhome for a slight doze or six.  This up at 3 a.m. most mornings usually knocks the stuffing's out of me by mid afternoon of the following day. 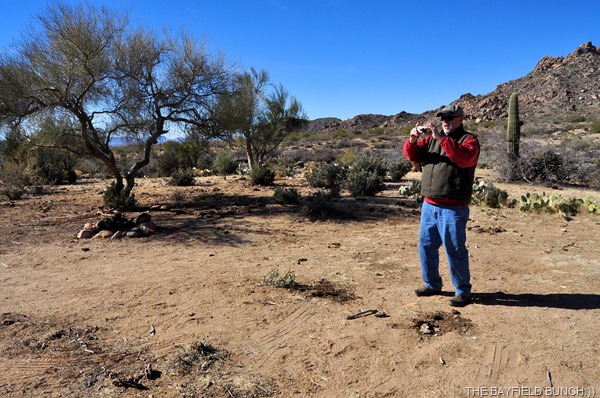 PETER HAD A GOOD TIME WITH HIS CAMERA TODAY 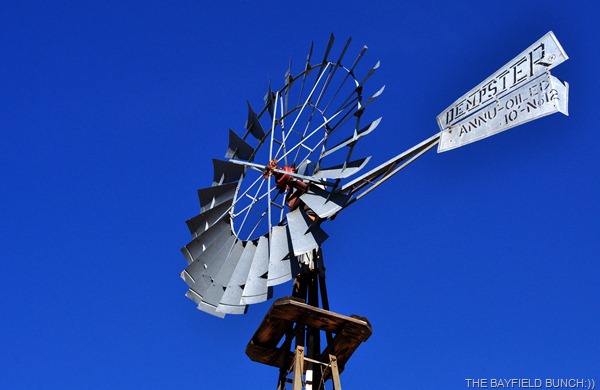 GROANER’S CORNER:((  Little Harold was practicing the violin in the living room while his father was trying to read in the den. The family dog was lying in the den, and as the screeching sounds of little Harold's violin reached his ears, he began to howl loudly.
The father listened to the dog and the violin as long as he could. Finally, when he could take it any longer, he jumped up, and yelled above the noise, "For Pete's sake, Harold, can't you play something the dog doesn't know?!"