A FEW THOUGHTS ON TALKERS & LISTENERS 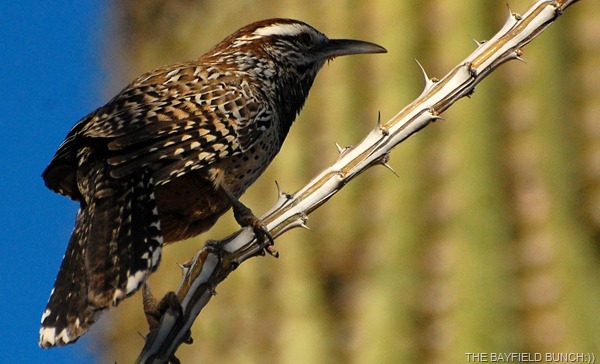 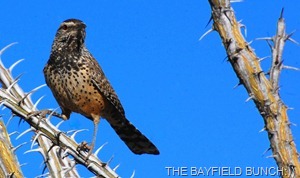 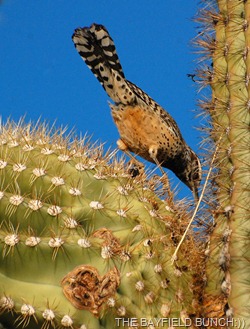 CACTUS WREN
It is so nice to not have heaters running all night.  55 at 5 this morning was pretty nice for a desert climate at that hour, at this time of year.  In our 5 day cold snap recently we found our little plug in heaters were no match for the cold so had to revert to our two big electric baseboard heaters.  They did a good job in keeping us warm alright but they also did quite a job on our finances too.  We just received the electricity bill from hell.  Yeeeouch!! 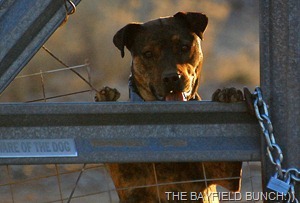 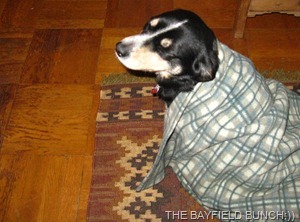 THIS FELLOW ACROSS THE ROAD JUST LOVES THE PHEEBS & EVERY MORNING HE RUSHES TO THE GATE TO HAVE A BIG NOSE TO NOSE WAGGING TAIL CHIN WAG WITH HER & CRIES WHEN SHE HAS TO LEAVE…AND YES, IT WAS EVEN COLD FOR THE PHEEBS LAST WEEK
So happy to read rescue dog Molly is fitting in so well with her new owners over at the BIRDING RVERS.  They have a great shot of Molly on the couch reposing in her ‘belly scratch’ position.  And, IVAN has been busy jostling with crowds in Quartzsite these past few days.  Wandering Willy doesn’t blog anymore but rumor has it he’s hanging out just south of Why Arizona these days.  It was nearly a year ago when Kelly & I, Pheebs, & the Motormouse rolled out of Darby Well road & met up with Wandering Willy & Ivan for a few days near Bouse Arizona.  From there it was on to Slab City California, Borrego Springs, Desert Center, back to Bouse & finally over to Congress Arizona where, shall we say, the rest is history. 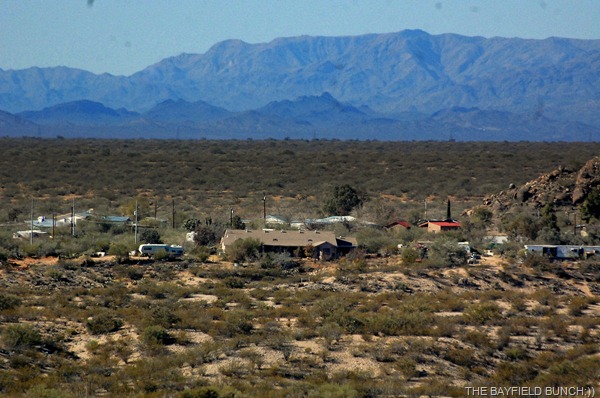 OUR MOTORHOME IS PARTIALLY VISIBLE IN THIS PHOTO…SEE LONG HOUSE IN CENTER & AN OLD 5TH WHEEL TO THE LEFT…THE TAIL END OF OUR RIG IS THAT SQUARE PATCH OF WHITE IN THE BACKGROUND BETWEEN THE HOUSE & 5TH WHEEL…THE RED ROOF PLACE  IS OUR NEIGHBOR BEHIND US (300mm about a mile away)
And, if you are still having problems with Anonymous spams or conventional spams overloading your blogs comment section you might want to check out a solution over at Rick’s blog…A TIP FOR BLOCKING ANONYMOUS SPAM. 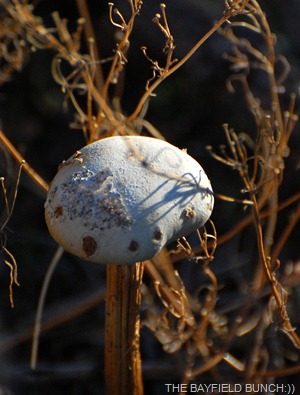 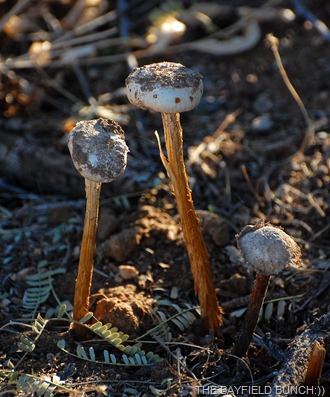 SPOTTED THESE ON THE DESERT FLOOR THIS MORNING, MUSHROOMS??
Had thought of doing a day trip over to Quartzsite to have us a look at some smaller RV’s but I don’t think that is going to happen now.  I think we have just got ourselves too darn comfortable here.  Heck, we haven’t even got over to see MIKE & PAT yet & they’re only about 3 miles away.  Kelly’s still busy checking out RV’s on-line to see what is available & what’s out there.  Thanks to the folks who sent in suggestions & leads. 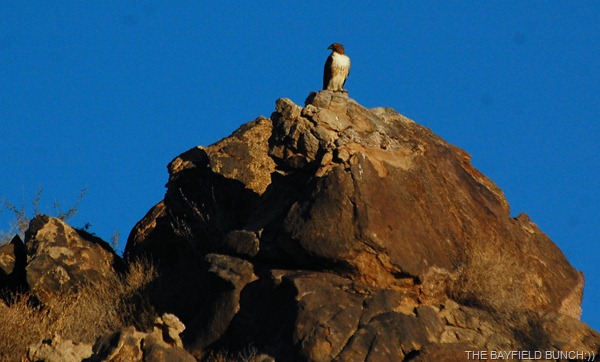 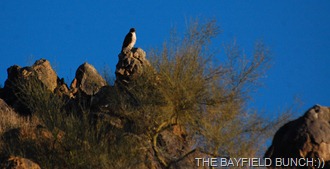 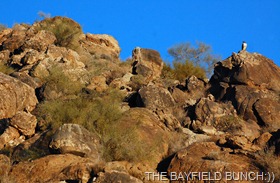 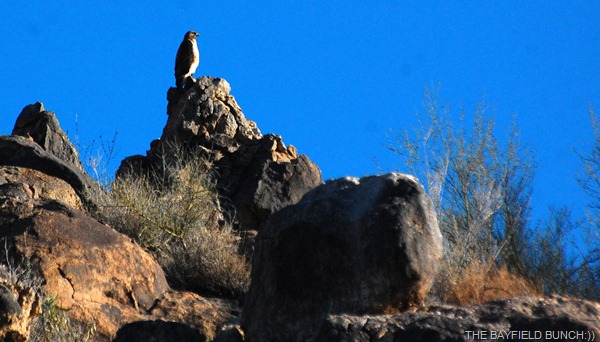 NAW,  DESPITE IT’S APPEARANCE IT CAN’T BE A PENGUIN CAN IT…MAYBE IT’S A HAWK THAT JUST ATE A COW
One of the most asked questions I get sometimes is, ‘where do you get all your jokes for Groaner’s Corner’?  One word answer, ‘Internet’.  If I want Christmas jokes I just type ‘Christmas jokes’ into Google Search.  One can type in anything they want such as Monk jokes, Elephant jokes, Clever jokes, Wise sayings, Knock Knock jokes, Seniors jokes, Puns, Blonde jokes, etc, etc, etc.  There are millions of jokes out there on-line.  Sometimes readers send in jokes but I’ve been kind of hesitant in using them for fear of being deluged with folks sending in jokes.  But, occasionally I do slide in a reader’s joke or two.  I do thank readers for their thoughts though. 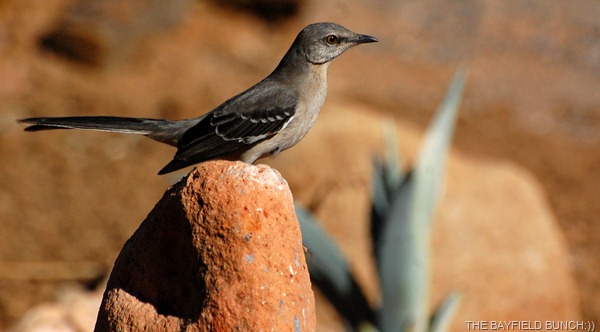 A NORTHERN MOCKINGBIRD
Due to our limited Verizon bandwidth each winter in the southwest I have to stay away from any video You Tube type stuff.  I’m not a big You Tube guy anyway.  We have the Verizon 10 Gig plan but still push the limits each month. Anything audio/visual being emailed to us from readers I put in a separate file to be looked at when we return home in the Spring. No limits or over usage penalties with our cable internet in Bayfield.  One reader, Lloyd, sends in some really nice audio/visual stuff that I can occasionally use in the blog during summer months but not while we are on our southwest travels using Verizon.  By the way, thanks for that enlarged ‘Target Rock’ photo awhile back Lloyd:)) 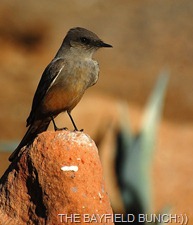 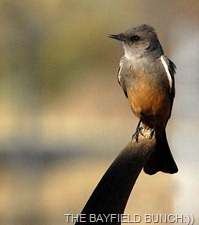 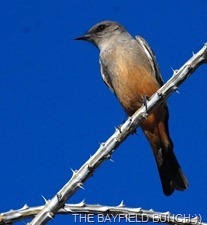 SAY'S PHOEBES
Sometimes, at my keyboard I rattle things off my head before I’ve had a chance to really think about what my head is even really rattling about. But, it is a one way conversation with myself I am comfortable with I guess.  Being a modest fellow, it is my way of talking without being interrupted, overwhelmed, or swamped by someone I might be talking to.  My ‘small talk’ paragraph kind of eluded to that a few posts ago. 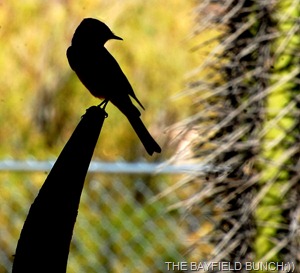 There are talkers & there are listeners. If two listeners meet, probably not much is going to happen. Each one will appear to the other as not being interested in what the other has to say & they will go their separate ways without having discussed much. If two aggressive talkers meet, it could be a battle of who talks the loudest, longest, & fastest that wins & the ‘out-talked’ one will probably walk away in frustration. If a talker & a listener meet, well, unless the listener is really interested in what the talker has to say, that may not work out so swell either. But, on rare occasions when both parties are able to find common ground, they can bring out the best of talking & listening in each other. In my opinion, that constitutes something enjoyably akin to a two way conversation. And, if that combination of agreeable listening & talking sparks a genuine interest & focus, it can probably be the start of a long lasting & meaningful friendship between two people. 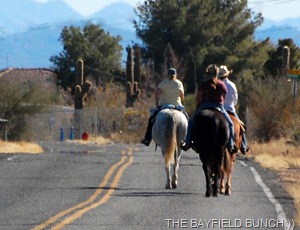 BIT OF TRAFFIC ON GHOST TOWN ROAD TODAY
I’m sure we have all met the non stop talkers though.  You know the one’s who never stop talking long enough to take a breath, never ask a question, & never take an interest in what you have to say.   They just go, go, go, go, & goooooooooo!!  Kind of like being run over & overwhelmed by a speeding Mac truck, over & over & over.  I guess blogging is just my way of avoiding getting flattened by all the out of control Mac trucks out there.  Sitting behind a keyboard is my safety zone.  I know many of these people mean well, but……. 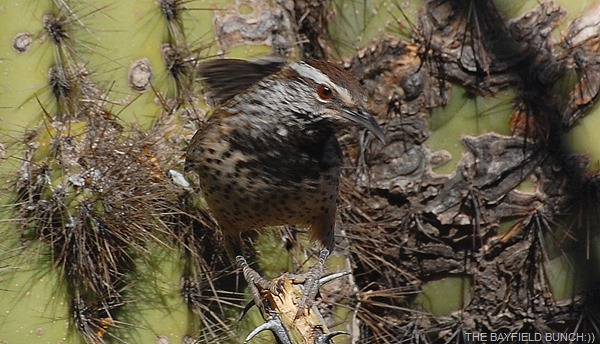 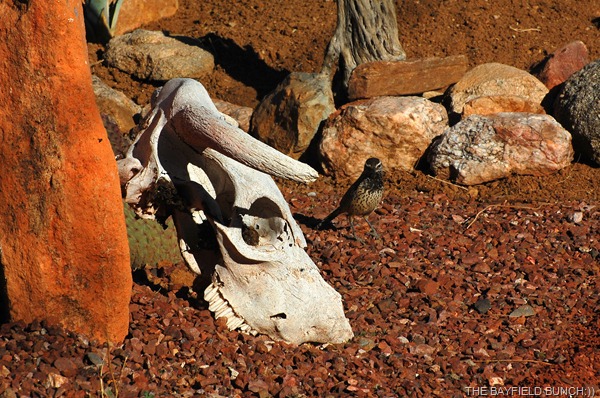 GROANER’S CORNER:((  How about some good old run of the mill zingers tonight………..
- He's the world's greatest proof of reincarnation-- no one could get that dumb in just one lifetime.
- She’s like yesterday's coffee -- a little weak in the bean.
-  He should study to be a bone specialist -- he has the head for it.
- He paid $500 to have his family tree re-searched, and found out he was the sap.
- The only time he thinks is in a poolroom, where he can rack his brains.
- Once he saw an old woman fall down, but didn't help her up. His mother warned him against having anything to do with fallen women.
- He's never bought Christmas seals --says he wouldn't know what to feed them.
- He called it quits when his fourth child was born, because he read that every fifth child born is Chinese!
- He jumped off the bus backwards when he heard someone say, "Let's grab his seat when he gets off."
Ok, that’s enough of that:((
-------------------------------------------------------------
- Tourists see the world, travelers experience it.
- Home is where your pet is:))
- "If having a soul means being able to feel
love and loyalty and gratitude, then animals
are better off than a lot of humans."
(James Herriot)
- The pessimist complains about the wind; the optimist expects it to change; the realist adjusts the sails -William Arthur Ward
- The only thing better than right now will someday be the memories of right now...AL.
- It is not so much having nothing to do as it is not having the interest to do something....AL.
Posted by Al Bossence at 1/22/2013