SPENT A LITTLE TIME WORKING ON MY FENCE PROJECT 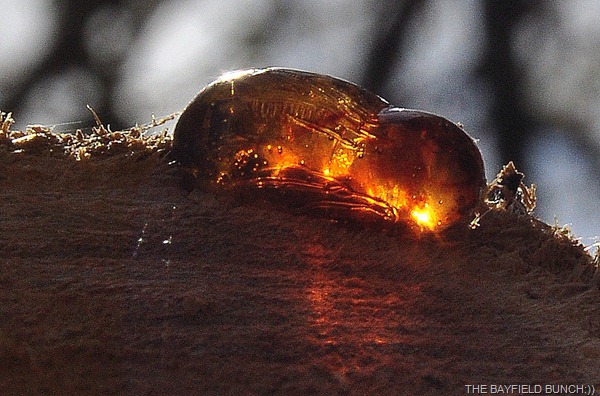 A TINY DROP OF BACK LIT AMBER COLORED SAP APPEARS WHERE I CUT A LIMB OFF A MESQUITE TREE A COUPLE WEEKS AGO…I SEE A TINY SLEEPING BABY HERE, HEAD ON THE RIGHT

Kelly brought a few more fence posts & rails back from Wickenburg today so I was able to work away a bit on the wood fence project.  Going to be a slow go.  Can only dig a few inches at a time in the hardened desert rock like soil.  Dig, fill the hole with water & wait for a few hours until it sinks in, then dig some more, add water…..etc. etc.   Kelly also tracked down a lead on where we might find some old railway ties so we’ll go have us a look shortly.  Those old ties make great flower bed borders.  That is if we can find them & wrestle a few into the Jeep. 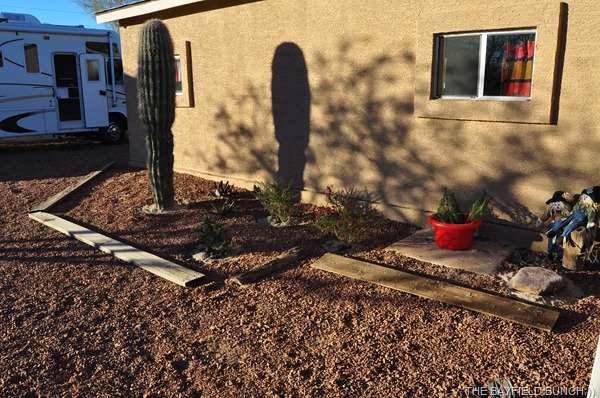 ROUGHLY LAID OUT A FEW PLANKS WHERE RAILWAY TIES MIGHT GO 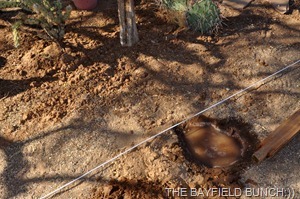 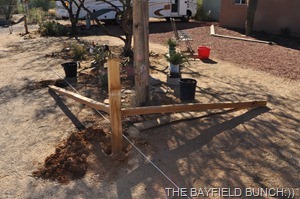 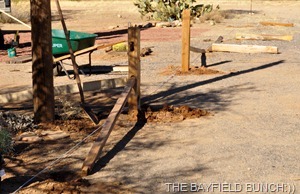 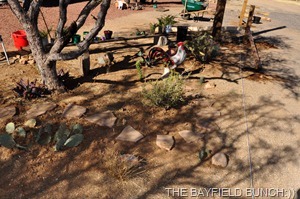 It was just over a year ago that we met Tioga George in Ajo, Arizona.  Probably the most well known RV Blogger on the Planet & we found George to be a soft spoken & gentle soul .  Had meant to post about our year ago meeting last week & forgot.  This is my post from that day, THE BAYFIELD BUNCH MEETS TIOGA GEORGE 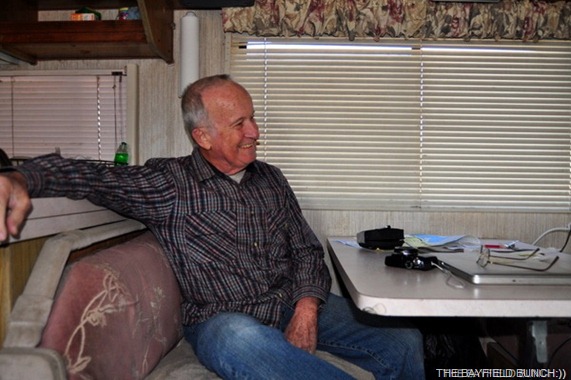 TIOGA GEORGE IN HIS RIG AT THE DINETTE TABLE

Had some more ‘Bird Of Paradise’ seeds so planted them around where our laundry water drains out into the back yard near the fence line.  Maybe they will have a chance there.  Hardest part of working with those seeds was that darn blasted song I couldn’t get out of my head.  You know the one, ‘May The Bird of Pickle Juice Fly Up Yer Nose’.  There, now it’s in your head for the rest of the day.  Sing it out & sing it loud:)) 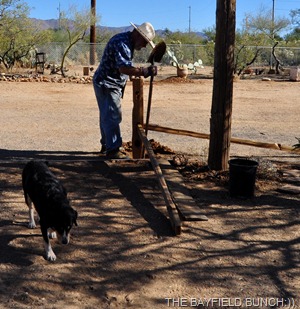 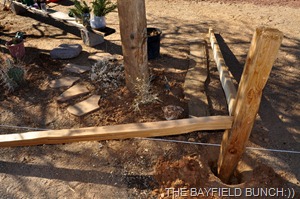 In Thursday night’s comment section, Mark over at BOX CANYON BLOG asked, “Just wondering what the elevation is of Wikiup and Hidden Oasis and how cold it gets there? I see palm trees so it must not be too high... but I would imagine it's cooler than Congress/Wickenburg”.  Ed, from the THE PEREGRINATING GRAYBEARD answers, “Wikieup 3,655', Congress 3,049' and Wickenberg 2,100'. Probably 3-4 degrees colder than Congress and 5-6 degrees colder than Wickenberg on average”. 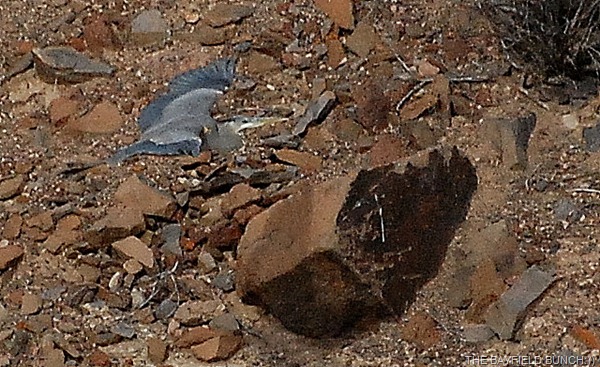 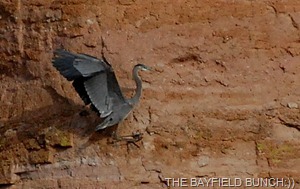 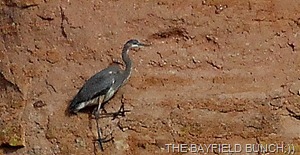 The flyboys were back this afternoon duking it up right over top the house at maybe 8 or 10,000 ft.  By the time I heard the roar, the first pilot had already dropped his flares, but I did manage a few quick one handed shaky 300mm shots of the second guy ripping through heavy on the throttle.  My other hand was busy shielding my eyes from the sun so I could see the fast moving planes. 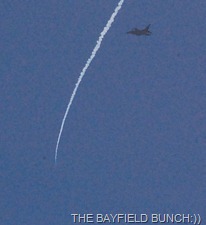 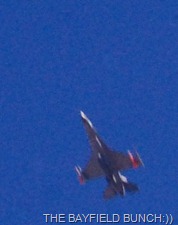 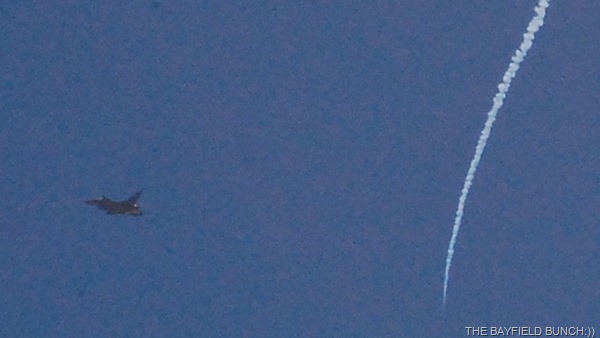 SANDY has joined us as Blog Follower 540.  Thank you for climbing aboard Sandy & we appreciate your interest in following the Bayfield Bunch. 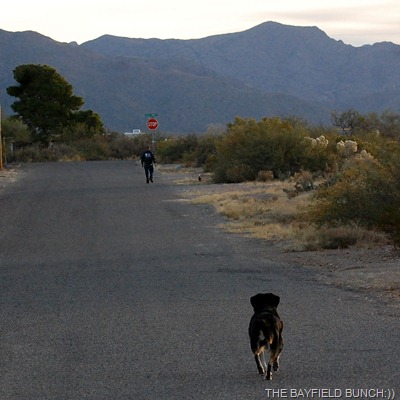 PHEEBS SPOTS HER LITTLE PAL PEBBLES UP AHEAD

And what were we doing one year ago today?  Well,  LOOKING FOR THE MICA MINE of course:)) 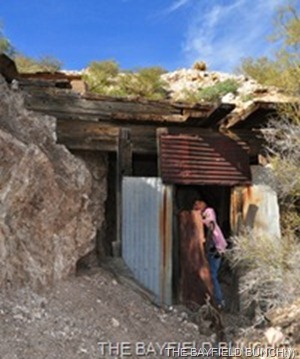 A few of our past Presidents found themselves following the famous Yellow Brick Road, on their way to meet The Wizard.
They were all missing just a little something and figured The Wizard could help them. They meet The Wizard and he asks each in turn what they need.
"Well", Jimmy Carter says, "I could use some courage." "No problem," says The Wizard, and Carter gets his courage, no questions asked. "What about you, Mr. Reagan?", The Wizard asks.
"If I only had a brain," Mr. Reagan replies, and voila, Mr. Reagan has his brain. George Bush is next.
"People tell me I could use a heart," he pleads, and The Wizard grants Mr. Bush his wish. "Tell me, Mr. Clinton, what do you most want?", asks The Wizard. Mr. Clinton doesn't hesitate. "Is Dorothy around?"