SHOULD WE BE THINKING OF A SMALLER RIG, MAYBE NO TOW VEHICLE……… 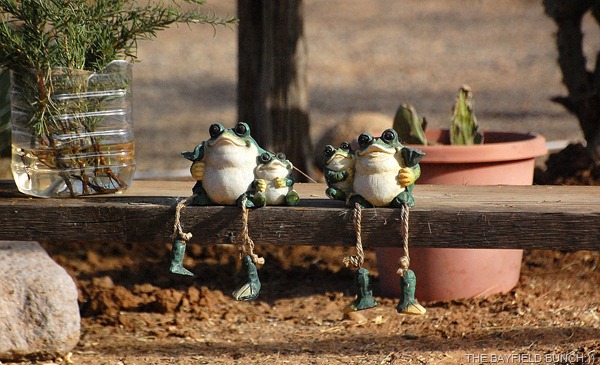 I OFTEN HAVE CURIOUS ONLOOKERS IN THE GARDEN

We had another Cactus pick-up this morning.  Jackie, from Elfrida’s Jackie & John had left a message on the phone saying she had some more Cactus to get rid of over at their digs on highway 89.  Didn’t take Kelly & I long to pile into the Jeep & head out on another Congress Cactus rescue.  Jackie had one big old Prickly Pear in a rustic pot plus 3 small Golden Barrel Cacti for us.  Also gave us a dozen Golden Barrel seed pods.  We have no idea what we’re doing with all this cactus stuff but we’re having fun learning. 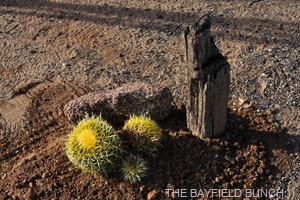 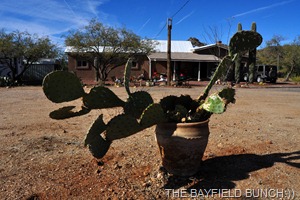 I have probably planted close to 50 or 60 Cacti sprigs this last while so it will be interesting next fall when we return, to see how many, if any, survived the hot Arizona summer.  Marge gave us bunch of ‘Bird Of Paradise’ seeds as well & I will plant them too.  Not too optimistic about their survival because they need water & we won’t be here for 5 months.  Thought of putting in a water drip line but Kelly doesn’t like the idea of leaving the water on when we are not here.  We have to pay for every drop of water we use & if a leak developed in the line somewhere while we were gone, our next Arizona water bill could wipe us out:(( 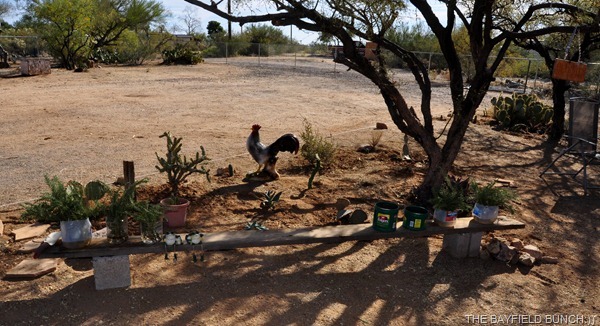 Kelly was off to Wickenburg again this morning looking for whatever it is that Gal’s look for.  I think we should have bought a place in Wickenburg.  Either that or Wickenburg should seriously consider moving it’s whole town here to Congress.  A lot less driving for Kelly. 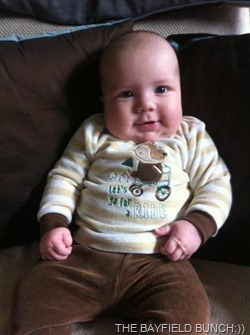 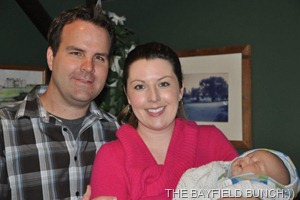 WOULD YOU BELIEVE I AM THIS CUTE LITTLE FELLOW’S HALF UNCLE??   YEP…..IT’S TRUE:))  THAT’S MY HALF BROTHER DAVE, WIFE NATALIE & THEIR SON, PARKER BOSSENCE

DONNA commented on a photo in my post Tuesday showing the ‘Have Gun Will Travel’ VCR jacket beside our Boombox.  Yes, it was Richard Boone who once played the character of Paladin.  Below are a couple photos.  The one on left shows Richard Boone standing in right foreground & Randolph Scott sitting by a campfire.   Scene is from ‘The Tall T’.  Photo on right is my photo of where I think the same spot that movie location photo was taken.  My white Cowboy hat on the ground is about where I figure Randolph Scott was sitting beside the campfire.  Location is the Alabama Hills west of Lone Pine California & you can read my post about the day I took that photo…. IN SEARCH OF RANDOLPH SCOTT'S CAMPFIRE. 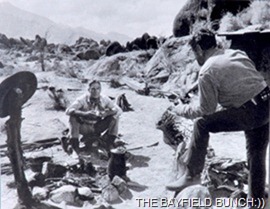 Fired up the rig a couple days ago & let it run for a bit.  While sitting there I turned on the radio & hit the seek button.  Found 7 FM stations……all in Spanish!!!!  Not one  single English speaking radio station did I find.  Not one!!  Why is that??  We are 75 miles north of Phoenix Arizona & all’s we can get is Mexican stations.  Something not right here & it’s not the first time we have noticed this in southern parts of the south-west.  Thank heavens we have Sirius Satellite Radio. 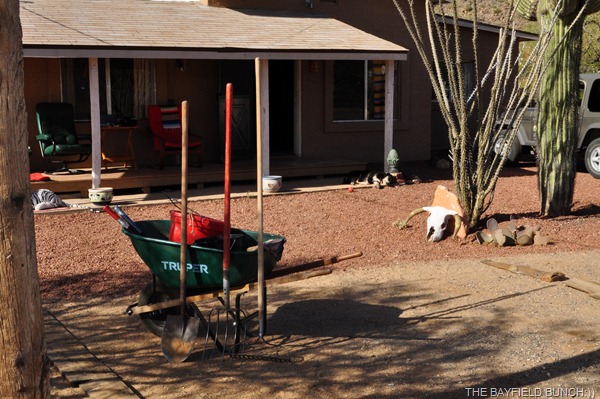 Now that our winter RV lifestyle has changed a bit, we are looking down the road a tad & asking ourselves some travel questions. Last March we began thinking of a cheaper mode of transportation between Bayfield Ontario & Congress Arizona. Thought of a few alternatives but weren’t sure at the time because it was too early & we hadn’t even spent a night in the house yet. We have been here over a month now & it looks like we are here to stay for a few winters to come. 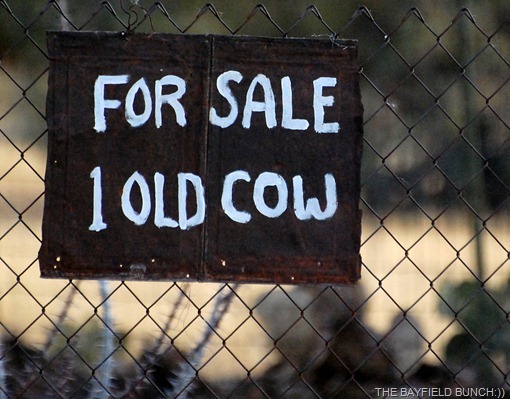 Eight months ago we were thinking along the lines of selling or trading the Motorhome in on a small trailer or something we could pull with the Jeep. A bit of research soon made it clear we were not going to tow anything much larger than a utility trailer with a Jeep Wrangler. We like our Motorhome a lot, it runs great & has served us well. It is also nearly 10 years old. If we are not going to be boondocking for 5 or 6 months at a time, do we really need a 33 foot Motorhome? How about a smaller Class C or a Class B? What about a truck camper? If I was traveling alone I would consider all those but there are 3 of us so I don’t think we would be comfortable with anything smaller than a C. But, it’s all just a thought so far. 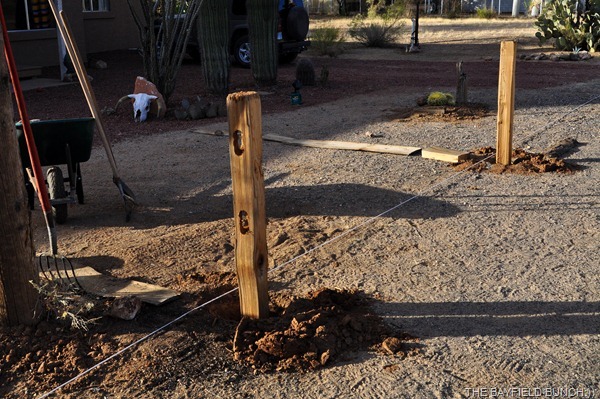 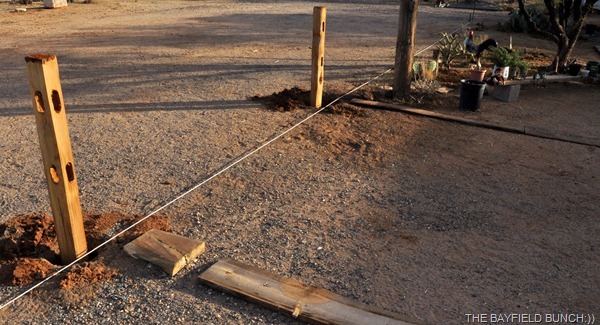 We ask ourselves, is a small Jeep Wrangler the best vehicle for us now here in the southwest…& our answer is, ‘not really’. Would it be more practical to bring our Santa Fe next year instead of the Jeep? Yes it would. Way more room in the Santa Fe, comes complete with a full back seat & large hatchback cargo area. Nicer for the Pheebs. My heart loves the little Jeep to bits but my head says, ‘whoa there, not practical’. Our Santa Fe still has it’s tow plate on so we could easily hook it up & bring it along behind our rig. Maybe sell both the Jeep & Santa Fe & pick up another Mini-Van, which to me is the most practical multi purpose vehicle on the road. Not so good for towing though. Maybe do the trips between Ontario & Arizona with the mini-van. Maybe not. I think we better keep the Jeep.  Lots to think about this winter. Lots of things to consider. Not a lot of time for boredom. I like that:)) 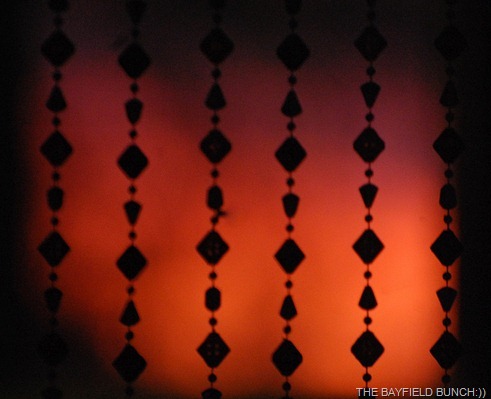 OUR BEADED DOOR BACKGROUNDED WITH AN OUT OF FOCUS ARIZONA SUNSET

GROANER’S CORNER:(( There were these two guys out hiking when they came upon an old, abandoned mine shaft. Curious about its depth they threw in a pebble and waited for the sound of it striking the bottom, but they heard nothing. They went and got a bigger rock, threw it in and waited. Still nothing. They searched the area for something larger and came upon a railroad tie. With great difficulty , the two men carried it to the opening and threw it in. While waiting for it to hit bottom, a goat suddenly darted between them and leapt into the hole!
The guys were still standing there with astonished looks upon their faces from the actions of the goat when a man walked up to them. He asked them if they had seen a goat anywhere in the area and they said that one had just jumped into the mine shaft in front of them! The man replied, 'Oh no. That couldn't be my goat, mine was tied to a railroad tie.'