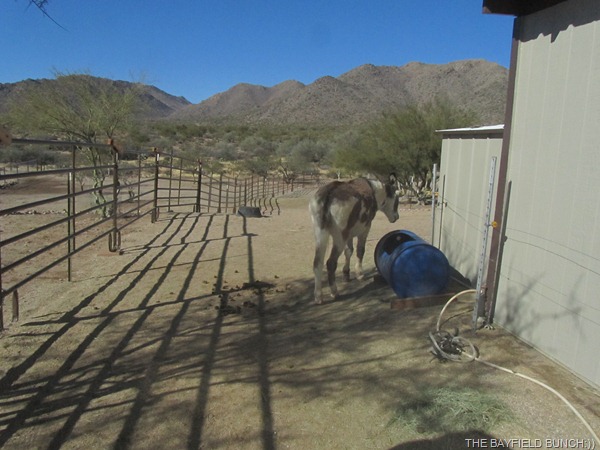 KELLY DOES MOST OF THE WORK BEHIND THE CAMERA TODAY & THIS IS BURRITO THE BURROW
‘Yousa’, only 1 degree above freezing this morning when I took Pheebs out about 5 a.m.  Rained a bit in the night so imagine there may have been some icy roadways at slightly higher elevations.  And, wouldn’t you know it…..because I posted Tuesday night that we haven’t had any winds around here since arriving on November 1rst, our lawn chairs were tipped over this morning, outdoor mats were blown up & we had a brisk north wind rumbling through the neighborhood giving us a wind chill factor somewhere in the mid to high 20’s.  It was a freezing fast walk around the block this morning holding my cowboy hat on with both hands.  But hey, all the heavy laden gray clouds were gone & we had us a big bright happy sunny Arizona day going on….even if we didn’t get over 45F:((
---
I have known people who are not at all affected by weather.  Mainly ‘inside’ folks they are, & I doubt many of them could give a hoot, or would even know a sunny day from a cloudy one.  Some of us, like myself, are sunshine folks.  Didn’t grow up with that intent in mind, just sort of evolved that way.  Like others, my moods are many times affected by the weather & I would not do well living in England or along Canada’s West Coast with their often dull back to back days of cloud & rain.  Arizona suits somebody like me just fine for the winter.  Well, most days anyway.  ‘Brrrrrrrr’ 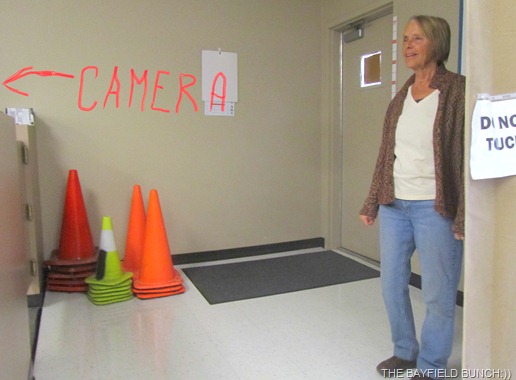 AND, THIS IS KELLY POSING FOR HER ARIZONA ID CARD PHOTO ON TUESDAY
On our Sirius Satellite radio I like the newer ambient versions of old Christmas Carols.  No words, but the carols are recognizable & I like the new arrangements & instruments used.   I do still like some of the older standard vocals by Bing Crosby, Nat King Cole & Andy Williams.  It is those old chestnuts which bring back happy childhood Christmas memories for me.  It was the age of Peter Pan, Alice In Wonderland, Santa Claus, the Easter Bunny, Wise men & Manger scenes, Walt Disney’s Cinderella & Snow White.  An age of innocence & wonder.  The age of imagination.  I haven’t lost that imagination, but I haven’t let it cloud my grasp of reality either.

OUR MEXICAN NEIGHBOR’S CHRISTMAS LIGHTS
A neighbor from down the road dropped in to say hello this morning.  Jerry & Caryl are old Montana rancher friends of JANNA & MIKE'S & Jerry dropped in on his way home.  Caryl was teaching a quilting class today so Jerry said for us to drop over after lunch.  From our place to Jerry & Caryl’s place is less than a mile.
---
We got to meet Burrito the Burro & her best Pal, Dusty the horse.  They are both 29 years old & Jerry was in the process of giving them both their daily meds.  Also got to meet quarter horse Nina which Jerry has had about a year.  Jerry took her in after she threw her 85 year old lady owner for the second time a year ago.  That same lady, after recovering from her injuries, was just re-injured again when out for a ride (on a different horse) with a ladies riding group in Wickenburg.  Unsaddling her horse, it expectantly moved, knocking her to the ground breaking her arm above the elbow.  She is now in the process of recovering all over again.  They sure make the western Gals tough here in these parts. 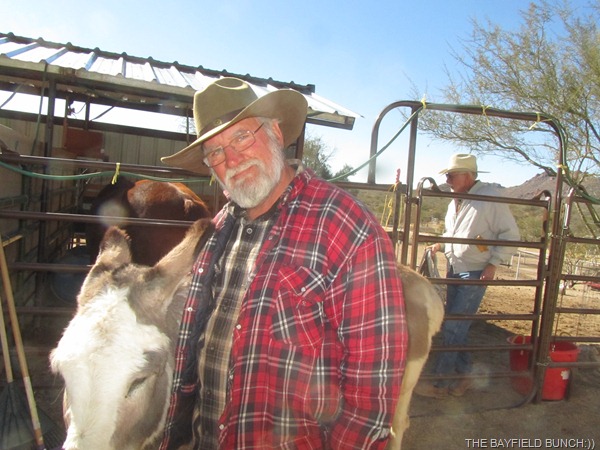 THAT’S JERRY IN THE BACKGROUND
Jerry’s a knowledgeable fellow so Kelly & I were able to gather more information about our area plus some of Jerry & Caryl’s hobbies. 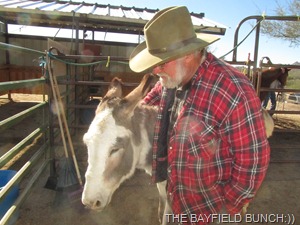 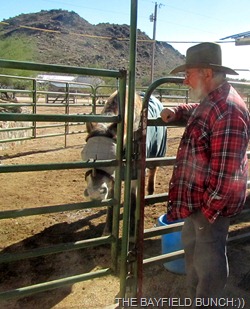 CONVERSING WITH BURRITO & HAVING A WEE CHAT WITH DUSTY
Finally got hold of a roofing company in Wickenburg & the fella will be around Thursday or Friday to have a look at the section of roof we are having a water problem with.  It’s a shingled section & the only part of the roof that isn’t steel.  At home in Bayfield we had a new steel roof put on our place about 8 years ago.  Not likely we would ever consider putting shingles on a roof so we’re thinking the best way to solve this leaky roof thing is to just simply put steel over top that shingled section & be done with it. 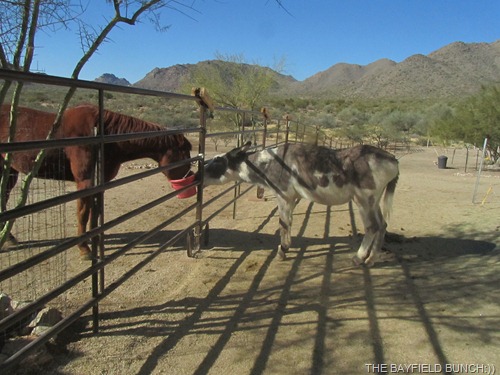