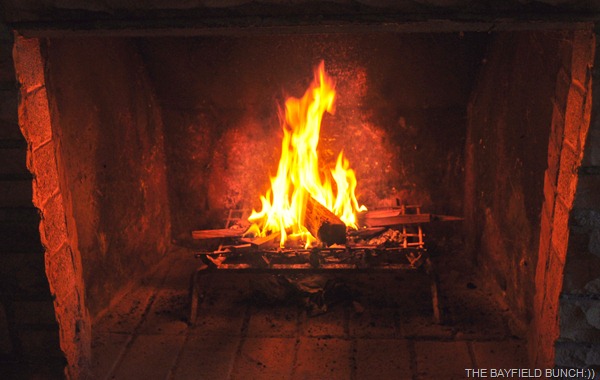 A WARMING FIRE IN OUR FIREPLACE TONIGHT

At 34F we had our coldest morning so far since arriving over a month ago.  A gusting north wind late Sunday afternoon brought in colder temperatures.  And, it also toppled our garden’s Cactus Man.  Found him in disarray, lying on the ground this morning, but I was not surprised.  I knew when I set him up with a few pieces of scrap wood & a big rock last month that he was very precariously balanced & probably would not stand up to any kind of abusive Arizona wind….& he didn’t.  I rebuilt him today & took the time to make him more secure.  Gave him a new set of stronger hips is what I did, & carefully this time is how I dids it:)) 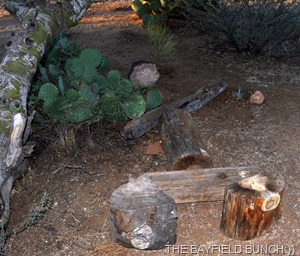 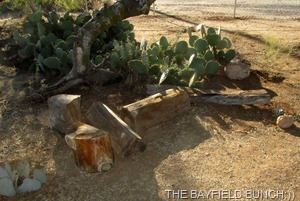 Haven’t had the Motorhome on the road since arriving here back on November 1rst.  Time to make sure we hadn’t fenced the rig in.  Our new fence wasn’t here when I nosed the rig in beside the house last month.  But, no problem.   I backed it out, swung it around making a sweeping right turn out our gate onto Ghost Town Road & headed on down to a small garage in Congress.  They work on Motorhome stuff there & we still needed that gray water valve re-installed.  I tried to do it but ended up running out of patience.  Took the guy (using the right tools) about 20 minutes to re-install the valve with new seals & we were good to go.  A job well done for $20.00……& that included the new seals.

Very discouraging to find more & more of our newly planted Cactus chewed off each morning.  Seems to be a certain kind of Cactus the Rabbits or Pack Rats favor.  Just not practical to put metal cages around them.  And, probably more practical to not plant any more of that animal attractive Cactus.  Kelly did put some moth balls around some of them this morning so we’ll see if that helps.

I have come to the conclusion that my legs have simply aged much faster than the rest of my body.  I first became aware of leg problems about 5 or 6 years ago & they have slowly but steadily declined ever since.  I have the hands, wrists, arms & shoulders of a 68 year old or younger man but have the legs of a an elderly fellow in his 80’s or 90’s it seems.  I don’t have the spring in my walk anymore & I notice myself moving much slower due to the ever increasing stiffness.  Harder to get my right leg into or out of the Jeep & it pains me every time I get out of a chair.  Tried a little rock scramble this morning but had to go slow.  No springing from rock to rock anymore.  Kind of discouraging.  Can’t stand for long periods of time or walk the same long distances I could just a year or two ago.  Not complaining, just sharing some thoughts.

For me, it is sometimes uplifting to read of other peoples difficulties.  It always assures me I am not alone & not the only one who has problems with mechanical & technical things, etc.  Case in point…..Check out SASSY'S ON 'DA ROAD.  Many, many, times I have said the very same words to myself as Sassy said to herself while attempting to do something….'It wouldn’t be me’!!

Here in the heart of Arizona’s gold country we have a lot of prospector type people out in the desert every day looking for gold.  I find this whole gold thing annoying because every time I dig one of my post holes, I am slowed down by these big pesky gold nuggets I have to pry out of the hard soil.  Some of them are so heavy I have to get Pheebs to help me lift them out of the post holes.  Had so many of the darned things laying around I loaded them in the Jeep today & took them to the dump.  Texas isn’t the only place for long tall tales you know:)) 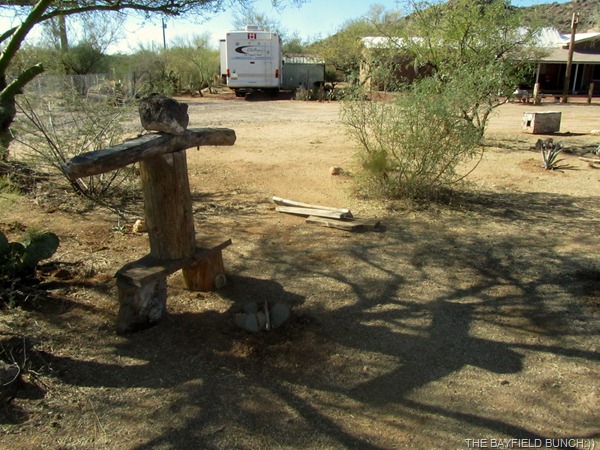 GROANER’S CORNER:((   A Lutheran minister is driving down to New York to see the radio show and he's stopped in Connecticut for speeding. The state trooper smells alcohol on his breath and then he sees an empty wine bottle on the floor, and he says, "Sir, have you been drinking?"  And the minister says, "Just water."  The sheriff says, "Then why do I smell wine?"
And the minister looks down at the bottle and says, "Good Lord, He's done it again!"